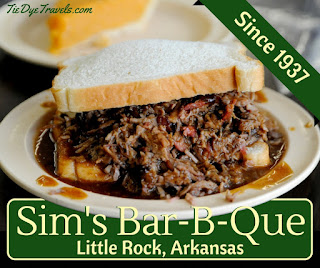 Established in 1937, some would argue Sim's sauce is the particular flavor one should consider when thinking about barbecue in Little Rock.  Known for fall-apart pork butt, pork ribs and beef brisket, it’s the thin and tangy sweet vinegar sauce that makes this mainstay so memorable.

I know, I have shared this story before, back to my first days of articles on Tie Dye Travels... but it bears some repeating.

The very first barbecue I can clearly remember came in a paper boat wrapped tight in two layers of aluminum foil and a paper sack, with a wax paper wrapped stack of white bread.  The sauce was tangy and thin and it left an indelible mark on my tongue.

That flavor, that scent and that experience were all part of growing up, whether it was my mom picking up a pound for a weekday dinner or grabbing a sandwich while out on Geyer Springs road.  It’s the flavor of a slice of white bread that’s been used to mop the last of that thin sauce out of the bottom of that aluminum foil.  It’s the flavor of Sim’s Bar-B-Que. 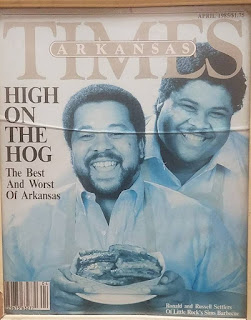 Allen and Amelia Sims started the place back in 1937.  It wasn’t much, just meat and sauce and white bread and later beans.  Later they sold to Ron Settlers, who incorporated the business.  And it grew.  It grew from 33rd Street to Barrow Road to Geyer Springs Road. The locations thrive for the same reason I still visit.  That flavor, unlike any other Arkansas barbecue joint’s sauce, is unique.  It’s just a few herbs and some sweetener, I am told, but it’s more than that and everyone knows it.  It’s thin like Carolina barbecue but sweet instead of bitter, a strong flavor of vinegar throughout.  And when no one is looking, when the meat is gone from that aluminum foil I have been known to lick the package clean.

I even stuck to that flavor in high school.  Sim’s happened to be at the time the closest restaurant to Parkview Arts Magnet, and once I learned to drive I became a regular. 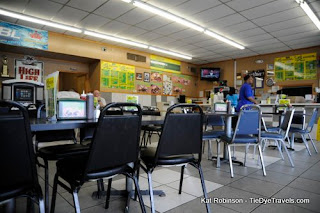 I’m a long way past childhood, and Sim’s is a long way past its beginnings, but it’s still around and still going strong.  I’d get my sandwich with slaw, as God intended, on the white bread rather than paying extra for a bun.  Walking in today, some two and a half decades since my graduation, the place is the same – except now there are plaques from some of the guys I went to school with, former Parkview Patriots who became Arkansas Razorbacks and a few of which went on to the NBA.  There’s a photo there from Air Force One, and whatnot.  And the preferred brew for the average diner seems to be sweet tea or a cold Miller Lite. 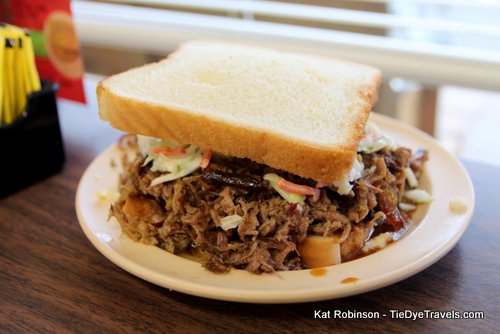 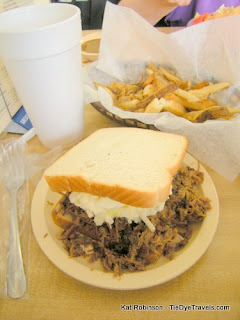 I usually get a brisket sandwich when I go. It's served on white bread, with or without slaw, and with a fork. The last item is crucial - Sim's thin sauce is strong on the pungency front but as far as bread is concerned, it's a disintegrating agent. The sandwich is too much for one sitting for me, and I rarely get a side item any more because of that. It's just... powerful. These days I tend to take home a pound and a half loaf of white bread instead. 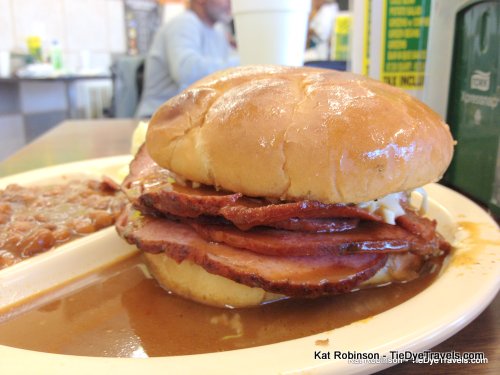 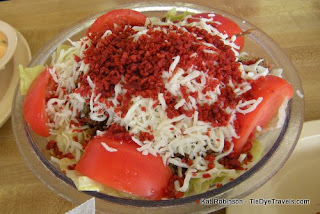 There's also a beef bologna sandwich, cut from a log smoked with the other meats, sauced strongly. Once again, the fork is the key to enjoying the mass.

There's a salad, though seeing someone order the salad is rare. The salad is pretty much iceberg 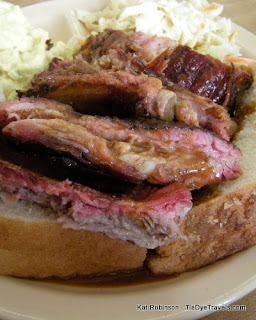 lettuce covered in bacon bits and cheese shreds with a few chunks of tomato to spare and dressing from a packet.

And there are ribs, which Grav swears by, suck-off-the-bone ribs that barely require chewing.

I hear there are also hamburgers, though in my lifetime of eating at Sim's I cannot recall either enjoying one myself or seeing someone else eat one. I have had the amazing smoked chicken, but I have no photos of such. 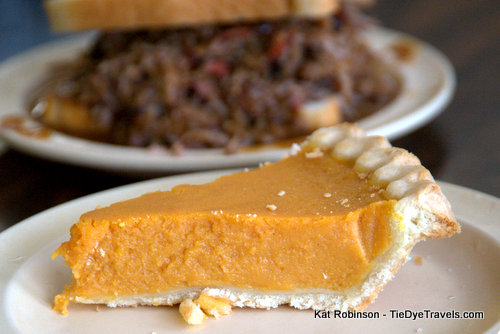 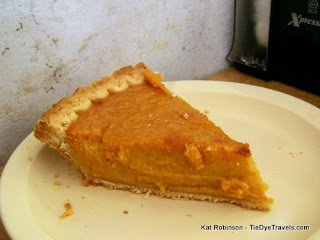 Like everything else Sim’s does, the recipe for the sweet potato pie they offer is a secret.  I know it’s made by Percy Walker and by members of his family. Percy still has the Barrow Road location of which I speak.  Now, I have had more than my share of sweet potato pies over the years, but this one is different.  It’s spicy.  That’s right.  It has a whole lot of spice to it.  It eats like a savory, almost, with just enough sweetness to call it dessert.  Smooth as custard.  And it’s not dolled up with whipped cream or ice cream or any of that nonsense.  Best of all, the pie has essentially remained the same over the past several decades -- a spice-packed smooth concoction packed into a simple flour crust.

Why it goes well with barbecue, I may never really know.  But this specialty is a good one to counteract the astringently pungent and sweet barbecue sauce that soaks every slice of white bread that barbecue comes into contact with.

For more information, check out the Sim's website or visit one of the locations below. 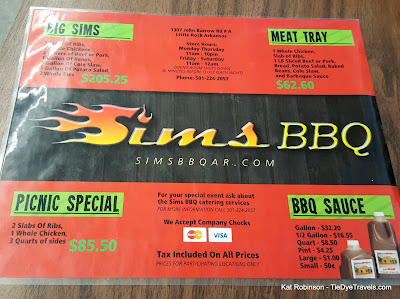 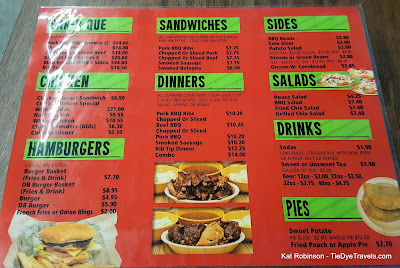