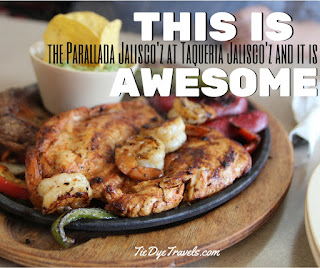 I kid you not - I went, I experienced, I enjoyed and now I have no clue what happened to my scarf after experiencing this Little Rock Restaurant Month special at this Baseline Road taqueria.

I've taken the Southwest/Airport week of the promotion as an excuse to experience all the wonders Southwest Little Rock has to offer. After all, these are my old stomping grounds. I went to school at Geyer Springs Elementary, grew up off Gum Springs Road, once lived in apartments off Baseline and spent most of our shopping trips in my youth in this area of town. I clearly remember times spent at Southwest City Mall and the UA Four, skating at Eight Wheels and shopping at Kroger at Baseline and Geyer Springs. Heck, I still sometimes go Krogering there.

The demographics have certainly changed in the past 25 years. A large percentage of Arkansas's growing Latino population now calls this district home - and with those young entrepreneurs comes a whole new wave of Mexican cuisine, translated for an Arkansas audience. Today, you can experience food from Veracruz and Yucatan to Baja and even Jalisco.

I would not for a second presume to be an expert on Mexican food. My friend Capi Peck is far better versed and I notice she doesn't lump all Mexican food together. To me, now that I have started to educate mysef on the differences, it'd be like asking someone from London about American food and being told burgers and hot dogs - that'd be ignoring New Orleans jambalaya, Chicago deep dish pizza and of course Arkansas cheese dip.

I've dived into several south-of-the-border restaurants these past few days - from Eliella Restaurante and its fabulous Flan de Queso to Mariscos el Jarrocho's carne asada, from La Frontera's Tex-Mex to Mama Tana's Salvadorian cuisine - El Salvador being an entirely different country from Mexico (a surprise to a couple of people I talked with earlier this week). The culinary palate of Southwest Little Rock today is diverse and, honestly, gorgeous. 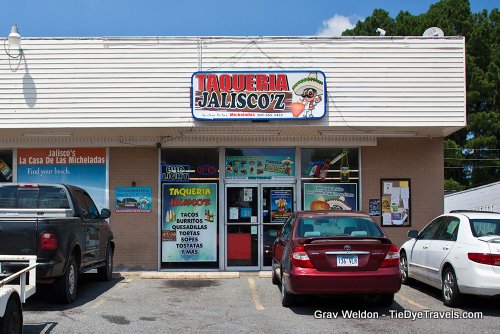 Grav and I went after that Parallada Jalisco'z at Taqueria Jalisco'z just because it was the special for Little Rock Restaurant Month. We went on a Tuesday afternoon. We entered, were waved at to take a seat of our choice, and sat. There were two other patrons in the front dining room at the time, and one of them went to the bar in the other dining room - I'm guessing to start the jukebox. The other gentleman for some reason gave, I kid you not, a cry of "AYE-YI-YI" when the music started playing, and Grav started bobbing his head. I don't think that was the intended reaction. 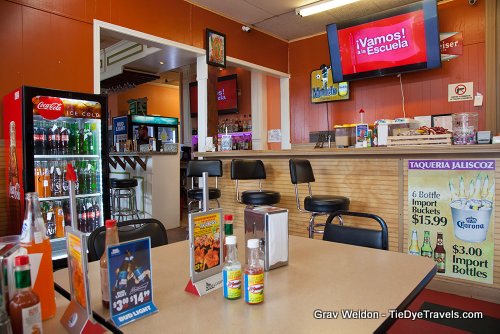 Grav is very comfortable in these situations - he spent a lot of time with friends from Chicago's Latino community while he was in grad school. It may be why he often looks over his glasses at some of the Mexican fare we've received at other restaurants.

We were given menus, and I noticed the parallada wasn't in those pages. I showed my phone with the DineLR.com website up and she nodded, and she took Grav's additional order when he pointed to the different items on the page. There was a language barrier. That's all right, too. 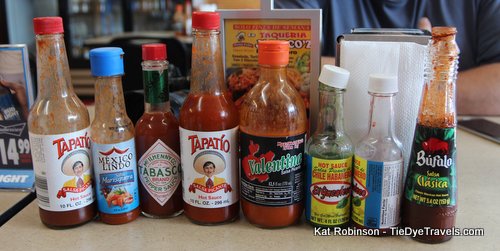 While we waited, I savored a Fanta and we talked about our assignments, Pokemon Go! and what else we planned to accomplish this week. It was probably a good ten to fifteen minutes before our food was brought to table, but I wasn't really concerned. We had budgeted for this time. We talked about all these crazy sauces on the table. 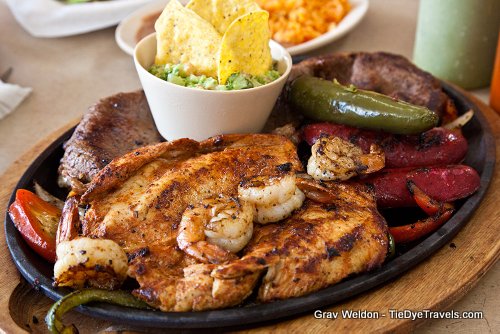 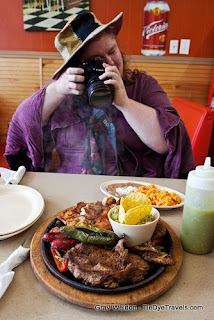 It came all at once - a hot sizzling plate carefully placed between us, followed by a separate platter of rice and beans, a roll of flour tortillas and two separate plates, each one with a different taco Grav had ordered. The cast iron flat in front of us sizzled and popped as we gaped at it, before raising cameras and phones and documenting it all. 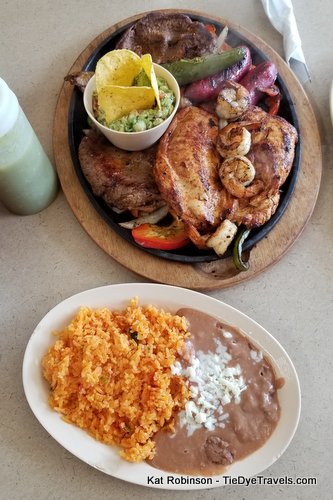 well, it was a bit more than we had expected. I've had paralladas before at other places that cost $20-30 and few have been this complete. Atop a bed of still cooking onions and peppers we discovered two flat beef steaks, a butterflied and seasoned grilled chicken breast, four shrimp, two sausages and a bowl of fresh made guacamole.

Once our photos were done we went to serving ourselves from the glistening-hot skillet. The beef was thin but robust, lightly seasoned. The chicken had apparently been marinated in spices and had a remarkable amount of flavor. The shrimp were... well, gone quickly, they were easy and delicious to eat and just evaporated. 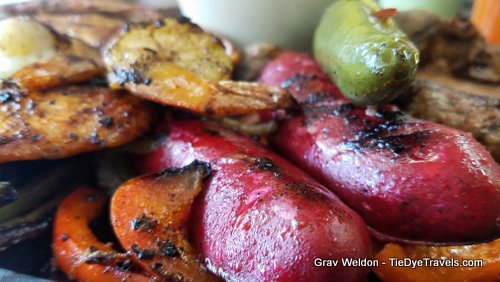 I didn't try the sausage because I had no clue what was in it - and the language barrier was an issue. Grav pointed at the sausage and asked our waitress what was in it. I think that panicked her a bit - she went to the back and returned with the chef, who explained that it was a blend of chicken, beef hearts and pork. He showed his approval with two thumbs up and a nodding head and a big silly grin. 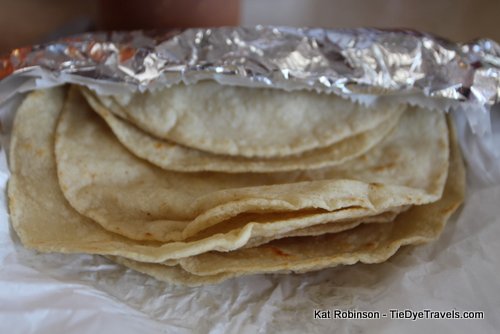 The corn tortillas were small and handmade - maybe from the restaurant or perhaps from one of the local tortelliarias nearby. The onions and peppers... okay, I ate the tar outta those, because I love onions and peppers, okay? And the fresh-made guacamole was of the chunky, diced sort - not overpowering with lime juice and whatnot but full of good avocado flavor. 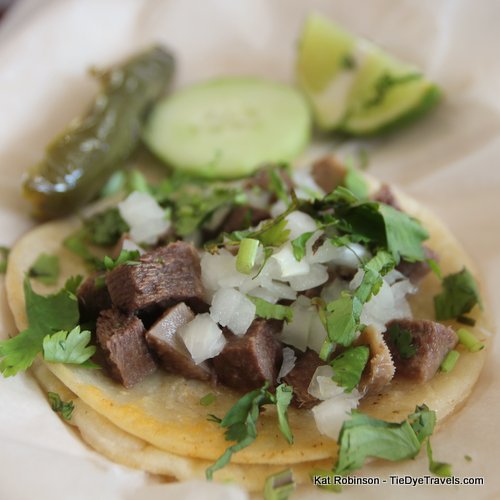 Grav's pair of tacos were just adorable. Each had come with two smaller tortillas  The lengua taco was of the cubed and fried style, and was pretty tasty. It came with raw onion and cilantro on it and a roasted pepper, a chunk of raw cucumber and a lime slice. 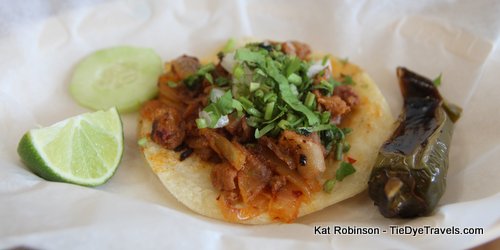 But the one he liked better was the pork rind taco - which Grav says was really, really good. In fact, he told me when he goes back this is what he'll order - maybe in a burrito, but definitely the pork rind. It was heavily spiced but not super hot, with plenty of chilis in the mix. It was also butter-tender.

The rice was another thing I really liked - a good Spanish style rice that was actually sorta sticky, like sushi rice but with a lovely butter-tomato flavor. The beans weren't all that distinctive but they were pleasant. 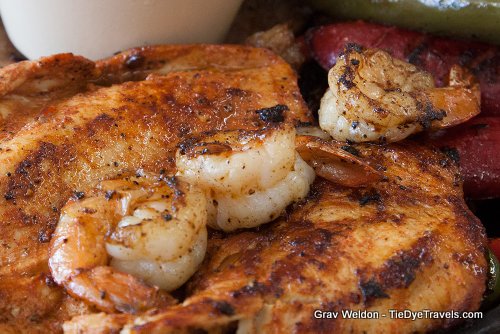 This was an excellent meal for the two of us - actually, for the three of us, since Hunter took part in the bounty we took home with us. The entire meal cost $24 before tip - including Grav's two tacos, the parallada, my Fanta and his Sangria Senorial. It's a remarkable value.

I managed to make it home before I realized my scarf was gone. It had been tied. It just evaporated from the sheer awesomeness, I guess. 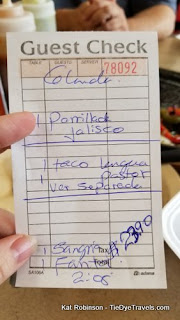 We have to come back. Between the photos on the menu, the posters on the wall and the images on the restaurant's Facebook page, we figure this has to be an excellent drinking establishment, with so many different food-and-drink concoctions. Go take a look and see what we mean. I think we're going to have to get a party together to do a bar run in Southwest Little Rock at some point, between this place and Eliella Restaurante and El Alamo and Mariscos el Jarrocho. Oh yeah. I'll designate drive the heck out of that.

I did notice on our leaving that there's a La Michoacana in the next strip mall to the west - and I am so craving Mexican ice cream. Soon.

For right now, though, get over to Taqueria Jalisco'z and get the parallada or one of the many other specialties. I'm still craving a second visit. Call (501) 565-3433 or visit at 5412 Baseline Road in Little Rock. 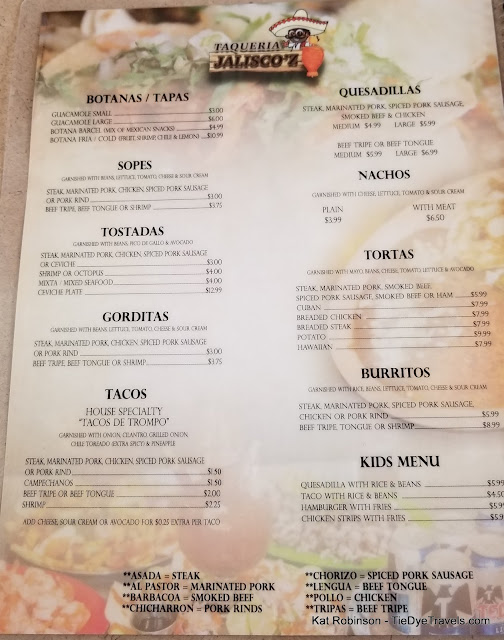 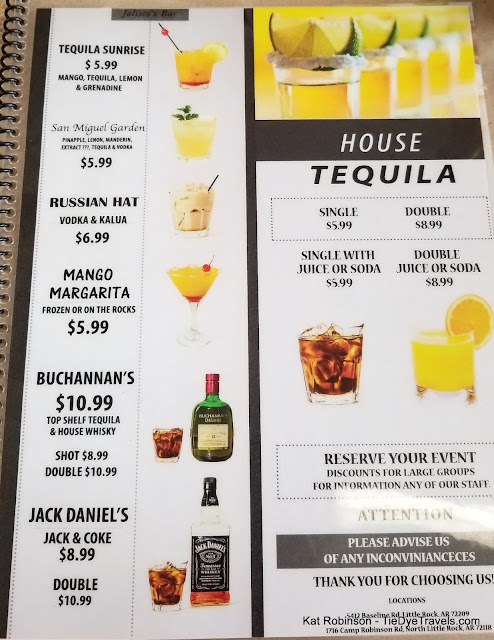 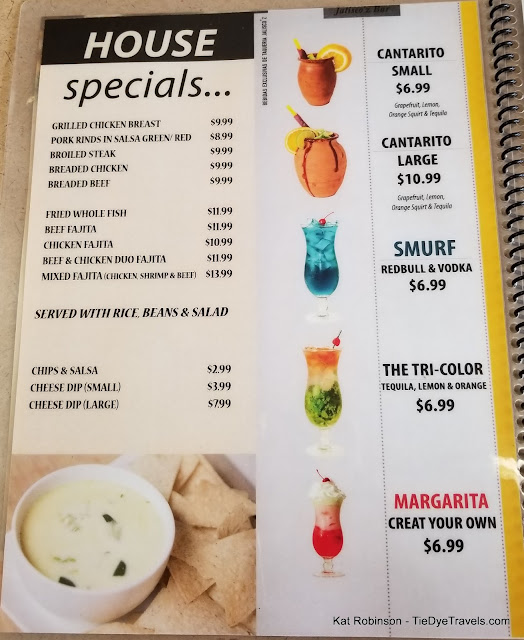 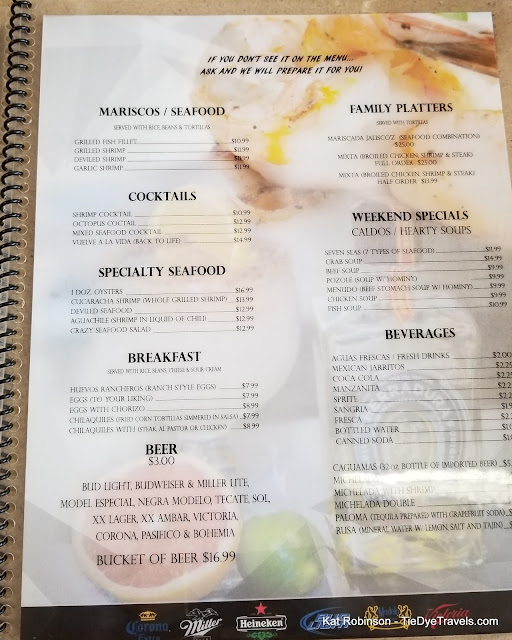 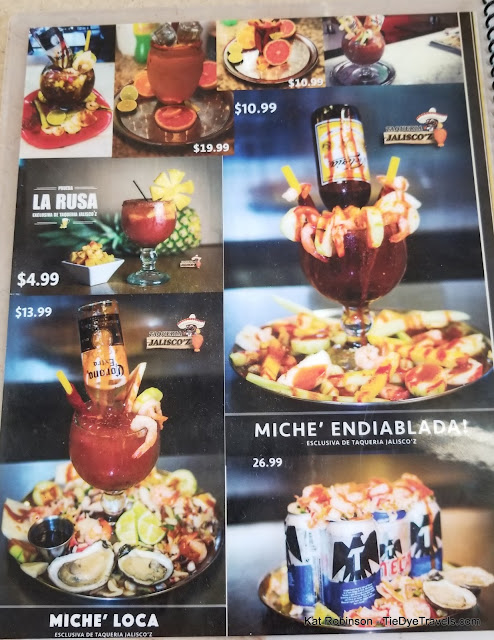