Flipping Over to the B Side Again in Little Rock. 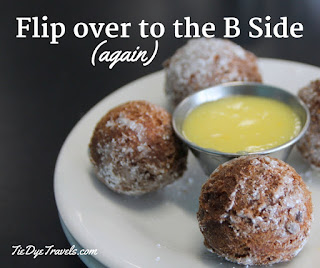 I can't say I've written about this B Side Bistro before. Sure, there was a restaurant of that name here at one point, and it was dear to me. What I encountered this time was pretty solid and showed lots of promise, but is it the same? Not in the least.

That's not to say that there aren't some similarities in the menu. Items such as beignets, Biscuit Mountain and chicken and waffles first appeared on the menu at B Side when it opened in February 2010. But...

As Grav told me as we sat in the empty restaurant the other morning, "the soul is gone."

And that's a real shame, because this B Side still deserves to make it, even if it's not the same place.

I've shared the story before - about Nancy Tesmer and Jeffrey Moore's venture into breakfastland in a time and place where local breakfast efforts were few and far between. The restaurant's opening dovetailed with my own search for great Arkansas breakfast for what would culminate in a cover story for the Arkansas Times in November 2010. It was a very, very close thing to decide between B Side and my other morning favorite, Ashley's at the Capital. The latter evolved itself in 2014 with the introduction of Chef Joel Antunes and the new One Eleven at the Capital.

And as a customer, I kinda feel responsible for the disappearance of the original B Side. Nancy sold the restaurant last November. There were factors both within the restaurant scene and within her own life, bless her heart, and I feel like a cruddy friend for not paying more attention that final year. Life got away from me, but that's no excuse.

And to be more exact, Lilly's Dim Sum Then Some and B Side were a package deal, and both closed. The space that held B Side before is now the kitchen for Clean Eatery's delivery only operation. The Lilly's space is what's been converted to the new B Side, and what a location - a lovely patio out front, cheery beige and blue walls within. It deserves a chance. 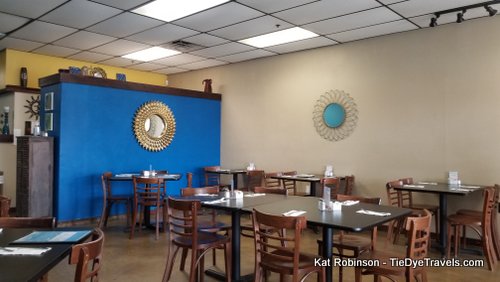 That's what Grav and I were doing this particular Tuesday morning. We were taking advantage of Little Rock Restaurant Month's specials in reacquainting ourselves with many of the city's best eateries, and I was anxious to go dine there. Our arrival around 10:30 in the morning was met with a smile by the lovely gentleman within, but there was nary a customer in the establishment and few cars in the lot.

It was Tuesday morning.

Grav and I pored over the menus and ordered and chatted for a while over things new and old. The music was putting him off a bit. It seemed strange, where Lilly's had such beautiful understated downtempo music and B Side's music never really crossed our minds, to hear the hits of the 1950s overhead as we waited patiently for our brunch.

We did chat with the gentleman, who turned out to be Tom Fuge, who bought the restaurant with his wife Barbara. Tom and Barbara, from what I had gathered, had been customers of the former restaurants for some time. They're from California.

I found out later through a little research that Jeffrey Moore briefly returned to run the kitchen, but he soon left for other opportunities.

It was just... odd in this space. No one coming in. We could hear sound from the kitchen and we both chatted about stuff but the wait... was... considerable. 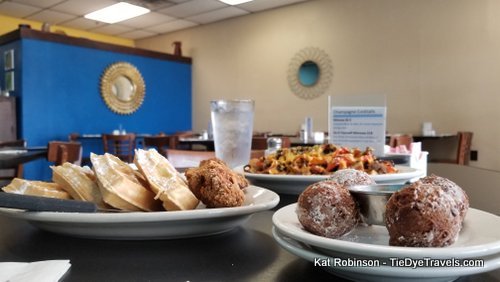 And then when our plates arrived, they arrived all at once, providing us with shooting possibilities galore. Immediately I had the sensation that these were entirely different dishes. 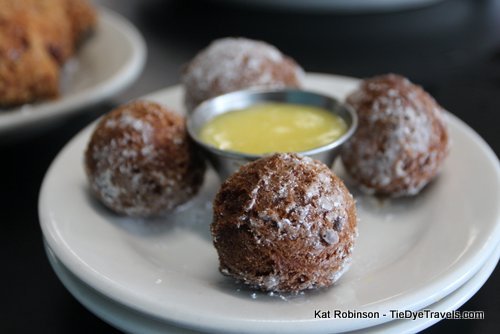 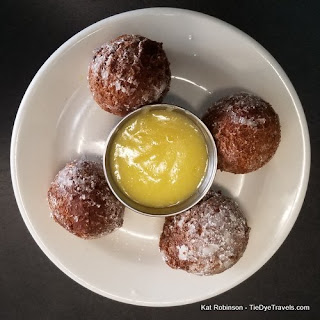 Let's start off with the beignets. Originally lightly tanned bits of dough, these were more the consistency of hush puppies. Mind you, they were sweet, and Grav compared them to cake doughnut holes, but they were... not what I had expected. The lemon custard alongside was marvelous (Grav ended scooping the last of the custard before we went. I'm just glad he didn't lick the ramekin). 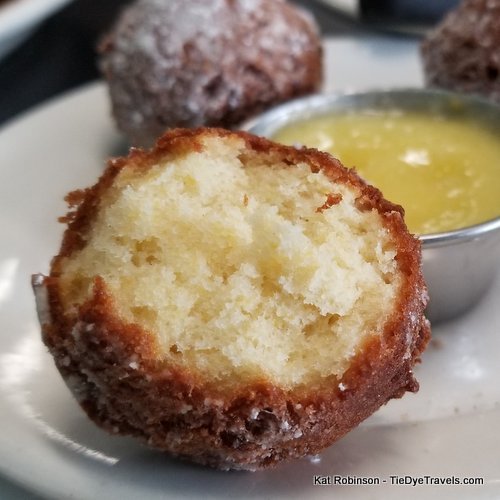 Not that they weren't gorgeous. They were just different. 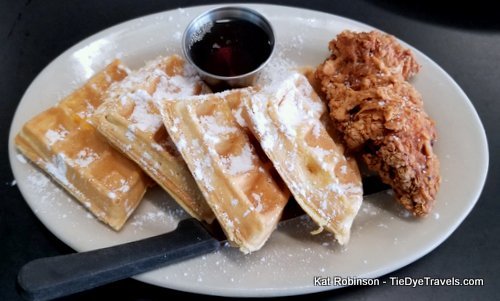 There were also the chicken and waffles - which contained less chicken than I had grown accoustomed to. A single deboned chicken thigh sat at the end of four quarters of blonde waffle, served with syrup. They were all right... the waffles. They were... I hate to say this, they were adequate but not spectacular. I don't know - I guess I was expecting the much more caramelized waffles I'd had there in the past. The chicken thigh, though - hey, I can get on board. Lovely. Deliciously seasoned dark meat. Yay. I wanted more of that. I'm pretty sure the dish used to come with two thighs. 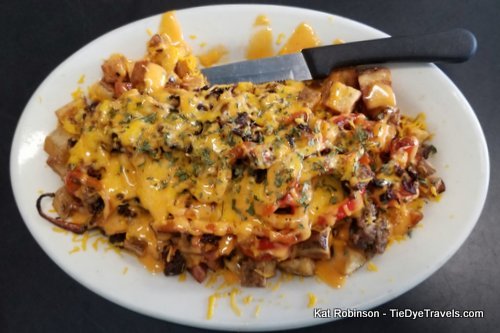 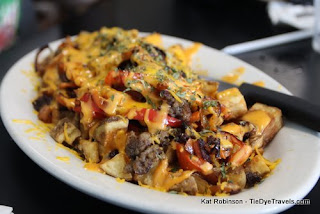 And then there was the Farmer's Hash. Here, there was a difference in the other direction. I do recall root vegetables were in the vegetarian hash that I so loved from before. So I was confused at this one. Turns out, the portions on this dish are larger now - with sausage, potatoes, assorted vegetables and such under a chili aioli that's similar to a Japanese mayo. Grav was splendidly pleased, and I made a note to order it without meat the next time.

Breakfast was delicious, by the way, don't get me wrong. But there was something missing, something incongrously amiss I couldn't quite get my head around at the time.

I think I know now. Nancy was such a force in the old restaurant that her presence is missed. She had a personality that filled this space. There was also art, and light, and a groovy feel that was almost Bohemian to the place. 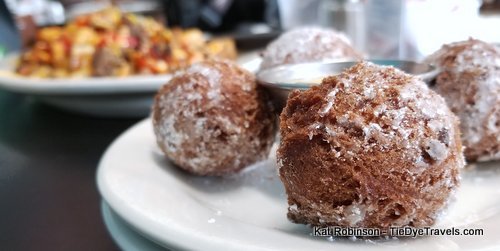 So I want to make this clear. B Side Bistro deserves to survive. It's offering some different takes on the same dishes, and while I REALLY wish there were more pork-free breakfast dishes (along with my beloved pommes roti), I can get behind this. I'm going to have to come back and try the lunch offerings and see how they stack up.

B Side Bistro did receive a push when it first opened, but as I might have mentioned, we saw no customers this particular Tuesday. That's a shame. It needs voices and spirit to make it feel perfect again. Give it a try. It's open 8 a.m. to 2 p.m. every day except Sunday. Check out the Facebook page or call (501) 716-2700 for more information.