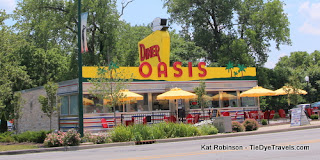 Looking for a classic? Check out this 62 year old US Highway 40 staple with its breakfasts, lunches and waitresses that still call patrons "honey." Welcome to the Oasis Diner.


Anywhere I go, I'm looking for stories to share. This past week, I've been in Danville, Indiana attending the 50th Year celebration of the Society for Creative Anachronism. Now that the event is pretty much over, I'm taking a couple of days to explore Hendricks County, Indiana.

I got up this morning with the hankering for a good breakfast that was nothing like what I normally get at home.  Google Voice suggested the Oasis Diner in Plainfield as the first open-on-Sunday option within a 30 mile radius that wasn't an IHOP, Waffle House or the like, so I hit the road and headed that way. 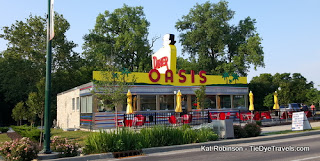 Coming through Plainfield on US 40, I knew the moment I spotted the place this was EXACTLY what I wanted.  Though there was another breakfast place on the right side of the road called Flapjacks, this 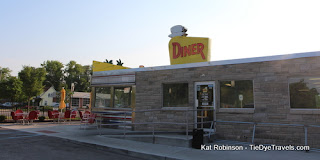 yellow and red diner called to me.  I couldn't keep my eyes off of it.

That's probably why I missed the turn and had to go about a quarter of a mile down the road to turn around. 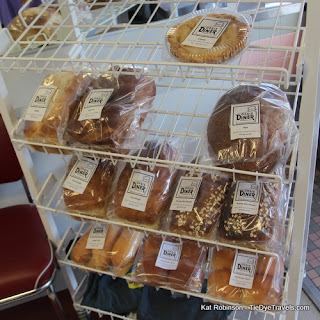 I pulled up, found a parking spot on the side and came in through the side entrance.  There at the door was a rack of fresh baked bread and pies - something unusual for most diners of this sort. Hey, I wasn't complaining.

I found a seat in a two-person booth in the front section of the diner.  The back section appeared to be an added-on windowless room, and I wanted to see that bright glint of metal I've learned to look for in these old pre-fab diners.  I wasn't disappointed. 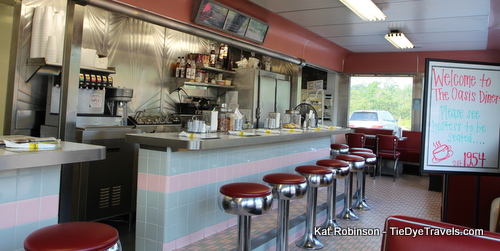 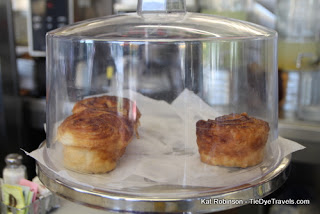 Each red pleather stool gleamed from its chrome base up.  Pastel tiles beneath were bright and clean. The counter was loaded with napkin holders and cake trays holding baked goods and... strangely enough, a jar of granola.  There were just a couple of other people in the diner at the time, and I happily ordered my coffee and waited.

I noticed right away the beverage dispenser.  The fountain didn't contain Coke or Pepsi products like I'm used to seeing.  Instead, there were just labels for each flavor - cola, root beer, butterscotch root beer, orange, lemon lime.  There was also a no-HFCS tag on the dispenser.  I cannot tell you how giddy that made me.  I contemplated changing my order, but I'd gone nearly a week without any sort of coffee (my Nutella Latte at The Beehive had been my last taste of the bean) and I needed, utterly desired black coffee. 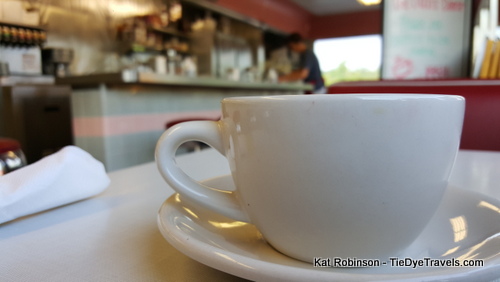 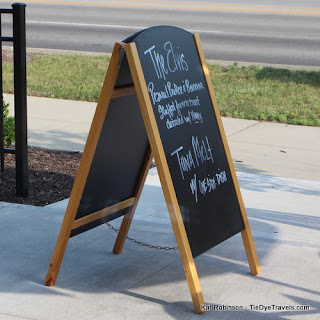 The cinnamon rolls in their clear-topped case on the counter were tempting, as was the Columbus Steak and Eggs and the Atlantic City Stuffed French Toast (look below for the menu).  I wondered over what mush was (turns out, it's cornmeal mush, sorta like Cream of Wheat) and debated an omelet.  Then I caught sight of this sandwich board outside on the patio, and my decision 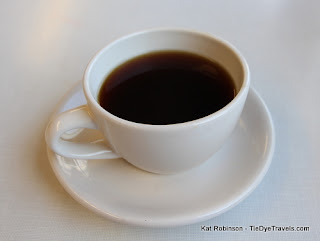 was made.  After all, Elvis.

My waitress, who called me Honey and kept my coffee cup filled with Farmers Brothers brew, told me I'd really enjoy the dish and went back to the kitchen to place the order.  I watched people. I'd stumbled in at 8 a.m. on a Sunday morning and the early crowd was just 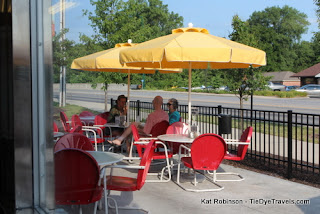 starting to form. There were people enjoying the 70 degree weather on the patio and people coming through the door to sit at the counter.

And I had just finished my second cup of coffee when my waitress arrived and delivered The Elvis to me. 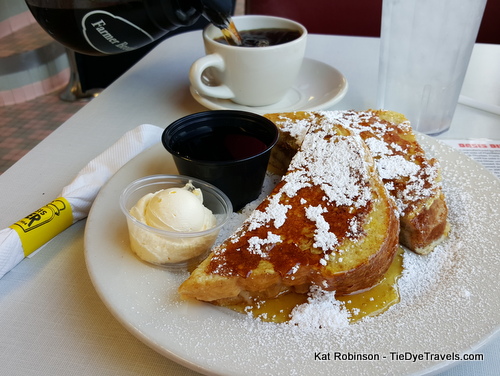 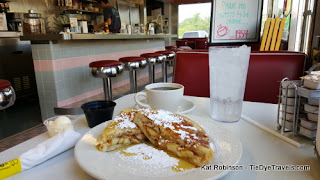 This French toast was stuffed with peanut butter and banana slices, cut crosswise (showing off the cinnamon that had soaked into the bread) and drizzled heartily with honey.  A dusting of 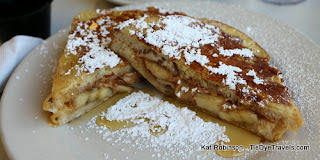 powdered sugar seemed a gilding for this humble yet ridiculously rich plate.  It was delivered with a full container of syrup and a scoop of margarine, neither of which marred my experience. 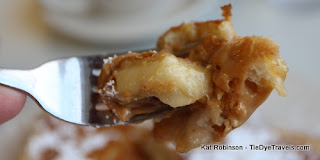 Because, as ridiculous as this may seem, it was a familiar and happy flavor for me.  See, when I was pregnant with Hunter, I had to have a peanut butter, honey and banana sandwich just about every day for breakfast.  This plate right here was right up my alley. 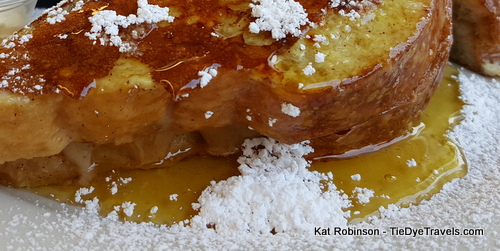 It was just as rich as you might imagine, but a good rich.  After all, bananas have potassium, and peanut butter is a tasty protein, and honey - well, honey's just molten goodness, is all.  I don't care what anyone says, this is incredible eats.

I couldn't finish it, and I felt guilty for that.  But after four cups of coffee and most of that French toast, I was aching to get back on the road.  After all, I had more stories to cover in a short amount of time, and eventually I'll have to return home to Arkansas. 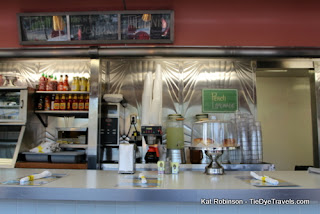 So, more of what you should know.  The Oasis Diner was originally manufactured by Mountain View Diners in Signac, New Jersey. It was shipped by rail to the east side of Plainfield in 1954.  According to a helpful placard at the table,

The original owners were James Canavan and Frank Thurber. Frank sold out and moved away but James owned and operated the Oasis until he sold it to George and Mona Thompson in the early 1970’s. The Thompson’s ran the Diner until 1982 when it was purchased by Walter and Evelyn Dininger. Walter then leased the Diner to Raymond Piercy in 1985 and he eventually bought it in 1987 and owned and operated it until 2008. Raymond’s health forced him to close down the Diner in 2008. 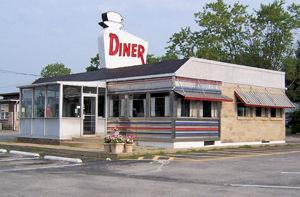 In 2010, Indiana Landmarks listed the Diner on their 10 Most Endangered Indiana Buildings list. This listing prompted the Town of Plainfield to conduct a feasibility study on the possible relocation of the Diner just 4 miles west to their recently revitalized Town Center. 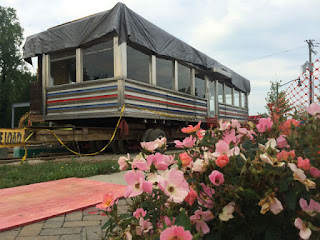 Local residents, Doug Huff and Don Rector, answered the Town’s request to relocate, restore and reopen this historical landmark and after more than 3 years of research, planning and construction, the Oasis Diner reopened in its current location in November of 2014.

Both the exterior and interior of the Oasis Diner have been restored back to their original appearance. The Diner also remains located on the Historic National Road and is the only diner on the National Road in Indiana and is only one of less than five historical diners to remain on US 40 from Cumberland, Maryland to Vandalia, Illinois.


That is SO. COOL.  I love seeing a good piece of preservation going on.

The day was just beginning to steam up when I walked out the door on the way to my next destination, the McCloud Nature Park in 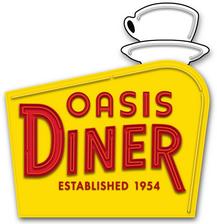 North Salem.  I made a note to tell you about this cool place, and here it is.  Now go eat there. 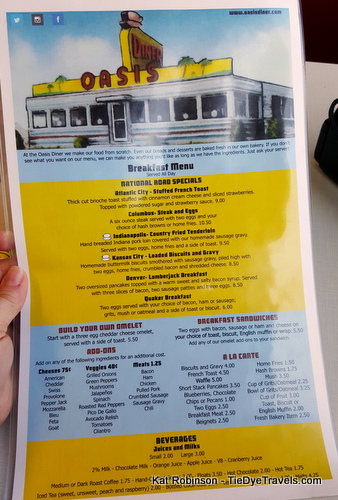 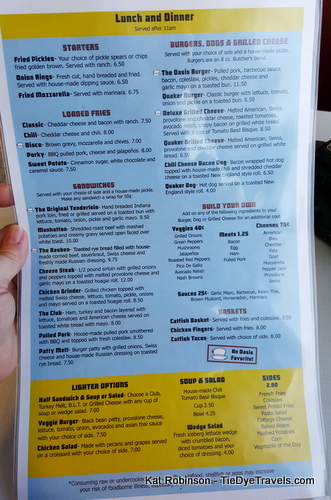