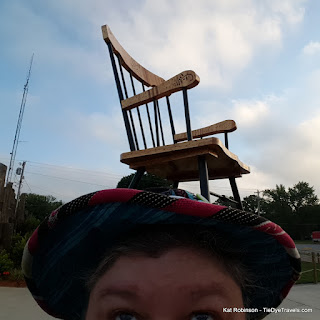 What pulls you off the interstate? Is it the promise of good food, an interesting attraction, or a delightful drive? For a central Illinois town, it's all about the big things.

This morning, heading eastbound on I-70, I kept seeing signs.  At first in my exhausted, addled state from a night of driving, I didn't register the words.  Those signs weren't highway signs.

But the billboards kept coming.  And eventually it registered.  One sign after another.

Okay, I had to see what that was all about.  So I pulled off at Exit 129 and went looking for this big windchime at six in the morning on a Friday.

A short distance south at the intersection with US Highway 40, I was distracted.  Ahead of me lay the windchime, according to a sign.  But another sign pointed me off the road and another pointed left.  This one said

Okay then.  Figuring I could come right back to it, I went off searching for the tee. 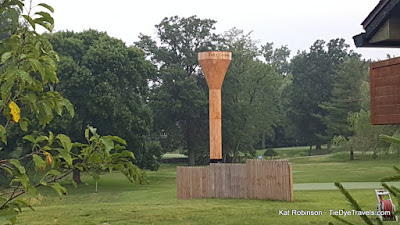 And I found it at the Casey Country Club.  I spotted it through the trees as I doubled back on a side lane, over a gorgeous little golf course.  I pulled down to the golf shop.  Apparently you can see this tee well from a platform.  But it was six o'clock in the morning. 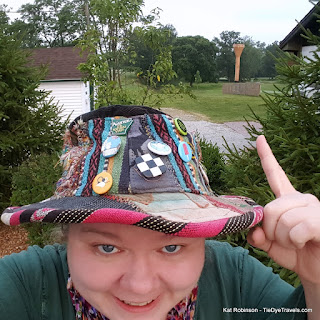 Still, I was able to take a photo of the tee from the parking lot.  And a selfie, too.

Turns out, this tee stands thirty and a half feet tall.  It was installed at the golf course in January 2013 and holds the world's record for being the tallest golf tee in the world.  It has a head diameter of 6.26 feet and a shaft diameter of 2.1 feet, and isbuilt out of yellow pine boards held together by 60 gallons of glue and 120 pounds of screws. The total structure weighs 6659 pounds. Cool.

It's been certified by the Guinness Book of World Records. Read about that here. 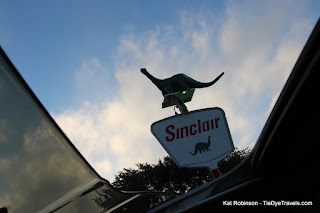 From there, it was off to find the windchime, which Google said was less than three minutes from me.  I headed out from the country club and found Main Street, and this Sinclair sign in front of an old business that appeared to be derelect. 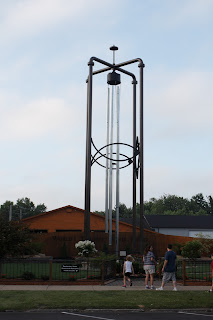 But the biggest surprises were yet to come.  Literally.  Two different structures across the street from each other.  Google told me to look to my left, but I was already gawking to my right.  See, on the left, was the World's Largest Windchime.  On the right, the World's Largest Rocking Chair.

Jim Bolin made that windchime.  It was entered into the Guinnes Book of  World Records as the Largest Windchime on June 22, 2012.  It's big, it's tall, and as I marveled at it a whole family of Indianans (is that the right state nomitive?) pulled up in a minivan, went up and rang it.

That rocking chair though - is massive. 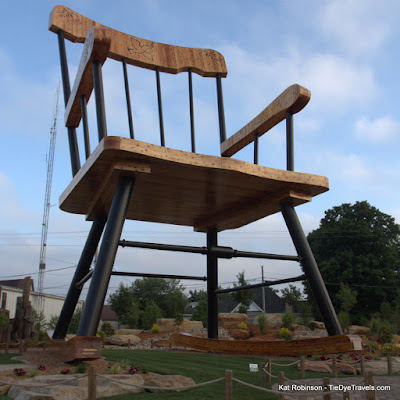 So first thing I did is ask Google on my phone, "hey, where's the largest rocking chair in the world?" And Google answered "Fanning, Missouri."  I shrugged and mentioned that in one of my Instagram posts.


But as it turns out, the rocking chair at Fanning is 34 feet tall.  This one at Casey? It's all of 56.6' in height.  It is massive.  I would suspect it's more likely to hold the title. 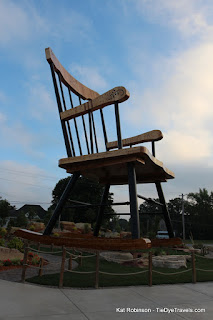 It's certainly the largest rocking chair I have ever seen.

So once I got through with the other things I needed to complete today, I went and looked up the information about the World's Largest Rocking Chair.  For one, there's a whole category on RoadsideAmerica.com on large chairs nationwide (check it out if you're interested).

Turns out Jim Bolin, the guy who created the big windchime, also built this chair.  You can read all about it here.

I got back on the road after looking at all the large things and kept heading to Indiana.  Later I found out that I missed the World's Largest Pitchfork.  Perhaps I'll catch it on the way back.  Or, on second thought, perhaps I'll just look at it.  No one wants to catch a pitchfork.