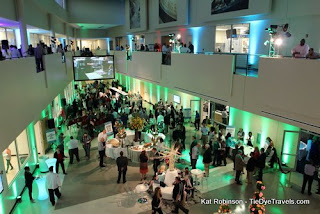 Over the course of a decade, Pulaski Technical College’s largest culinary event, Diamond Chef, has been balanced between a preliminary competition at the Marriott (formerly Peabody) Hotel and a finale at the Statehouse Convention Center. These venues offered the chance for the public to see some of Arkansas’s best culinary talent on display at centrally located venues. 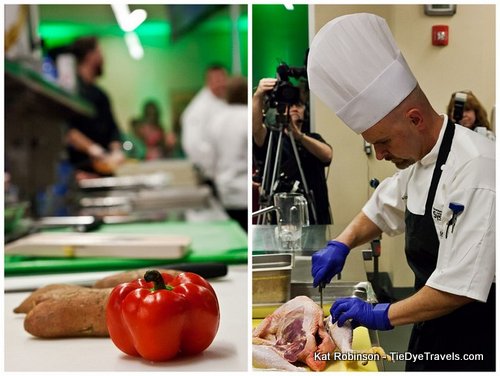 But the reimagined Diamond Chef Uncut, which combines both events and relocates the finished product to PTC’s magnificent Culinary Arts and Hospitality Management Institute, is the true gem from the rough. The event finally found its proper and best home last week. 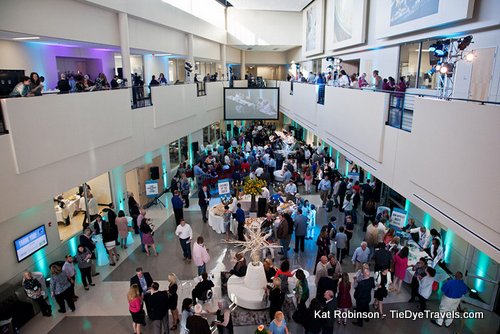 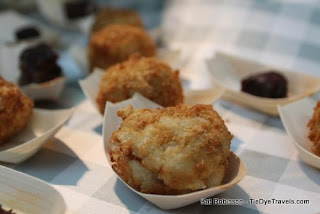 The Institute, which opened on PTC’s South Campus in September 2013, offers classrooms and lab space for up and coming culinarians and hospitality entrepreneurs in a LEED-certified space on the northwest side of Interstate 30. Its angled two-story atrium is lined with facilities where these chefs learn how to cut meat, create wine, bake bread and concoct sweets, where these future hoteliers develop skills in cleaning and room preparation. 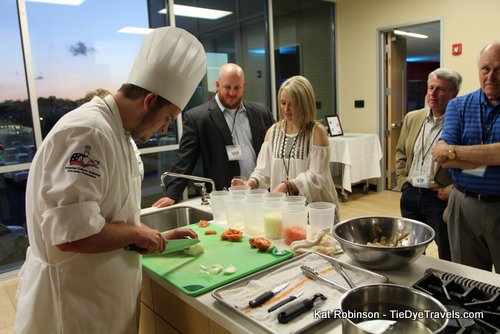 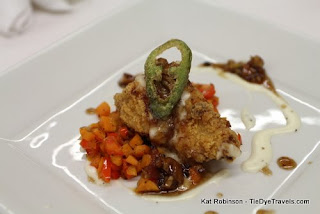 Windows into every laboratory and teaching space open up not just interiors to outside light but traditional mindsets to new forms of function.

And in the case of Thursday night’s event, the still-new facility opened up a new future for the standard competition. Bringing the battle to the actual classroom space where the students who benefit from its proceeds learn each day brought down ticket prices and allowed culinarians to show off in their showcase positions. 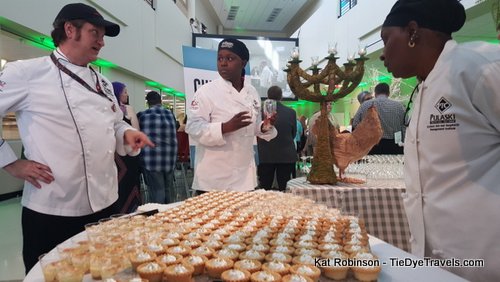 While battle waged on between six of Arkansas’s finest chefs, attention fell equally upon stations where students performed acts of cake decorating, chicken preparation and bartending. 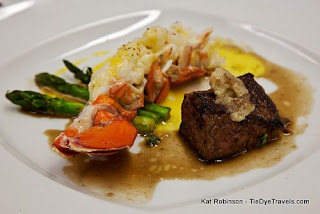 That’s not to say the battle wasn’t exciting. With four announcers (longtime radio personality Kevin Clay, TV’s Pamela Smith, comedian Michael Brown and the ever-evolving Stubby Stumbaugh) covering ground, commentary bounced back between the six chefs competing over stoves in the meat lab, an upstairs podium overlooking the atrium, a downstairs judging stand and the atrium itself. 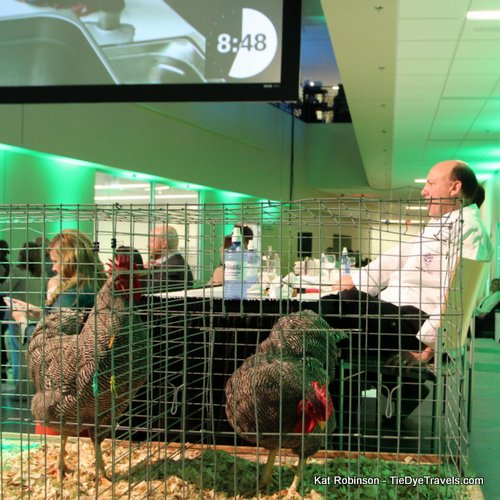 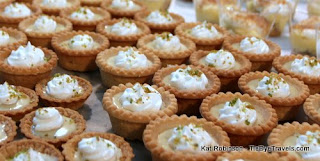 Large screen televisions brought the battle within the glass-enclosed space out to the crowds wherever they were, giving more people the opportunity to enjoy the competition as they dined on hor d’oerves prepared by the chefs and students at the school. Rather than previous editions of the finales catered by a staff bringing dishes to table with no connection to the competition, these diners consumed delicacies made in-house, many by students of competitors and judges on duty. 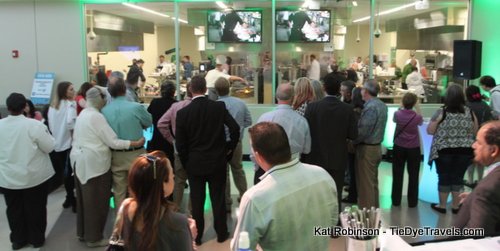 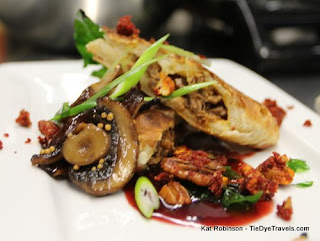 The degree of separation meant that yes, the crowd wasn’t in the immediate cooking space as the competitors. But that also meant six chefs could compete simultaneously, decreasing the event’s timespan and increasing the possibility of food lovers of being able to remain an audience throughout each act. 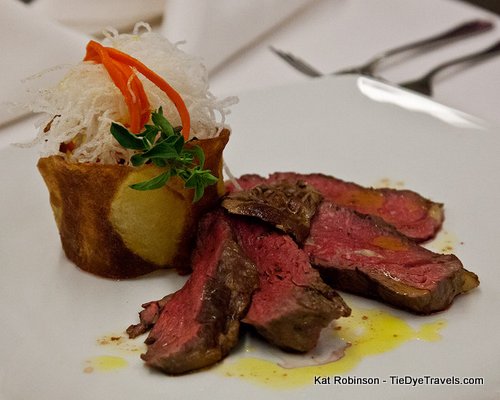 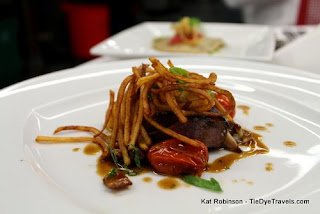 The excitement began shortly after 6 p.m., when the secret ingredient was announced – beef. Now, a normal ingredient like beef may seem easy, even for a home cook. But this time, competitors raced to grab whatever portions of an entire side of beef they could manage, from the tenderloin to the brisket to the ribs. For two rounds, the six chefs developed these edible concepts on the fly, assisted by two sous chefs, on the clock and with hundreds watching on monitors and through the lab’s gigantic windows. 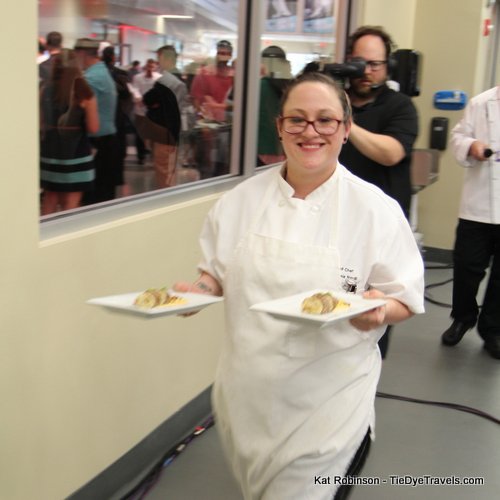 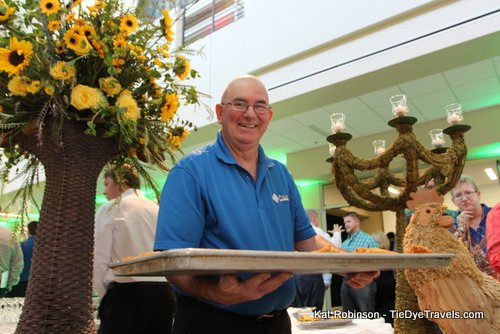 While the competition was underway, attendees dined at several stations on such things as Indian curried chicken-filled arancini balls, pulled pork sliders, beef short rib, edamame dip, stuffed tomatillos, and more – even a croquembouche of pistachio-laden tiramisu cream puffs! They also bought chances in a Bon Appétit Bag Pull for chances at culinary experiences and merchandise, and a Wine Pull. 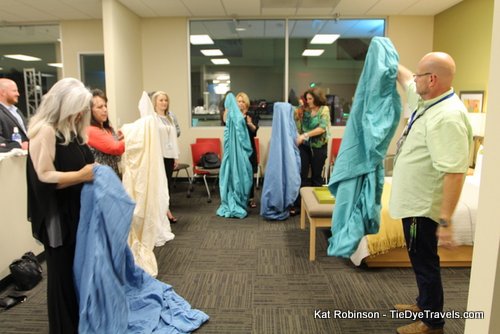 Upstairs in the hospitality lab, competitions were held in towel origami and demonstrations were given in how to fold fitted sheets. Downstairs, student-created microbrewery beers, root beer and cream soda were sampled and knife skills were demonstrated. 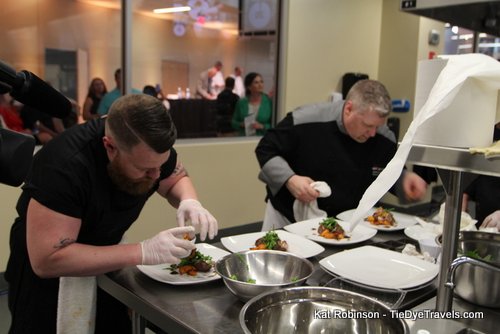 After two rounds of beef creations, the judges whittled down the field to two finalists – Chef Jason Knapp and Chef Donnie Ferneau, who competed with two more rounds. This time, heritage poultry was the star, and both chefs were able to take advantage of the entire bird. 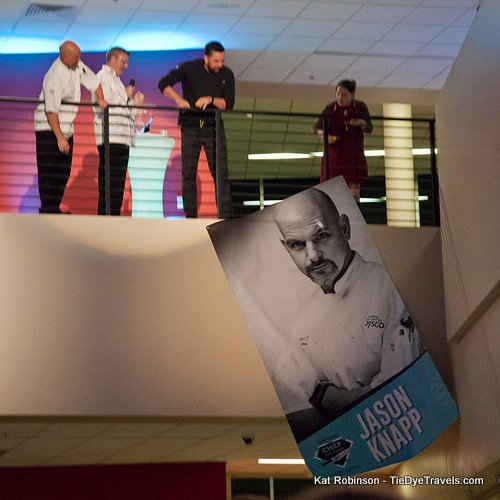 Once the smoke (or, well, the quick char on some chicken bits here and there) had cleared, and with a very tight margin between the two, Chef Donnie Ferneau won the battle. But Pulaski Technical College and the Arkansas Culinary School are the real winners here, as evidenced by grinning students and instructors who were able to smile and share their unique and excellent facility and show off their skills and finished products to a crowd of food lovers they’d invited to their culinary home.

If you'd like more information about the Arkansas Culinary School, please click here.
Told by Kat Robinson at 12:54:00 PM