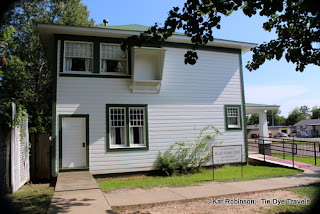 The place recognized as the childhood home of our 42nd president is in the news right now for a suspected arson, but will certainly be cleaned up and re-opened soon.  Here's what it looked like before the fire at Bill Clinton's earliest home.

This green trimmed white house was originally constructed in 1917 for Dr. H.S. Garrett, and modeled after a similar abode he'd live in while in France.  It was purchased by Eldridge Cassidy and Edith Grisham Cassidy, Clinton’s grandparents, in 1938.

What you can see from this photo is the north side of the house, with the kitchen windows downstairs and the windows to Bill's nursery upstairs.  The boxy form right next to those second floor windows is a fan boxing, where a fan would have been put to bring air through the house during the summer months.  This is the side of the house where the fire occurred. 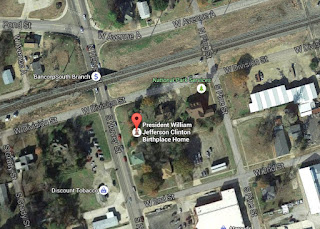 The home is on Hervey Street, the main street from Interstate 30 to downtown.  The National Parks Service visitors center is on Division Street, a half block to the northeast. The site is open 9 a.m. to 4:30 p.m., every day except Thanksgiving, Christmas and New Year's Day.  I suspect it'll be a short while before the house is back in order, but when it is, tours are free and they're available every 30 minutes. 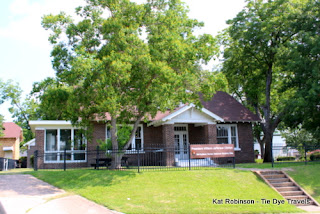 The visitors center is a good place to stop and look around, even if you can't tour the home.  There are displays inside that cover Bill Clinton's life, along with the history of his family and some bits about Hope as well (there's also the Hope Visitors Center and Museum, three blocks up 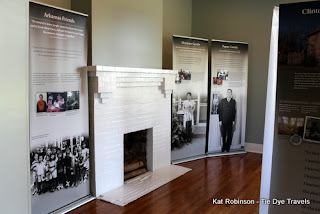 Division Street in the old restored 1912 depot, which will tell you more about the area).  The center also offers restrooms and a gift shop.

The other homes that once lined that block of Division Street are gone, but the space allows for a garden and lawn, which 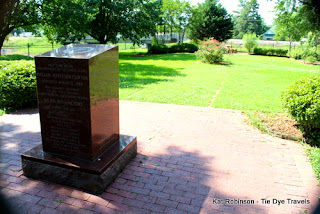 you'll cross on your way to the house.

In case you were wonder, Bill Clinton wasn't born here.  He wasn't even called Bill Clinton.  He was the son of William Jefferson Blythe III, who married Virginia Cassidy, his mother.  Unfortunately, Blythe was killed in an auto accident before his son was born, and Virginia moved in with her parents.

William J. Blythe IV was born August 19, 1946 at Julia Chester Hospital, which is gone today (a plaque marks where it once stood).  His grandparents raised him in this home while their daughter studied nursing in New Orleans. When his mother married Roger Clinton in 1950, they moved to a house on 13th Street, and a few years later they relocated to Hot Springs. As you guessed, the boy took on his stepfather's name.

The tour enters through the front door. Inside, the living room takes up the entire front half of the first floor.


The tour guides for the visit are very knowledgeable about their subject, and a couple of them are also rather funny.  They're a great resource for stories.

The dining room looks out over the sideyard, and is located on the southeastern corner of the first floor.


The kitchen was small but well-stocked.  There's a galley in-between the kitchen and dining room, where plates, china, glassware and silverware was kept.

The upstairs portion of the 2100 square foot home housed living quarters - two bedrooms, a bath and a nursery.  Once the tour group proceeds upstairs, the tour begins again in Virginia Blythe's bedroom, which includes the front half of the second story of the house.

The household's only bathroom is on the east side of the second floor, and it contains a clawfoot tub.

And then, the place everyone wants to see -- Bill Clinton slept here.


At this writing, there's no expected opening date for reopening the home to tours.  I hope these photos sate curiosity for now.  Please, if you are in Hope, do visit the President William Jefferson Clinton Birthplace Home National Historic Site.

While you're in the area, drop in down the street at the Hope Visitors Center and Museum.
Dine at Amigo Juan's.

And if you're planning to make a stay in the area, consider Grace Cottage.