Fighting Words About Stubby's Bar-B-Que and its Sauce. 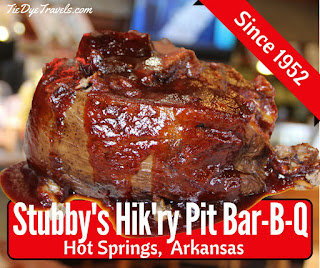 When the random person anywhere in the United States is asked about barbecue and Arkansas, particularly barbecue from Hot Springs, you know what they're going to say.  But there are other barbecue joints in the Spa City, and one of them has been around more than 60 years. 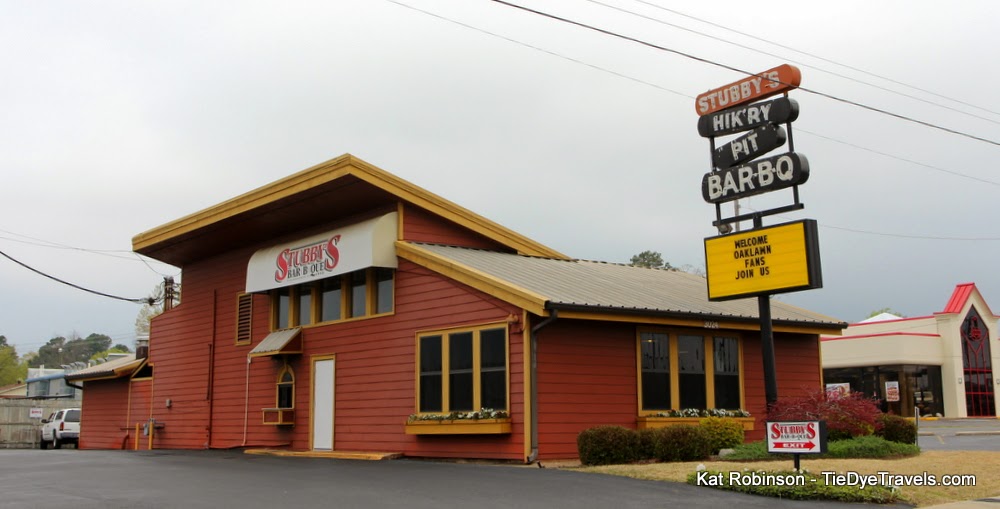 Back in 1952, Richard Stubblefield Sr. started slow smoking pork, beef and chicken over fragrant wood over at 1000 Park Avenue.  He was a master of the hickory pit, smoking up ham and ribs, pork butts, briskets and whole chickens. The sauce conjured at the restaurant was sweet, thick and mild and the customers just kept on coming.

Mr. Stubblefield sold out to the Dunkels from New York in 1977.  Mr. Dunkel worked for a short while for Coy's Steakhouse, and he got to talking with Stubby and they made a deal.  The Dunkels opened a second location in 1978 along Central Avenue just south of Oaklawn Park -- which remains the restaurant's key location today. 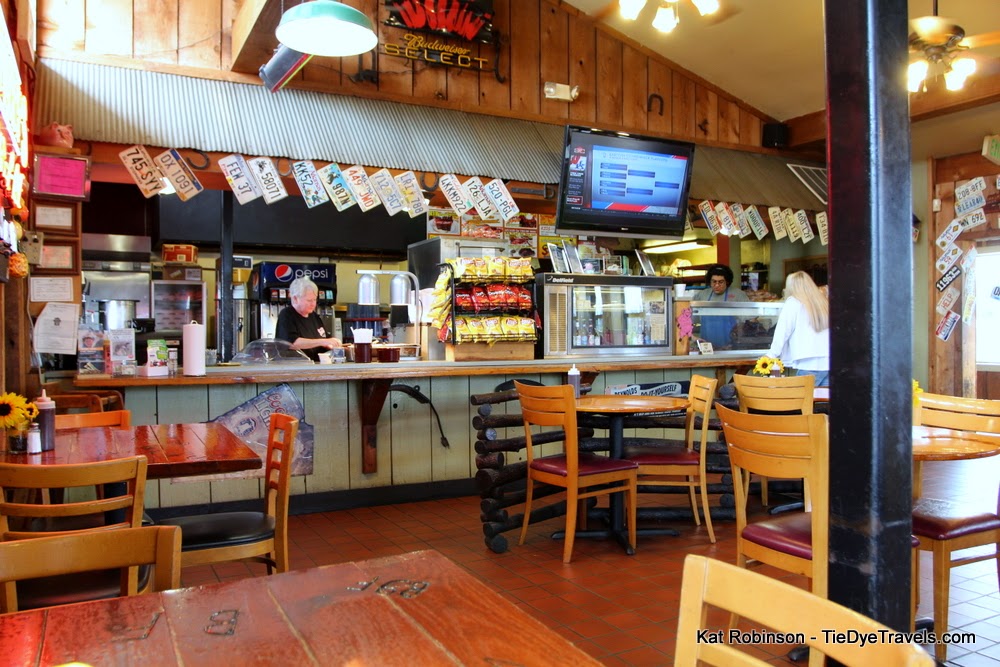 Susan Dunkel is still involved in the operation today, but it's her son Christopher's shop now.  Still, people keep on coming in, and there are locals and Arkansawyers who frequent the city who say Stubby's beats everything else by far. And while I have been blessed with the gift of Stubby's sauce (which is available in retail stores and by mail order), I hadn't been back there to do a story since I started this blog.  It's time to remedy that. 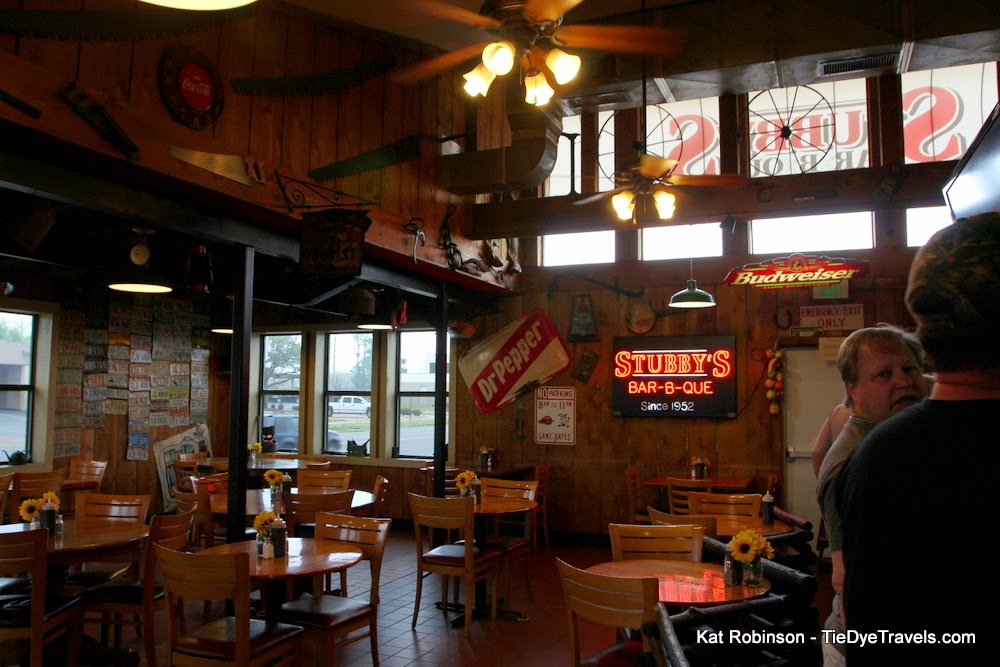 I dropped in one Wednesday morning before opening time and sat in my car waiting.  By the time the doors opened, the vehicle had been permeated with the amazing, fragrant scent of hickory smoke and roasted meats, and I was dying for a tasty bite.  Even arriving early, I was about fourth in line through the door to push a tray through the line and pick up what I wanted. 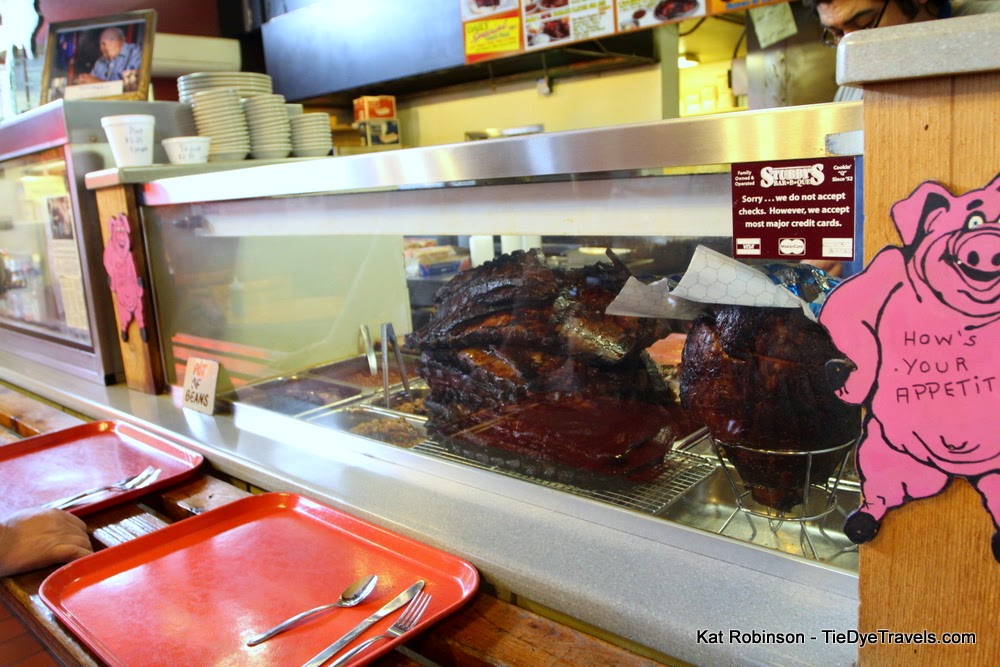 Inside the case on that line, one can view shiny, smoked black butts and briskets next to vats of beans, sauce and shredded meats.  The outside "skins" of the smoked meats are black thanks to the tomato in the sauce -- these meats are doused, swabbed, rubbed, wiped with that magnificent sweet sauce during the smoking process, and if you're in it for flavor, you'd be smart to ask for a bit of the "crust" when you place your order.

Though I dallied over the thoughts of a jumbo shredded beef sandwich, I changed my mind after reading the menu board. Turns out, everything -- and I do mean everything -- is affected by smoke in the place.  Not only are the meats smoked in the hickory pit - the potatoes are as well, big red-skinned potatoes used for potato salad and for the gigantic potatoes available for stuffing. The beans, legendary in their own right, come from a big bean pot at the bottom of the pit, which is the beneficiary of the dripping juices from each of the animals whose flesh is smoked there... sadly, this means I cannot eat them, but every other person I know who's endeavored to try Stubby's reminds me of the masterpiece I am missing.

There's also the matter of the quality of the meat.  I have been informed that the hams are the pride of Arkansas themselves, right from Petit Jean Meats in Morrilton.

There are three degrees of potato: the smoked pit potato, which comes with butter and sour cream; the stuffed potato, which comes with beef or pork and sauce; and the supreme, which is a potato stuffed with meat and sauce, beans and slaw.  I went for the middle and asked for a stuffed potato.  I was asked if I'd like one lump of butter or two (one would do, I reasoned) and then I watched as the gentleman behind the counter ripped brisket from one of the husks of meat behind the glass and shoved it inside the potato.  Sauce was ladled over the top, and the whole mess was handed to me.  I also opted to try a couple of deviled eggs while I was at it.

The sheer heft of the potato became evident to me when I took that plate.  It was likely two pounds of potato and meat, far more than I had expected.  I was handed a packet of sour cream and sent down the line to the register, where a lovely woman rang me up. 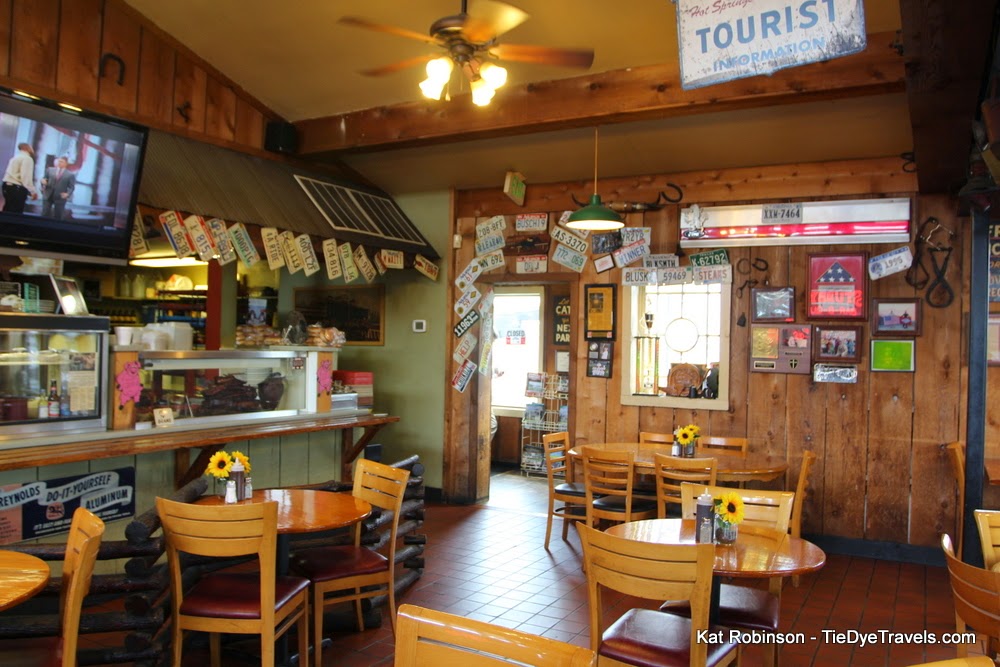 Within the walls at Stubby's, everything is remarkably clean... surfaces are carefully lacquered without a hint of greasy buildup.  This is quite unlike most barbecue joints I have visited, where conditions range from cleaning attempts made to greasy walls to... well, to the 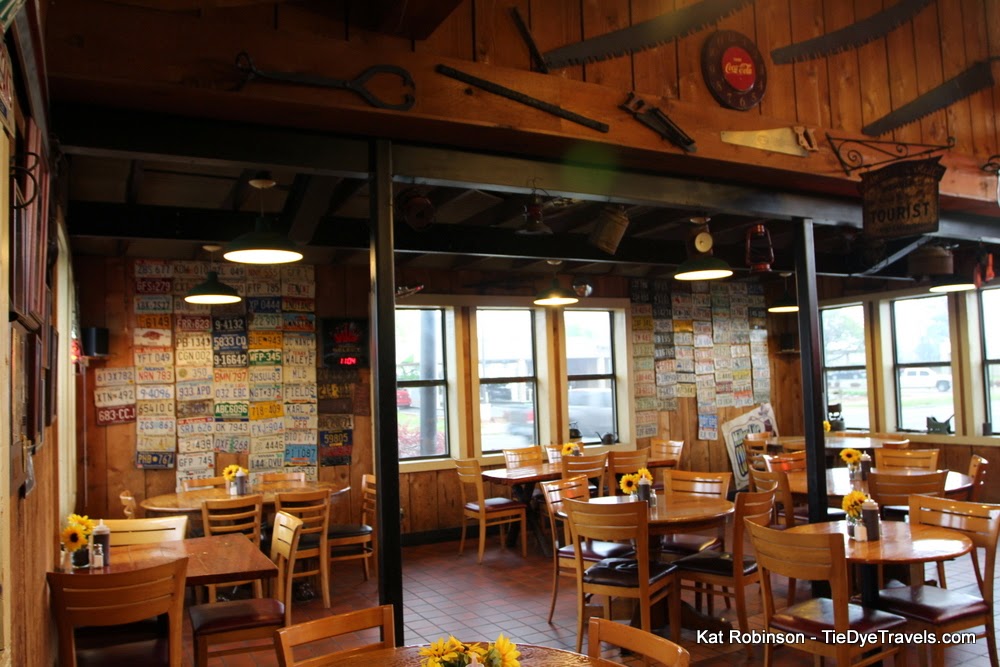 point where one closes one's eyes and tries not to look towards the kitchen for fear of what matter of animal or ash might lurk beyond.  Stubby's, while decorated eclectically with a hundred different license plates, aged signs from around the area and other decorations, is neat as a pin.

I know Stubby's burned a few years back... in 2007.  As sometimes happens in barbecue joints, the fire got away from the pit and ate the place.  But the rebuild, from the outside, simply looked as if someone hit rewind and then threw a fresh coat of paint upon the place.  There's no real change. 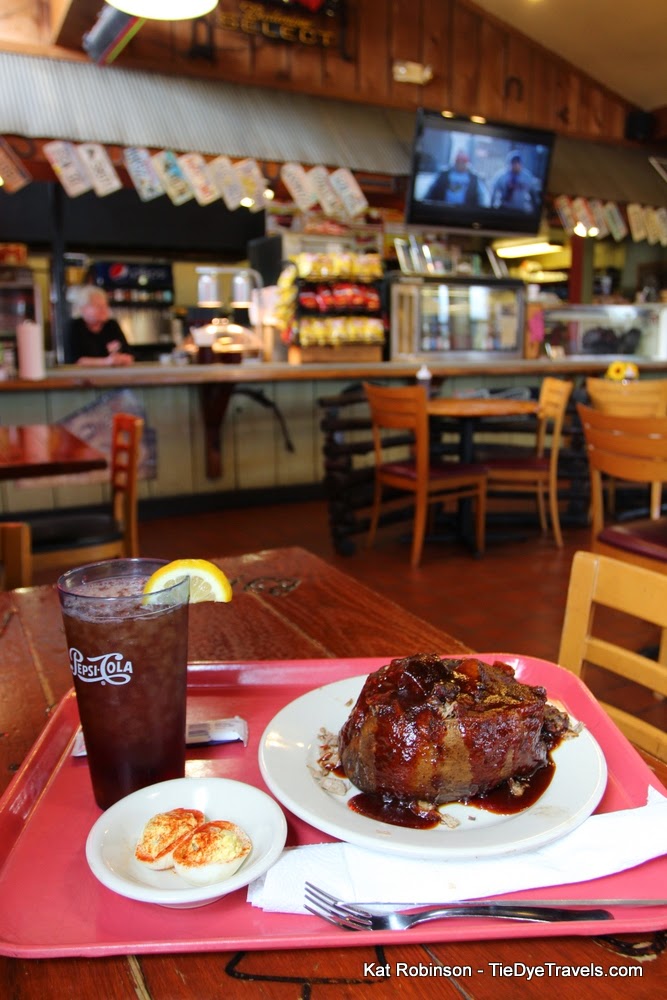 Still, you are wondering about the food, as well you should.  I had to take my photographs, of course, and all the time the sweet and tangy scent of ketchup, sugar, vinegar and spices from that sauce taunted me.  I wanted to drool.  I wanted, actually, to lay lips to the potato's filling and slurp, but there were other customers, and I was dressed nicely, and heaven forbid someone get a photo of THAT.  No, moments such as that are reserved for standing in my own kitchen with no witnesses to be found. 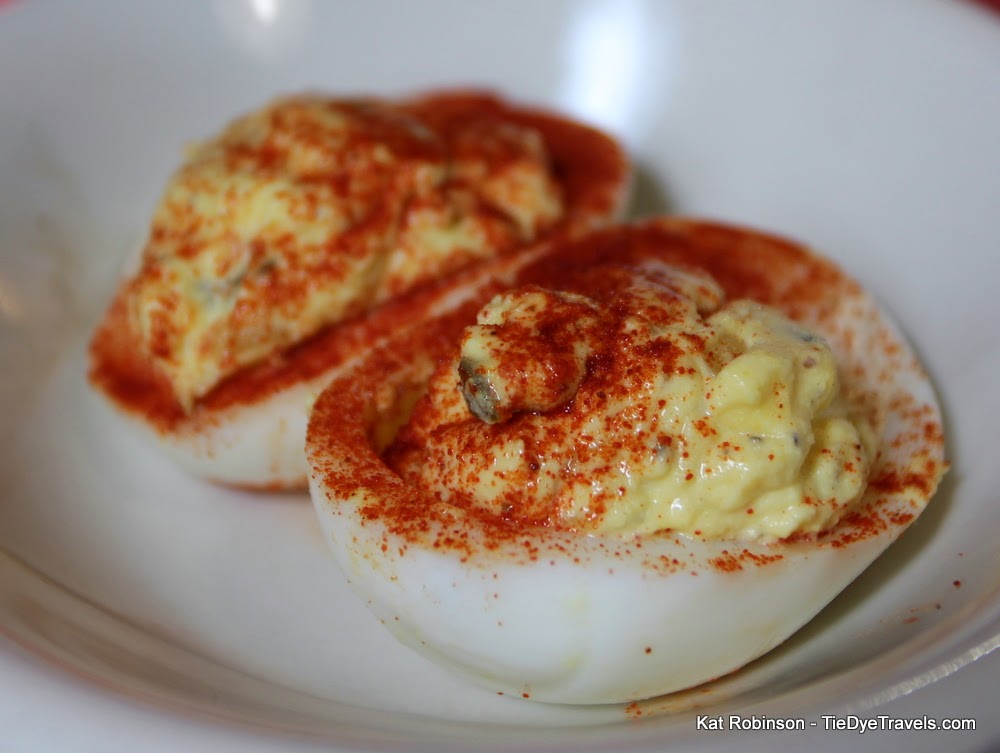 The deviled eggs, I sadly found, were very good for someone who likes a lot of mustard and dill flavor to them, which I do not.  They were good examples and should not be criticized for my particular tastes.

The potato, though, once I managed to break out of my reverie and adequately 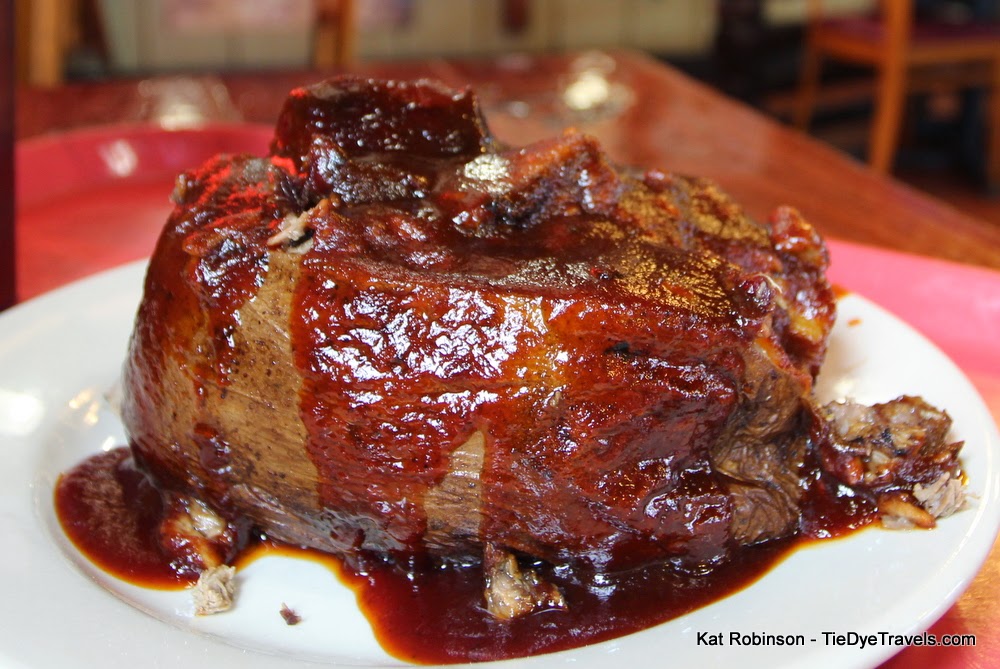 document the mammoth shoe-sized spud, was a delight.  The brisket was smoky, tender, moist but not too greasy, with little crusty bits of that sauce-swabbed 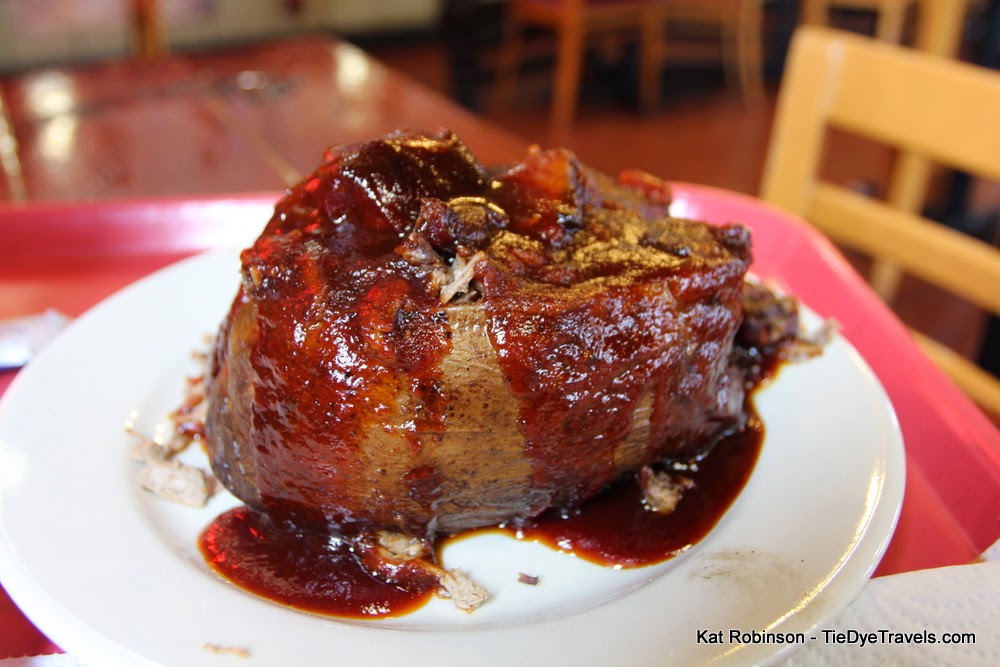 outer crust that were just heavenly.  The sauce, sweet and thick, clung to the meat and the potato better than ketchup and with such a rich and full flavor... you know, I could eat the sauce on a bun and be quite happy, meat or not.

But the real surprise was 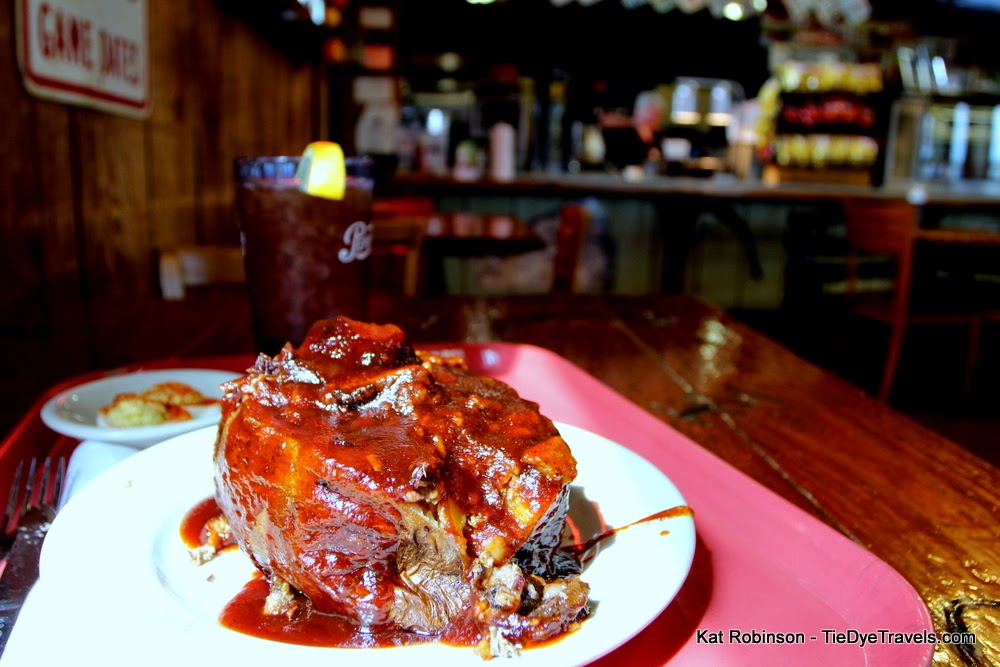 the potato itself, with its permeated woodsy hints of flavor.  This perfect vessel... well, it's a two person job to properly respect this spud, and the folks at Stubby's will not fault you for asking for a box to take home the half you cannot bear to ingest for fear of gastronomic puncture.  It's big, it's hearty, it's tasty... you should share. 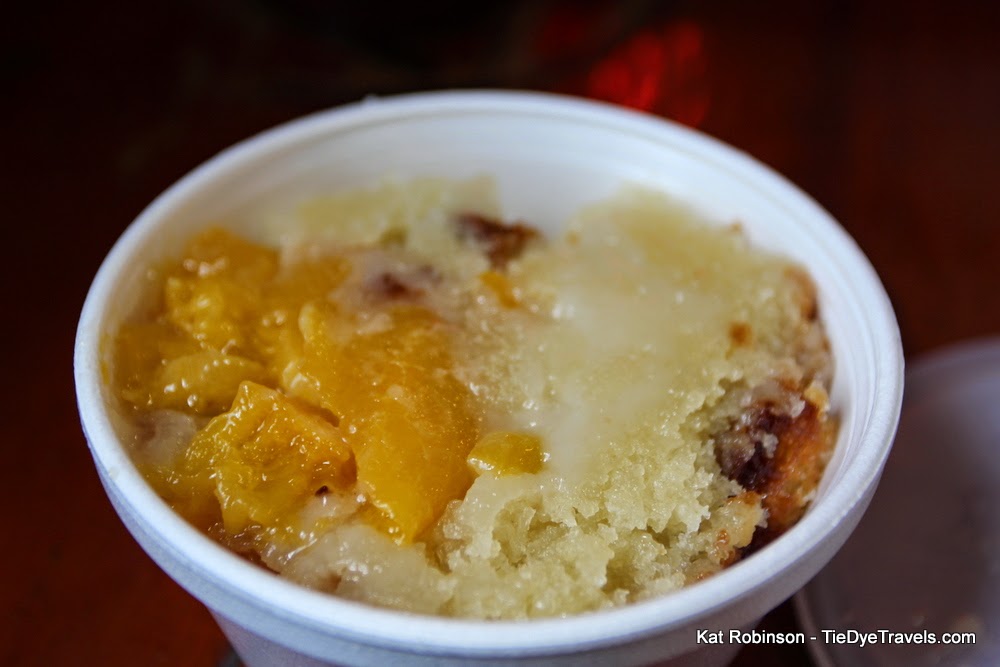 I was wise this particular day.  I asked for the box early on, thanks to the pan I had noticed when I was at the register.  There's one food item that doesn't go into the pit at Stubby's, and that's the peach cobbler.  It goes into the oven and then it's scooped out on a plate or in a bowl for individual consumption.  Rich, buttery and a little crusty (I LOVE the crusty cobbler bits), speckled with canned peaches, it's an old school dessert for an old school restaurant, and I cannot imagine anything else being served. 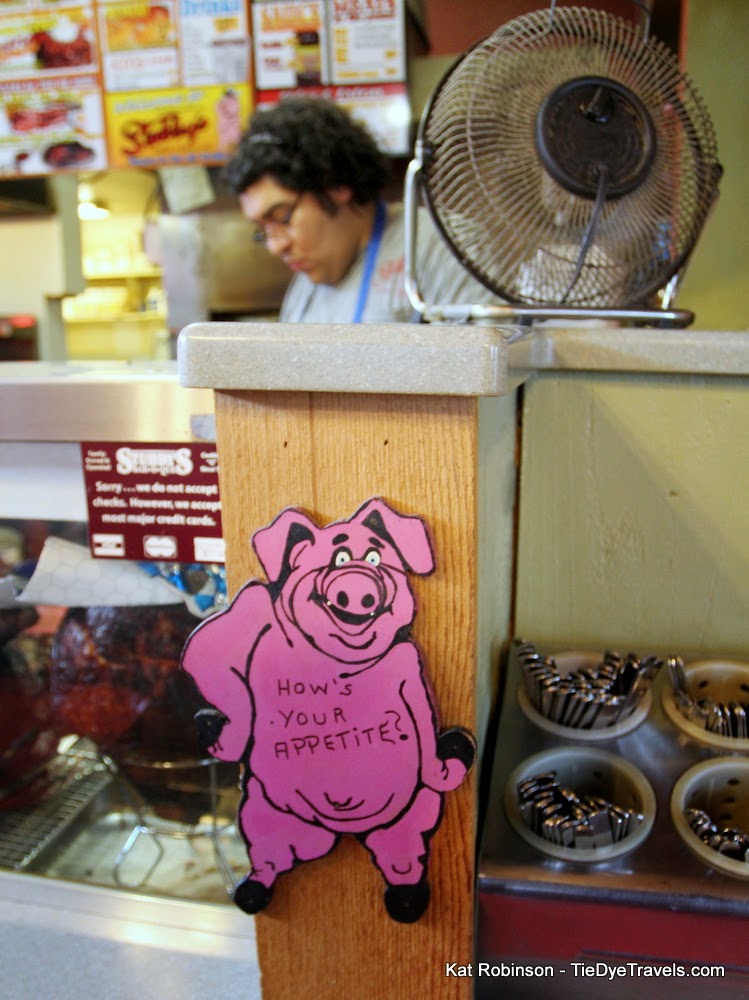 As I mentioned, the sauce at Stubby's is available a whole lot of places, or online at the restaurant's website.  And applying it to your own smoked meats is a good call.  It's a very good sauce.  But I still think you're not going to get the whole effect until you get down to Hot Springs and have yourself a plate or a potato packed with smoke-soaked meat doused in that thick, sweet sauce.  Get yourself down there and try a bite.  And then make your own decision about what might be Hot Springs' best barbecue. 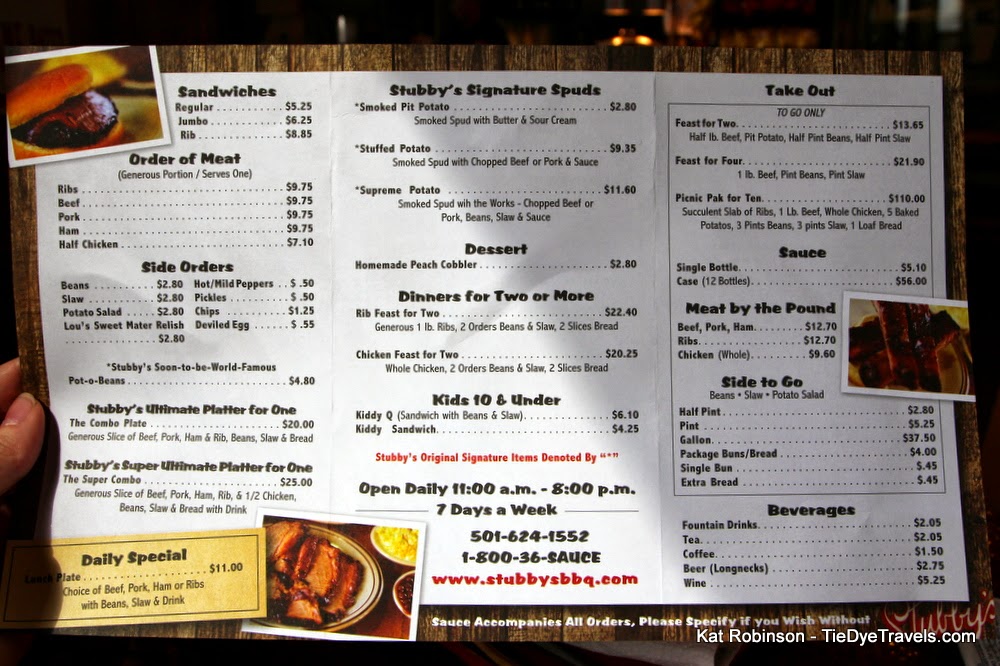 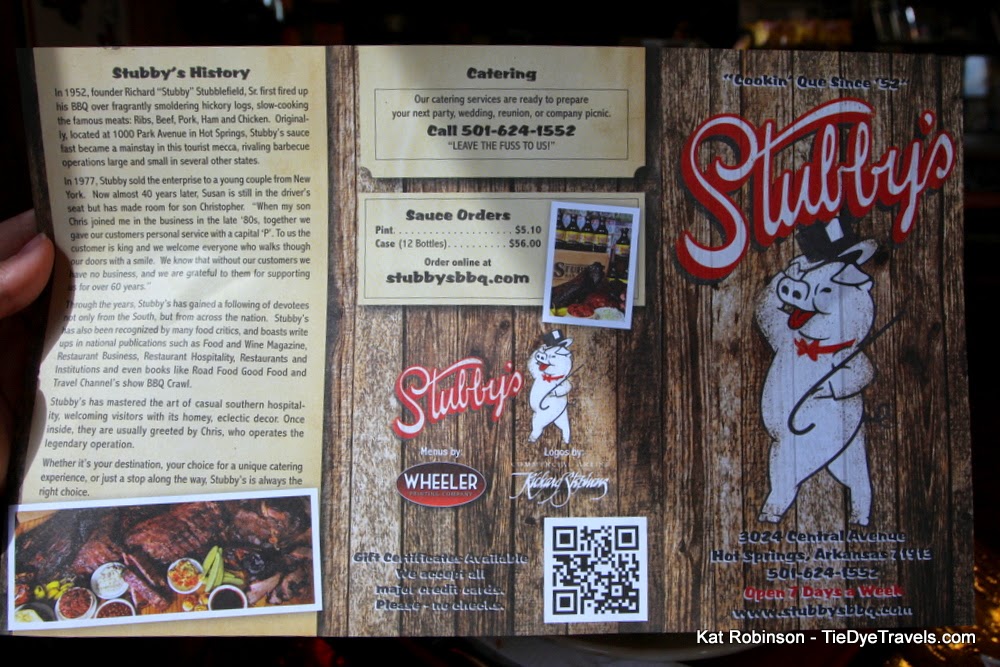