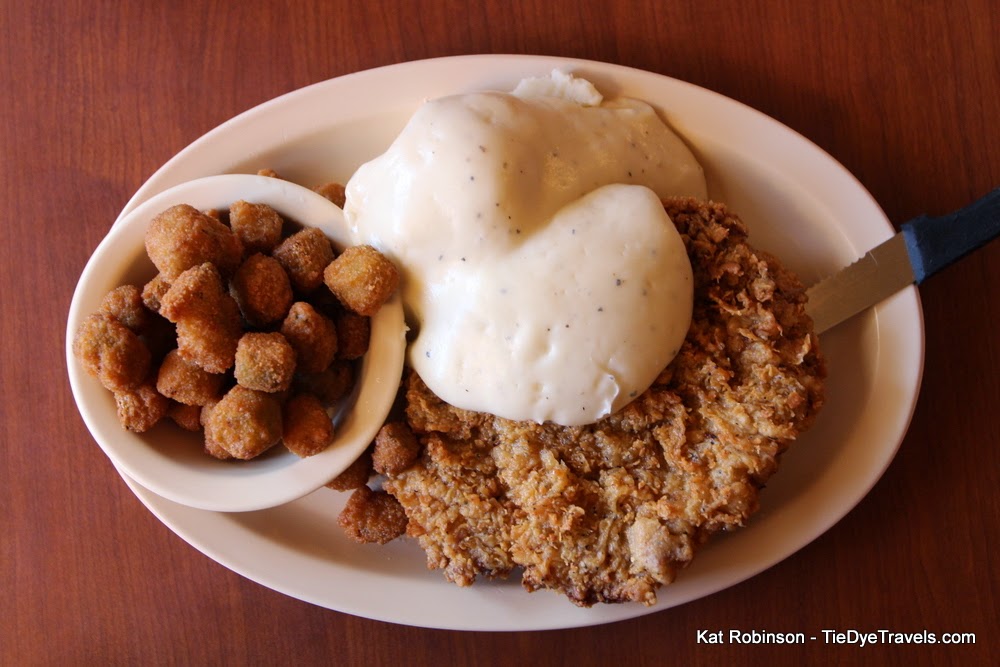 I'll admit right now, I have spent very little time in Oklahoma over the years.  Louisiana? Tennessee? Mississippi?  Yeah, been all up and over.  But except a short run to Muskogee a few years ago and visits to Grav when he lived in Arkoma, I really haven't had much chance to become familiar with Arkansas's western neighbor.

But new friends and adventures await.  And on this most recent trip, we decided to search out sustenance roughly halfway between Fort Smith and Oklahoma City.  That brought us to Checotah, a burg that calls itself the "steer wrestling capital of the world."  I knew I wouldn't mind a piece of steer or any other beef by that point... the three of us were very hungry. 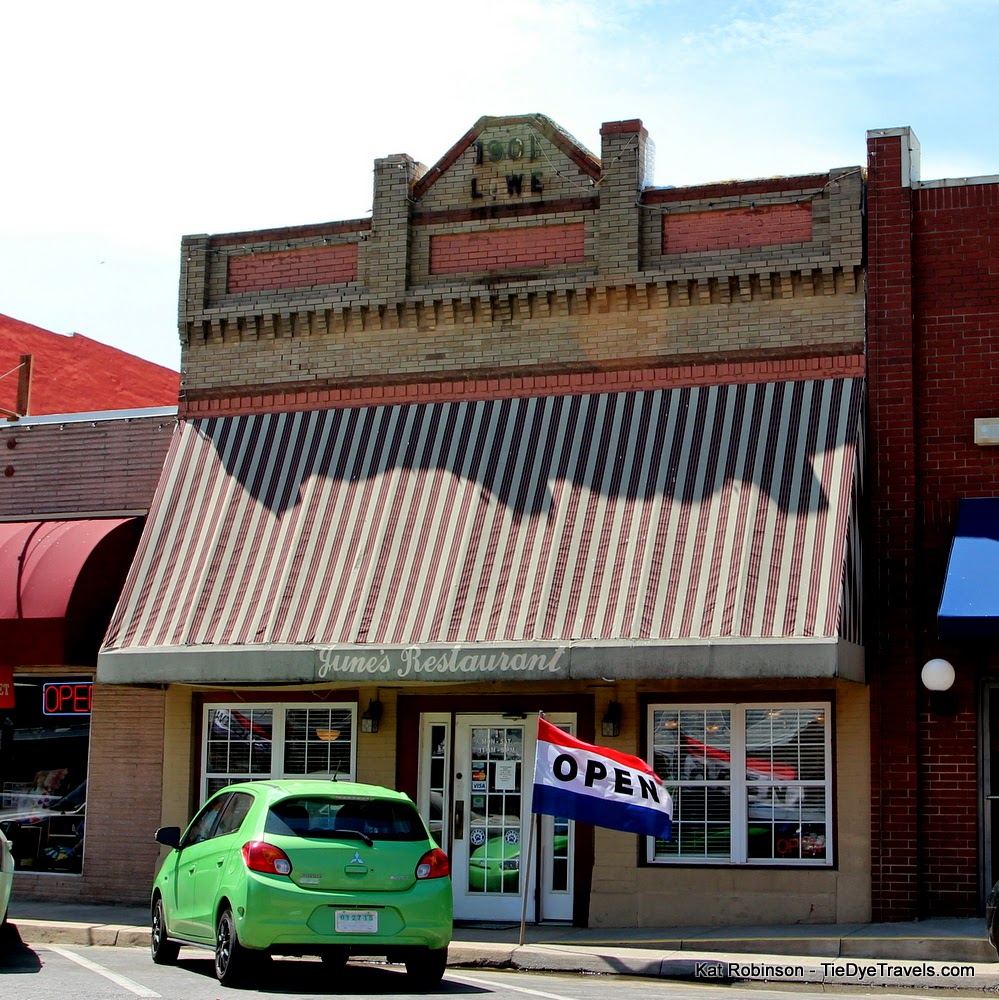 A quick Urbanspoon consult brought up a bevy of Mexican eateries and this one... June's Restaurant.  Located along Broadway in the diminutive downtown, June's is housed in a building that dates back to 1901.  Under its striped awning and through a double doored vestibule, country-style tables and booths sprawl out under a low ceiling.  At the back of the building, twin stairs lead to a kitchen on the left and restrooms on the right. 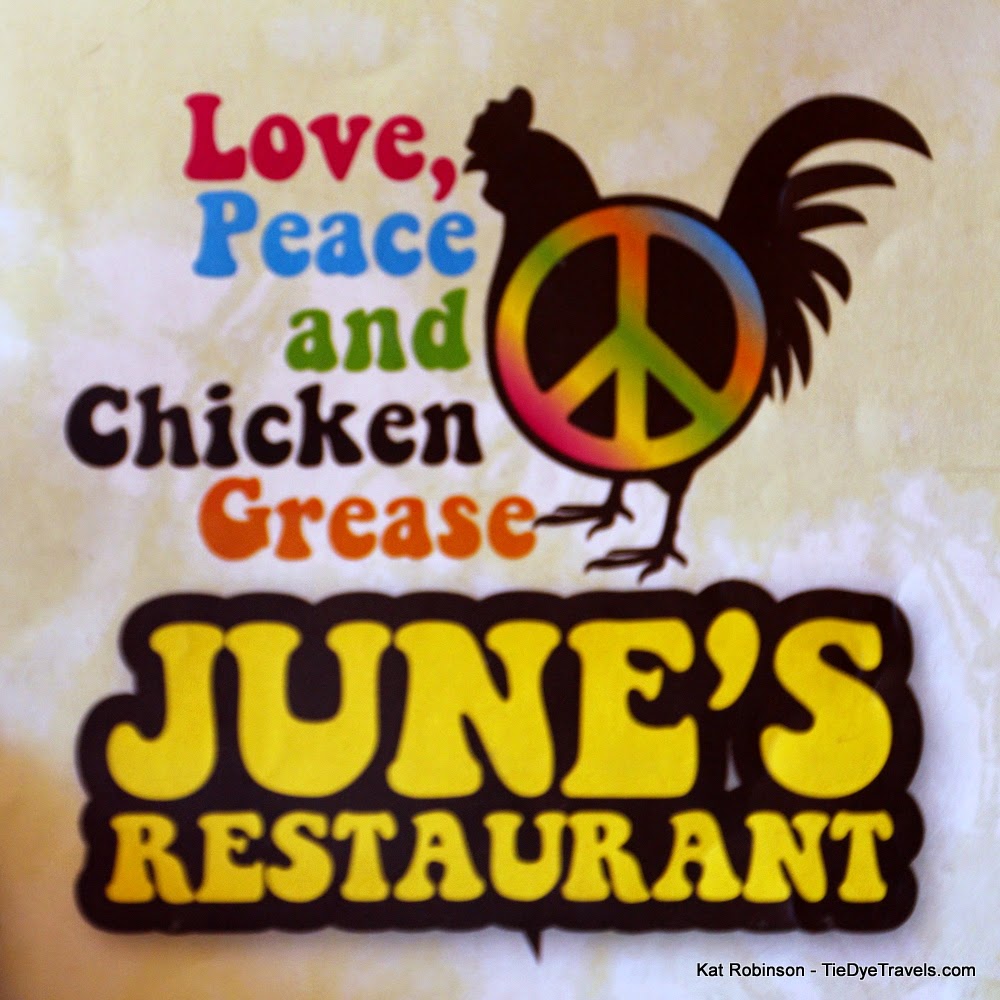 The Oklahoma Tourism page raved about June's Restaurant's chicken fried steak, and it looked pretty decent there (hey, OK Tourism folks, you might like the photos to come!) so I knew that was what I was going to get... at least, until I looked at the menu and saw the admonition "Love, Peace and Chicken Grease."  Hold the phone.  Chicken?

Yeah, chicken.  And not just chicken.  Chicken and more chicken and chicken and even spaghetti.  Um, all right.  Grav and I started to debate whether northwest Arkansas food culture had spread this far, and whether the family was of Italian descent, thinking of the Tontitown settlers.  Fried pickles were also in evidence, but that's because fried pickles are awesome, and who could restrict Mr. Austin's fine creation to the borders of our own state. 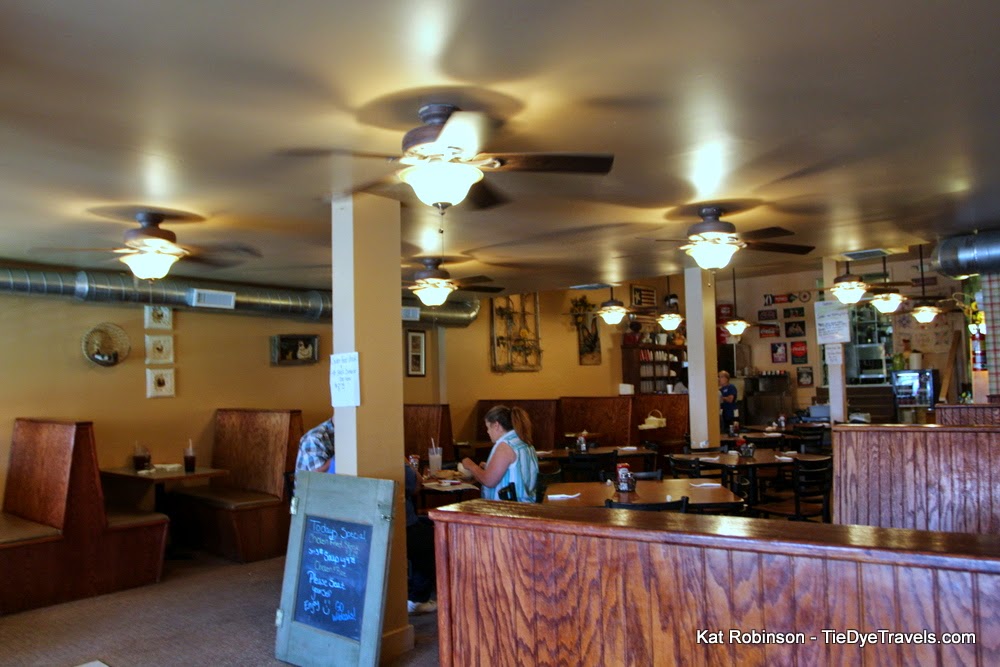 As I mentioned, I picked my choice quickly.  Hunter also knew what she wanted... being in a corndog mood, the idea of anything else was just anathema to her.  But Grav dithered... and, in hindsight, why shouldn't he have?  After all, amongst the offerings on that menu were six different quarter pound
burgers, three salads, a couple of steaks and a dozen different sandwiches.  And there were all the chicken dinner iterations -- the most complete called the Big Boneless Dinner (which sparked Hunter to comment on this particular Boneless ->) which included not only the hand pulled, battered and fried chicken that the restaurant was known for, but also spaghetti, salad, the vegetable of the day, mashed potatoes (baked potatoes after 4 p.m.), gravy and bread.  Down the page different items were subtracted to create the other meals.

And eventually, Grav did decide to go with the chicken and fries.  It seemed simple and small.  It was neither.

This is what he got. 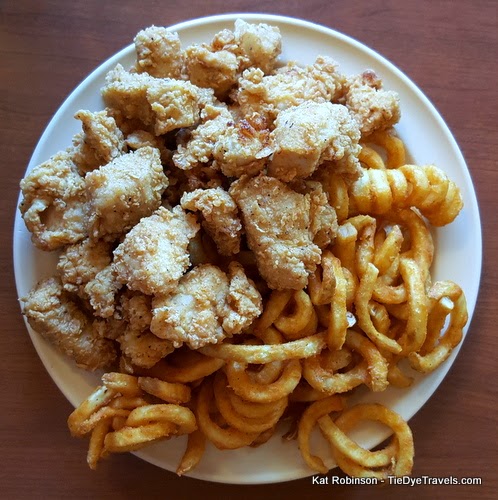 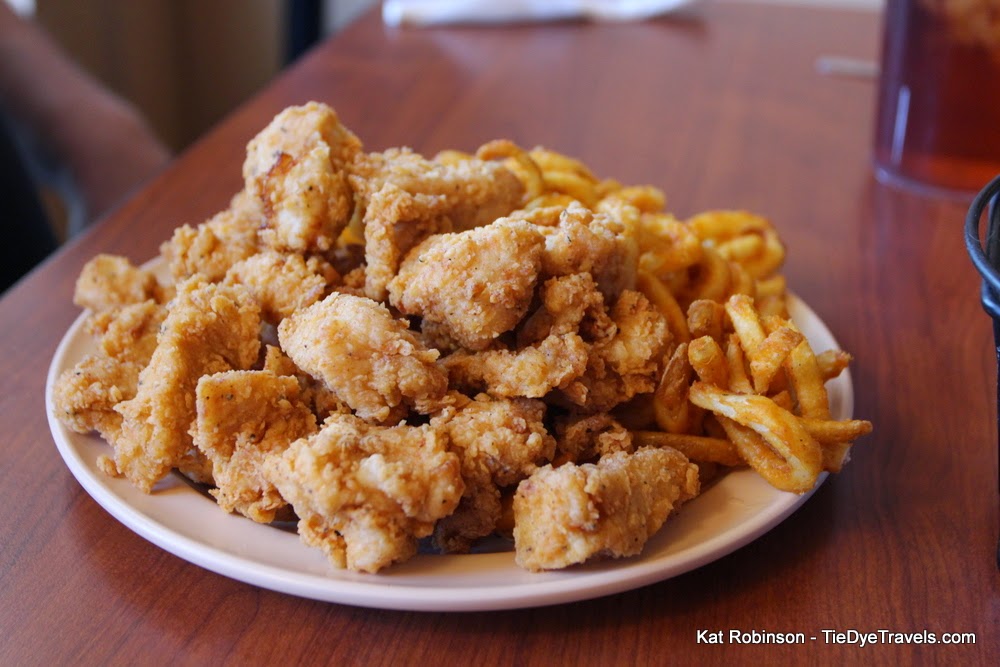 Mind you, that's a 10 inch plate.  For what appeared to be a relatively small order on the menu, it was massive, a pile of hand-breaded chicken pieces and curly fries (mind you, he'd ordered spicy fries) and some requested honey mustard.  I have to admit, I stole a piece of his chicken before I even shot my plate.  And it was ridiculously good -- just the right amount of salt and pepper and a hint of sage, but not enough of anything to overpower the chicken.  It was just right. 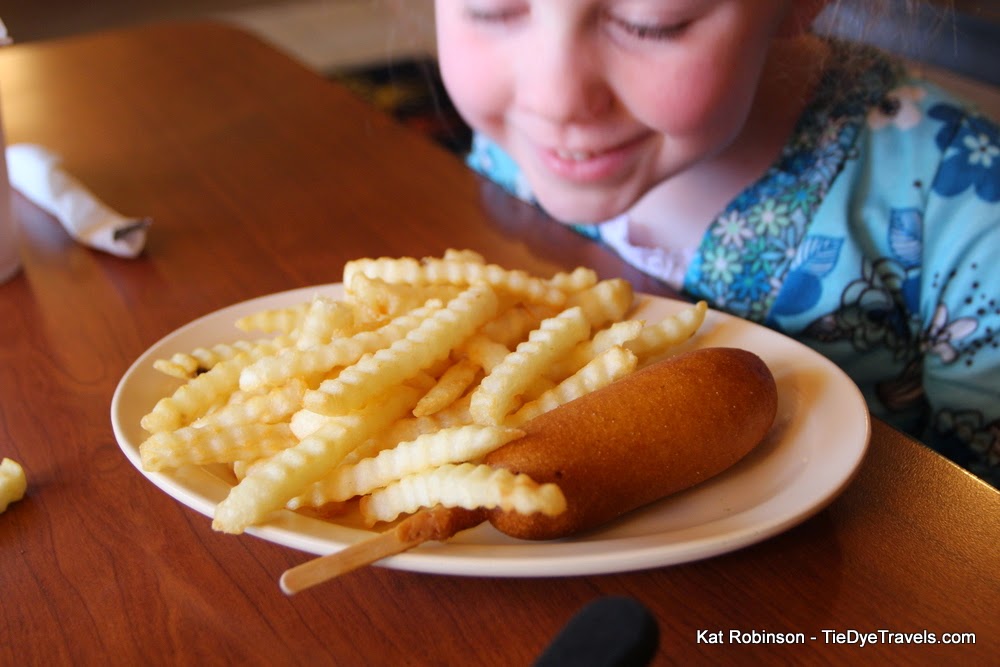 Hunter was already into her corndog and fries by this point... which I'm sharing with you because maybe you have a kid and you might want to see the size of the portion, too.  This made her happy, as did dipping her fries in Grav's honey mustard. 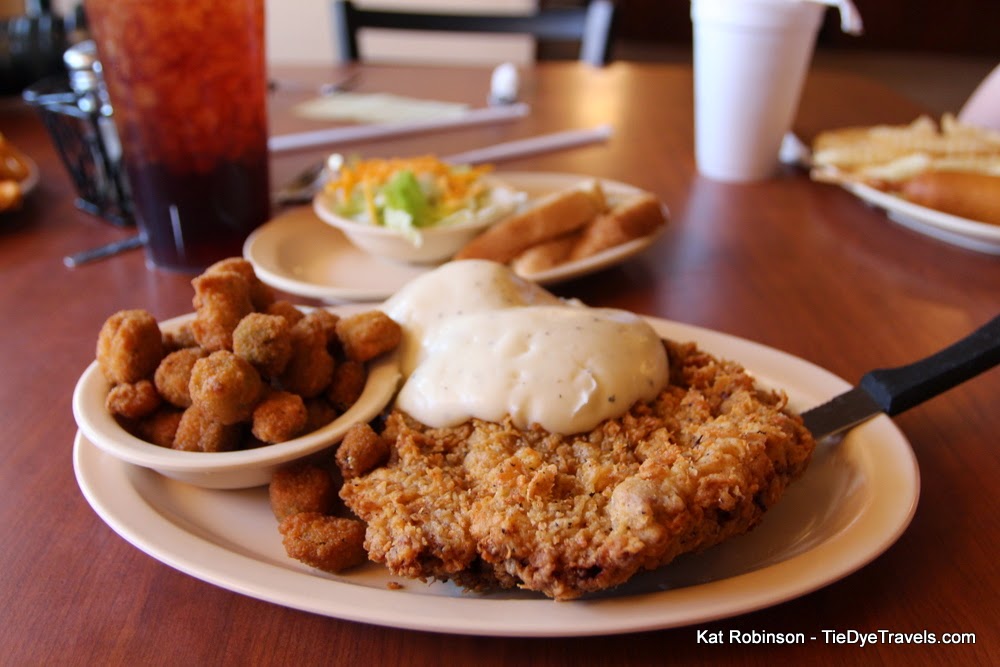 Me?  I was taking in the full meal I'd been granted.  Mind you, the salad was small and there wasn't much to it, but then there was this plate of massive, heavy brownishness that had come to the table. 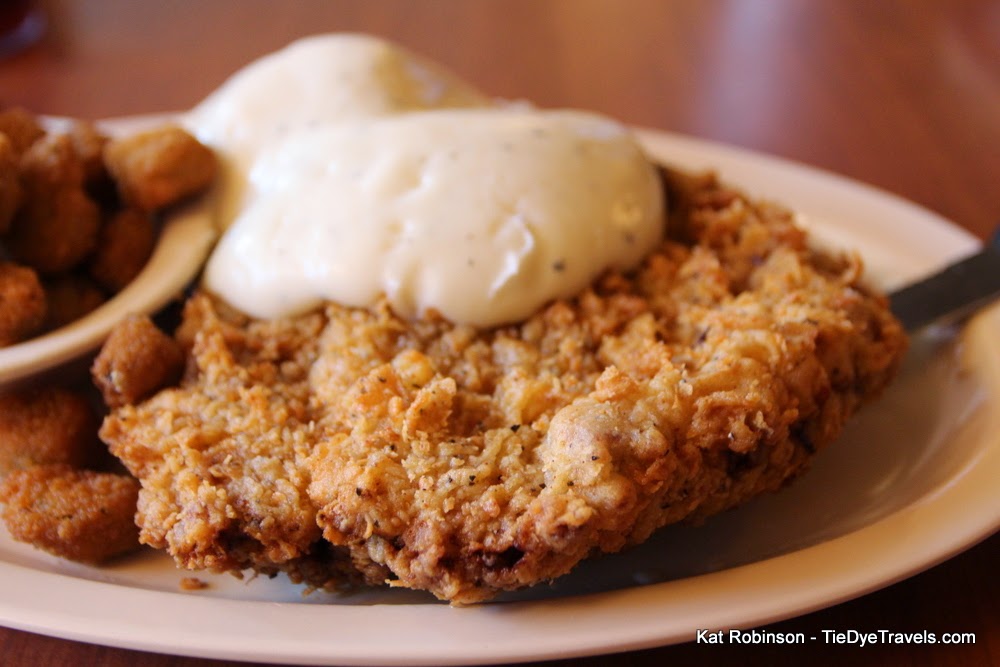 potatoes, both seeming to huddle under a blanket of white country flour gravy.  I'd gotten the fried okra as my side, and it was good, even poppable... but then there was the steak.  The crust was perfect.  The seasoning on the crust was pretty decent.  The meat?  Sadly, it was blander than I had expected, and for a moment I figured all was lost and I would also be dipping into that honey mustard sauce. 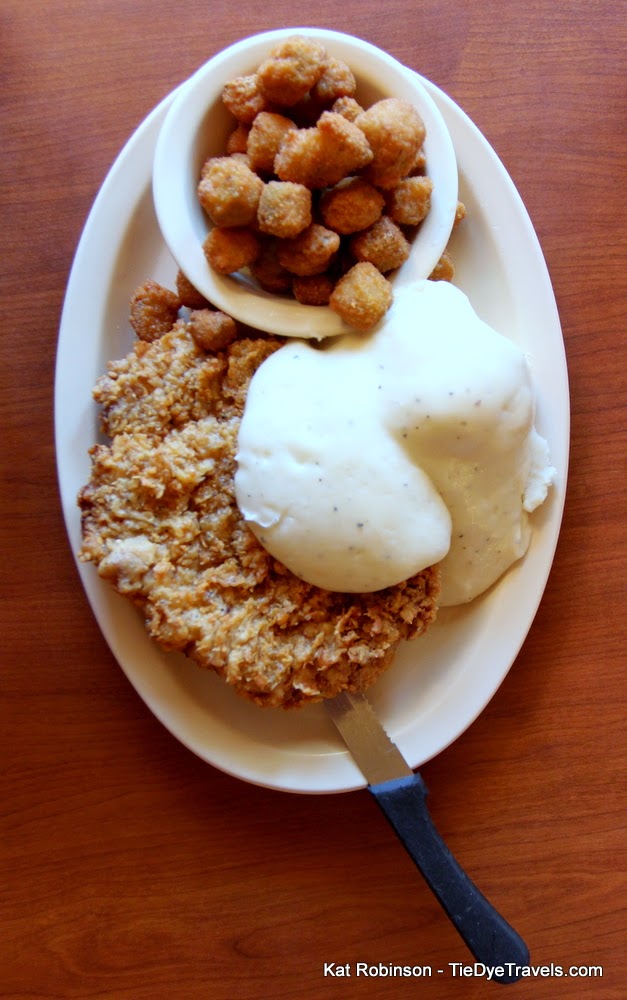 That was, until I got to the gravy, which was... absolutely perfect.  And the gravy elevated that chicken fried steak to something of a masterpiece.  Decades of refinement had to have brought that duo together to entertain and sustain the generations who had come here before.

Seems June's has been around.  Our waitress mentioned that the current owner's had the place for around 25 years, and before that it'd been in the family for who knows how long.  In fact, no one we talked with really knew how old the restaurant was, though I suspect it's in the 40 year range.  Another visit, when we're not traveling across the state, we'll drop in again and find out.

I will say, the food was very, very heavy, and though Hunter downed her corndog with ease, neither Grav or I could finish our plates.  To-go boxes were provided, and once we managed to nook and cranny Hunter into the packed backseat we hit the road again.

June's is definitely worth a look-in.  I was sad there was no room for dessert, and next time will likely get the Grilled Chicken Salad and ask them to substitute that really, really good boneless fried chicken on top.  You'll find it north of Interstate 40 off exit 265 on the west side of the road in the downtown area. 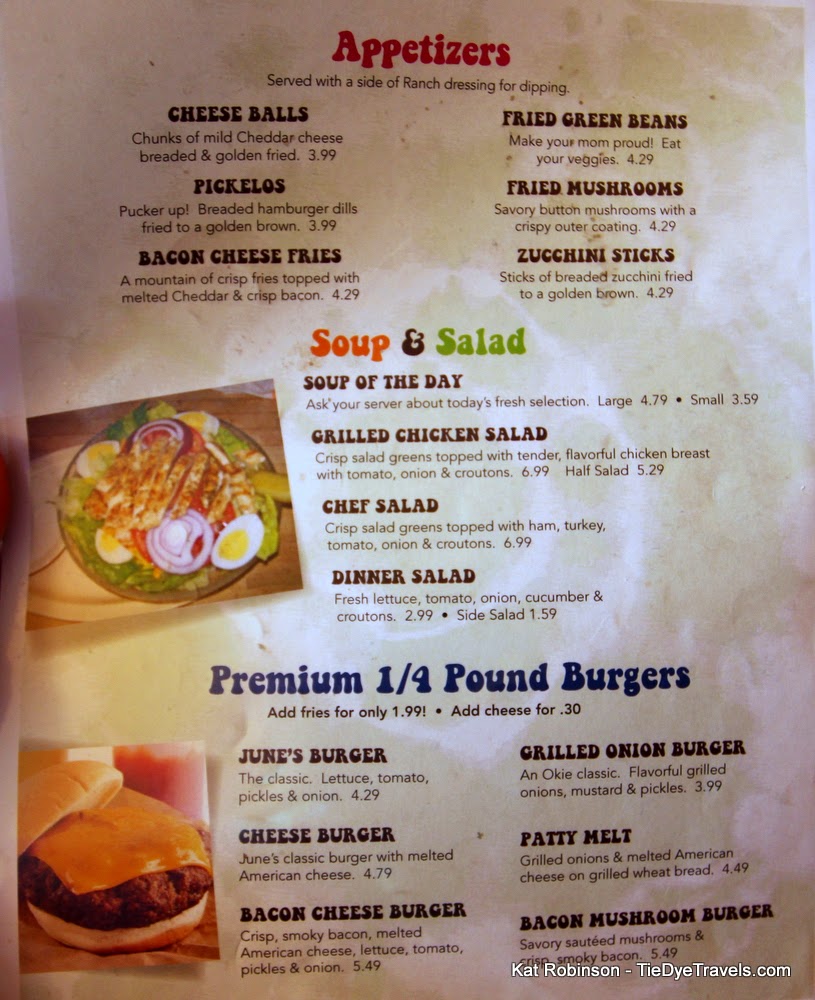 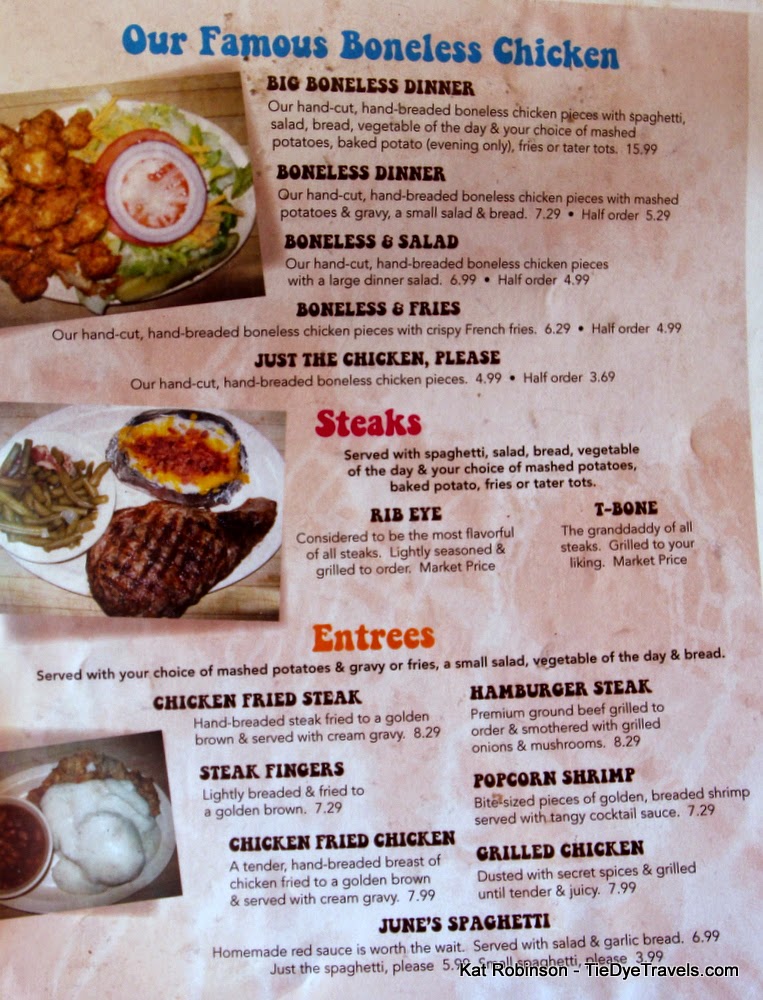 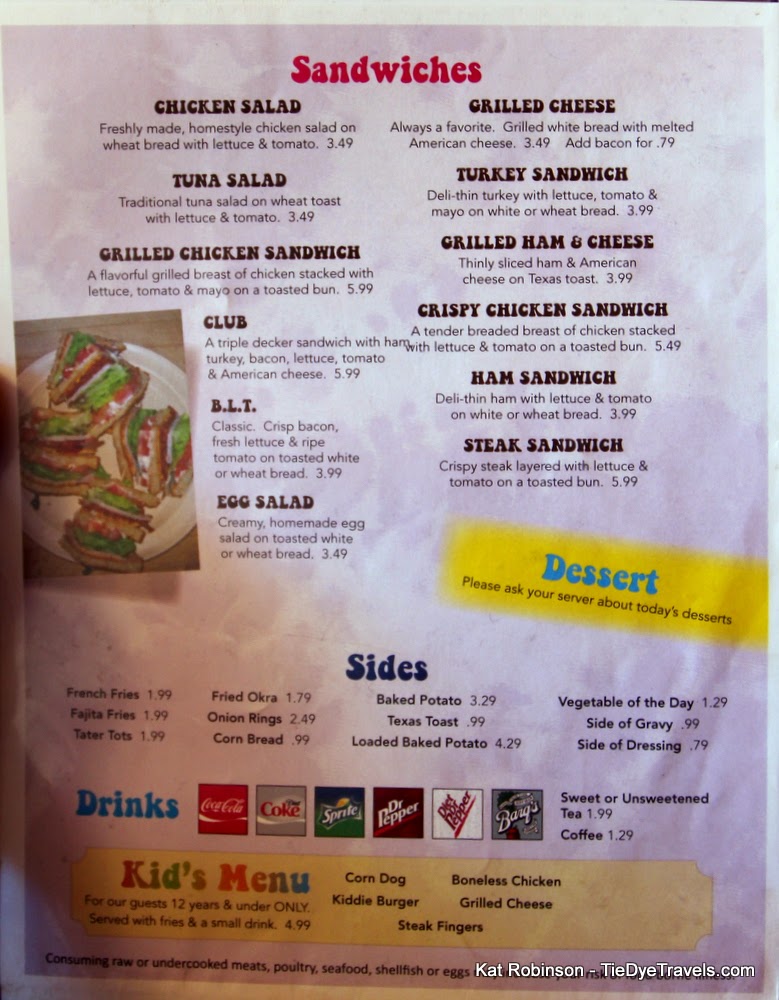