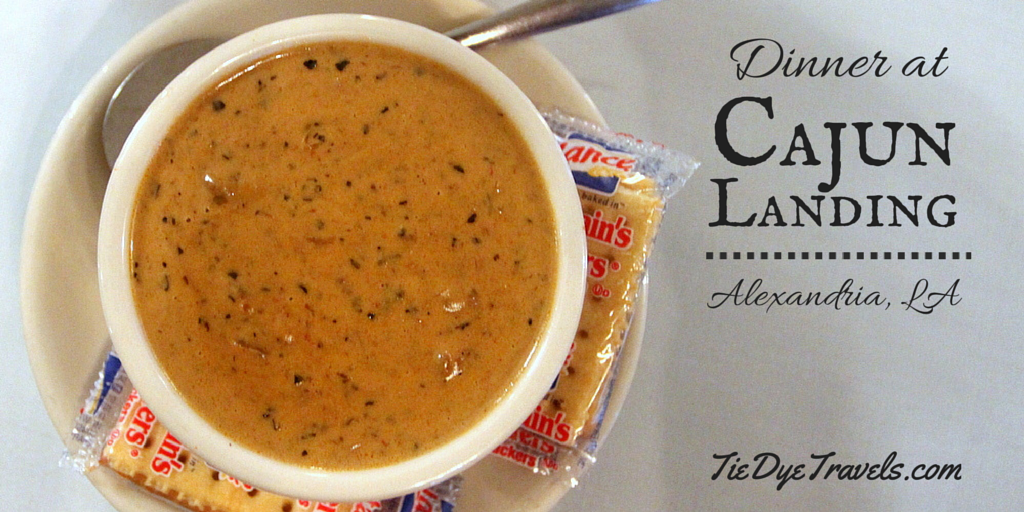 As I mentioned last month, Grav and I spent a goodly amount of time out-of-state attending different functions and completing assignments. While traveling from New Orleans to Dallas, we took a day and explored 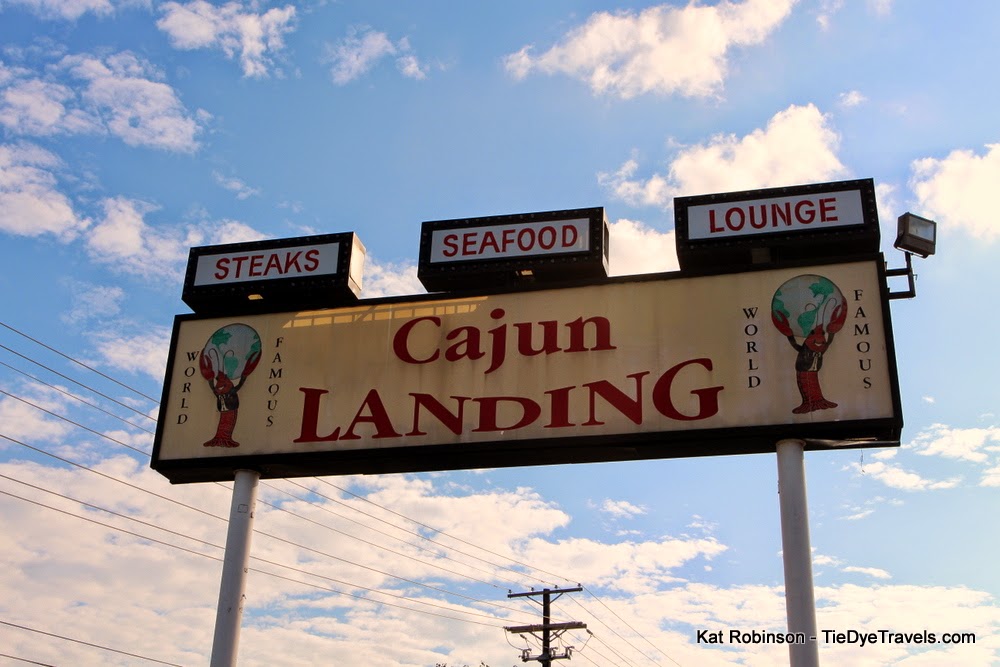 southern and western Louisiana.  I was quite happy to share with Grav a previous find, which turned out to be the day's highlight -- Cajun Landing in Alexandria.

I first discovered the restaurant on the north side of town while traveling with friends in 2002, and I've been back several times.  But this was the first chance I had since 2007 to step back through the doors for an early, leisurely dinner, and now I'm sharing that opportunity with y'all on the blog.  Because it was fantastic.

Cajun Landing started more than 20 years ago, and it feels like a permanent fixture for the town.  On my previous visits, I've fallen into the extraordinary Étouffée and delighted myself with the crabmeat and mushroom topped Chicken Pontchartrain.  And I've dreamed about the Seafood Bisque. 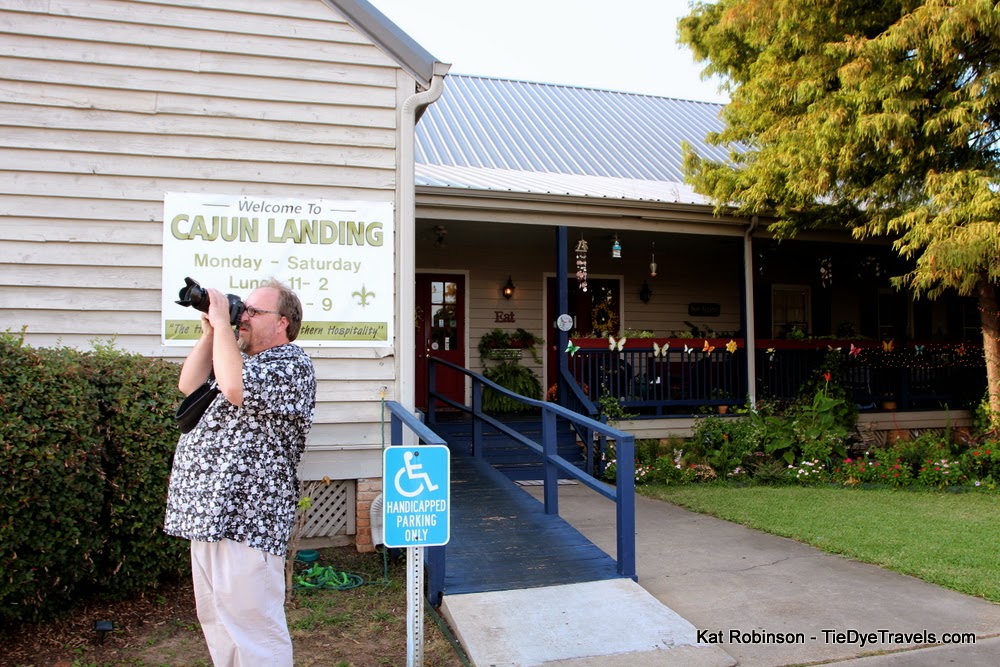 The restaurant is housed in what seems to be a giant old house, with one dining room leading to another.  There's a bar in there now, which I hadn't recalled before, but that doesn't mean it wasn't there before.  In past the entry room is the first large formal dining room, divided in the middle and 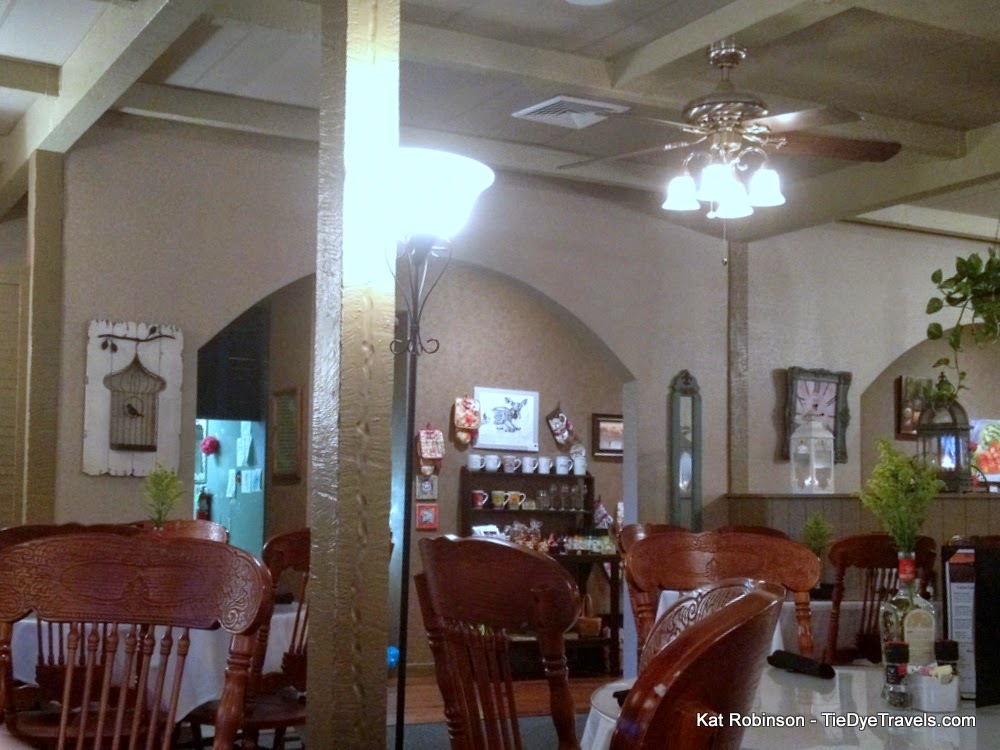 Our waitress was Geannie, and she was patient while Grav got settled from the drive.  She was even patient when we requested to move to another table to capture good light. 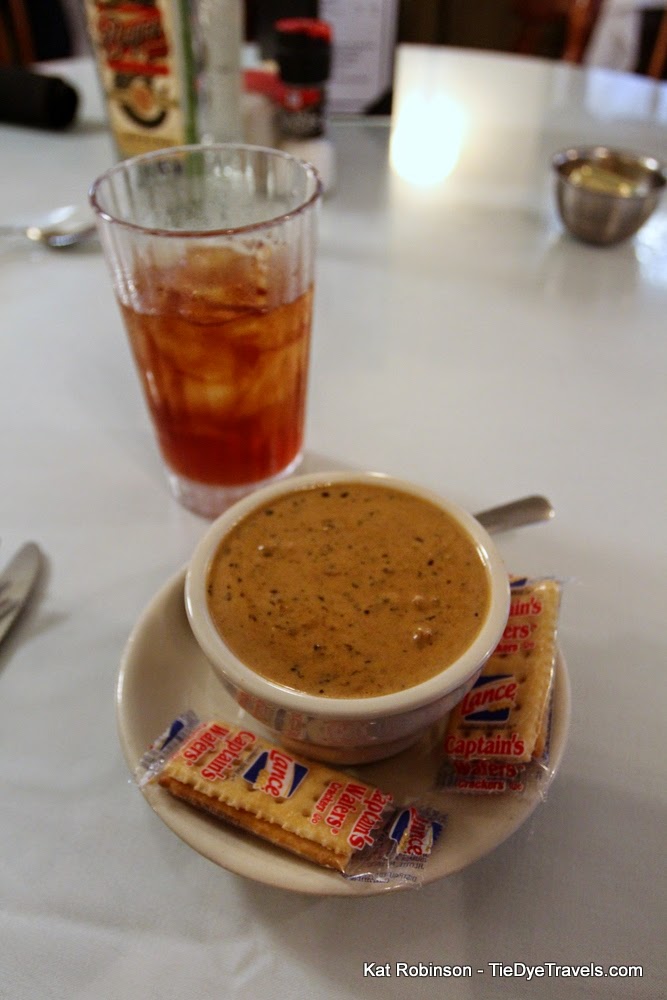 Once our orders were placed, our soups were brought to the table.  With entrees, there's a choice of soup or salad, and really -- you should just get the Seafood Bisque and be done with it.  Order a salad if you like, on the side, but take a few minutes and savor this wonder.

And I mean savor.  Impossibly packed with savory and sharp spices, layers of heat and cream, chunks of crabmeat and crawfish, Cajun Landing's Seafood Bisque will make you shed a tear not for spiciness or pain but for the delectable elegance of it all.  It is a masterpiece. 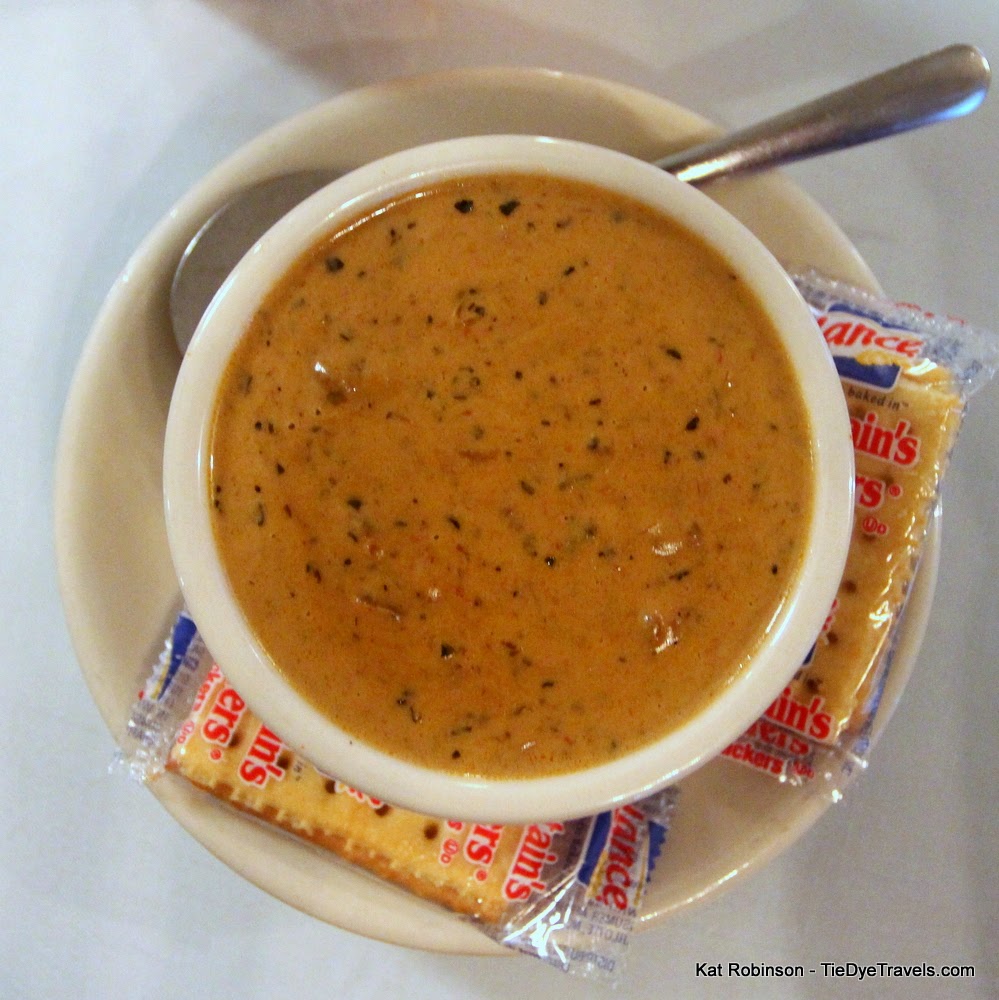 And, as we found out, the recipe's for sale for $5, which we happily added to our bill. 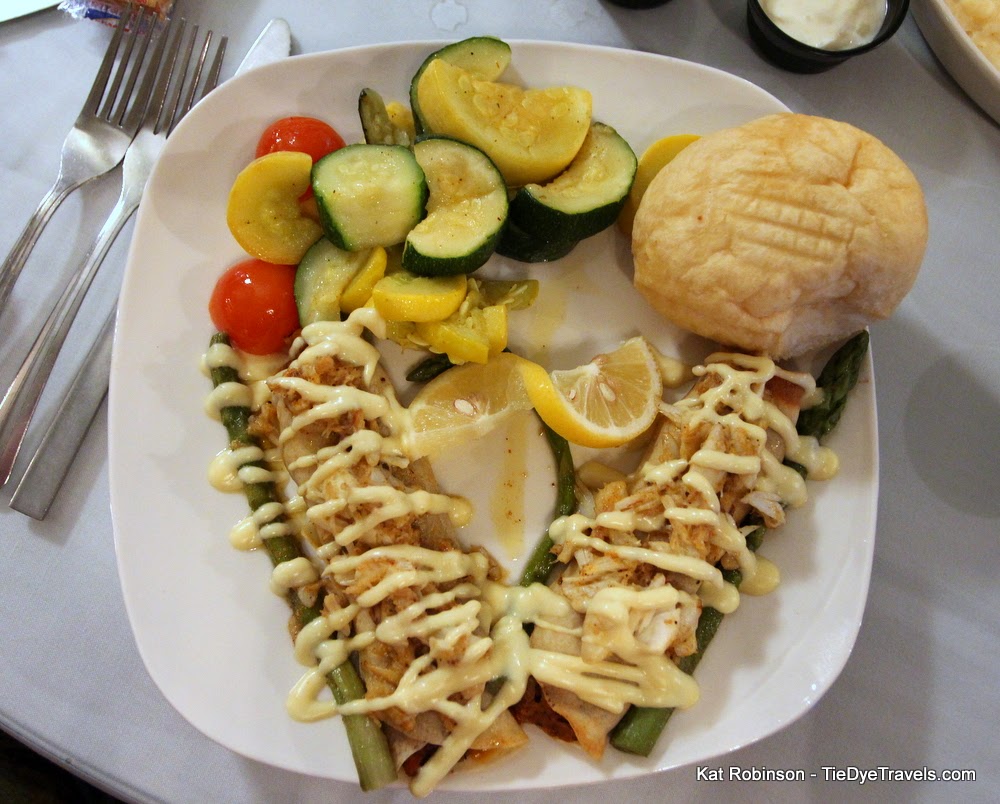 Of course, meals followed, though we were quite happy where we sat already.  Grav had chosen the Seafood Crepes and he was not disappointed.  Two thick rolls of crepes paired with asparagus spears drizzled with Hollandaise sauce, packed with sauce and shrimp and crawfish tails and topped with large lumps of crabmeat, absolutely 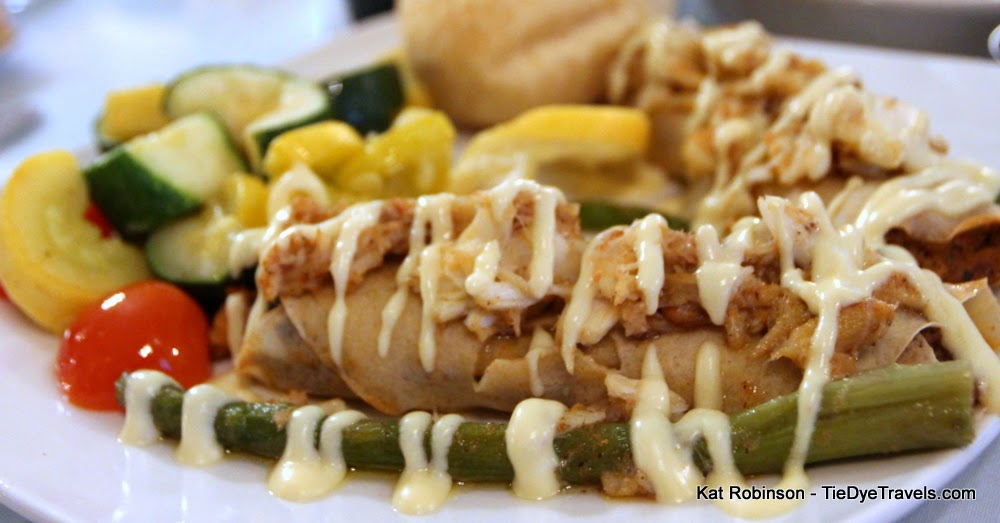 heavenly in every respect.  The side item in this case was a mixed squash and zucchini medley.

I had chosen the Southern Style Seafood Platter and felt I had also chosen well.  Unlike the 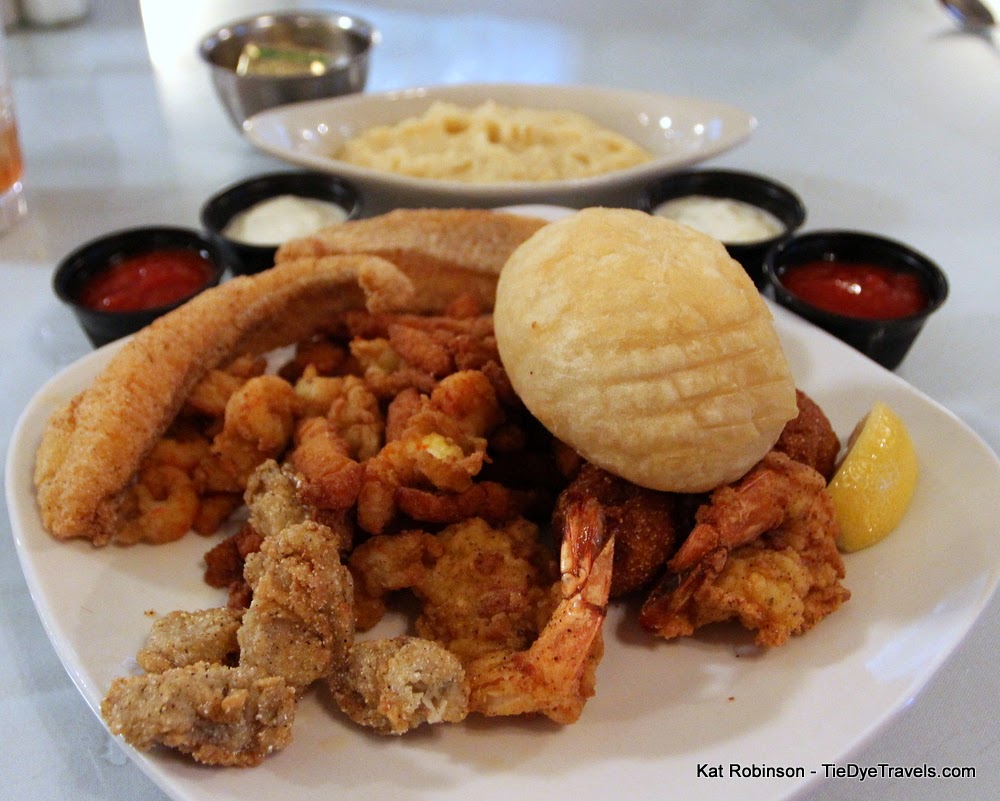 dainty yet substantial crepes, this was good old fashioned seafood at its finest, in all its variations.  There were juicy fried oysters with plenty of flavor, ethereally light catfish fillets, curly well-spiced tail-on fried shrimp and a red and not-so-red wave of crawfish tails and fried clams.  The plate came with both cocktail sauce and tartar sauce 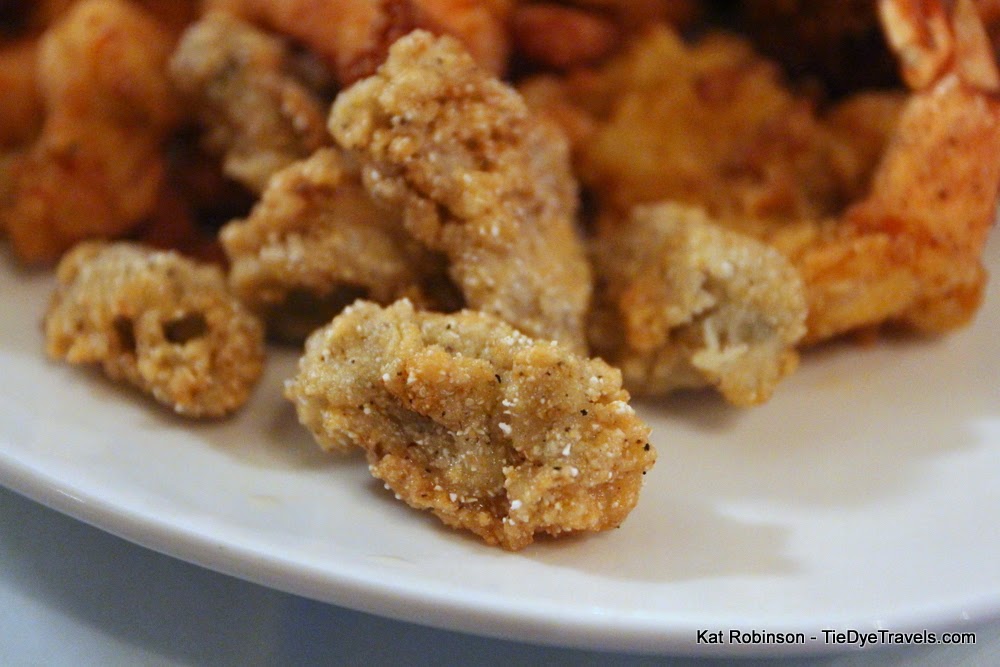 and a side item, this time garlic mashed potatoes that I didn't really touch until I ate them later with my fingers in a Dallas hotel room.  Maybe that's oversharing. It was a FEAST.

Both our meals were delivered with splendidly crispy-surfaced rolls -- 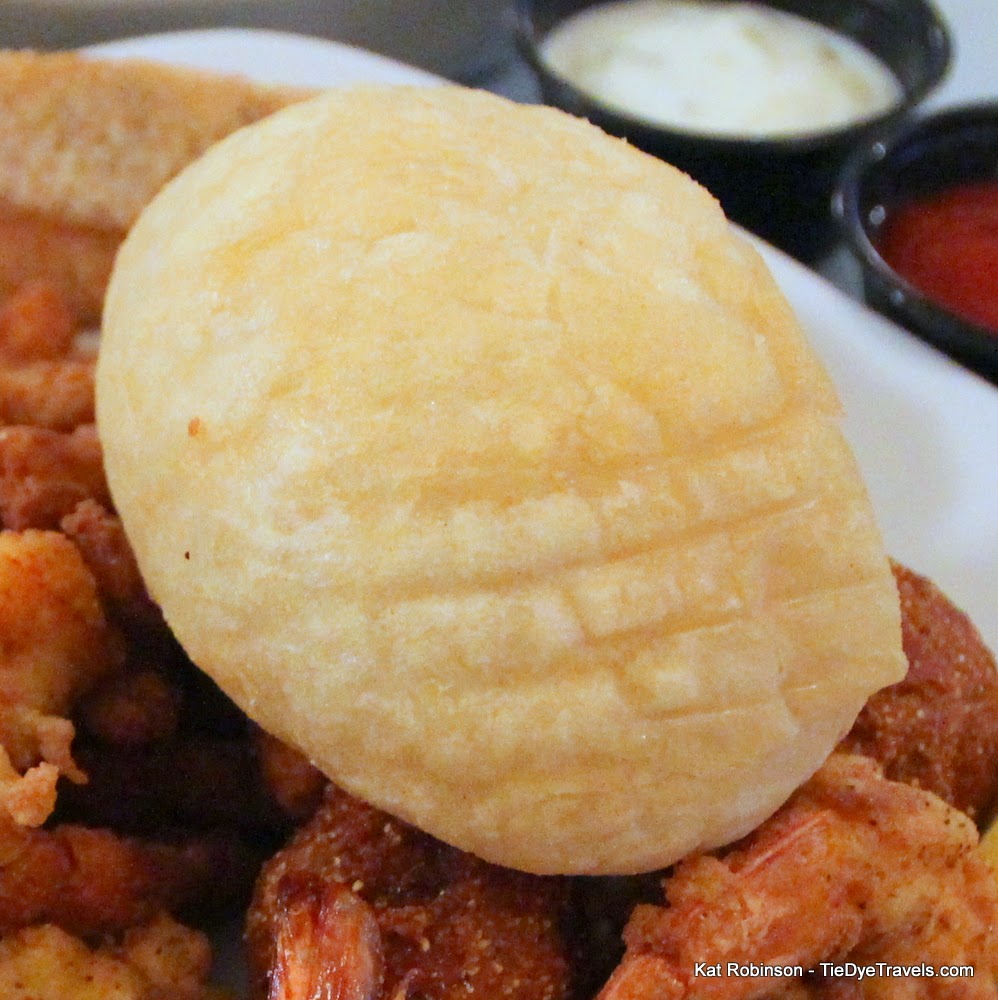 which we found are actually baked and then lightly fried to obtain that level of perfection.

These meals would have suited us well on their own, and we would both have happily rolled out the door and onto the highway well-satisfied, but Geannie talked us into a dessert.  Well known for their bread pudding, Cajun Landing also offers creme brulee (which I've had, and it's fantastic) and Key lime pie (which I've also had, and it's marvelous, too).  But this time we chose a dessert I hadn't sampled -- a deep fried cheesecake. 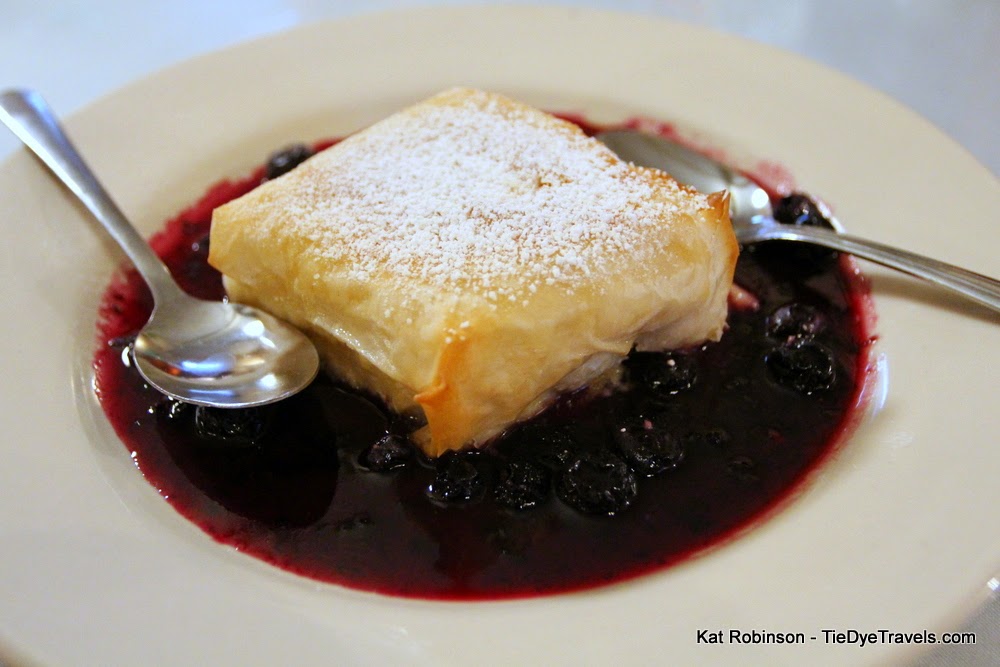 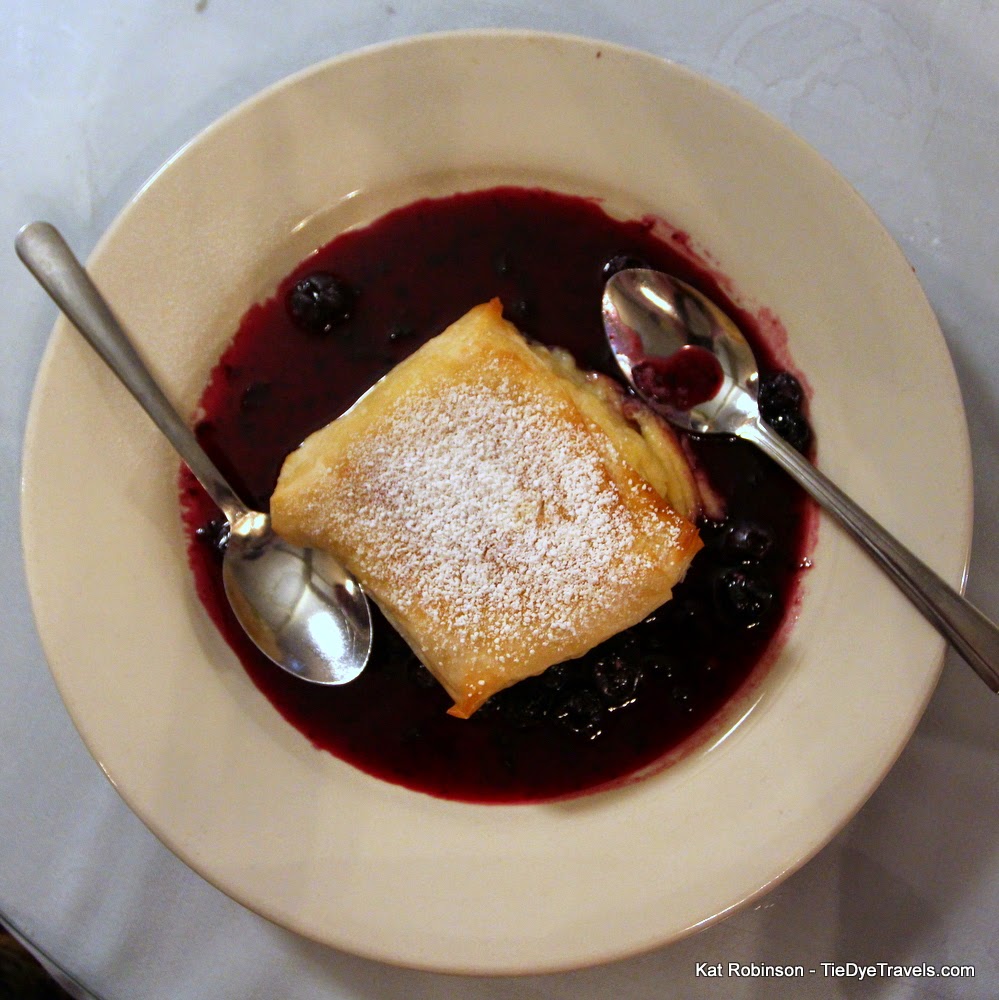 This large square of house recipe cheesecake had been wrapped in wonton, deep fried, surrounded by blueberries in juice and lightly threatened with powdered sugar.  We claimed between the two of us that we'd never finish it.  Moments later, we were dueling spoons over the very last moist crumbles of cheesecake and dribbles of blueberry sauce.  We also contemplated the possibilities of moving our 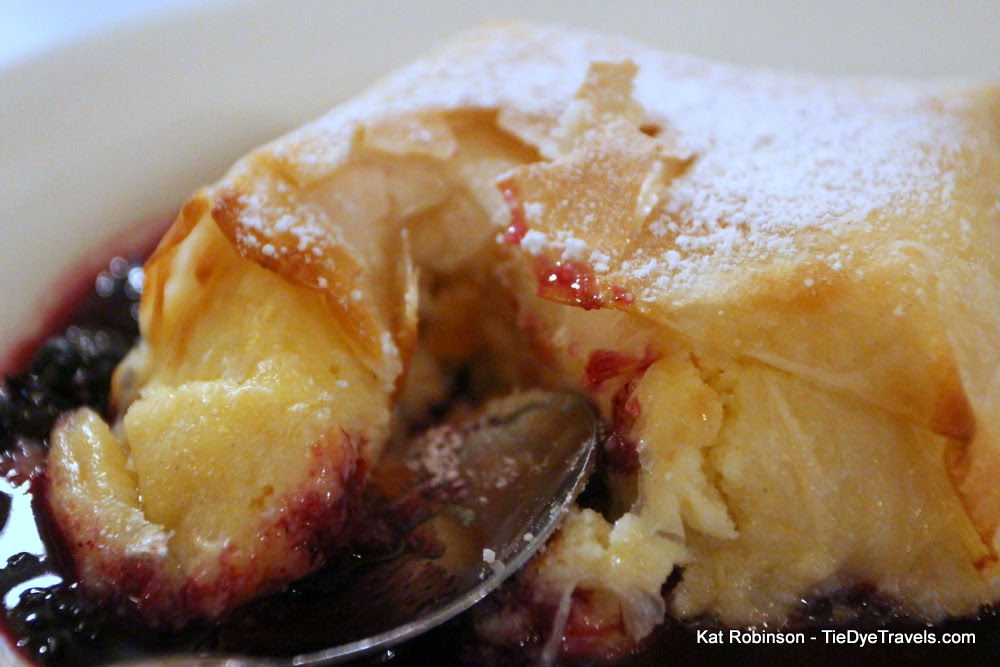 hotel reservations so we could recuperate from our self-induced dining overindulgence, but more assignments down the road awaited.

Mind you, I love Arkansas and its wide variety of restaurants.  But I'd sure love to have a bisque that worthy offered here 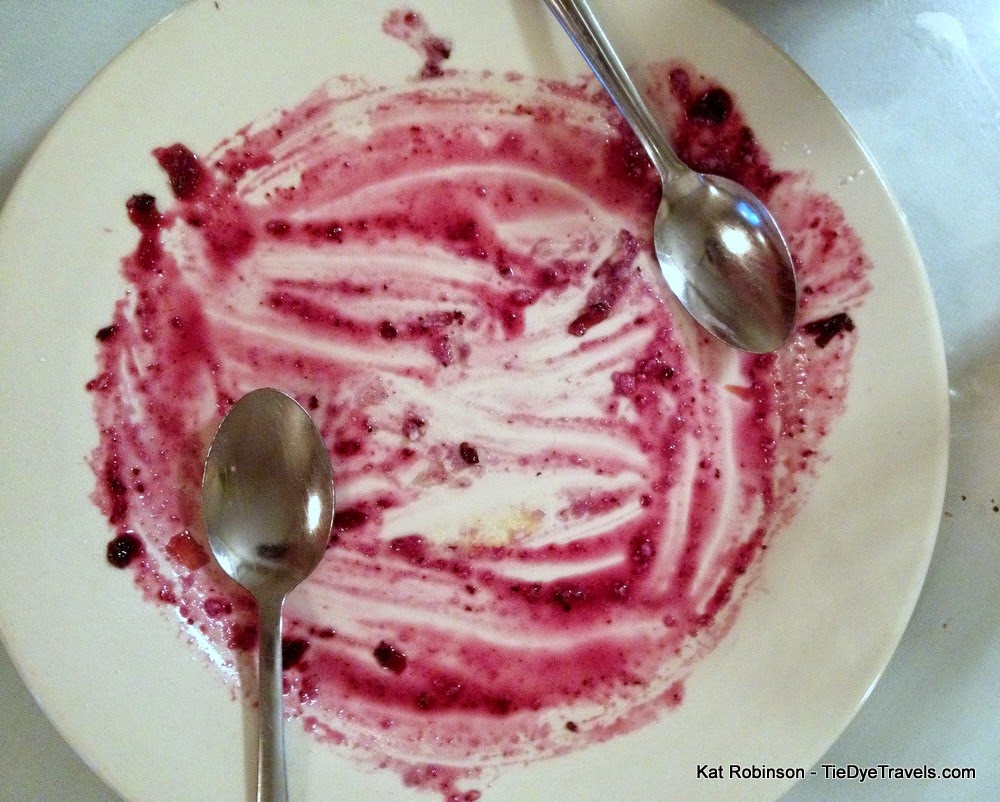 rather than so far to our south.  Alas, I'll have to settle for the occasional journey down I-49 to this pleasant place, and thank heavens that it isn't closer and I can never grow tired of what it has to offer. 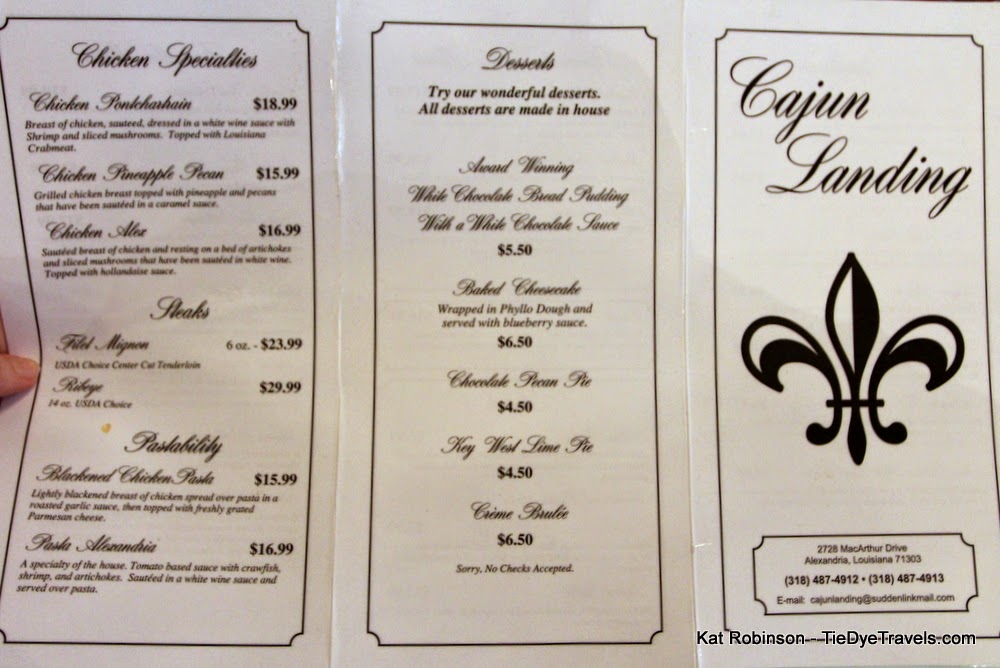 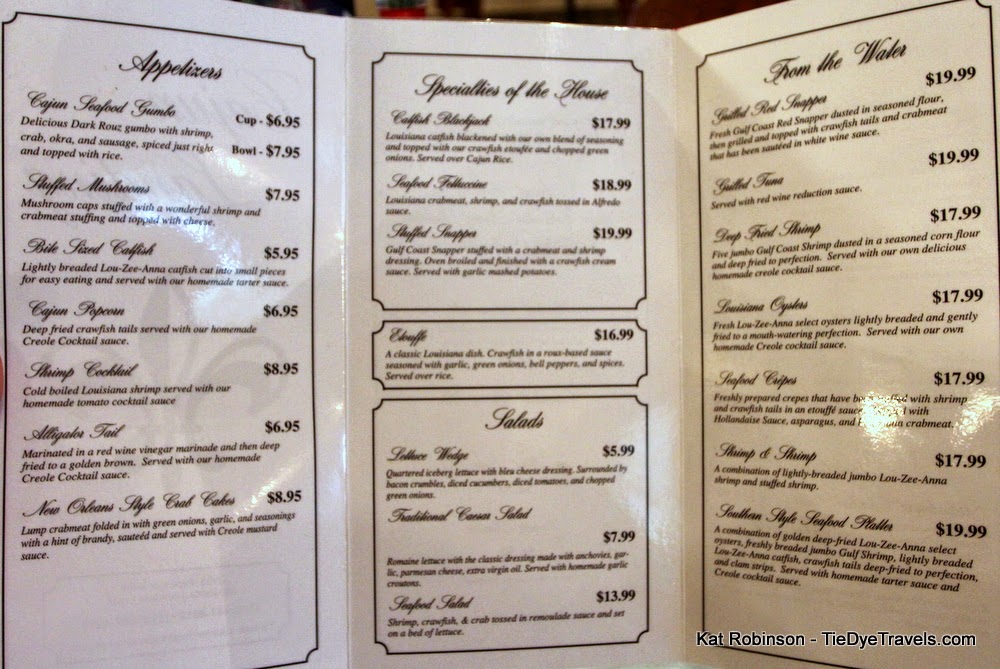