More Than 40 Years of Cajun's Wharf. 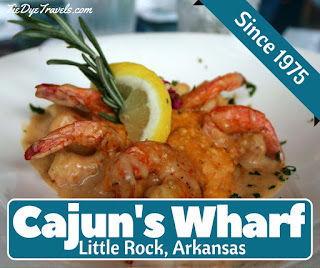 There's a lot about the cool Louisiana-inspired eatery along the Arkansas River just outside of downtown Little Rock you should know about - from its history to its varied menu.

Saturday, I joined a group of ladies who are fellow members of the Arkansas Women Bloggers to check out Cajun's.  Unlike most of the attendees, I have a history here.  I've been visiting Cajun's since the 1970s, on-and-off towed there with different individuals and later hanging out there a bit myself.  I don't visit as often as I should, but that probably needs to change. 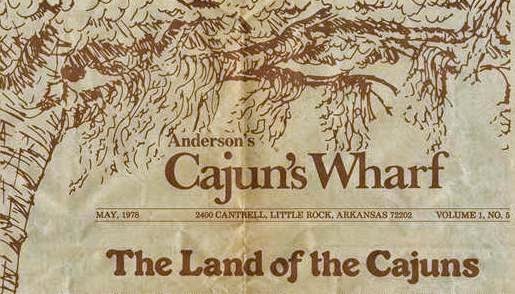 The original Cajun's was opened way back in March 1975 by Bruce Anderson, who (and correct me if I'm wrong, since I'm still researching) already had restaurant ties since his daddy had Anderson's Grill up at Beebe.  Cajun's quickly 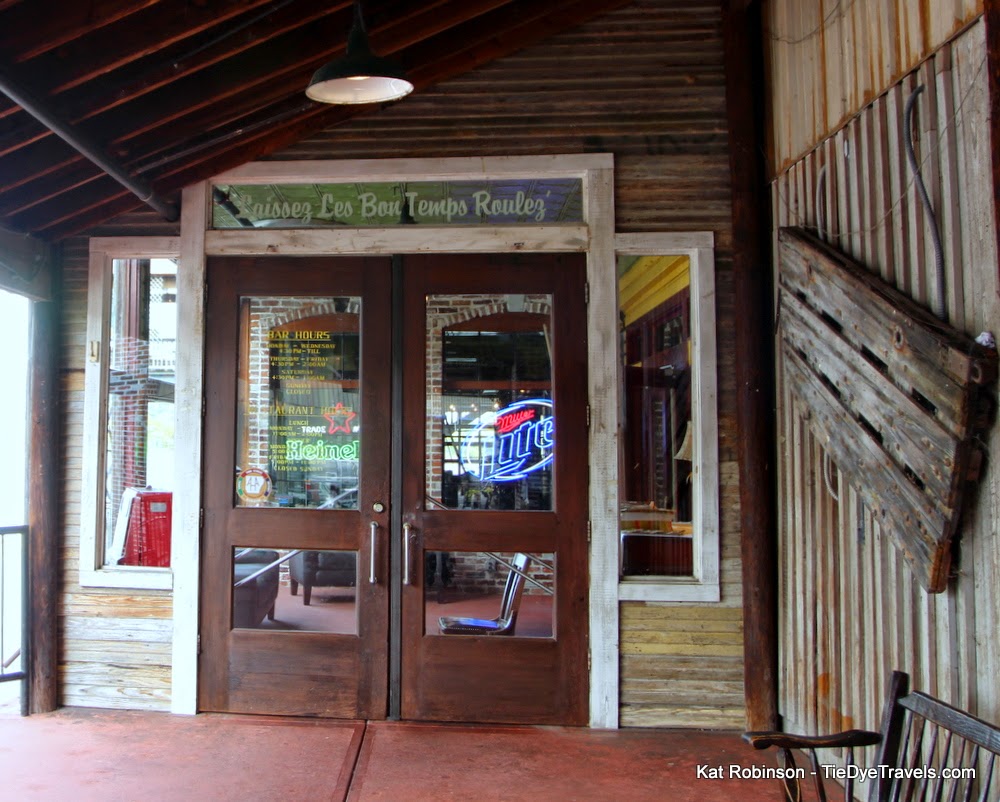 became a popular place to dine, drink and debate the finer points of life.  It was pretty big back then -- 20,000 square feet overlooking the Arkansas River from a line of what were just warehouses.  But it was cool.  It was part of the Little Rock scene before I-630 or west Little Rock, 20 years before the River Market.  Bruce Anderson hired Ringgold into Cajun's Wharf in the 1980s and she stuck with it and eventually ended up in the ownership of the restaurant.

Then in the 1990s the Landrys folks came knocking, and it was a good time to go do something else like the international travel Ringgold wanted to try.  Landry's came in, and (this, of course, is editorializing), there was a collective groan from some of the restaurant's regulars (okay, not so much editorializing, I remember the groans personally).  Without its original team and under the auspices of a company that runs hundreds of other joints, Cajun's lost its soul.

Couple of years later, Ringgold wanted to get back into the restaurant business.  "I got back and decided I wanted to assemble the team of people I wanted to work with.  I wanted to wake up every day and know I'd enjoy the people that I work with," Ringgold told our group. "I knew it'd be a great culture and we'd be able to do things to give back, and to do that you sorta have to be a little entrepreneurial, to be in control of your life and your resources.

"To do that, I assembled three partners, one of whom was my sister, who had vacated from Vermont, her kids were both in college and she was empty nesting.  I said 'come down here and we'll figure out what we can do.' So my sister (Sandy Chance), Marilyn Green - who I hired back in 1986 and did all my banquet and catering and helped us develop that whole department - and James Willis, who's back in the kitchen today and started at 16 years old as a dishwasher.  So those were my three business partners.  We're not stockholders by day, We do this 100 percent of the time."

The group Ringgold assembled opened Caper's in west Little Rock on Highway 10 back in 1997.  And in 1999, Landry's came calling. 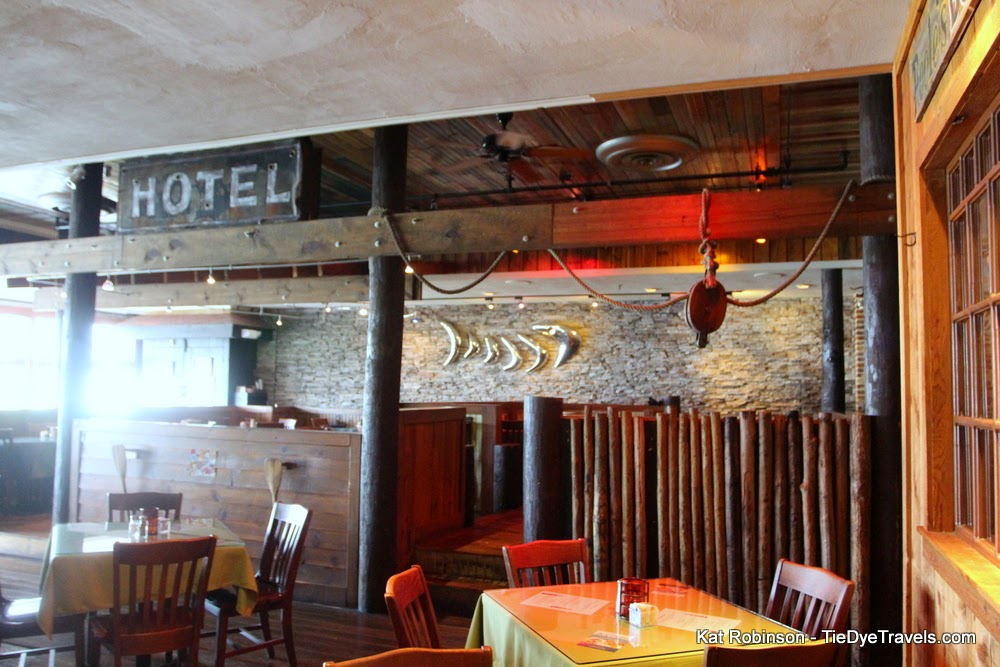 "They'd taken our very successful, six mil a year operation and put it down into the bowels.  They were doing million when I got it back from them.  And they had been basically contacting me for five years saying 'you have any interest in coming back? Coming with us?' And I knew 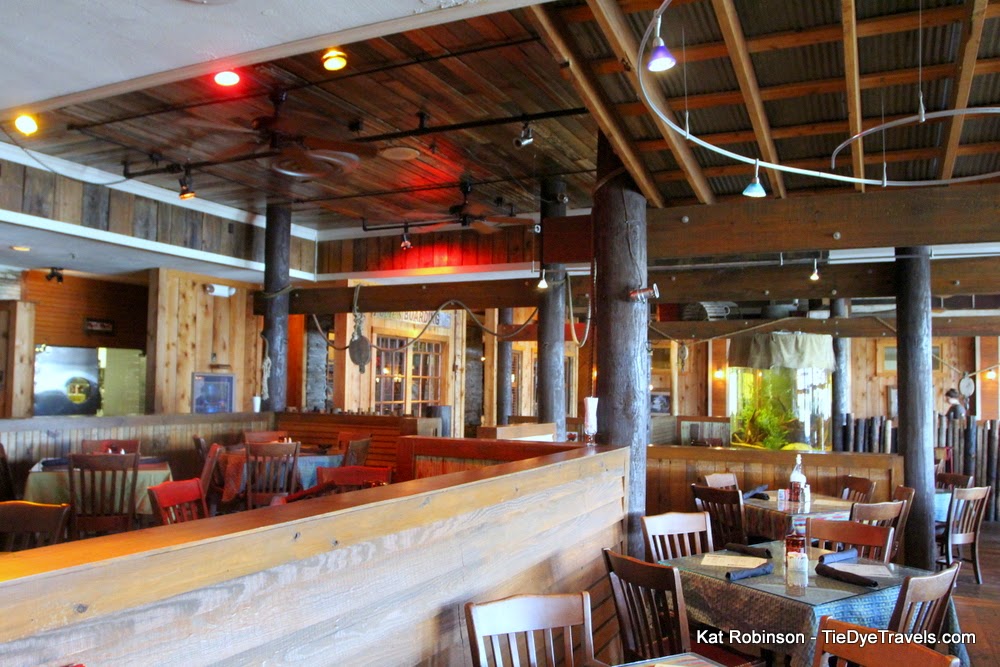 what their sales were, so I said 'consider me your exit strategy. Call me and I'll come take it back over.'  So that's basically what we did. They left in June of '99, I shut it down and reopened in October.  And by that time we had gutted everything they'd put in the restaurant, opened it up and did about five million dollars that first year. And people were just happy to have us back."

In 2007, Ringgold stepped out again with another idea and sparked up Copper Grill downtown.  I'll be talking about Copper Grill at some other point, you betcha.

So, Cajun's Wharf.  Lots of good music and good food.  If you like loud date nights, it's excellent.  If you want to impress someone, go wine and dine down there.  The food's always excellent.  Okay, now I'm starting to sound like an ad... sorry... it's just that I like Cajun's and, for whatever reason, it skips my radar on date nights.  Maybe I need to have more date nights.

Actually, the big reason I don't do a lot of Cajun's is, it's an evening dining place.  I have a young child, and... I dunno, it's out on the river and close to downtown and once I get settled after working all day it's just... I almost said too far away, but I'm not going to.  Frankly, there's no good reason and I'm going to rectify that soon.

The biggest reason, though, has been lunch, or Cajun's lack thereof.  I'll hit about any lunch place around because as a parent with a child in school, it's the one meal of the day I might have to myself. Also, light's better for shooting.  Also...

Okay, I'm a cheapskate. Or budget-minded, as it were.  I'm trying to pinch every bit out of every penny, which
means I often visit restaurants for lunch rather than dinner.  Smaller portions, sure, but smaller checks and, as I said, the light is better.

So Cajun's Wharf is doing something new.  It's open for lunch now.  Monday through Friday, 11 a.m. to 2 p.m., it'll be open for folks
wanting to drive over and get a good meal before heading back to work.  That's grand.

We tried a lot of stuff... and for once, I did not get the shrimp enchiladas, surprise there.  We sampled a lot of different appetizers, including the Crab Au Gratin, which I will now always order every single
damn time I go because I could eat that stuff on toast, it's so dang good.  We shared Oysters Bienville, which are my second-favorite way of consuming oysters (I also love them very fresh and very raw).  We debated over the marvelous Shrimp and Crawfish Cakes and dribbled remoulade on our Blackened Chicken Eggrolls and dipped our chips into the heart-packed Artichoke Dip and their lovely dusted pita chips. 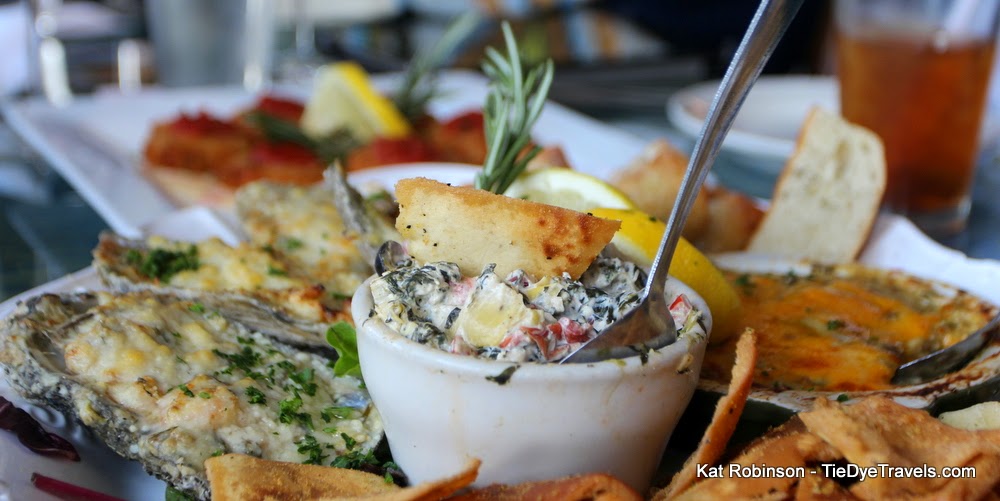 And I chose so wisely.  Mind you, if you go, you should get the etouffee if you want a soup, but I had the special, which was a mushroom brie soup, and I could drink that stuff by the pitcher.  Dadgum, it was marvelous.  I wish it were on the menu all the time.

So, one of my dining companions had those ridiculous Shrimp Enchiladas, which for once I did not have, and here's what they look like.  And they are great.  They really are. 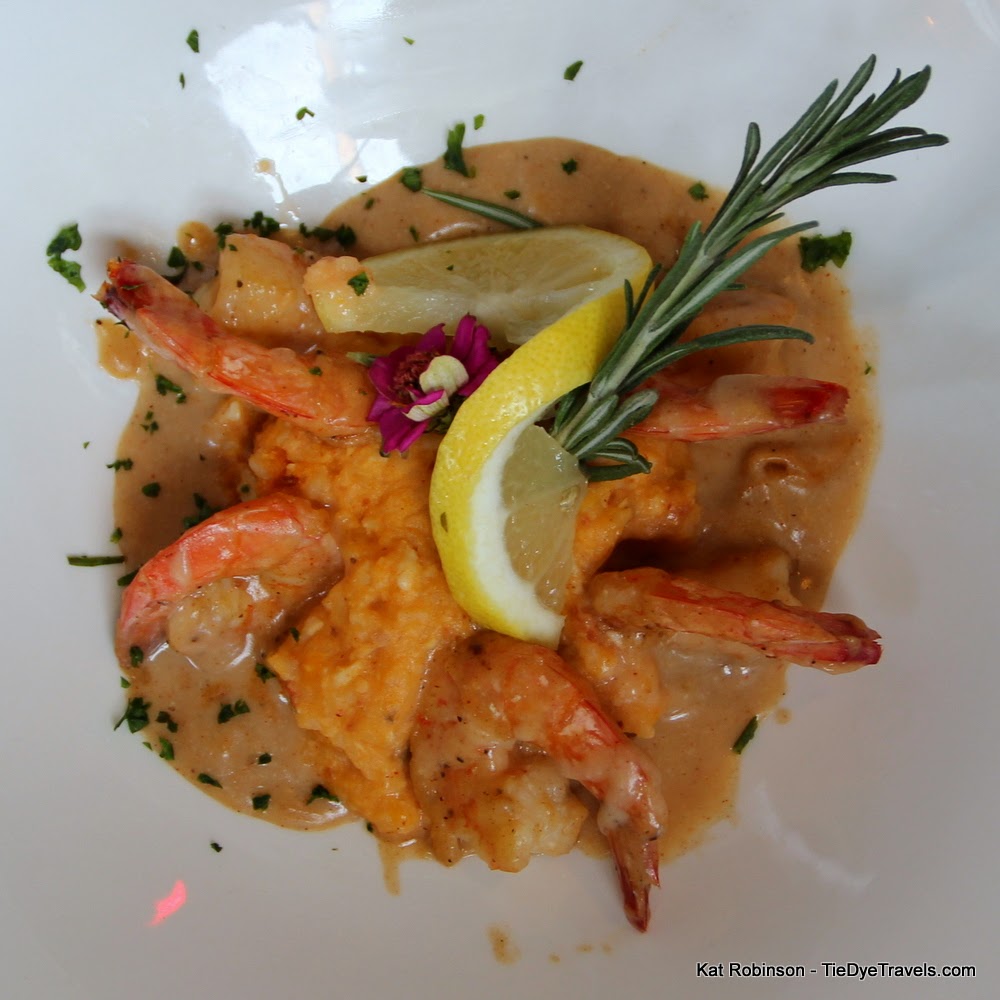 And I had some BBQ Shrimp, which weren't quite as barbeque-y as I thought they'd be, but boy were they packed with a lot of Creole-induced spice.  They were huge.  And they were served on top of a bell pepper heavy serving of grits.  Not bad at all.

The Pan-Seared Grouper is there... as are the Crispy Fish Tacos and of course the Kentucky Hot Brown.  I can't imagine a Cajun's
menu without it.  And there are Cajun Po'Boys in the friedness of shrimp, catfish or oysters that I will be dragging (okay, maybe not dragging) Grav down to try soon -- he loves a good fried oyster. Arkansas Fresh Bakery is making the buns, by the way.

So there's all of this, featuring the never-frozen seafood Mary Beth makes sure comes in all the time (she has a strong distaste for chemical-packed seafood, and she'll give you an earful about it, good for her).  And then, I'm not certain why, there's a Deconstructed Jumbo Artisan Hot Dog.  I almost tried it.  After all, it is hard for me to turn my back on a chili dog, and this one comes
with a premium beef dog and chili and cheese and onions and coleslaw and -- but it just seems WRONG to get a chili dog at a Cajun place, it just does!

And we sampled through all these desserts -- an Oreo cheesecake, pumpkin cheesecake, coconut cream pie, bread pudding, the unusual

but almost irresistible Chocolate Ganache Key Lime pie and the chocolate creme Brule -- and I know Grav will make fun of me for this, but I still love the last one of those so much I will forsake all the others. 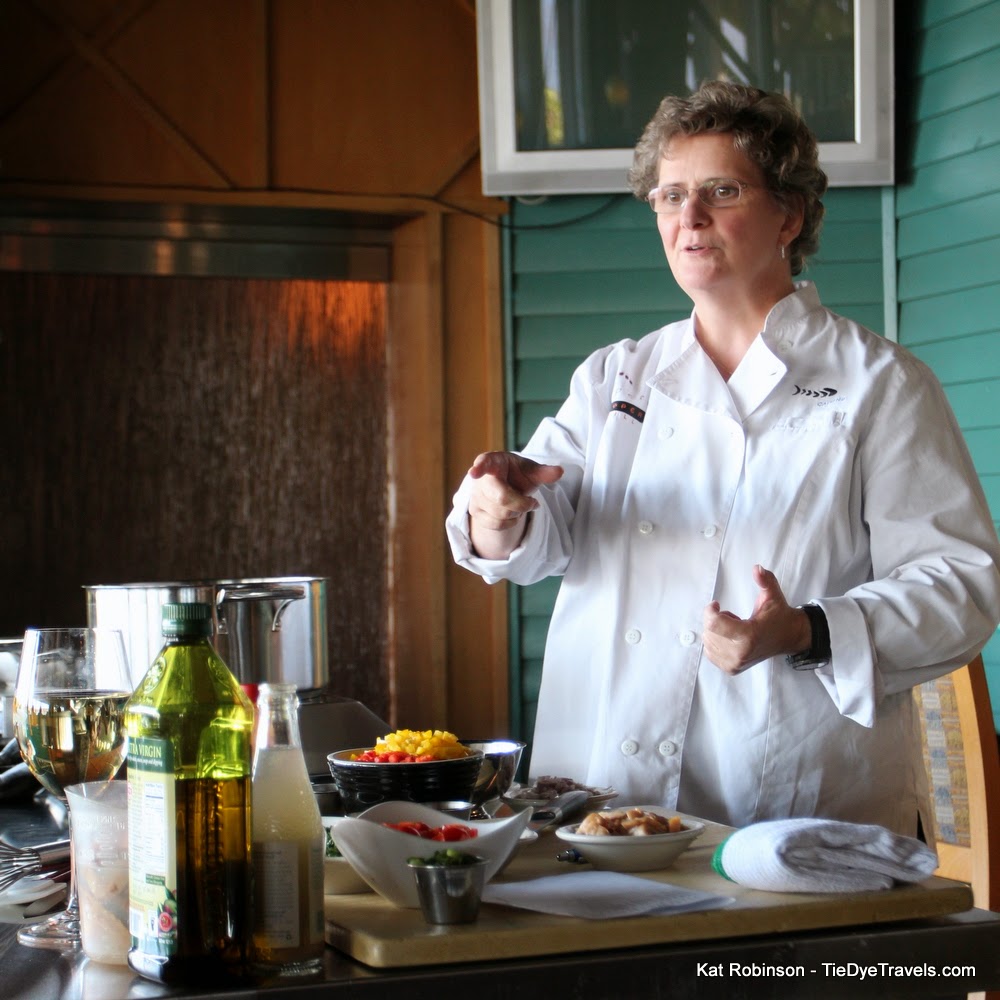 I wanted to stick around... Mary Beth gave a cooking demonstration after lunch where she showed everyone how to make Mussels and Clams in Tomato Broth, and then there was a whiskey tasting and apparently lots of cocktails afterwards.  But I had work in the form of book signings and such, and I missed out.  Probably for the best, since I had no designated driver.

Anyway... you thought this was going to be short.  So did I.  Ah well.  Cajun's is doing lunch, and I bet it catches on, because Cajun's.  I mean, when you grow up here, especially at my age, Cajun's Wharf is just part of the fabric of dining life. Now maybe I'll get my butt out there more, maybe spend some time on the deck once it warms back up.  And maybe I can get some more of that dang mushroom brie soup.  Maybe. 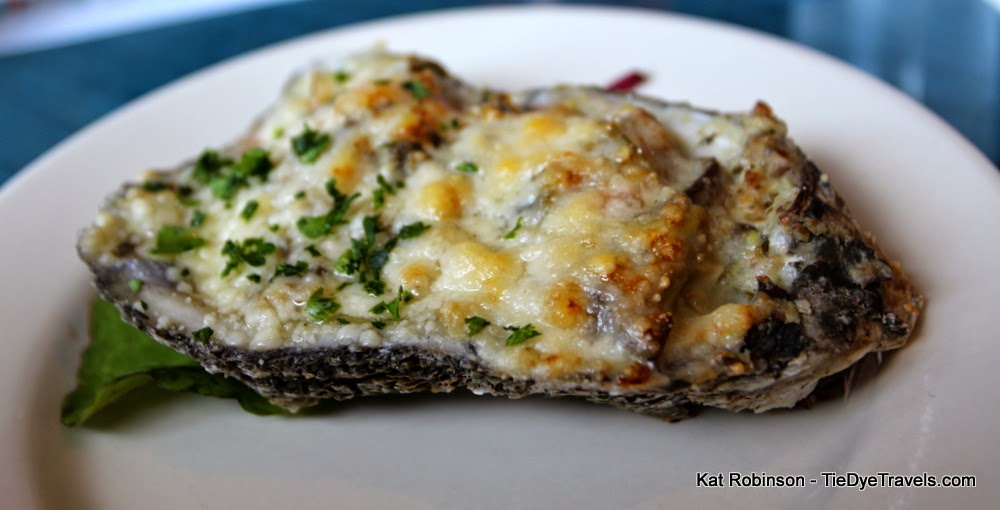 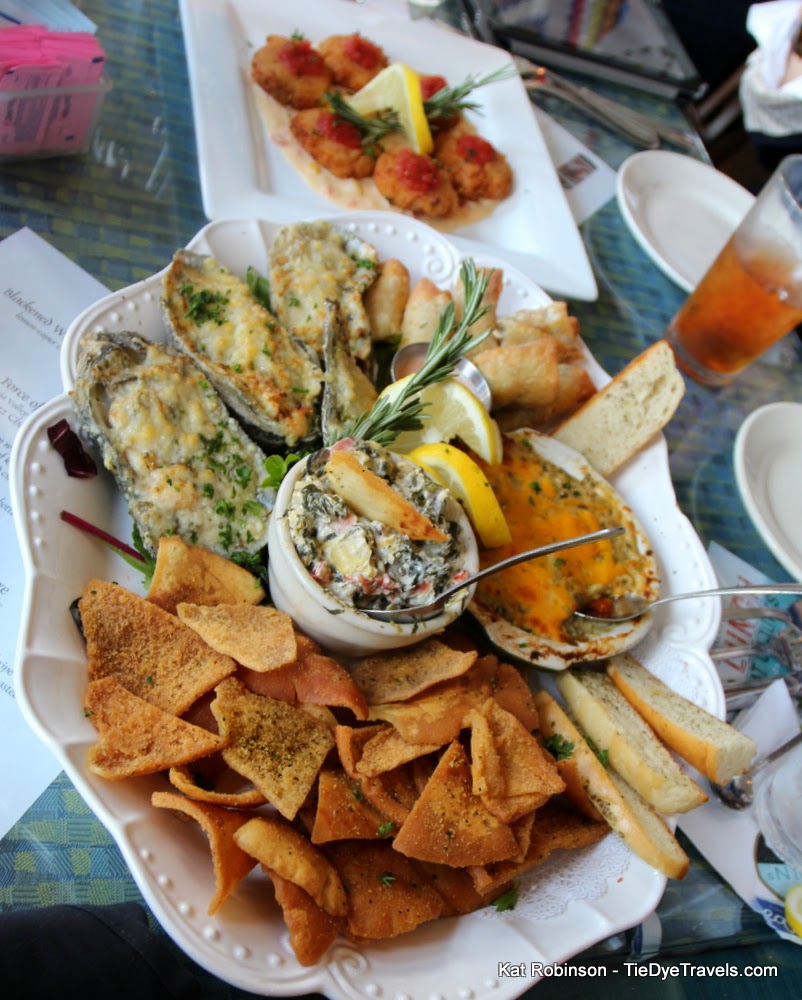 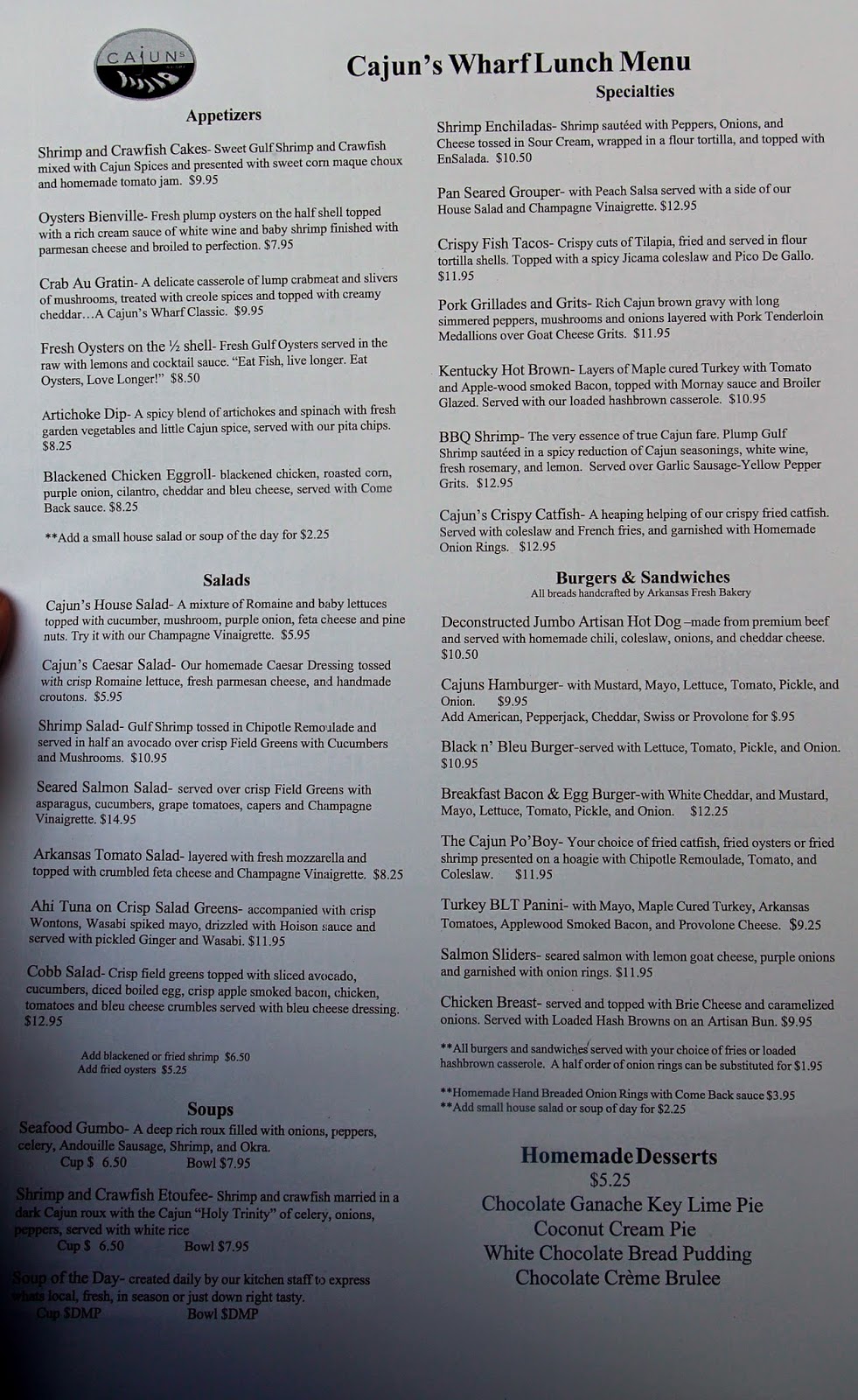