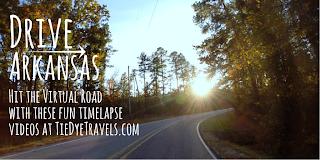 Technology sure has changed a lot since the early days of Tie Dye Travels seven years ago.  Back then, my camera only got about 100 shots on a card at 1200x800px, and that required two changes of (rechargeable) AA batteries. Video was right out.

Today I shoot on a Canon Rebel T4i, and have a companion photographer on a bigger, badder Canon 5D.  I can shoot interviews on my phone, and the still images on my outdated iPhone 4S are miles beyond that old Fuji point-and-shoot I started out with. 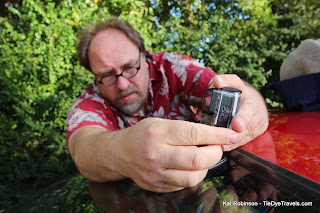 The latest tool added to the arsenal is a GoPro 3+ Black.  We actually purchased the unit this spring, but thanks to an incredibly demanding schedule, haven't had much of a chance to play with it.  Now that we're finally ahead of our work schedule, we're trying it out by capturing some of the cool routes we take to head to different places.

Here are three videos taken in timelapse at one frame per second. The first, Interstate 40 from just west of the I-430 exchange to near Ozark. We wanted to make sure the rig would work fine at high speeds. We pulled off briefly at Conway to check the camera after a rock popped the car.

The next test was set along Arkansas Highway 10 from Greenwood to Havana. We actually expected it to roll all the way to Perryville. I believe we lost the tail in a file divide.

The third test was one I've wanted to document for a while -- Arkansas Highway 9 between Mammoth Spring and Mountain View. Of course, we'd decide to do this on a day when I had a worsening earache and an air conditioner that couldn't make up its mind whether it would blow hot or cold. Grav got carsick. Hunter loved it -- the ride, not the carsickness.

After those experiments, we decided to try for two frames per second, and experimented around Little Rock. In advance of the 10th anniversary of the Clinton Presidential Library, I wanted to capture the River Market.

We had a little extra time and decided to do a big figure-8 through Hillcrest and the Heights.

And finally, just for giggles and grins, here's the shortest tour you'll ever take of Mount Holly Cemetery.

We're now considering where to go from here... are these interesting?  Let us know.
Told by Kat Robinson at 1:52:00 PM