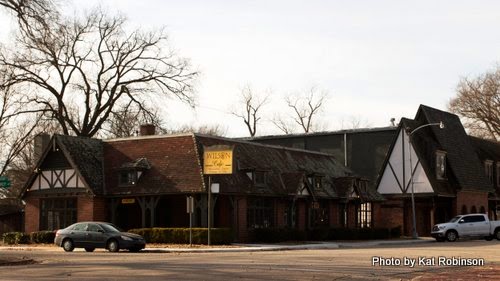 Locals will tell you that there's always been a tavern in the heart of Wilson, AR.  It's had many names and many proprietors, but the little dining spot right on the town square has been going on and off for more than 100 years.  The Wilson Cafe operating in that building today carries the tradition on -- and yes, it's STILL called The Tavern. 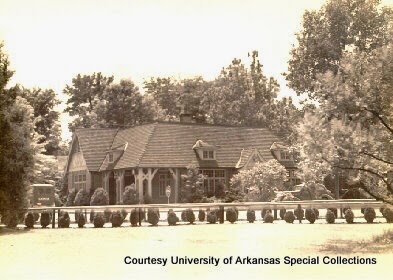 The little Mississippi River town along the Great River Road is named after R. E. Lee Wilson, a county resident who traded his late father's cleared farmland for timberland, then held onto the property and started what would eventually become a company town.  He built a sawmill, and by 1886 there was also a company store and residences.  I haven't been able to locate an exact date, but the Wilson Tavern was opened sometime around the turn of the century. 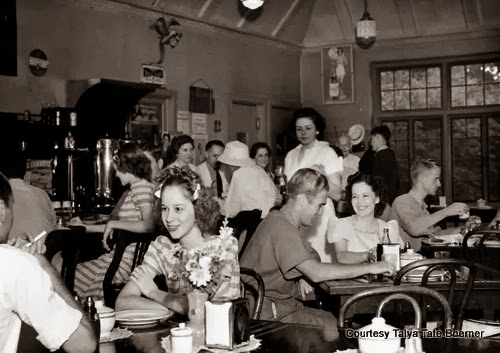 In 1925, R. E. Lee Wilson's similarly named son returned from his honeymoon to England with a vision of what the town of Wilson should look like.  The new buildings that went up during this time were of Tudor influence, and older buildings were retrofitted to match this new brown-and-cream wood-and-brick style.  Every building took on this veneer, including the local department store, post office, bank, gas station and grocery store.  Today, these buildings still stand.

And in what was once Wilson Tavern (and many other things), a restaurant now operates as the Wilson Cafe.  What's beyond the doors of this cottage is a surprisingly updated menu with a locavore commitment, thanks to Chef Joe Cartwright.  As always, locals pack the place out Tuesday through Saturday for lunch or brunch -- but now they're joined by others who come from Memphis, Jonesboro and even further away.  And dinner?

Well, I'll have to get back there for dinner. 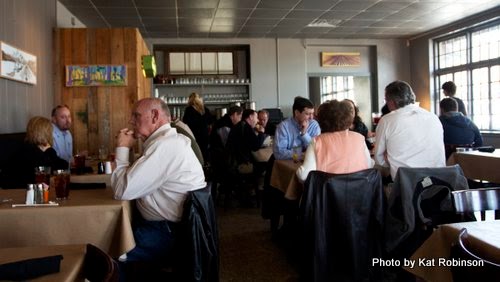 We stopped in on a Thursday afternoon to meet others and chat about the town.  The main room was packed and noisy... gray, sure, but so reminiscent of those earlier days.  I saw salads and sandwiches and lots of hot beverages (it was a very windy day, probably 40 degrees when we arrived).  Conversations abounded.

The main room is large, but there are also other rooms -- a private front room with a large table and chandelier and a lounge towards the back with its own entrance.  I would later learn that while the cafe currently does not sell alcohol, this area is set up to do just that. 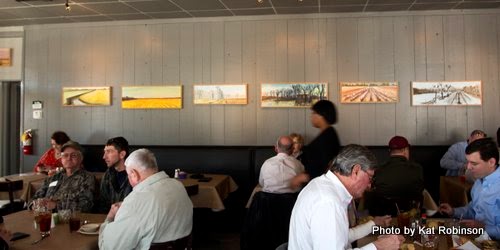 Along one wall, there was a full station of glassware.  Another -- a wait station and a line of paintings by local artist Norwood Creech.  Our waitress was already prepared with menus for us and brought to our table beverages -- including clear strong tea. 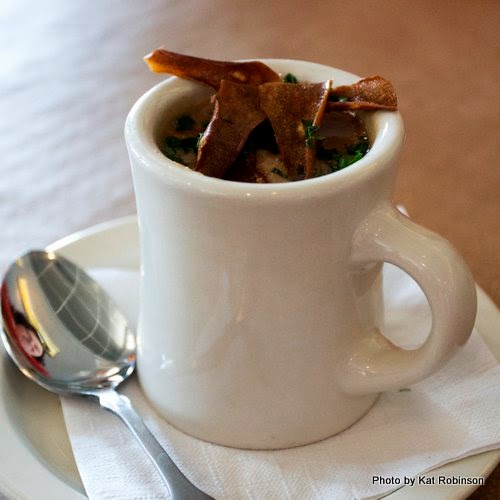 Chef Joe's specials for the day included a catfish po'boy, a smoked turkey and provolone sandwich, sweet potato pie and sweet potato soup -- the last of which one of my dining companions chose for a starter.  The mug-bourne concoction arrived at the table first, hot and fragrant and reminiscent of Sunday after Christmas, a steamy concoction of pureed sweet potato nurtured with nutmeg, cinnamon and other spices.  The slivers of sweet potato skin on top were just an indication of its contents -- but the scent told more of 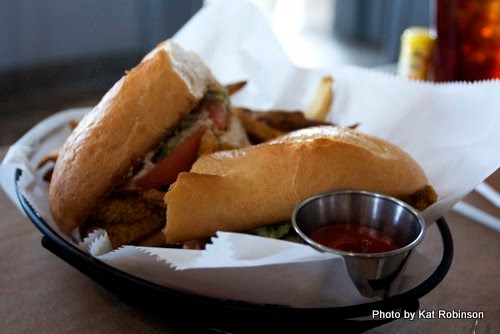 Our lunches arrived.  One of my companions had chosen the catfish po'boy and it arrived accompanied by parmesan fries.  The thick cornmeal-coated planks of catfish and chunky slices of tomato were pasted to their golden rolls gorgeously.

But honestly, I had far more interest in my meal, delivered all at once -- the Thursday special of pan seared Mississippi catfish, served alongside two sides -- my choices, roasted root vegetables and the Nice Little Salad.  The fragrance of delicately balanced spicing on the warm plate emanated quickly across the table, tantalizing.  I had to try this dish of fish before I tackled the cool salad to the side. 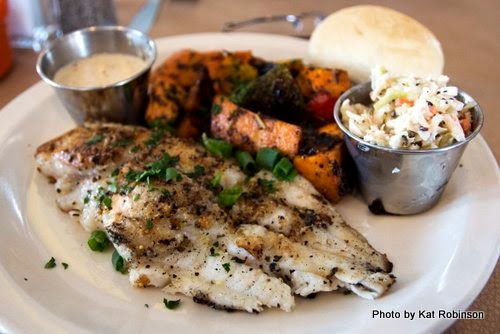 And this buttery, perfectly seared and seasoned fillet just may be the best catfish I have ever had in my life.  It was light but warming with a careful hand to the Creole spicing scattered on its top.  Even the non-catfish lover at my table declared it good... and that's saying something.

The roasted vegetables, rather than being the overused blend of squash and zucchini familiar to so many places, were a combination of roasted but still firm and slightly crusty sweet potatoes, carrots and squash (in this case, likely a butternut or acorn, I did not discern which), roasted together with red and green bell peppers and onions to a light char.  They were marvelous.

The plate was complete with ramekins of a textured remoulade high on garlic and a peppery -- and I do mean black peppery -- finely cut coleslaw.  There was also a white roll, sadly the only thing not exceptional here. 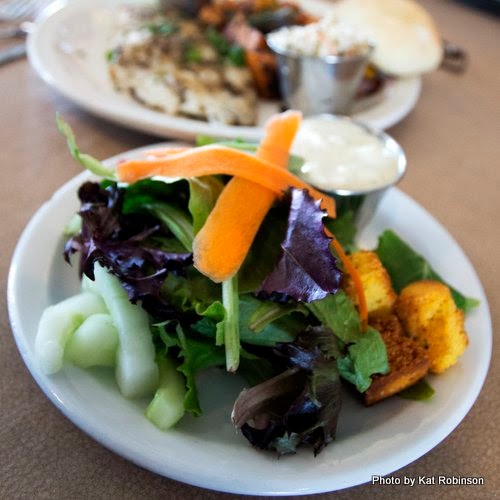 I even adored the Nice Little Salad -- field greens topped with long thin slices of carrot over cucumber with cornbread croutons and a very chunky bleu cheese dressing.  Yes, it is a nice salad.

Over our lunches, we talked with John Faulkner with the Lawrence Group, which hopes to revitalize and refocus Wilson.  I'm sure I'll have plenty to tell you about this in the future -- but of course, I'm just talking about the Wilson Cafe today.  He did share with us the story of how Chef Joe Cartwright, formerly of The Elegant Farmer in Memphis, came to the place.  Turns out, John would call about to different restaurants in Memphis looking for a suitable candidate willing to pull up roots and set up shop in a tiny burg... and Chef Mac Edwards answered the phone.  He suggested asking Cartwright, a young man who's spent a good portion of his life in the Arkansas Delta, as an option.  Cartwright agreed, moved to Wilson and on December 20th served up the first menu at his version of the Wilson Cafe. 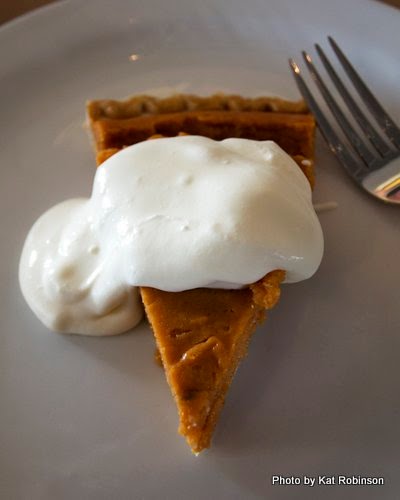 John insisted that we needed to try all of the desserts offered for the day, which we did, sharing three plates of amazing confection.  The sweet potato pie on the specials board was perfectly spiced -- indeed, at first I thought I had a pumpkin pie, until the last of the spice came to the palate.  The swab of hand-beaten slightly soured cream atop the delicacy was lovely.

It matched that real sweet cream dabbed over the chocolate chess pie... which, I must admit, is now amongst my favorite in the chess pie category. 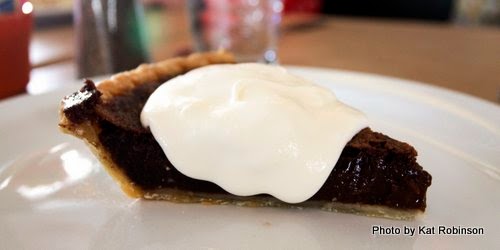 Its deep unabashedly dark flavor was solid and unyielding, the flavors of old fashioned cocoa and sugar and butter strong.  Its flavor reminded me of the French practice of pairing fresh baguette with bitter chocolate... and, if I had not been in polite company and busy flapping my gums about preservation and restoration, I would have inhaled it. 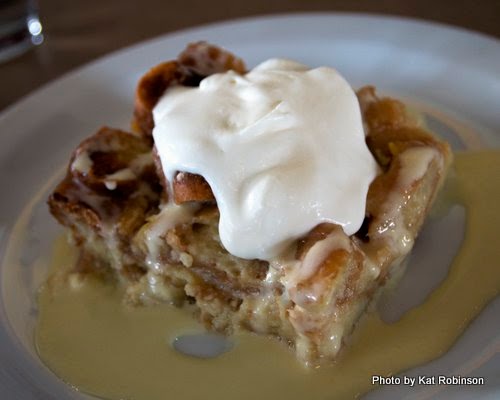 But the bigger hit with my dining companions was the doughnut bread pudding... exactly what it says on the tin, a bread pudding made from eggs, milk and torn pieces of doughnut, topped simply with real whipped cream and surrounded by a drizzle of creme anglaise.  Spiced simply with cinnamon, this deceptively modest offering was the star of the trio. 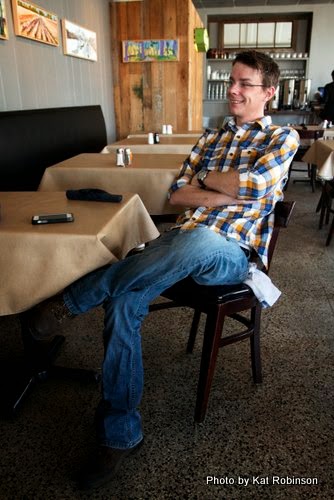 Chef joined us for a short bit, sharing about himself with that characteristic long ah lilt of a northeast Arkansas native, that same sort of four beat speak I grew accustomed to during my years in Jonesboro. The 32-year old Memphis-born culinarian was raised in West Memphis, and we share a couple of things -- he happened to attend school at Arkansas State in Jonesboro (I didn't attend ASU, but I lived there during my KAIT years), was a music ed major like me, and started his cooking career at my favorite restaurant in that town -- Lazzari Italian Oven.  He worked his way up through the Memphis food scene with stints at the Mesquite Chop House and Spindini... Wilson Cafe could be considered a bit of a stretch, or a bit of a challenge.  Joe seems to be the sort of guy who enjoys a good challenge. 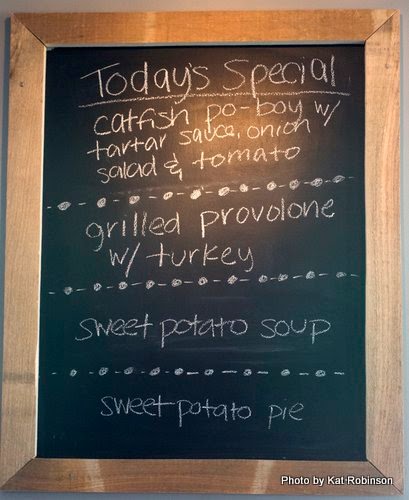 We had other stops to make that day, and couldn't stay longer... but I will be back.  There are stories to be told about Wilson, sure -- and about the Dyess colony just 12 miles away -- and the boyhood home of Johnny Cash.  Those stories will come later.  For now, I'd suggest you consider stopping by the little Tudor cottage on Highway 61.  It's off the interstate in a town of less than a thousand people... but you'll find a good meal there any Tuesday through Sunday lunch or Thursday through Saturday dinner.  Oh, and Thursday there's live music, too.  Check out the Facebook page or call (870) 655-0222.

And for more on the Wilson redevelopment, check out this New York Times article by Kim Severson.
To purchase this article, email Kat Robinson at 2/01/2014 10:00:00 PM