The Fallow Field: Johnny Cash's Boyhood Home Sits Empty, But Not For Long. 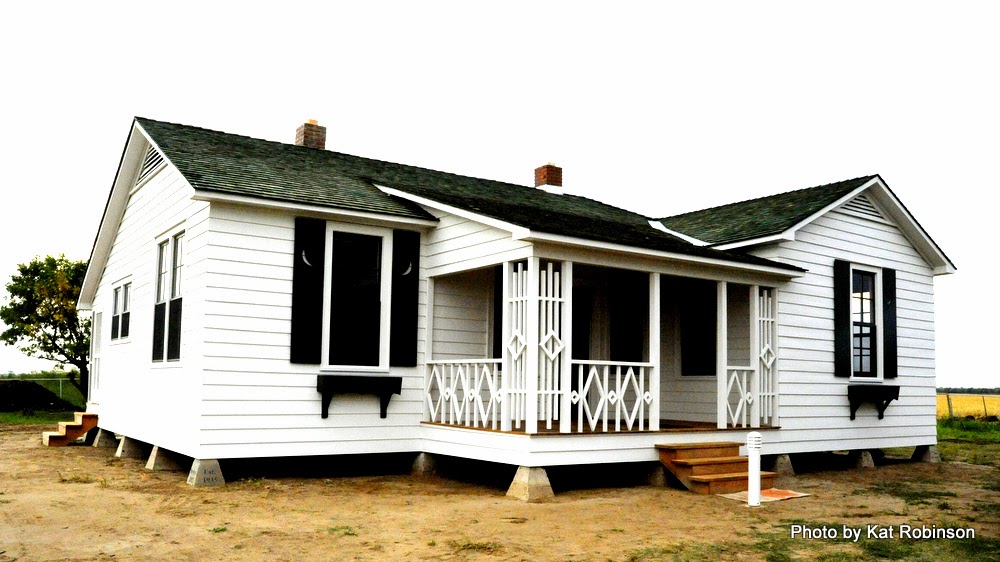 The Arkansas Delta may be home to the longest, prettiest sunsets I have ever seen. Miles of flatland along the Mississippi River alluvial plain give way only to the seam of distant treelines, straight up into the sky. 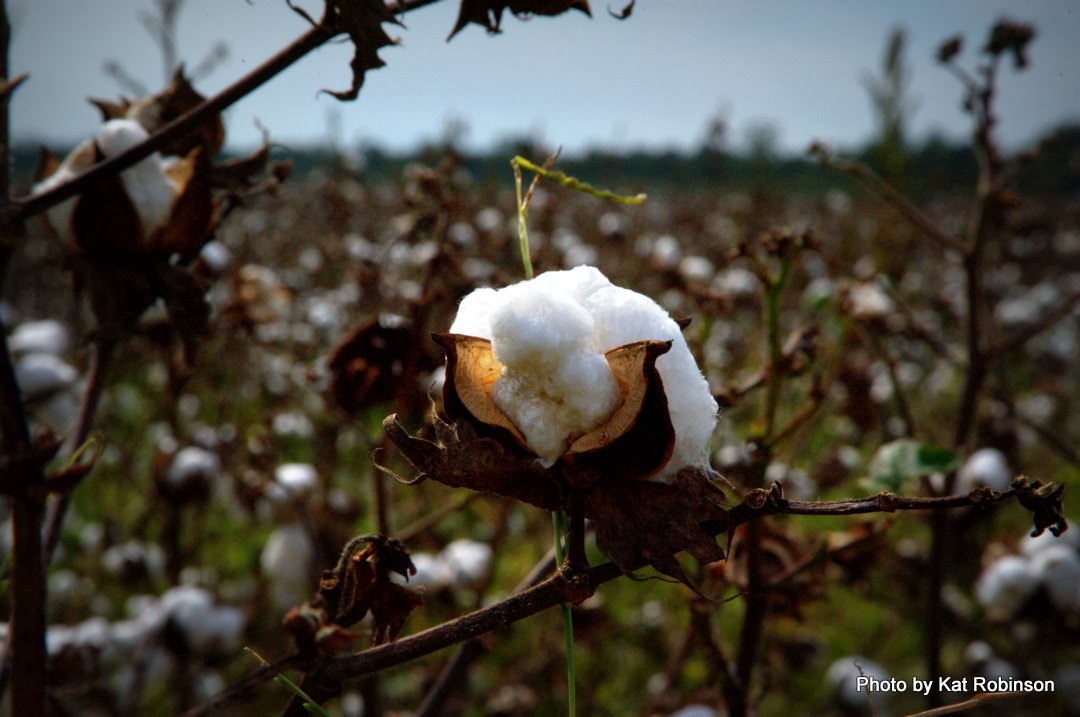 But unlike my ancestral homeroots in southwest Arkansas, the roads here are straight and the topsoil lies 200 feet deep, a slurry of mud hardened only by drought or cold or decades of passing tires, double-rutted dirt roads a slash across thousands of acres of fields…
white rows of cotton tops in summer, neon slices of green when the winter wheat starts to poke up its head. And when the fields are fallow, a textured turn-up of mud or the black of new ash from burn-offs patch their way together all the way to the horizon. 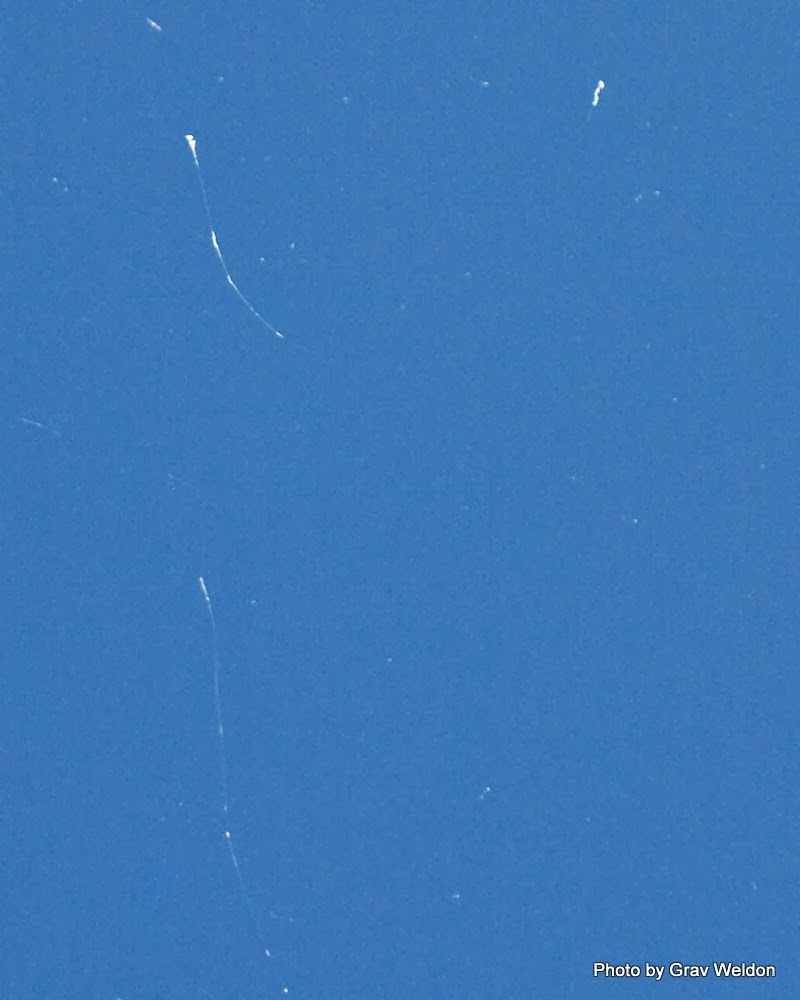 And the wind… it never stops. Sometimes it blows distant treetops along the St. Francis River, the silent undulation barely visible in the distance. Sometimes it kicks up dust and sediment and sends it scurrying along the roadside. In November, the cotton wind blows, 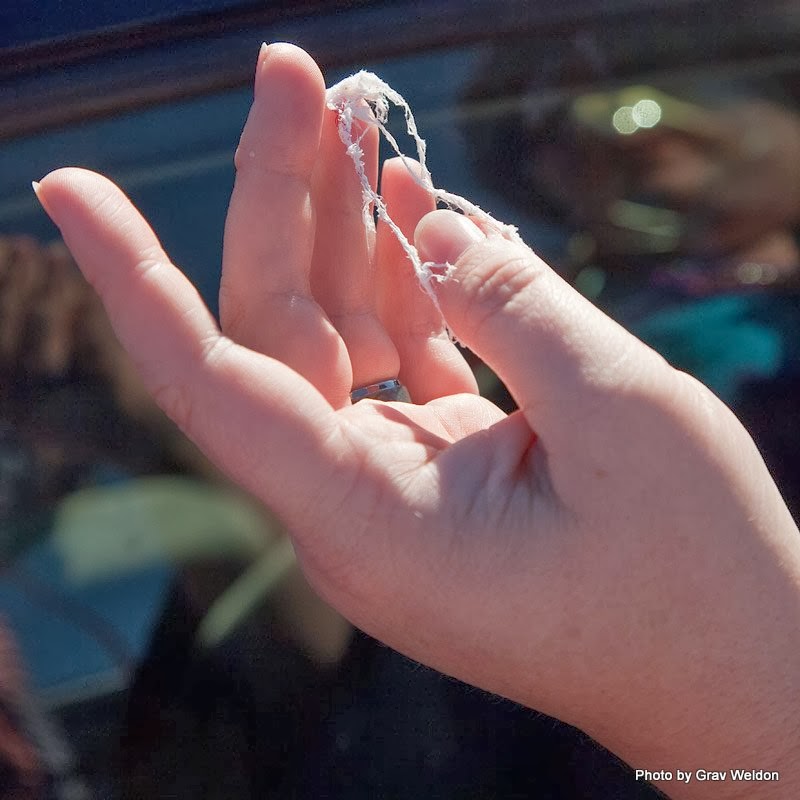 ethereal spiderwebs grown rather than spun, released from bolls and gravity to hover. In July, it feels as if the devil himself is panting from the long run across the county. And when the wind turns, you can sometimes hear the echo of distant Interstate 55… or the howl of a wrong-way storm. 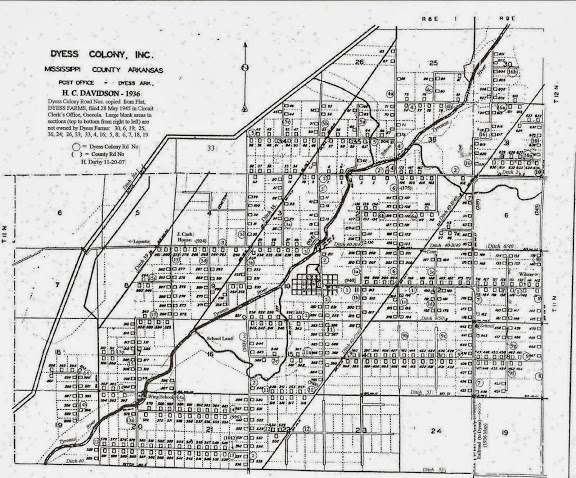 That wind shakes shutters and huffs away at the chinks of every home. And into this wind young JR Cash was brought at the age of three, with his brothers and sisters by parents taking advantage of the Dyess Colony deal… 20 or 40 acres of land, a five room house, a barn, an outhouse and a chicken coop back in 1936. That deal, open to families with a farming background from the state’s relief rolls selected through an application process that included six pages of paperwork, was a ray of hope for those who’d tried to keep going through flood, drought and the Great Depression and a godsend to Ray Cash, whose farm at Kingsland had all but completely failed.

Though the wind was unforgiving, the land itself was pure gold, rich and fertile. And despite the floods and the droughts, it was enough to scrape out a life.

Today, if you head east from Lepanto on Highway 14 and you glance out to the right, you might catch sight of a white house with a green roof. When the fields are fallow and the sky is clear, you can see it three miles out. A right-hand turn to the south on Highway 77 will bring you to a junction with a little gravel road… and the little house is the only one in view. 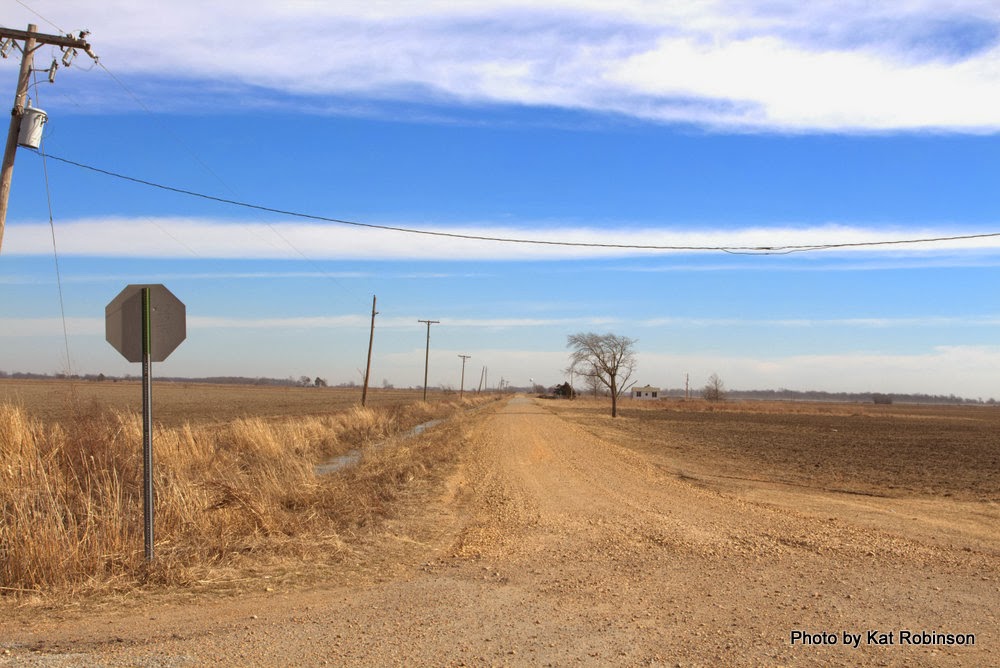 This gravel road has seen thousands over its lifetime – first farmers in their trucks and then their children, running barefoot on the hard-pack and small rocks covering the gumbo soil below. They call it gumbo soil because it is a mixture of many things – but it is soft, too, so soft that houses not placed on a slab of concrete tend to twist and sink over time. 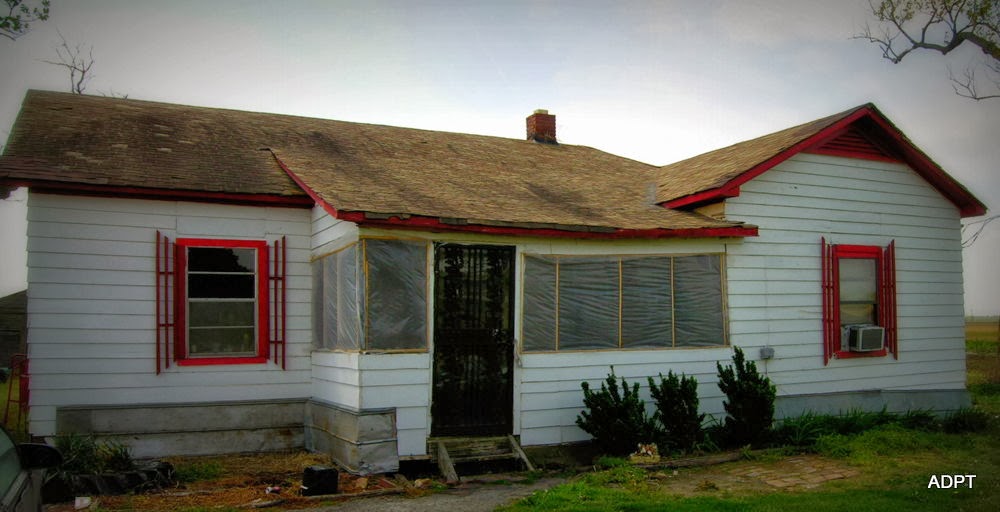 That’s what happened to the house that once stood on blocks here… painted over time, sure, but its spine was broken and it leaned out a little too far here and there. Not even five years ago this is what the house looked like, aching and pitiful.

But not any more.

That’s not to say you can’t make the pilgrimage now. In fact, many do – especially music lovers or anyone with a great amount of interest traveling in the Lepanto or Wilson area.

A-State acquired the properties for its Arkansas Heritage Sites program, and through funds raised by the Johnny Cash Music Festivals and with the help of Tommy and Joanne Cash (Johnny’s brother and sister) added to the hard work of Dr. Ruth Hawkins and her staff, the home has been restored to its original glory.

A few months ago, I was one of a few offered the chance to visit the home. What I saw surprised me. 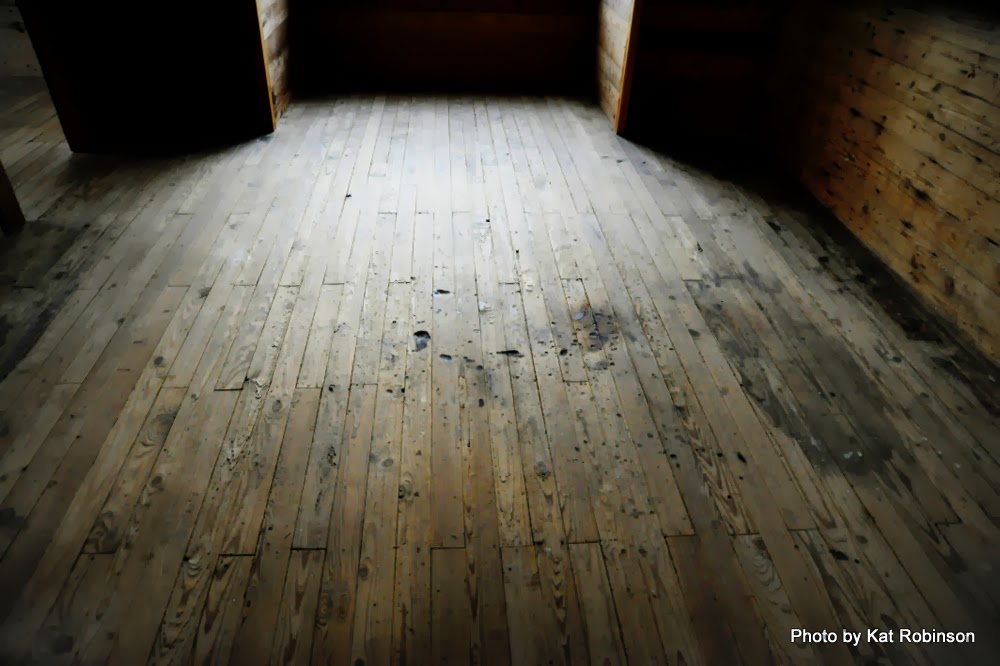 The first thing was the wood clad walls. When you walk through the front door, that’s what greets you – wood walls, floor and ceiling with nary a cover. This was the main room of the house. There’s now an original linoleum piece on the floor but on this visit it was barren.

Dr. Hawkins explained that there had been a lot of work to do here… including replacing rotten boards with similar pieces of wood that would age properly with the rest… and moving the door frame back to its original location while salvaging the wood to patch everything back to where it needed to be. 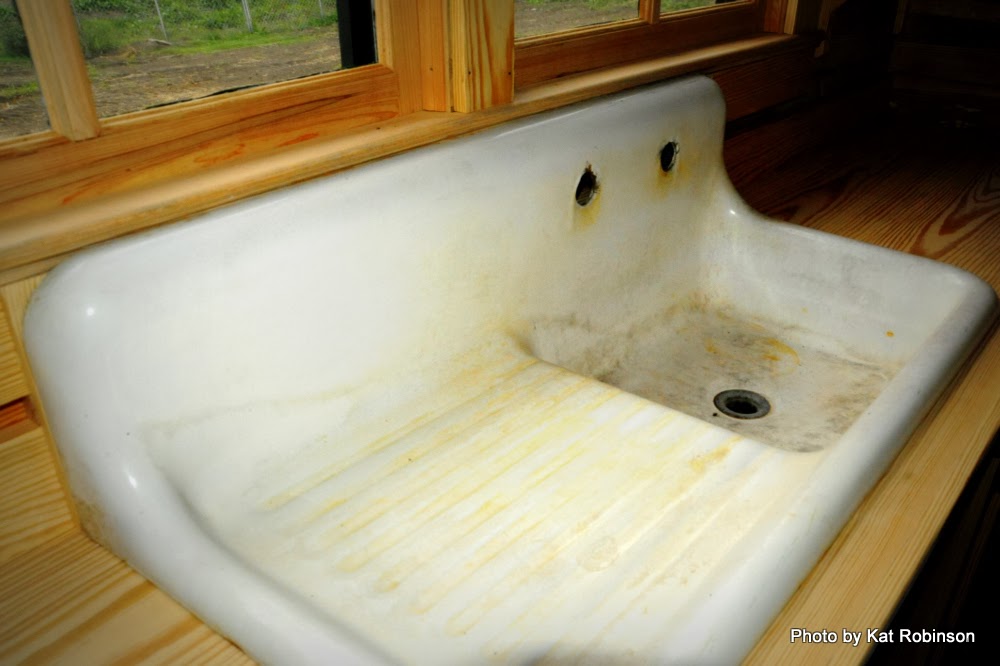 To the left, that doorway takes you through to the old dining space and kitchen… complete with a sink recently scavenged to place here. It sits before a window that looked out on fields of cotton.

This time of year, the fields lay fallow, with the colder than normal winter and its winds huffing the loose dust into the wind to create a motion of brown swirls visible from that kitchen perch.

To the right of the living area lay a small hall and three rooms – one intended to be a bathroom (though it was not plumbed out while the Cashes lived there, it was where a tub was kept to fill with water for bathing) and two bedrooms. The back bedroom was where Ray and Carrie slept in one bed, with one of their daughters in the other.

And in the front of the house was the bedroom shared by the other siblings – two girls to the left, and two boys to the right. One of those boys was Johnny Cash.

As I mentioned, the family came to Dyess Colony in March 1936. Wind brought the heat and it brought the cold… in fact, in April 1936 a record monthly low was set of just 23 degrees one night. And the next year, floods would inundate the colony, a story Cash will tell you about himself in this clip from 1958.

The family may have made for high land and spent time waiting for the waters to recede hours away in Pine Bluff, but they did come back – indeed, JR Cash lived in the house at Dyess from the time he was three until he was 18 and headed for the Air Force. The military wouldn’t take him without having what they considered to be a “real name,” and though JR had been named such by his daddy, he took the name “John R. Cash” that day in 1950. Five years later when he signed with Sun Records in Memphis, he signed on as the man we know today… who would become the Man in Black… Johnny Cash. 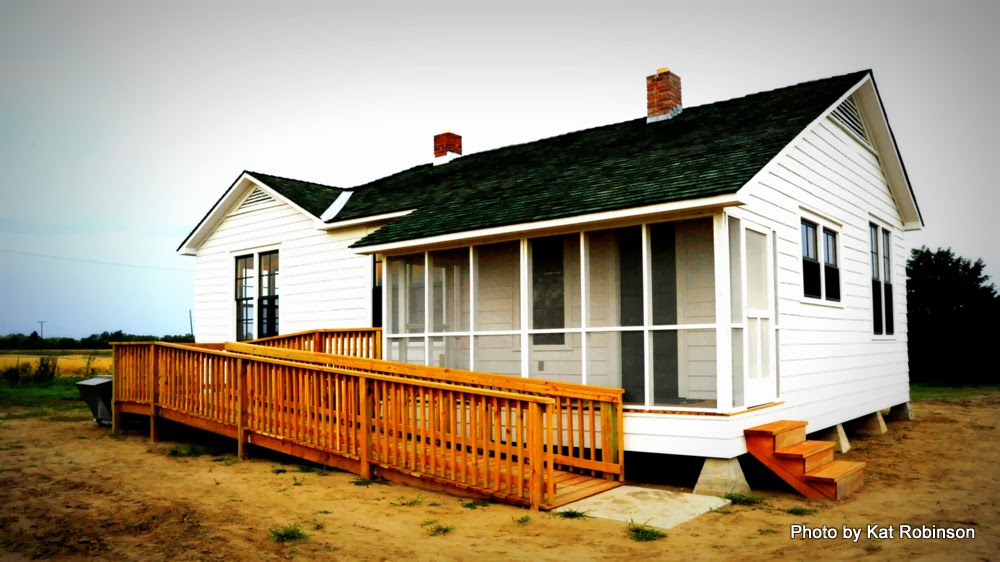 The wheat, the oats, the little garden in the back… when you’re just listening to the music, the ideas tack together in your mind. But here, out on the plain between Lepanto on the St. Francis River Bayou on the
one side and Dyess proper a few miles to the other, standing on the back porch, you can almost see the rows formed out in front of you… you can almost hear the crackle of the radio in that wind, the radio that brought Big Bill Broonzy, Robert Johnson and Louis Jordan across miles to be heard on a porch in the Arkansas Delta… that would inspire a young boy.

There was other music here – Carrie Cash’s piano and the voices of family members raised in praise and harmony over the years. That piano will come back to the home soon – the mayor of Dyess, Larry Sims, located and preserved the upright. 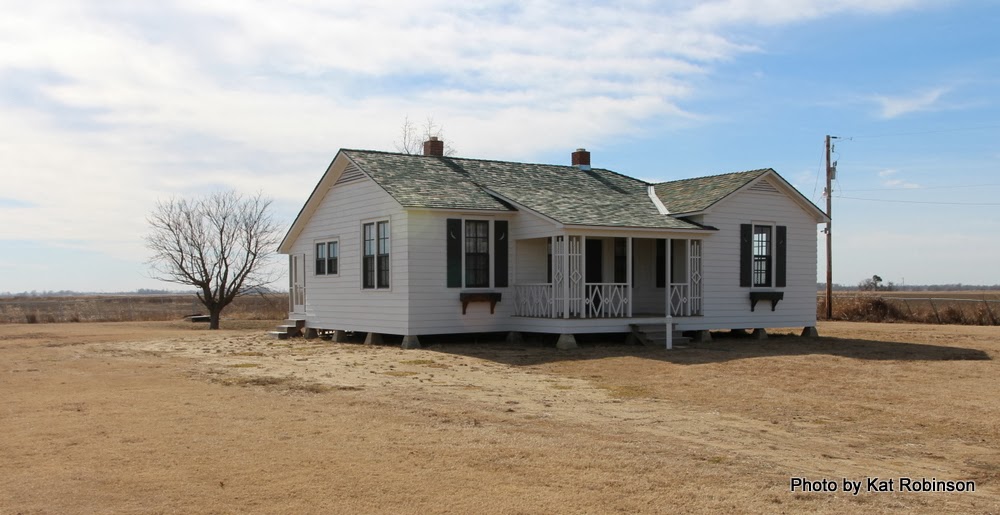 The house as it stands today is strong, its spine restored, its walls refreshed and its contents collected. It won’t fall again. Part of the process of restoring the house included its relocation off its original foundation, the excavation of several feet of soil under where it had sat, the pouring of a deep thick slab of concrete and the covering of such with a thin layer of gumbo soil. 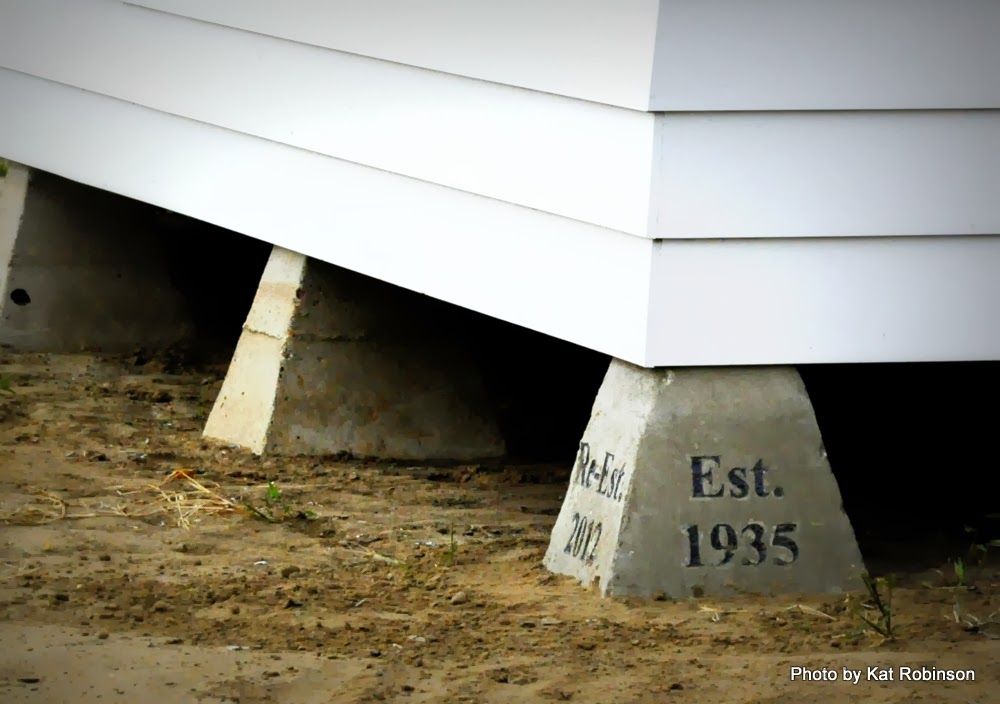 Today the house looks as if it was never moved – except for a lone cornerstone declaring both the date of its original construction and its revitalization.

There is far more to be done to the boyhood home of Johnny Cash. The efforts to complete the restoration and to collect the items that will be displayed within continues. In Dyess itself,

the administration building is under its own renovation progress, and the bandshell next door is being stabilized.
You can still see the foundation of a stage to the big building’s other side, next to the city hall. 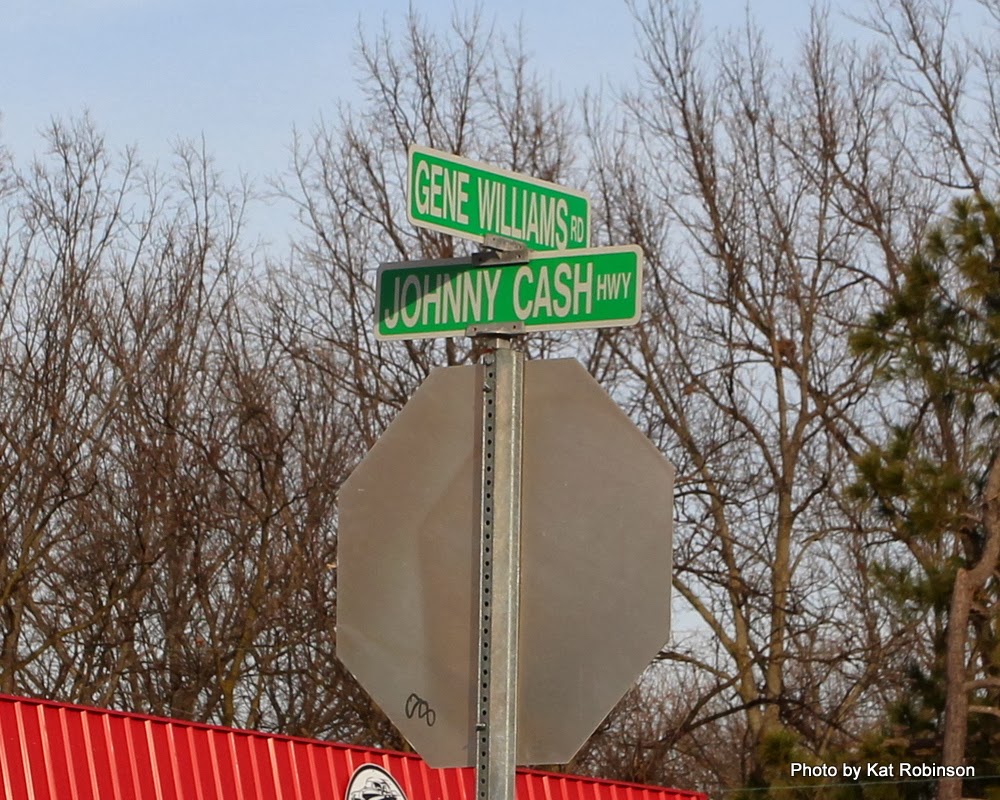 And across the street, you’ll find yourself at the corner of Johnny Cash and Gene Williams, one of the town’s other native sons.

A few months from now, the doors will open to the Johnny Cash Boyhood Home, and a grand celebration will be held during the Johnny Cash Music Festival weekend events August 16th. Thousands are expected to make the pilgrimage at that time. 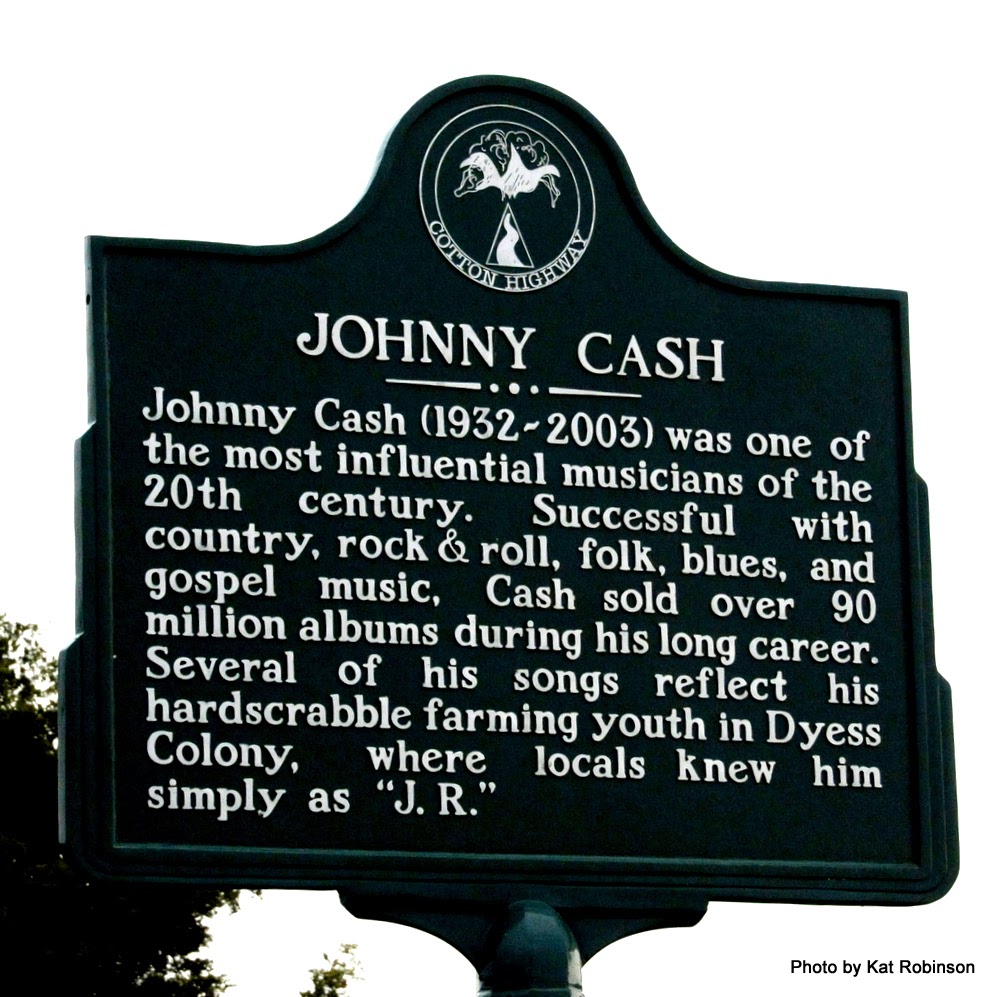 But right now, you can travel the distance yourself. If it’s a sunny day, it might be a long stop to stretch your legs, read the sign and gaze at the home behind its protective fence. But if the wind blows hard, listen for the song it carries as it bears upon its back time and blues and maybe even a hint of the cotton wind.

For more information about the Johnny Cash Boyhood Home, head to this ever-evolving website created and maintained by Arkansas State University. You’ll also find a touching tribute to Cash and memories shared by his daughter Rosanne Cash by the remarkable folks at CBS Sunday Morning, and a story on the restoration efforts by Little Rock CBS affiliate THV 11. And for more information on the Dyess Colony, check out this entry from the Encyclopedia of Arkansas. 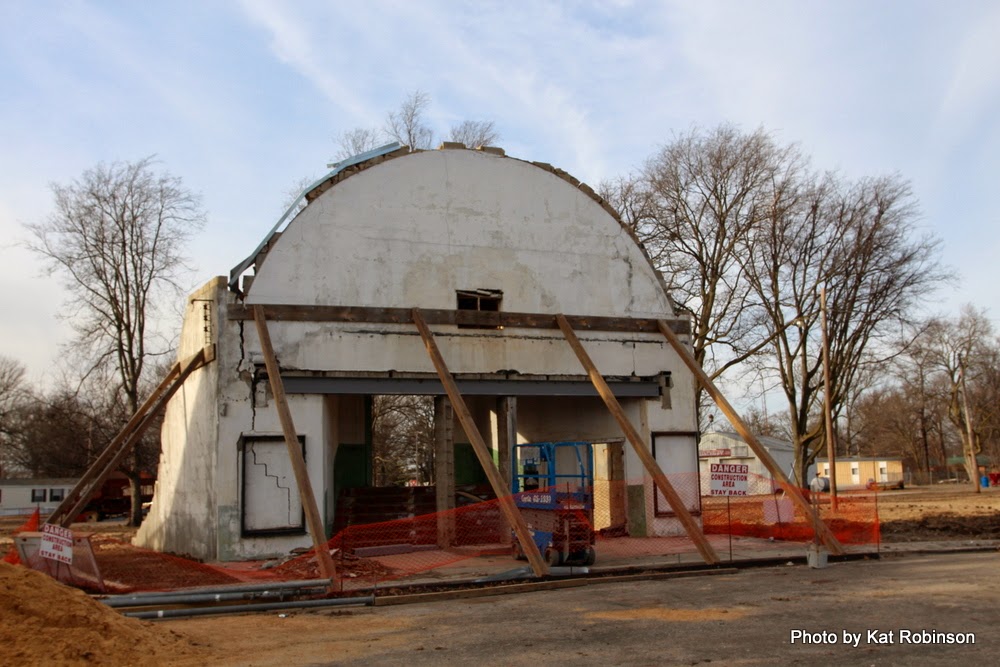 In the center of the semi-circle drive in front of the administration building, you'll see this plaque for a flagpole placed in honor of the 200th birthday of the United States, placed in 1976. 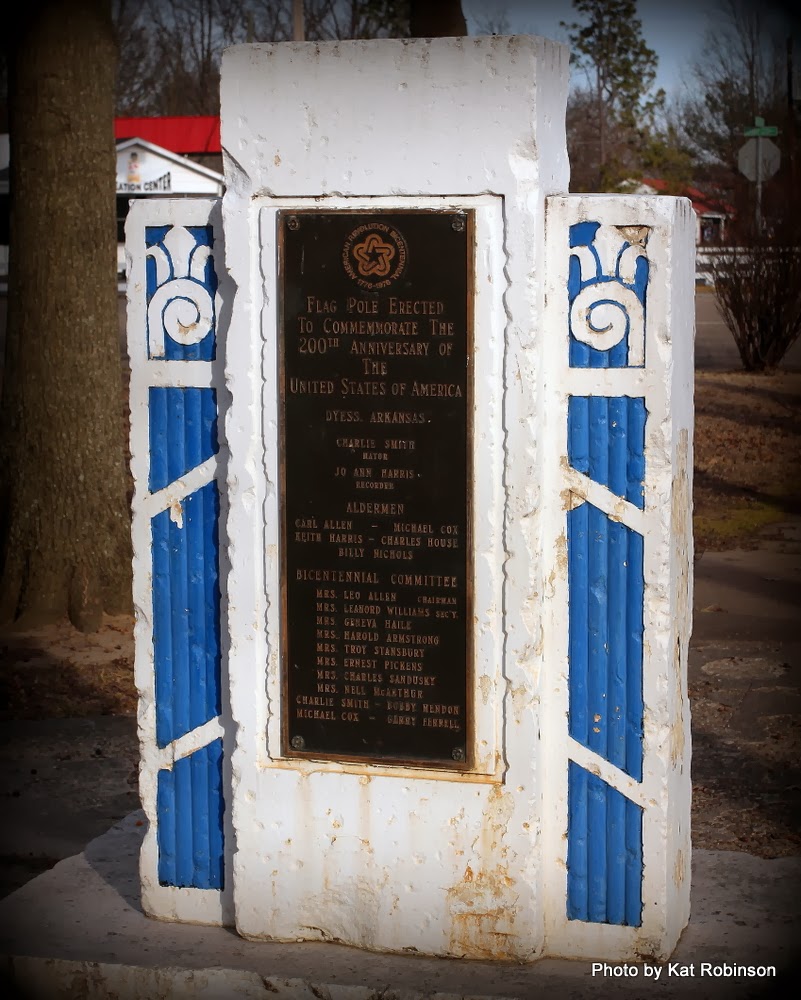 And here's that flagpole. 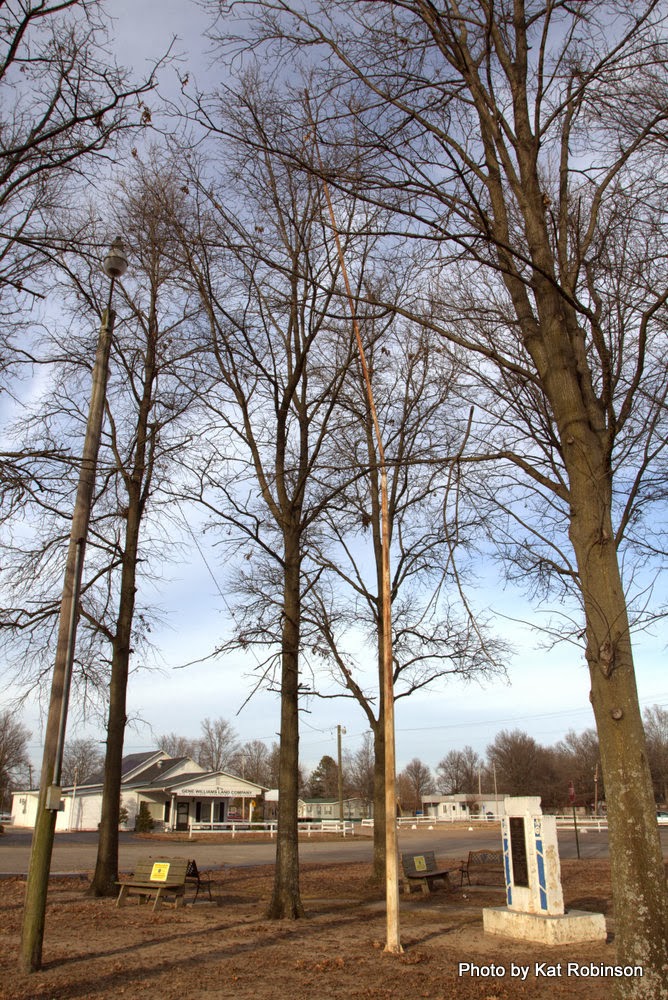 There's also a souvenir stand between Dyess and the Johnny Cash Boyhood Home on Highway 14.

And northeast of the administration building, you can still visit the arch from the high school JR Cash attended. 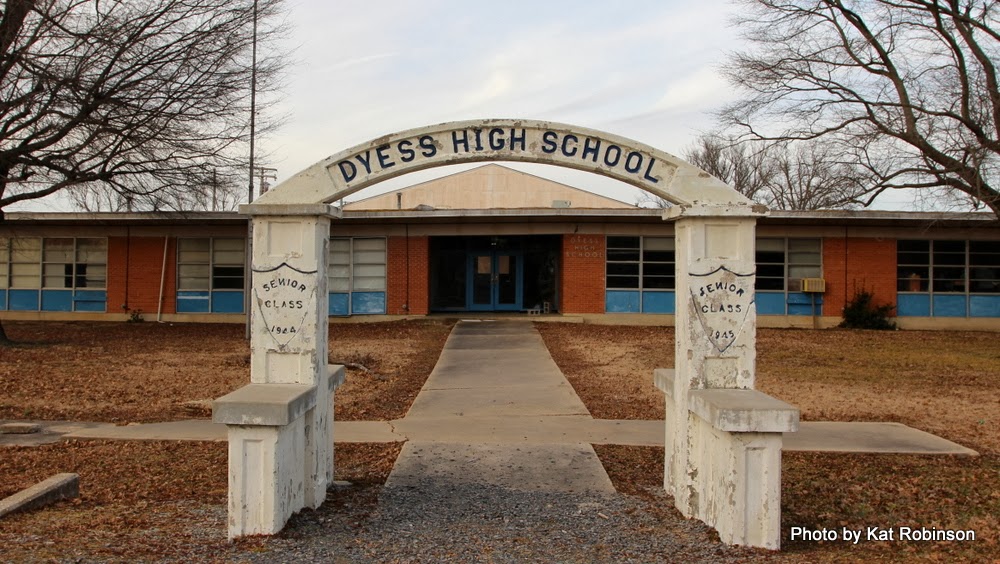