Peas are in! First PurpleHull Peas of the Season Harvested Near Emerson. 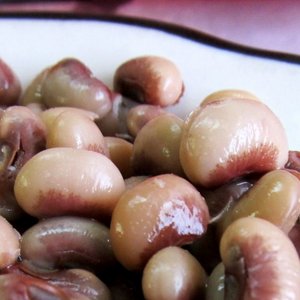 The Arkansas standard for crowder peas, the majestic PurpleHull Pea, is a celebrated plant in my family. Seasons can be marked by them. The beginning of true summer, that is to say mid-June, is met with the first harvest of peas on the plate, usually boiled up with a bit of animal fat and served with fresh onion slices. New Year’s is celebrated with them (rather than the Yankee tradition of blackeyed peas), and the remainder of the saved-back crop gets used up usually before Lent begins. For me, May is pea-free, unless I am fortunate enough to come across them in one of my favorite home cookin’ restaurants.

This year will be different. I just heard from Bill Daily, the PurpleHull pea guy. Bill’s big schtick is promoting the heck out of the Emerson PurpleHull Pea Festival, which is held the last weekend of June. I opened my messages this morning to see the smiling face of one Jerry Freppon... proudly holding a mess of prepared peas... fresh peas. Oh my.

“Jerry Freppon of Emerson and his wife Jane enjoyed a meal of fresh purple hull peas Memorial Day evening. That’s because, to be best of anyone’s knowledge, he once again produced the season’s first ‘mess’ of Emerson Purple Hull Peas.”

Now, Jerry’s done this before in a way... he plants early, watches the crop closely and can usually be counted upon to be the first farmer in the area to harvest peas from the vine. Last year he pulled in that first crop on June 4th. This year, though -- May 28th. 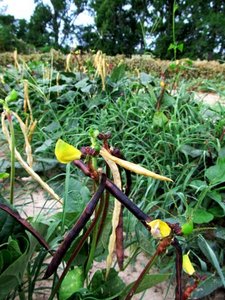 PurpleHull peas in May? That’s unheard of. I mean, my south Arkansas relations usually start shelling (not shucking, shelling -- there’s an important distinction there) around mid-June. But to proudly bear a purple-tinted thumb in May? Inconceivable?

“It’s pretty remarkable,” Bill says. “We often have trouble getting enough peas ripe in time for the festival, and here he is with ripe peas a full month before the festival.”

Freppon says his motivation to raise the first peas is simple. “Nothing tastes better than a plate of good ole fresh purple hull peas.” He planted this batch on March 14th, in the middle of those strange near-90 temperatures we experienced at the tail-end of winter. He also plastic-sheeted his peas at the start of germination to protect them from birds and to keep the ground warm. Bill says peas don’t do well unless the ground is at least 60 degrees. 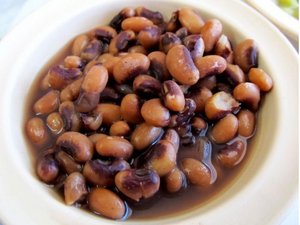 I am tempted to head south and see who else has themselves some peas ready to go. I still have a couple of Burge’s smoked turkey thigh bones and some homemade stock and I sure wouldn’t mind putting them to use bubbling about in a simmering pot of peas. That’d about make me plum happy today.

It’ll be interesting to see when the grand old PurpleHull pea makes it to our local farmers markets. I’m also curious to see if they beat the blackberries. I’ve already sighted some Johnson County and Pope County peaches, and they have been on the juicy side, much like the already-gone strawberries we got in early this year.