Osage Clayworks: The Potter in the Old General Store. 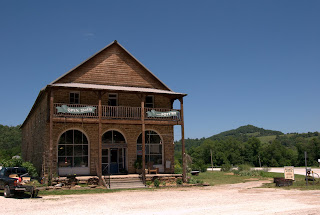 Just off U.S. 412 between Alpena and Huntsville, you’ll see an old building standing to the south. The old Stamps General Store has been located there since 1901, but the business closed down decades ago. Still, the store is busy today as home of the Osage Clayworks, a thriving pottery business.

When you first drive up, you may see a dog or cat on the porch. There’s a sign on the door letting you know it’s okay to let them in. The place has its own cats and a friendly dog, too. Newt Lale will be the first to tell you that the cats won’t knock anything over. They’ve grown up between the stoneware mugs and plates on the shelves. They grace the building like ghosts in an old house.

I dropped by a few weeks ago to learn more about the place. I made my first visit back in December, when I was searching out Arkansas-made products for my friends for Christmas. Several of the folks in my circle received hand-cast sponge dishes that had been molded on leaves found around the property.

Though it was early in the afternoon, there wasn't a soul outside enjoying the pretty April day. When I walked up the steps I saw the sign that said "It's OK to let the dog in." This time around, there was no dog (there had been in December) but there was amongst the dishes in the window a longhaired cat, enjoying the sunlight.

I browsed quietly after greeting Newt. He left me to my own devices, which was peering at and taking photos of all these clay creations. He's told me before, and he told me again -- everything in that store is original. See, when he was looking at the property, he saw it was full of old stuff. Many of the items the general store sold still sat on the counters, and the cabinets and furniture hadn’t been moved since the last day of operation. Turns out, the family was willing to leave every antique, every oddity and cereal box and glass-front curio – as long as they were left there like a living museum. Newt agreed, and moved his potter’s wheel in. That’s been decades ago, and today every countertop and every shelf is covered with objects wheelspun and fired and glazed right in the old building.

Those cats? They’re experts at dusting. And there’s lots to dust – from gigantic tureens with lids and handles to tiny pinch-pots and rag holders. There are mugs of all shapes and sizes, plates and bowls and spoon rests and saucers. There are art objects and vases and lambs and just about anything you can imagine made out of clay.

I'd made it around to the other side of the store and was still trying to decide on a gift for a dear friend of mine. Meanwhile, the fluffy cat from the window had carefully made his way across the floor, silently stalking about before taking two leaps and landing atop an old glass case on the main counter. He stretched and spread out, king of his jurisdiction.

A couple had come in by this point, and Newt had started up a conversation, sharing the story once again about the store and its contents. The folks, who were from out of state, showed great interest, especially when Newt sat down at the wheel to throw a pot. It doesn’t take him long to make a pot, that's for sure. He’s been at the wheelthrowing for nearly 30 years. It's fun to watch. He'll sit down right at the wheel in the middle of the store and thump a lump of red clay onto the turntable in front of him. Then away the wheel goes, and he smacks the clay with water and works it up with his hands, first forming a depression in the center and then shaping the outsides with his palms. As he presses, the clay rises up above his fingers, and he expertly turns it down again. Within a minute a pot is formed, and he stops the wheel, cuts it from its base with a piece of wire and sets it to drying. These pots will cure for a while until he has enough to run the kiln. They’ll then receive a glaze and go back in the kiln. The final product is hardy, dishwasher and microwave safe and surprisingly hard to break. 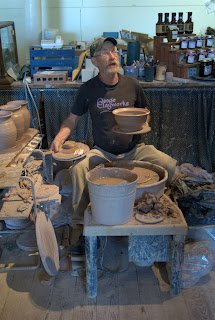 He made a joke with the tourists about how people will ask him how much he charges -- and when he says that pot will sell for $35, they'll poke their mates and say something along the lines of "hey, he makes $35 a minute." Which of course Newt responds to with a mention that yeah, that's all it takes to throw them, but they require a lot more work... and then there's the selling.

The old general store is the perfect place to display his pottery. The unique mugs fit separately each in its own cubby that used to be the postal boxes that served the town. Every surface is utilized for something. And where there aren't pots and plates, there are items from the old general store, cereal boxes and implements of whatnot and an air of being placed out of time.

After making my selection, Newt expertly wrapped the piece in a slice of local newspaper, dropped in a postcard and took my money. When I went out, I let in a shorthaired cat that seemed to know where he was going.