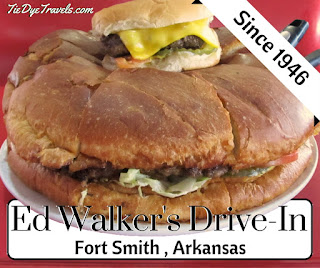 There are a lot of places around the state that proclaim the largest this-or-that. When it comes to single-patty burgers, you won’t find one larger than the Giant Hamburger at Ed Walker’s Drive-In in Fort Smith.


Ed Walker’s is known for a lot of reasons. It’s the only place in Arkansas where you can drive up and have an ice cold beer delivered to your car, for one -- thanks to the double threat of being grandfathered in for an old rule and being in a border city.

For service, you just pull up and flash your lights when you’re ready to order. The restaurant is also home of the Ed Walker’s French Dip Sandwich -- a nice, tender mess of fall-apart good roast beef on a tight French roll that’s served with a savory jus for dipping. 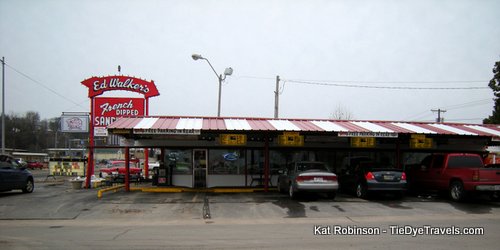 The restaurant started out in 1943 as a little place to catch one of those great French dips. There are some who claim moonshine also came out of this location, but lips are sealed with a wink on that account. In the 50s the restaurant was expanded, and Ed Walker himself had a bedroom on the back side of the place... right where the center dining room is today. 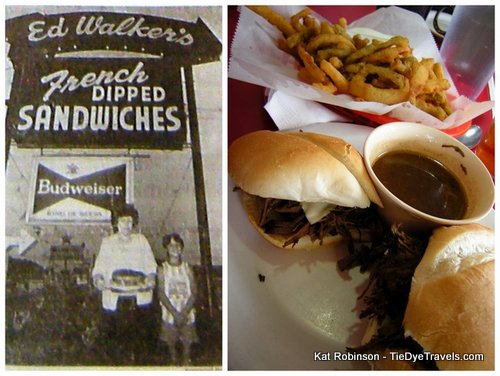 At 69 years old, Ed Walker’s is one of Arkansas’s oldest restaurants; it’s one of the few that still sits in its original location. The restaurant has been expanded several times and now even has a small in-house bakery in the back that supplies bread and buns to the restaurant and to the recently purchased sister restaurant down the street, Miss Anna’s on Towson. In fact, the famed pies from Miss Anna’s (formerly Goodson’s on Towson) are now sold at Ed Walker’s.

I’ve enjoyed the French dip sandwich before. I’ve also tried this massive burger on numerous occasions, starting with my first encounter in December 2007. It’s not a small burger by any means, and in my personal opinion it’s meant for sharing. 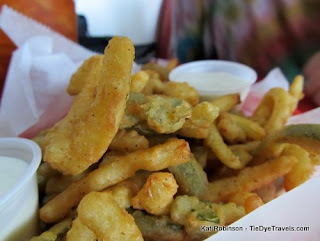 My dining companions and I placed our order by phone in advance -- and for good reason. A mammoth single patty burger containing five pounds of meat takes a while to cook through -- and the whole shebang can be 30 minutes from when you order it to when it comes to the table. We arrived 20 minutes after we ordered, so we asked for some Texas toothpicks (battered and fried jalapeno and onion strips) and nibbled on them with some Ranch dressing. We also had second thoughts and ordered a simple regular ⅓ pound cheeseburger and fries to have a means of comparison. 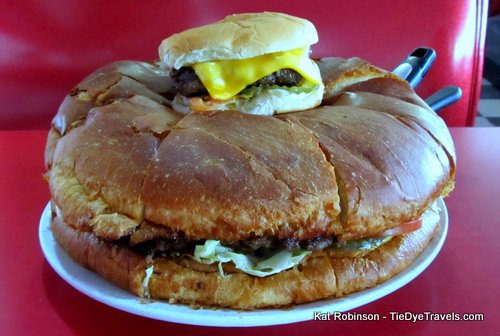 And then out came the burger. Now, it’s a little different from what I had experienced before, in that it had a different sort of bun. Used to be, those buns were made by Craig Family Bakery in Van Buren; these days, Ed Walker’s bakes its own sourdough type buns. This time we’d had all the toppings put on the burger (the default is to order them on the side so different members of the party can add what they want). The massive burger had been sliced into eight pieces and was served up with a pie server.

To give you an idea of the burger’s size, you have to see it with the smaller burger. This is the regular ⅓ pound burger perched atop the larger, Giant Cheeseburger we had ordered. More scope? Each of the eight slices contained roughly 10 ounces of meat -- that’s nearly 2/3rds of a pound! 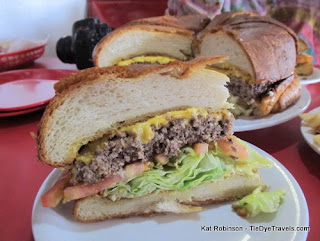 But the bigger question is -- how did it taste? Well, that's the thing. This burger isn't just big, it's tasty. The meat on both burgers was nicely salt and peppered with a little onion powder flavor. But the thicker patty managed to come out far more juicy. That's not the only difference. While the regular 1/3 pound burger had the right amount of drive-in smash-patty flavor with crispy edges to the meat and a nice melt from the cheese, it was on a typical bun and served with typical toppings (the default is mayo and mustard, both). The larger burger's more ovoid construction (face it, you cannot really adequately smash five pounds of meat and still have it fit on a 12" bun -- that much meat would be the size of a tabletop), paired with a texturally complex yeast pulled and airy bun and a generous application of American cheese... the bigger burger is better. 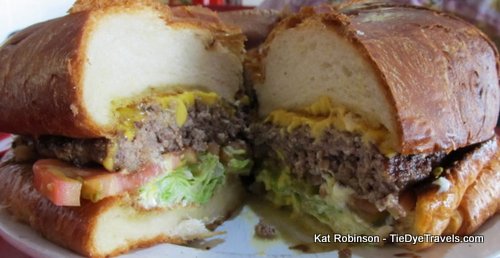 There's also the financial application here. The meat equivalency would be 15 burgers -- since a regular burger is 1/3 a pound. A regular cheeseburger and fries is $6.25 -- which means for the same amount of meat you'd have to pay a whopping $93.75! Of course, if you factor in the French fries, it'd be likely half that, but still. My recommendation? If you take a crowd, just order the dang giant cheeseburger and some side items. That'll do it, and you'll end up saving money. 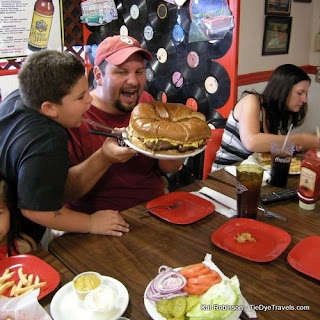 Did we finish the burger? No. The four people who dined on that burger that day didn’t get through but about half of it, and there were leftovers shared around. Now, you can, if you’re crazy enough, get that burger for free if you eat it with all the fixings, with an order of fries or onion rings and with a beverage in 45 minutes or less. I hear it’s been done, but I don’t see how.

If you’re in Fort Smith and want to experience this big burger, bring a crowd and head to Towson Avenue for a bite. Ed Walker’s is open every day from 10 a.m. to midnight, seven days a week. For more information, call (479) 783-3352.