Huzzah! Yarnell's is back!

It’s been a saga that perhaps my friends in other states haven’t quite understood.  How could one state get so worked up over one ice cream manufacturer?

When the Yarnell family announced suddenly on June 30th of last year that they were closing the doors to the 80 year old Searcy plant, there was much wringing of hands and breaking of hearts.  Just days before the most ice cream-friendly holiday of the year, Yarnell’s ceased to exist.  The doors were locked, the employees told to go home, and all that ice cream already produced was left in a freezer. 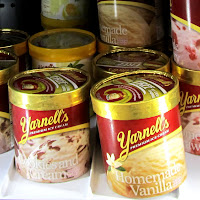 Someone distributed it -- while it disappeared from shelves in Little Rock within hours, I found cartons at CVs and Wal-Mart in Fort Smith through early September, and purchased my last carton of Ozark Black Walnut at a Mountain Home Wal-Mart in October.  That carton has been carefully preserved and saved.

Thing is, Searcy and Arkansas both love Yarnell’s, and through the work of a whole lot of people, Yarnell’s has come back.  The legendary Schulze & Burch Biscuit Company -- which already owns a snack manufacturing plant in town -- purchased the whole kit and kaboodle of the Yarnell’s empire: name, logo, plant, equipment, truck fleet and recipes.

Today I attended a press conference at the State Capitol where Schulze & Burch CEO Kevin Boyle, Searcy Mayor David Morris and Arkansas Governor Mike Beebe celebrated the return.  Governor Beebe got the first bite of Homemade Vanilla from off the line -- presented to him by Scoop, the new ice cream dude that will represent the Yarnell’s brand. 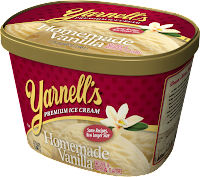 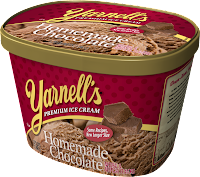 The ice cream carton is different.  Though the cartons retain that fabulous familiar deep red color, they’re now sqround -- both square and round, with a plastic top on them.  The new cartons are bigger -- 56 ounces compared to 48 -- and they seal better, which is good news for you if you actually manage to keep ice cream in your freezer for more than a day or two. 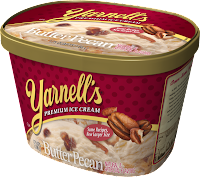 The new package also extends the shelf life... which, you know, I’m thinking might mean an eventual push outside the MidSouth for the ice cream.  Can you imagine -- Yarnell’s in Chicago, San Francisco, China?  Who knows? It’s also more “scoopable,” I’m told.  I’ll take their word on it. 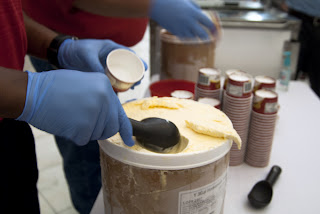 So, after the announcement, folks lined up for cups of chocolate and vanilla.  I tried both -- the vanilla first, which that very moment brought back so many memories.  It is indeed the exact same homemade Vanilla I remember, though several people I saw there swore it was better.  The chocolate?  Yep, still the same.  Same, though, is such a good thing.  I am so glad they kept to the standard recipes. 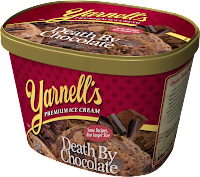 And then... well, I was getting ready to leave and realized that while everyone was flocking to the ice cream cups being filled from giant tubs, that there were actual cartons of the other great flavors up on a table up front -- being ministered to by a crew of dignitaries who were sort of halfway making their way through samples while being interviewed by the press. 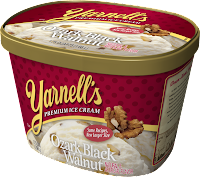 I stood up there with my puppydog eyes looking longingly at the Ozark Black Walnut until one of the Yarnell’s employees noticed me and graciously doled up a scoop for me.  Oh, sweet heaven, thy middle name is walnutty goodness.

They'll be available at Wal-Mart next week and within the next month at Kroger, Harp's and many independent Arkansas grocers.  Keep your eyes open!Now to go work off my ice cream-induced sugar high....
Told by Kat Robinson at 11:24:00 AM