Cats at the Crescent. 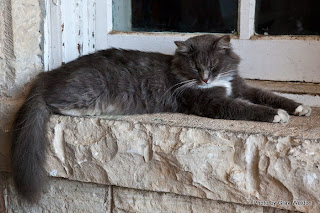 The 1886 Crescent Hotel in Eureka Springs is well known for many things. It’s been listed by many authorities as the most haunted hotel in America. I’ve taken you to dinner vicariously at the Crystal Dining Room within the hotel. And we’ll talk more soon about the cabins at the Crescent -- Frank Lloyd Wright style constructions built under the eye of David McKee, the protégé to Wright’s Arkansas protégé 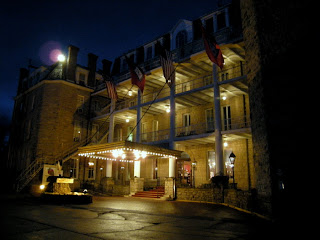 Faye Jones. But what most folks who haven’t visited the Crescent yet don’t know about -- are the cats. 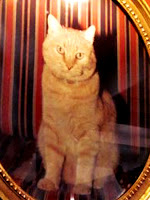 There have been cats on an off at the Crescent for decades. The most famous of these was Morris, a yellow tabby who came to the Crescent in 1979 and remained there until his death in 2000.  He came to the hotel at a time when the hotel wasn’t at its finest. In fact, for a while the hotel was boarded up, but Morris stayed. Folks called him the General Manager. 21 years is a long time for any cat, and today people still report seeing his ghost roaming the halls. 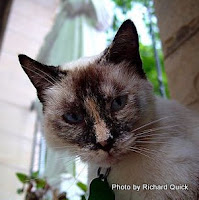 Morris was a staple at the hotel, and there’s a special cat door that was made just for him on the back side of the lobby out to the verandah, complete with steps. When he died, there was a gap that could really only be filled by a cat. At first, that cat was Tiddles, a brown Siamese mix who came to the hotel and stayed for a couple of years. There was also a white cat hotel owner Marty Roenigk brought in that lasted just a week. Some cats aren’t the hotel sort, I guess. 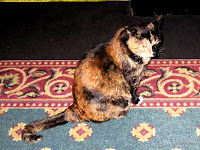 And then there were Frisco and Shadow. The two female cats were born at the Crescent in 2003. Frisco was a sweet cat who loved to sleep in the rooms with guests. She was a polydactyl cat -- having six toes on each front foot. She was comfortable around humans and had her share of run-ins with the hotel’s ghosts, often photographed with them. 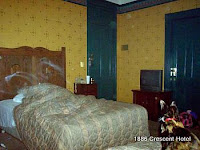 Rufus followed. Now Rufus, he was a shutterbug -- which is strange, since I can’t find any photos of him. I may even have photographed him a few years back, but darn if I can find the photos. Rufus had a crooked tail, and he had to be shown out of the receptions of several weddings. He’s supposed to be in different photos here and there. One day I might find one. He came to the hotel in 2007 and left sometime in 2009. 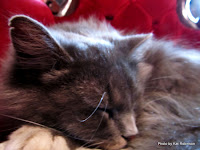 So, there’s a history of cats at the Crescent. They’re just as much a part of the mystique and intrigue at the hotel as the ghosts, I’d reckon. But you don’t hear much about them until you go. That’s a shame, because they’re awesome cats.

The current feline residents of the 1886 Crescent Hotel are Casper and Jasper. Casper came to the hotel the week of Halloween 2009. He’s a big fluffy gray cat who loves to lounge around. 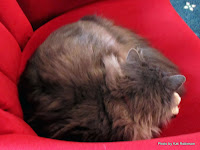 Casper is afraid of very little, and loves to stalk dogs that come to the hotel with their owners. On just about every visit I’ve made to the Crescent in the past couple of years, Casper has been camped out in some spot or another. When it’s cold or wet he’ll take over a chair in the lobby; when it’s sunny he likes to find a windowsill for sunning himself. 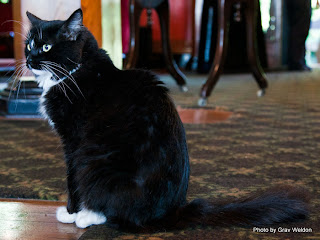 Jasper is a bit of a scoundrel. The black cat with white paws and belly can often be found crouched under a baggage trundle, taking a swipe at shoelaces as people pass. The staff has to watch out for him especially during receptions. Seems he’s fond of white tablecloths, punch bowls and wedding cakes. He’s been known to dip his paw into cake frosting and has been caught more than once in the act. Jasper also loves to hang out curled up in a flowerpot. 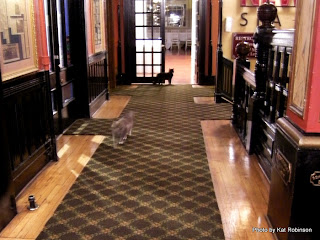 I’ve encountered the pair several times. There was one stormy night in March 2010 where I’d come to dinner with the hubster. We sighted them from the lobby -- Casper all nonchalant, walking the halls while Jasper peered in at the wedding reception being set up for the next day in the Conservatory. 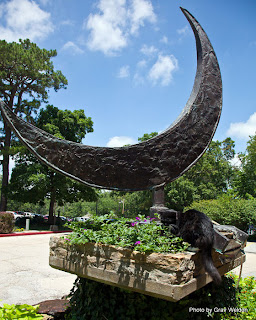 My photographer even managed to pick Jasper up and carry him around a bit this past summer, taking him out for shots out by the hotel’s front entrance. Jasper was pretty copacetic about this, though afterwards he did have to take off for a quiet place and a bath.

Now, you can’t quite book a room with a cat for company; it’s up to them whether they’d like to spend the evening with you. But you can choose to share space with the two creatures in their native habitat.

See Kat's interview about the Crescent Hotel's cats and cottages at www.arkansasmatters.com.
Told by Kat Robinson at 10:18:00 AM