Pieday: Grasshopper at The 178 Club. 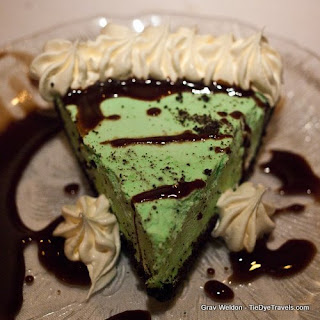 Great restaurants make stuff from scratch. 178 Club in Bull Shoals makes its sauces, its dressings, its pastries, its rubs and a whole host of other things from scratch, including an ever-changing array of desserts.


One of those desserts was this grasshopper pie… a pie I had often encountered in my youth but missed during the whole breadth and span of my pie research for the big story at Thanksgiving. That seems inconceivable, but it is true.

The mint-and-chocolate pie was very popular in the family circles I traveled in as a child. But I have seen that combination very little in restaurants as an adult. Oh, sure — you can get mint chocolate chip ice cream at the store — there’s even a gum that’s mint chocolate chip, which I find a little strange. I’ve had mint leaves atop different chocolate confections by our local top shelf chefs, but this one simple pie has not been on any menu I’ve nodded my way through in quite a while. The closest I’ve seen has been the mint chocolate chip ice cream pie at Hunka Pie, and while it’s on the menu I can’t recall actually seeing it offered on any visit I’ve been there.

So hearing Grasshopper Pie mentioned by our waitress in her schpiel was ear catching. Mind you, I was quite full from dinner already. I hadn’t actually eaten pie since I had wrapped up my primary pie research the first week of November, but I wanted this. And I got it. 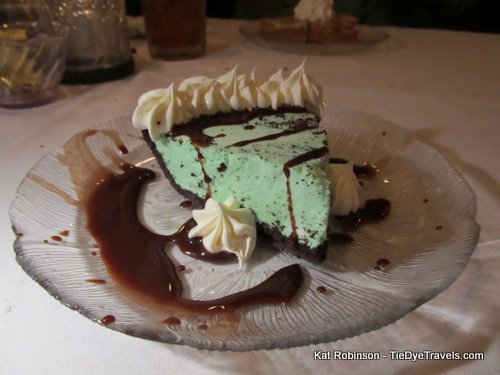 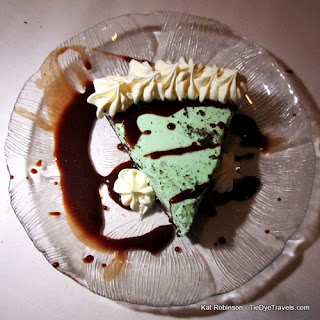 It was green. Yay! Grasshopper pie SHOULD be green. Additionally, it was not a Jell-O pie or an ice cream pie. This was a marshmallow based pie. I could taste the crème de menthe (where the green came from) clearly but not too strongly, just enough to balance out against the Oreo cookie crust. There was also a light chocolately taste, probably from crème de cacao. It was served up with a drizzle of good old-fashioned Hershey syrup (like the stuff from the can, remember that?), slightly chilled with some whipped cream to boot.

It was, in many ways, just minty enough to negate the need for an after-dinner mint. 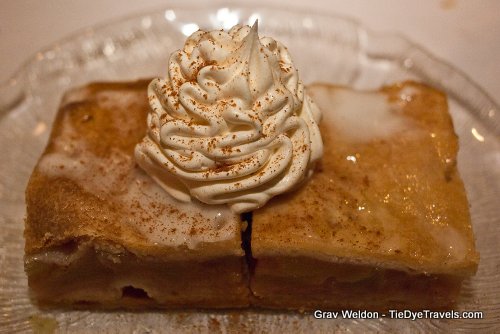 My dining partner chose the apple pie instead and got this surprise - a rectangular vision topped with ice cream. The buttery crust over a barely-spiced apple filling was satisfying, but it didn't come close to my grasshopper pie.

Both of these pies came at the end of a remarkable dinner. Mind you, Bull Shoals itself hasn't been around that long - only founded in 1954 on the last peninsula into Bull Shoals Lake as it formed. Because of its location, it's grown slowly, and that's just fine with the folks that live there. How the restaurant came about is something more.

Bob and Dee Fox moved to Bull Shoals in 1975, when they purchased the Coral Courts Resort. Seeing a need, they built - a bowling alley. That''s right - the Foxes' son was an avid bowler in school and needed lanes, so the family built a bowling alley. At least, that's how I've heard it. In 1980, they added a full service restaurant, the 178 Club. 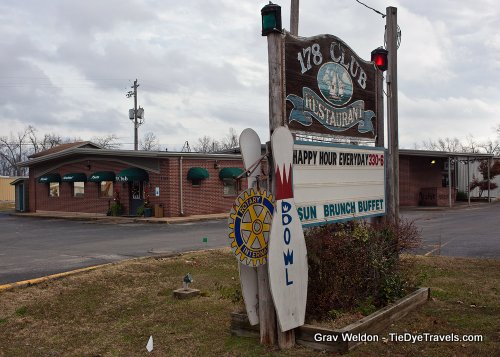 The 178 Club is truly top-of-the-line dining, with fantastic steaks, baked Brie and escargot. The burgers bear names like “The Strike,” “The Split” and “The Gutter.” And the restaurant’s one of those few where you can bring in your catch of the day and have it prepared for you, complete with soup, salad and all the fixings.

These were the other dishes we tried while we were there. 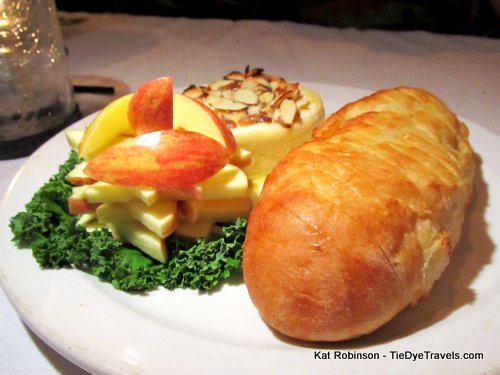 We were impressed by the very first thing that came to the table - a baked brie plate complete with an intricately stacked pile of apple slices and a loaf of fresh housebaked bread. 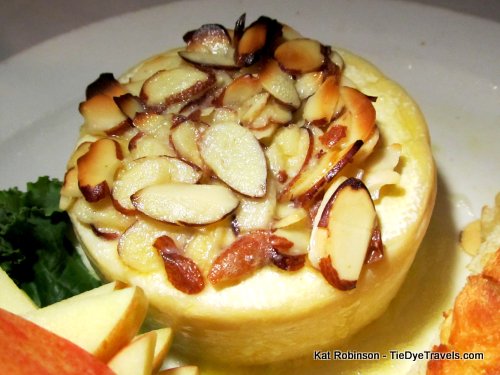 The candied almonds and such were a lovely touch to the brie.

Both salads came with handmade dressings of some note. 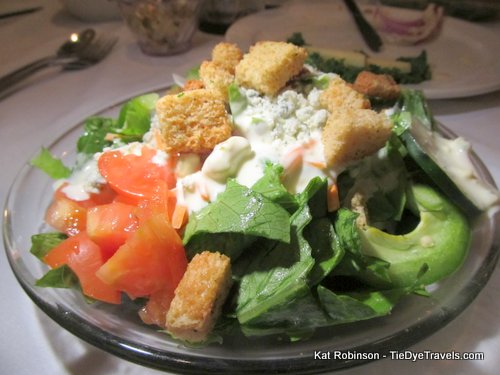 I was particularly fond of the house blue cheese. 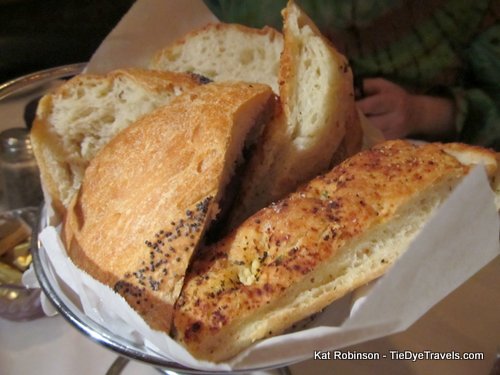 All the different breads we sampled from both the basket and the brie plate were excellent. 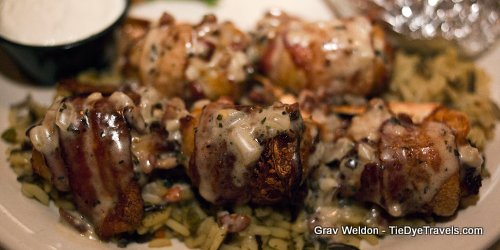 Grav went with a truly outrageous dish - shrimp stuffed with crabmeat, wrapped in bacon and baked, served over wild rice with a lovely drizzled cream sauce. 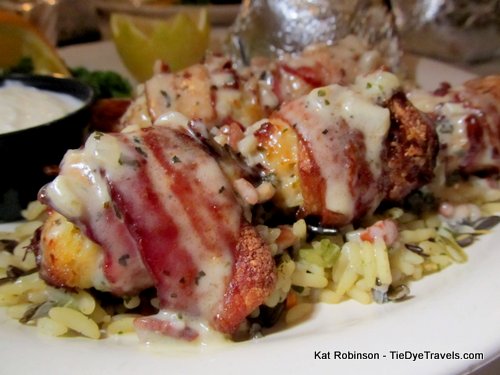 It looked and smelled so good, I wish I could have eaten it. 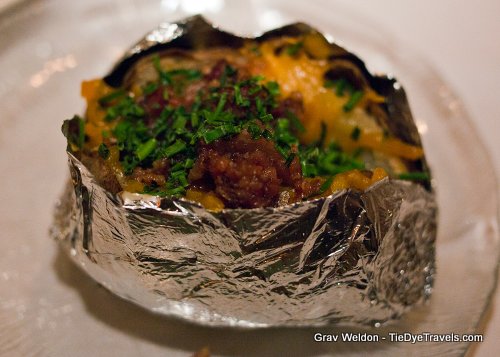 Grav even chose bacon for his baked potato. 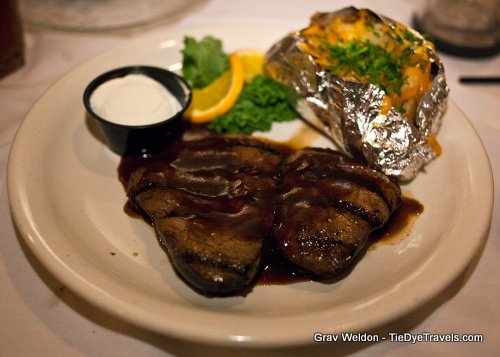 I went with the London Broil and I was not disappointed. 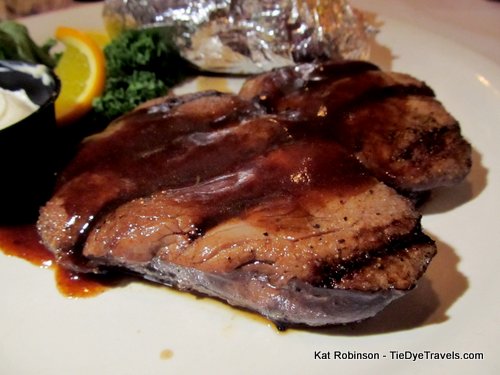 It came with a lovely reduction sauce with what tasted to be a little red wine in it along with a baked potato practically soaked with butter and cheese. 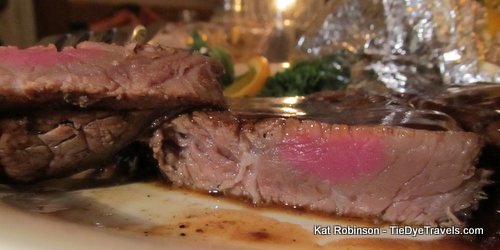