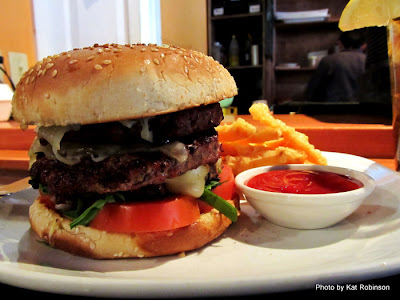 A sushi place that does burgers? Really?

Sounds crazy, but Sushi Cafe in the Heights manages to make a pretty mean burger to go with all those pretty sushi creations. Don't believe me? You should give it a shot.

I'll be the first to admit, I didn't think it was possible at first. I love Sushi Cafe — they do some of the best sushi in the state, no doubt. But a burger is a far sight away from a nice maki roll. 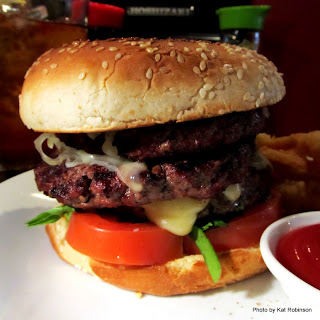 I had to give it a go. So I went. I went and ogled the burger menu and gasped a little at the same time. With the exception of the 1/3 pound Texas Style Burger on the lunch menu ($7.50), all of the burgers at Sushi Cafe start at $10. That's a bit pricey. The most expensive burger on the menu is $28! That's... well, that's just out there, even if it is made with Kobe beef.

The basic burger is the Tokyo Cowboy ($10), and then there's a double with bacon and an Italian version. You know me, I like to go for big. So I decided on the Titanic Burger ($12), a purported pound of cow flesh on a bun served up with sweet potato fries. And just so I didn't sit there and get envious of all the folks eating the restaurant's intended dish, I ordered a Rainbow Roll ($10). Because I lack sanity, that's why. 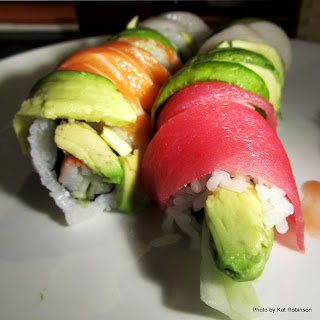 My Rainbow Roll was ready in less than five minutes. It was simple and pretty — salmon, tuna, yellowtail and snapper along with avocado on top of a California roll — and it would have been just enough for lunch. The plan had been to take half of it home with me. That didn't happen. The yellowtail in particular was rather succulent and perfectly soft and just irresistible. 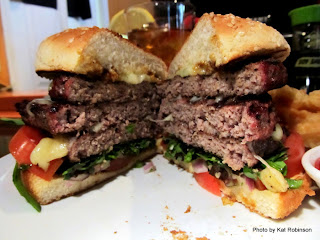 My waiter, who'd seemed a little surprised when he took my gargantuan order, seemed more surprised to discover I had an empty plate when he brought the Titanic Burger out to me. And I was pretty surprised to see just how tall this thing was. It's a triple patty burger, three big medium-well char-grilled Black Angus patties on a toasted and buttered sesame seeded bun. I was offered mustard but declined. There was the barest hint of mayo on the top bun along with some caramelized onion sweet goodness, Swiss cheese melted between each of the patties, all sitting on top of field greens and a thick slice of red tomato and red onion slivers. 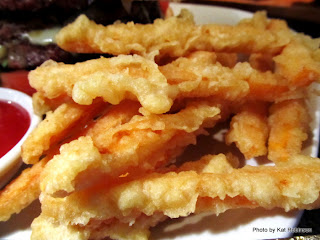 The burger, though... I have a complaint. Because Black Angus is so lean, there was little room to squish the burger. It was almost impossible to take a bite, even smooshing down the bun and removing the tomato. For one to consume this creation normally, one would have to figure out how to unhinge their jaw. 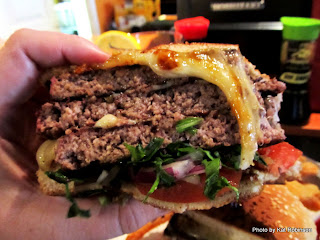 But it'd be worth it. The nice char from the grill, the buttered buns, the cheese and those caramelized onions, they make for a rather excellent burger. And it's so big, if you get through more than half of it you're in trouble.

I took about two thirds of my burger and half my fries home with me and still felt rather overfilled. It was worth it, though. And now I know where I can send my sushi AND burger loving friends when they want to go hang together.

You'll find Sushi Cafe on Kavanaugh a block east of University, on the opposite corner from Boulevard Bread Company. (501) 663-9888 or check out the website.