Bonnie's in the Delta. 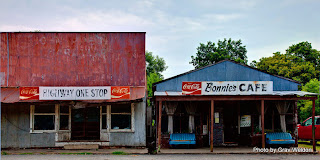 When is a burger joint not a burger joint? When it’s the heartbeat of a community. I found a place in Watson that serves as the lunch plate of a whole town. 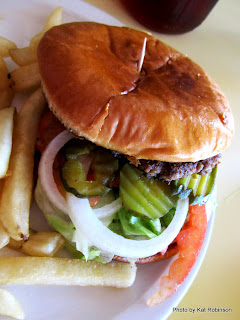 First discovered it while traveling in the Arkansas/Mississippi River Delta this past summer, on my way out to Rohwer. It looked inviting, with its Coca Cola banner over the front porch and plenty of cars out front. But I’d just eaten breakfast and was not quite ready for lunch. I bookmarked it for a later visit.

So come March, I’m preparing a trip to New Orleans and decide that it was time to take that side-route and check out the little place facing the railroad track on Highway 1.

My traveling companion and I dropped in around 10:30 a.m. on a Thursday morning with an appetite. The lone woman in the kitchen told us to sit wherever we liked. 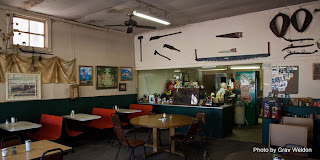 I never did ask her if she was Bonnie. She didn’t look at us like we were crazy when we took photos and we didn’t bother her none. She came over and offered us a choice of breakfast or lunch. There was no menu, just an ancient board on the wall that appeared to have gathered dust and yellow. Ever on my burger quest, I asked for a regular burger. My companion went for the lunch special. Our hostess brought us massive Mason jars of beverage and we quietly waited while she went to the back and got things started.

The day’s average patrons dribbled through… too early for a full lunch but not too early for pickups. A guy the hostess called Lee came through the doors. Before he was halfway across to the register at the back she started to holler. “Mayo and ketchup, right?” He nodded, and she continued “fries ain’t done yet, it’ll be a few.” Lee gave her a nod and a gesture and went out front to sit on one of the two van benches located to either side of the front door.

“So how long have you been here?” I asked across the room.

“About 25 years now,” she hollered back, continuing to work on our meals.

A younger lady, perhaps my age, came through the doors and entered the middle of a conversation. I caught “she done died up in the hills. She was 96 years old, never did have no kids.”

I looked back out front where Lee was waiting. I saw him get up and turn to come inside. The hostess met him halfway across the room with a couple of white sacks. He nodded and turned out. I have no idea if any money was exchanged. Probably was when I wasn’t looking. 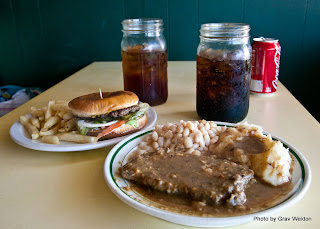 I’d no more than jotted down a few notes about the exchange when our lunches arrived. My companion’s lunch special was a smothered country fried steak, potatoes and Great Northern beans, the former two doused in a somewhat thin brown gravy, all of it steamy and smelling like a country kitchen. 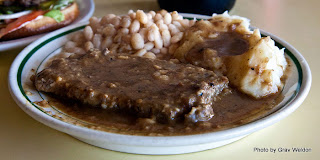 The beefsteak was crunchy and fork-tender, lovingly and lightly spiced with salt and pepper and maybe a little seasoning salt, a generous hand-sized portion about half an inch thick. The potatoes were hand-mashed. And the beans? 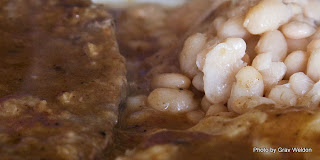 I had to get some beans myself. I don’t do that much. But these were slow cooked buttery Great Northerns and I couldn’t help myself. I snuck several off my companion’s plate. Our hostess noticed this when she came out to bring a hunk of cornbread and a biscuit to go with my companion’s meal. She brought me back a bowl of my own to savor. 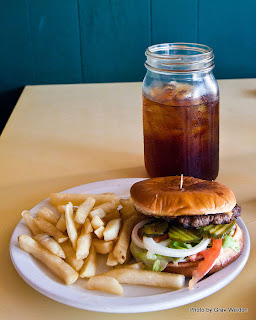 Not that I needed more food. The third-of-a-pound flat-smashed patty on my burger was crusty from the griddle and glued to the top bun by a single slice of American cheese. It was a classic American burger, pickles right up under the meat, a generous helping of white onion ringlets, tomato slices and a leaf of iceberg lettuce above the bottom bun. It had the sort of flavor you’d get at a drive-in restaurant. I approved. 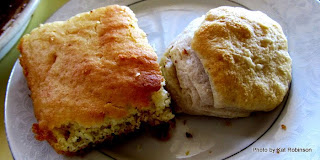 My companion had been delivered a layered biscuit and a hunk of yellow cornbread… which I confiscated for use with my beans. It was that right blend of yellow cornmeal with its natural sweetness, butter and little else, no added sugar to intefere with the bean consumption. I approve. 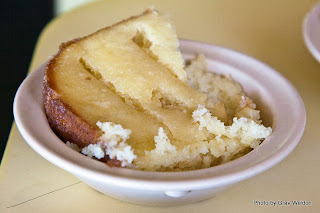 Our hostess came out and asked about dessert -- both of us first refused, but she told us she’d bring us a small piece. She returned with something I haven’t seen in ages -- a corner slice of buttermilk cake, just like the sort of cake I could find at any family gathering growing up in south Arkansas. It was a basic butter cake, almost a pound-a cake (a pound-a this, a pound-a that), with a little tang from the buttermilk and just the slightest hint of cinnamon. It made my day.

We couldn’t eat it all, and asked for something to take the cake with us. A piece of plastic wrap over a bowl sufficed, and we were shortly on our way.  I have no idea how much everything actually cost -- our ticket was $11.34 but that included that big lunch special, my burger and two drinks.  Who knows? 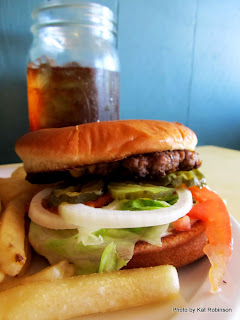 Bonnie’s really isn’t the sort of place you’re going to find on an average trip. You have to be going to Watson or somewhere close by to even find the place. The only other places in town we found where you could purchase anything were a liquor store and a small convenience grocery in a mobile home. There’s not even a gas station. Towns like Watson tend to blow away without an anchor.

I suspect Bonnie’s is that anchor, and I’m glad to see such a place survive and thrive, serving up good home cookin’ and the like. I must make another stop there for breakfast some time when I am back in that neck of the woods. Else I should make a special trip.