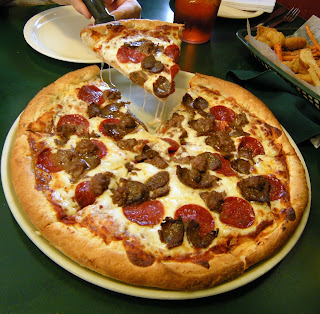 I have found in my many years that there are a few foods everyone loves. They may not like a certain brand or restaurant that serves that sort of food, but they like that particular type of food from somewhere.

Pizza’s one of those foods. I tend to like the cracker crust style pizza of Iriana’s, Main Street Pizza in El Dorado and U.S. Pizza Company. I have a friend who leans the other way, preferring a Chicago-thick crust and lots of heft, like you find at Damgoode Pies and Old Chicago. Another friend is definitely on the OW Pizza side.
Hot Springs has its own classic pizza joint, Rod’s Pizza Cellar. It’d been years since I’d been, I think maybe I wasn’t legal to drive yet. Or if I was, I wasn’t legal to drink. I know the place by reputation and have been sending folks there for some time. But even I know it’s foolhardy to expect consistency over a long period of time. I simply had to make the trip myself..
My dining companions and I dropped by on a Saturday, just after the buffet was closed. We had gone in expecting to order completely different pizzas -- this being my Chicago-crust loving friend -- but instead we decided to give the Lil Heifer a try. It just looked so… tasty. We also decided to split the difference and not decide on any specific appetizer, going for the Taste Teaser instead. 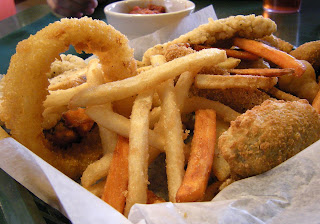 The appetizer basket came out first, naturally. The Taste Teaser ($9.99) isn’t the neat little sampler platter you get other places with neatly segregated items and dipping sauces. This is a big basket of fried food, from parsleyed JoJo potatoes and French fries and sweet potato fries to breaded chicken and cheese sticks to Jalapeno poppers and beef and cheese filled T-Ravs. There was literally something for everyone, along with a hefty side of marinara for dipping. The basket was bigger than what I usually eat total for lunch, and I’m glad there were three of us to share it. 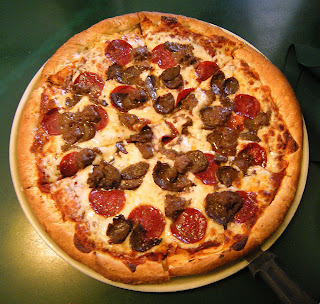 Then out comes the pizza. Now, I have to tell you, I miss pepperoni. Most places use a pork pepperoni that’d send me into days of agony. The Lil Heifer ($19.99 for the 13” Sicilian thick crust we got) was topped with all beef pepperoni, Angus beef chunks and Rod’s own all beef smoked pepperoni. While I could take or leave the Angus beef bits, the all beef smoked pepperoni was, in my humble estimation, da bomb. Woodsy and thick and meaty and spicy and all those good things you want meat to be. I would have been happy with nothing but that one particular topping.
We did notice a few things that Rod’s gets right about the pizza. The sauce on there is different from the marinara served up with the sampler platter. The cheese is not your average Sysco blend too many of our local joints order up and use. We like both of those things. The crust, though… okay, it was good. It was filling and we took half of the pizza home with us. But it doesn’t seem to be your traditional yeast crust. It seems to be more like a biscuit type dough in action. I’m not saying that’s wrong. I’m saying it’s different, and it was delicious. 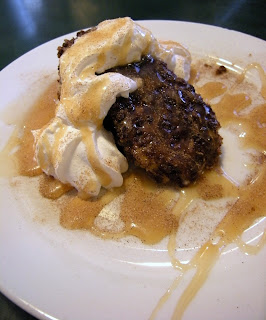 Part of the reason we didn’t even try to go further on the pizza was because I wanted to check out the Fried Cheesecake ($4.95). I mean, fried? Cheesecake? As my companion noted, that’s just gilding the lilly. It reminded me of the fried ice cream you get in Mexican restaurants. While the cheesecake itself was typical, it seemed to have been rolled in a cornflake sort of mixture and dunked and deep fried, then drizzled with a hefty amount of caramel, dusted with brown sugar and cinnamon and topped with whipped cream. I wasn’t complaining. The frying process had made the inside nice and soft, except at the back end. No complaints here -- there was nothing left on that plate for our waitress to take back.

Of course, we didn’t get into the pasta or the salads or any of the other great things you find at Rod’s, because what we did get was pretty darn filling. But now when I recommend it to my Oaklawn-bound friends, I don’t have to just say “hey, it’s been around 35 years, that says a whole lot.” I can look them in the eye and say “you gotta try that all-beef smoked pepperoni, seriously.”
You’ll find Rod’s Pizza Cellar at 3350 Central Avenue, about half the distance between Oaklawn and the Bypass on the west side of the road. They’re open every day except Monday from 11 a.m. to 10 p.m. You can give them a call at (501) 321-2313 or check out their website.