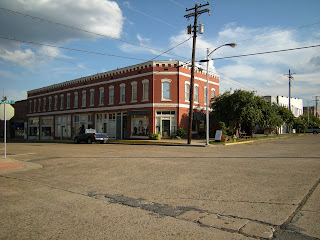 I’ve held off on talking about Opal Mae’s; the diminutive eatery on B Street smells delicious and looks cute, but its survival seemed a little up in the air at first. I’m happy to report it’s the little restaurant that could… make us really comfortable and full. 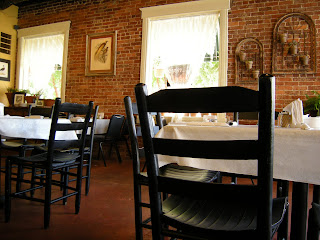 On our first visit, my traveling companions and I came towards the end of the lunch shift. We fully expected to being turned away so close to the close of their buffet, but instead were welcomed and offered two options -- eat off the buffet or at the table. We decided to see what table service would be like. 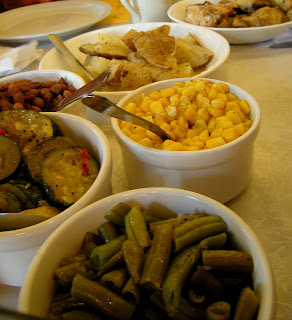 I was thrilled to discover this “family style service” meant bowl after heaping bowl of food piled before our trio, just like a Sunday dinner after church at the home of a close relation. Two by two they came -- baked chicken and roast beef, pasta and cheese with ham and sautéed squash, pinto beans and green beans, buttered corn and buttered potatoes, brown gravy and rolls. 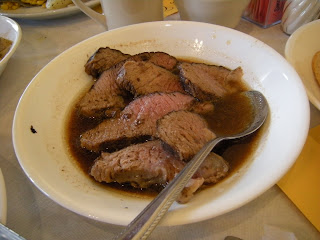 Rather than the standard plated lunch or standing in line to load a plate, we passed each and dug in and had our fill of whatever we wanted. We were even offered more of every item when a bowl turned up empty. And I was surprised at the check, which revealed the buffet price of $7.50 each… an amazing find for the level of service we received. 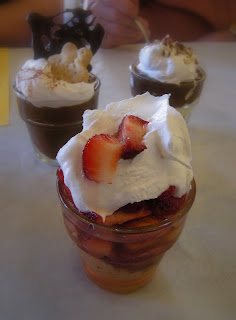 Each of us got talked into dessert -- a mini-dessert ($1.50 each), that is. One companion went for the Chocolate Pie, another for the Possum Pie. Both were confections of custardy pudding dolloped onto crust rounds within a tiny glass pot, topped with a considerable wisp of whipped cream garnished with a happy edible perk of hardened chocolate or crunchy graham crust bit.

I was quite pleased with our mini-dessert, Fresh Strawberry Pie, a petite cross between pie and parfait with layers of graham crust stars, fresh strawberries in light syrup, and whipped cream. My curiosity was satisfied, and none of us felt guilty since not a crumb of desserts was left behind. 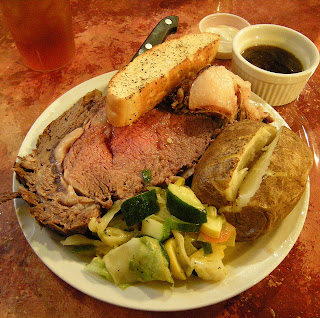 A few days later we went back to confirm the whispers we had heard on our first visit. Apparently the chef is a veteran of Cagle’s Mill (before its tragic move and menu change at the Holiday Inn). The rumor was that he’d brought over his prime rib expertise, and we were eager to find out if the claim was validated. 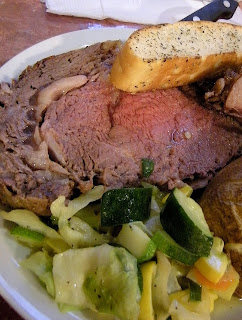 I’m so happy to say hey, it’s true. The dinner plates that came to the table were almost identical to what we had been served a decade ago at Cagle’s Mill, down to the twice baked potatoes (for two of the three of us), the medley of butter-marinated squash and zucchini, and the spear of a garlic buttered toasted French Bread spear… with one minor difference. This prime rib covered more than half of the plate, so much so that the accompanying horseradish sauce and au jus had to come in their own ramekins on the side. One of my companions even declared upon completing his entrée that the hefty and well cooked serving of beef was even better than that of the former prime rib champion. And at $17.50, it came to a smaller bill than we’d encountered at the other place. 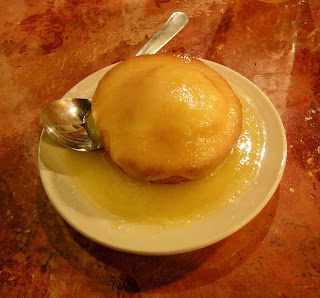 Of course, we had to have desserts again. This time around, while my companions once again chose chocolate options, I went for the Lemon Cake ($2.50), an individual pudding-rich yellow cake topped with a rich lemon custard. It reminded me of how good Jackson Jumble lemon cookies used to be, when I was a kid. Yum.

Seems Opal Mae’s is starting to build a following, which is something considering it shares a town with Stoby’s, Feltner’s Whatta-Burger, Taco Villa and Big Red. That’s saying something.

You’ll find Opal Mae’s at 321 West B Street (off Main Street) in Russellville. It’s open for lunch Monday through Friday and for dinner Friday and Saturday. You can also call them at (479) 967-OPAL (6725).