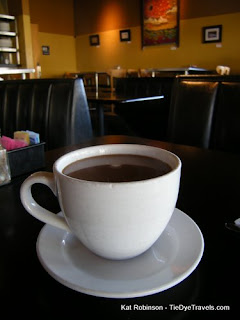 I've been doing a little early morning research as of late... after a reader suggested that I don't get out and do breakfast enough.  Well, dear readers, I hope to fix that this week with a selection of blogs on several Central Arkansas breakfast locations.

I have lamented the fact that the chains seem to be winning at breakfast, simply because of the sheer number of available drive-thru windows for morning commuters.  Sitting down to enjoy the first meal of the day?  Well I hope to help you out.


Which is why choosing Satellite Café to start off with is a little funny... since it too has one of those drive-thru windows.  But that's all right... you can go in, sit down as I did, and enjoy a nice hot breakfast, too.

I dropped by one day last week for a mid-morning escape, aching to leave behind the briskness of the morning. I was allowed to choose my seat from among the crowd of booths in the center of the room. 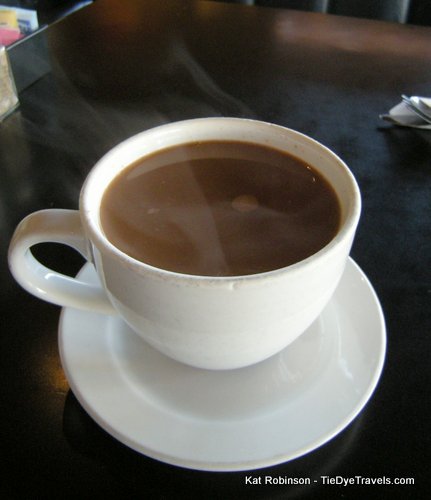 The beverage menu is as vast as the dining options, and one is given a choice of coffee drinks or not coffee drinks. Though the mochas and lattes and Cubano and such looked inviting, I opted instead for a nice cup of chai ($3.75). Out comes this 12 ounce virtual bowl of creamy, thick chai tea, dark enough to be coffee and rich enough to be caramel, too hot to drink but perfect to cup in my hands and ward off the cold wind that had settled into my bones. The steamy beverage continued to wave lofty fingers of vapor around throughout my meal, and its last tendrils of lightly sweetened warmth held me through the entire meal. 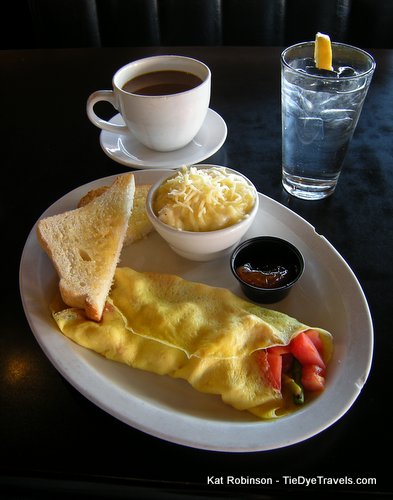 For the actual meal, I decided on an omelet. With three add-ins (asparagus, tomatoes and Cheddar cheese) it came to $7.50. The omelet came to me accompanied by two lightly buttered slices of Italian bread toast, strawberry jam and a hefty bowl of cheesy grits. The omelet itself was on the crepe side -- no pancake batter filler here -- with plenty of chunky tomatoes and asparagus spears for every bite. 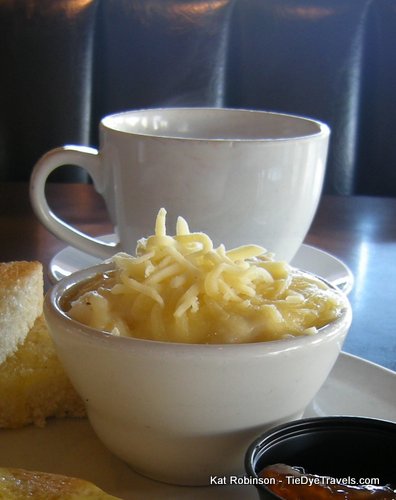 It was the bowl of grits, though, that did their best to sate my appetite and which stayed with me through the day. Thick and slightly clumpy, the white substance was augmented with a white cheese that held secrets of light spice and heat for me as I devoured the bowl's contents. Grits from a Heights cafe, you say? Yes, indeed, and they were quite good.

My check came to near $15, which is more than I would normally care to spend for breakfast. But that chai, that rich deep bowl of heaven, was worth it.