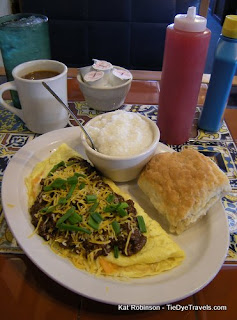 Folks know Stoby's by its cheese dip.  That cheese dip is everywhere.  And it's good.  But that's not all there is to the restaurant.  In fact, there's a lot more than just the Stoby sandwich, too.  There's a whole lot of food on the menu.

My favorite meal at Stoby's is breakfast.  Now, usually I go for The Northerner ($6.49), corned beef hash and two eggs with a biscuit and hash browns.  I've just about become predictable with that, stopped looking at the menu years ago because I just knew what I wanted.  It was the same when I went to school at Arkansas Tech in the early 90s, the same when Stoby's opened up briefly while I was living in Jonesboro.  And it's the same when I can make my way up to Russellville in the morning hours.  Until now.

You see, I'm trying out new things, because if I know more of the menu of a place then I can share it with you. 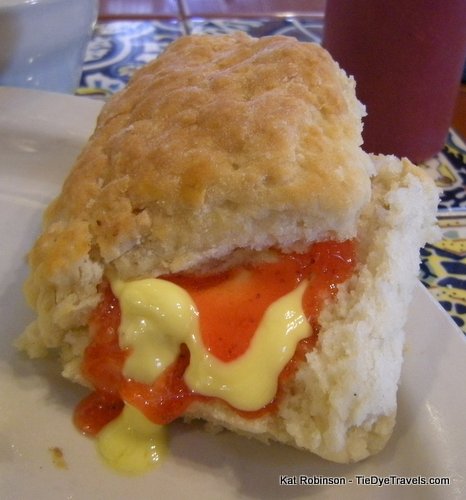 I could already tell you about the fabulous biscuits, moist and a little cakey, soft and hot.  I could already sing the praises of Stoby's housemade strawberry jam, which comes served up in a squirt bottle for easy application along with a bottle of squirt Parkay.  The biscuits are just salty enough to make your mouth water; the jam reminiscent of homemade strawberry compote for shortcakes, that bright red that almost doesn't seem natural.  Yeah, I could tell you all about those. 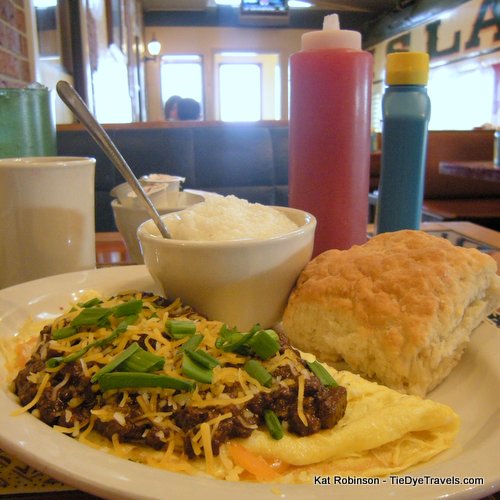 But I decided to give the Ole' Omelette ($5.80) a try.  I mean, how could you go wrong with Stoby's chili, cheese and such.  I was well pleased.  The chili and the cheese do fine together with the egg, in a stick-to-your-ribs sort of way.  Paired up with a hearty bowl of grits, and you have a meal that won't leave you craving lunch. 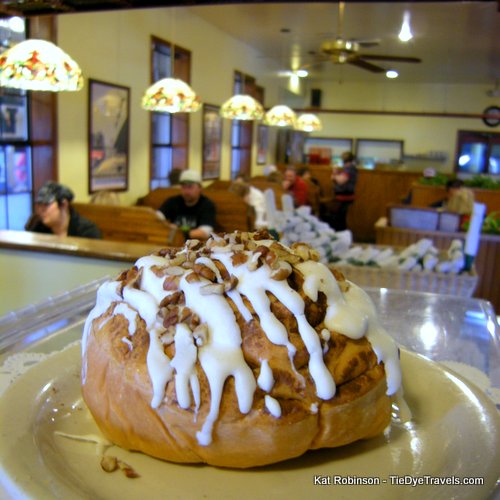 So, I can't pass up talking about the cinnamon rolls, one of the best bargains you'll find in Russellville.  For a buck-85, you get this fresh baked confection of rolled dough and cinnamon, topped with a gooey frosting and pecans.  That and a cup of coffee is really all I need in the morning, but of course I always order more.  Sometimes I just get a cinnamon roll to go to much on later.  They're made across the parking lot over at PattiCakes, the bakery run by the same folks.   You know, the place with the fudge. 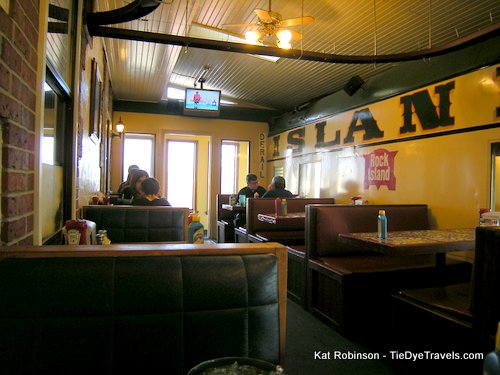 I've been talking all about the Russellville location -- mostly because that's where my heart lies as far as Stoby's goes.  I was happily introduced to the rail depot-encased restaurant when I was in college and it's still a big favorite of mine.  But if you don't want to drive that far, you can go to the Conway location.  The food's just as good. 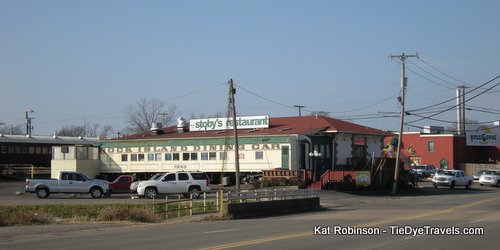 You'll find the Russellville Stoby's on Parkway (wow, seems weird not to call it "D Street") a block west of Arkansas.  In Conway, it's on Donaghey north of UCA.  Oh, heck, just go look at the website.
Told by Kat Robinson at 11:36:00 PM