Grillin' Up Good Eatin' at Blackwood's Grill and Gyros. 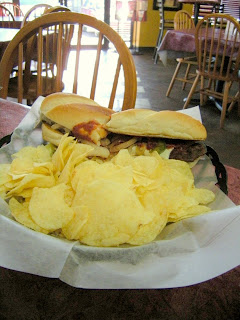 So, you want Greek food. In Conway. Well, you can get what you’re looking for at Blackwood’s Gyros and Grill. But you’d be missing out on a lot of you didn’t pay attention to all the neat stuff the restaurant has to offer. 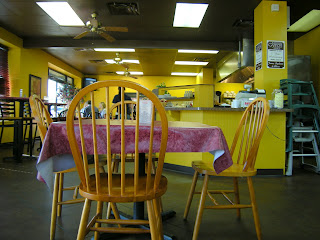 It’s not a new place -- in fact, I believe it’s been in business about 20 years now. It’s just relatively new to me. My mom and I found the place while driving around one day in May 2009. It looked promising, so we walked on in. Our waitress greeted us with a smile, quick drink service and a lot of suggestions.

We scanned the menu and went for a couple of sandwiches. We decided to try out the spicy Feta dip ($1.95) that was served up with celery sticks. The dip was also a good match for the potato chips, a spicy mix of Cajun seasoning and Feta cheese you can also get as a spread on your sandwich . 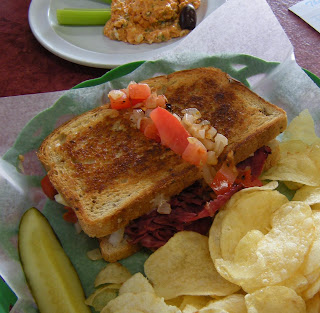 Mom went for the signature Blackwood sandwich ($5.45), a Reuben with extras. The corned beef on rye also sported Swiss cheese, grilled onions and tomatoes, and a specialty sauce. You know my thing about Reubens -- I like them, and I’ve discovered a Reuben sandwich listed on more than 90 percent of Arkansas menus, no joke. And I have to tell you -- though I love Reubens, this one was far better. And in case you were asking -- yes, there’s a true Reuben on the menu, too. 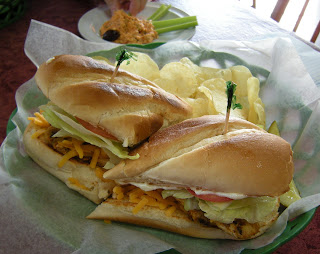 I went for the Louisiana Rex ($7.29), a hunk of chicken breast cooked in Cajun spices and served up on a French bread roll with shredded Cheddar cheese and tomatoes with a hefty dash of mayo. Tasty, but not especially hot, which was fine with me. 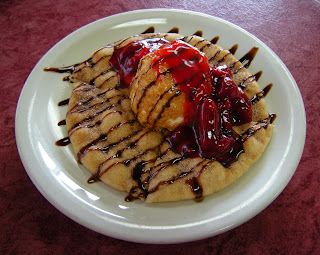 We decided to share dessert -- and enjoyed Fried Ice Cream ($3.50) -- a deep fried pita topped with a cornflake-dipped and deep-fried ball of vanilla ice cream drizzled with chocolate sauce and strawberries. Oh, man, it was good. I’m glad we only ordered the one, because it was rich. But oh so good. 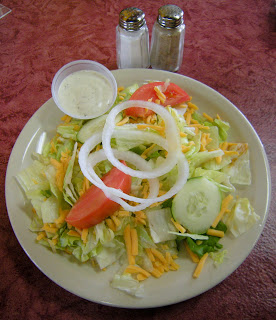 So, of course we have to go back. And we did. She ordered up a salad and the Roy Allen ($6.49), an Italian sausage link sautéed up with peppers and onions in marinara sauce and topped with marinara on a French sourdough roll. The sandwich was so spicy Mom broke out in a sweat -- spicy, indeed. The salad was pretty decent, too. 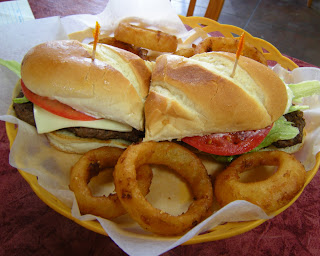 Well, you know me. So many people ask me about where to find the best burger… and yes, one of these days I’ll do a post on the best burgers in the state. I’m sure Blackwood’s will qualify. See, there was this mention of the Giant Jerry Double D Burger ($10)… which was just listed as being a two patty giant burger. We order it -- but our waitress, perhaps surprised that anyone would order the monstrosity, put us in for a Giant Jerry D Burger ($6.89), which in itself is still a rather large burger. I didn’t recognize at first that this was a smaller burger… a 12 ounce burger served up on a French roll is pretty big in itself. 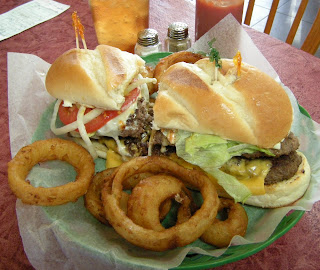 Our cook, though, came out and asked us if we really had ordered the Double D. And he whipped it up again, 24 ounces of burger (two long patties), a kitchen sink of condiments and two types of cheese and burger veggies that still managed to seem light compared to the sheer amount of meat on the bun. The only problem with that sort of burger is there’s no really good way to get it into your mouth. It took a lot of smushing, mashing, squeezing, and flattening to get it to oral-consumption size. In the end, I used a fork and didn’t even get halfway through. Thank goodness for little brothers who like burgers… he got our take-home box.

I’d gone for the onion ring upgrade -- a good choice, since the batter and onion were of excellent quality and cooked to a fantastic crisp. Chips come with all sandwiches, French fries are 75 cents extra and onion rings will run you $1.40 as a side. 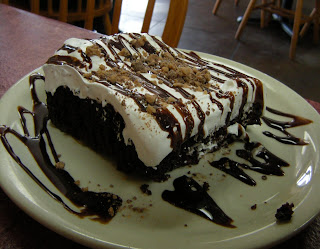 So, dessert again. Of course we had to try something different. So we ordered up the Choc-Oliver Delight ($3.50), a seven or eight inch square hunk of moist chocolate cake topped with chocolate sauce and Cool Whip (not frosting) and Skor candy bar crumbles. It was good, it was an excellent but not overly sweet balance of cake and cream, and it was too much for the two of us to finish.

Blackwood’s Gyros and Grill is open from 10:30am to 9pm Monday through Saturday. It’s closed Sunday. You’ll find it at 803 Harkrider in Conway -- right by the bank and about a block away from Old Chicago Pizza and Doe’s Eat Place. Give it a try. Phone number is (501) 329-3924. Sorry, no website.