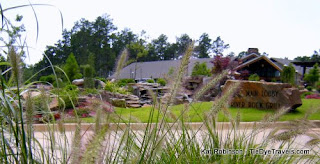 Winthrop Rockefeller was a big man, a heck of a man. His footprint on this state is legendary. This is not his story. This is how my visit went to the land atop Petit Jean Mountain that was his spread, for a very specific event called Bountiful Arkansas Day. 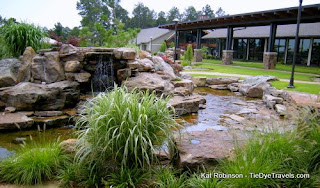 My luck not being with me, I found myself having to make crazy transportation arrangements early on, which delayed my arrival until around 10:30am. I nodded through registration and was met by two individuals. 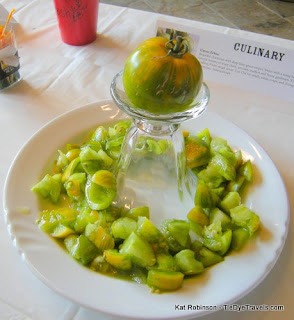 The first, David Davies, welcomed me heartily to the top of the mountain with a bear of a handshake. He’s the executive director of the Winthrop Rockefeller Institute, a project of the University of Arkansas system. The second, Kathy Edgerton, became my tour guide for a good portion of the day. 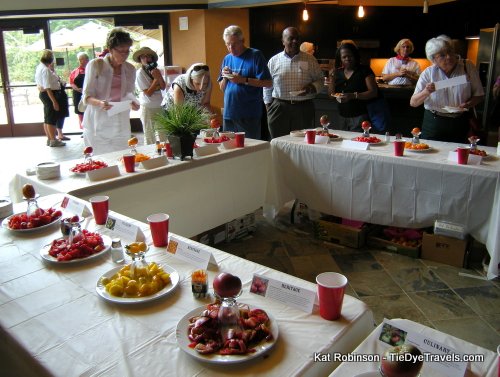 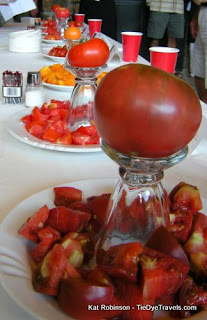 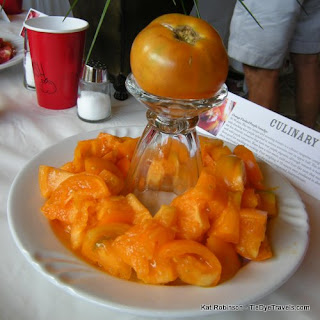 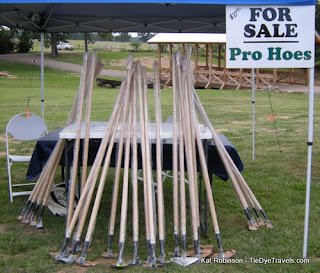 Vendors from Arkansas businesses and farms had set up here for Bountiful Arkansas Day. There was an information tent with several organizations offering advice on everything from finding organic locally-grown food in the area to tips on growing natural and legacy varieties of garden plants.

The folks from Post Winery had set up with their wines and juices and were offering grapevine starters for $15. 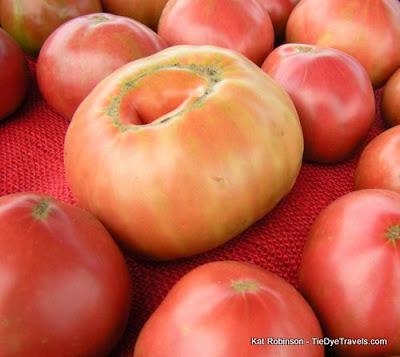 Bean Mountain Farms had out row after row of fresh herbs and plants to take home and start in their own gardens.

Some growers offered heritage varieties of produce, such as squash and eggplants and tomatoes and peaches. 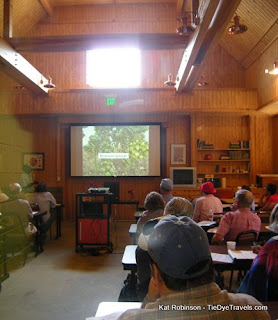 The day was rather hot, but that wasn’t keeping people away. Dozens of people were spread out in groups here and there, checking out the farmstead and the gardens. 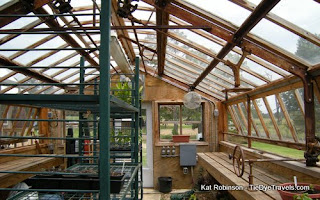 The gardens themselves were healthy and full of life. Watermelon varieties from all over Arkansas are already gaining bulk and growing big. Master gardener G.M. Greene told me that around here, melons get into the 40-60 pound range, and last summer some of the melons hit 70 pounds. He also mentioned that this year’s plantings were late because of all that wet weather we had in April and May.


I did check out the rows upon rows of tomato varietals while I was in that section of the garden. Looks like the start of a beautiful season.

In addition to the traditional gardens and melon patch, there’s also a vineyard and orchard in the Heritage Farmstead. There’s a lot more information about it that the WRI website can explain far better than I can! 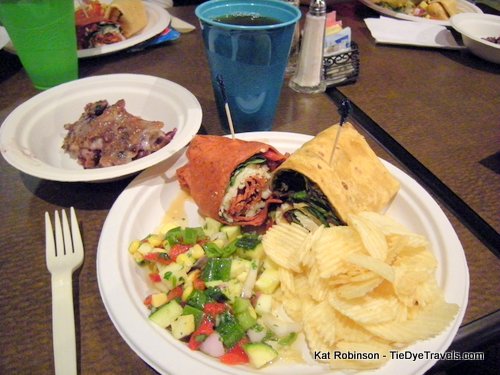 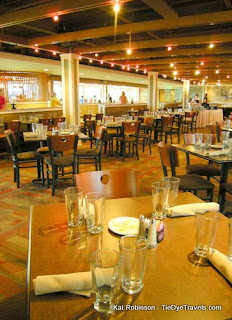 The temperature was rising, and it was time for lunch. Adena took me back over to the central part of the campus for lunch at the River Rock Grill. For the special event, a buffet lunch featuring all local foods was being offered -- BLT wraps featuring Petit Jean bacon, Caprese Salad wraps with heirloom tomatoes and local greens, a medley of fresh Arkansas grown vegetables, potato chips, iced tea, and an Arkansas berry bread pudding that was just divine. 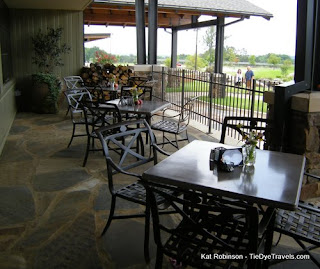 I also had the chance to meet Executive Chef Heather Welch. She talked with me about some of the demands the kitchen handles. For instance, in addition to the folks who came through for Bountiful Arkansas Day, there was another conference going on at the center. Add in that the restaurant is open to the public, you have a whole lot of people coming through. 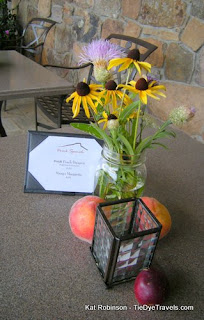 She mentioned that the turnaround for dinner had started the day before -- with the smoking of massive amounts of meat for the barbeque dinner that night. We also talked about the “regular” fare of the place, which is shown on the WRI website. Adena also mentioned some of the fabulous specials that Heather whips up… one day specials that suit a whim and that are also really, really good. I have to find my way up for a night with the hubster to enjoy this mountaintop jewel.

The River Rock Grill operates as a private club, which means it’s one place you can actually find a full bar on the mountain. Several people mentioned to me the peach daiquiri, which apparently is constructed over 24 hours. I passed this time, mostly because I was on assignment, but it sure was tempting. 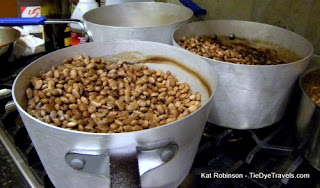 Of course, I couldn’t go all the way up the hill to cover food and Bountiful Arkansas Day without checking in on the Second Saturday Chefs Series that was underway. As the title implies, every second Saturday of the month, there’s a daylong workshop for those interested in learning about the preparation of a theme ingredient or the like. Fitting this particular occasion, participants were learning about preparing dishes with local produce. Chef John Leonardis was instructing a group of 35 people on the finer points of dishes like Watermelon Soup, Three Potato Salad, and Peach and Berry Cobbler. 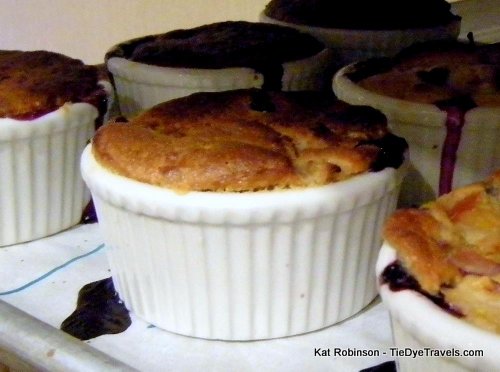 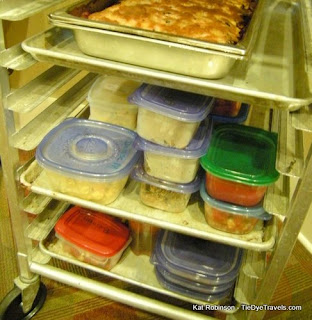 I like this set-up. Each participant had a work area that included a burner. They had all the tools they needed. Better than that, participants are encouraged to bring their own containers so they can take home what they cook. Lunch comes with the workshop, and then of course there’s the tasting of all that good food. And there’s a packet including all the recipes that goes home with folks. Not a bad deal. The price varies depending on the workshop, but seems to run in the $60-70 range, which is a pretty good deal and a lot less expensive than some of the “professional” cooking schools I have attended. 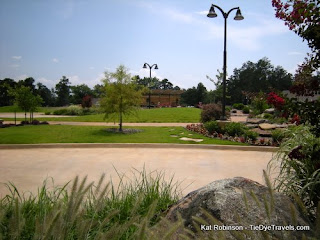 I found myself really wanting to stay longer, but scheduled demands being what they are I had to leave before the evening’s activities -- which included a lecture on eating within a 100-mile radius, an evening concert by Runaway Planet (on a stage built by UA students), and free beer from Diamond Bear Brewery. When I left out, there were close to 800 people who had gone through registration -- lots more than they had expected, but all the volunteers and UA staff that were running the event dealt with the hassles seamlessly. One of these days I have to get back up there, though… and maybe that’ll be a good day to talk about the Arkansas Rockefeller, and his big farm in the sky… well, close to it.