Preparing for the Big One. 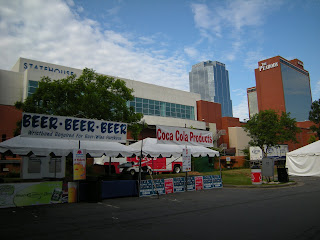 Spent an early morning at Riverfest. No, Arkansas' largest festival doesn't start until 6pm, but that doesn't mean there's not a whole lot of hustle and bustle going on. 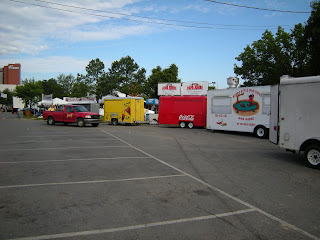 I slipped in (with permission, of course) at the La Harpe entrance by the River Market Pavilion. Riverfest workers, Little Rock Police and representatives of the media were working in concert with the bevy of beverage and produce trucks, food vendors, and whathaveyou for a conglomeration of busy-ness in what will be the 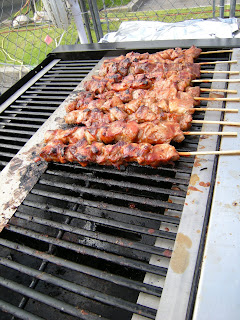 largest of the food court areas. I peeked in on the first vendor I noticed actually cooking, the folks at the Arkansas Philipine Association. They were already cooking up Chicken BBQ Kebabs, lovely bits of juicy chicken dripping with sauce and sweetness. Very tempting -- and I was even given the opportunity to venture close enough to risk salivation contamination. I restrained myself. 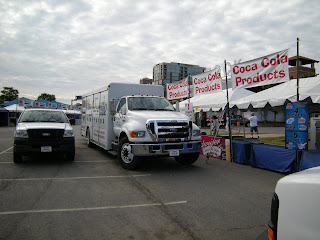 I noticed a plethora of Post Familie Vineyard vehicles, including the large wine cooler truck (as in, cools wine, not serves wine coolers). I appreciate that we have a great winery that can take part and participate so well.

This year, Post Familie is sponsoring a big Specialty 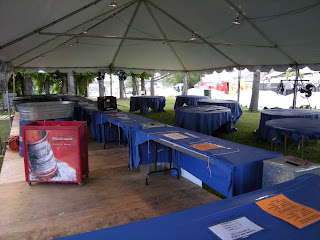 Beverage Garden near the foot of the Junction Bridge. I'm sure that's going to be a great landing spot for cool, quiet (well, maybe not quiet) reflection for folks, as well as a first-stop for those who enter from the North Little Rock side and make their way over on foot. 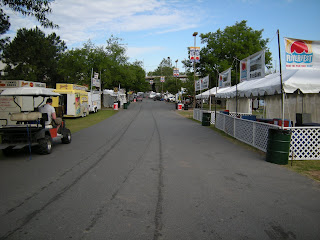 Further along, it's quieter. The first of the vendors are starting to poke their heads out and check the section of Riverfront Park along the KidZone. On the pavement up here (which, by the way, was the original Riverfest strip back when it was a tiny festival in the early 80s) there are all sorts of eats that will be available -- 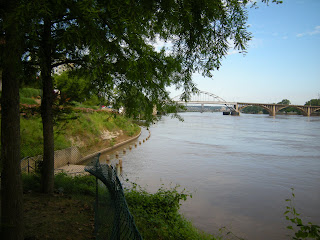 Oriental, gyro stands, and Fat Sam's -- which will soon open as a restaurant in the River Market Pavilion. For now, though, all is quiet.

The river is running high today, as it has been for a while. It's okay, though -- the river itself is cordoned off. Lots of fencing around 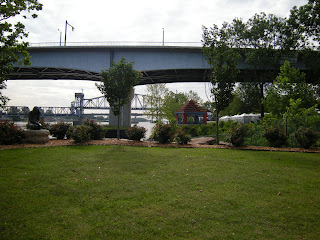 to keep folks from falling in -- but on the other hand, it's not so obtrusive as to keep anyone from enjoying its beauty or the views to the other side. A good precaution. 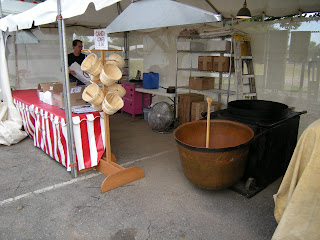 I wandered back up to the food area behind LaHarpe's Landing and found a kettle corn vendor setting up shop. Cola vendors were also bustling about the place. 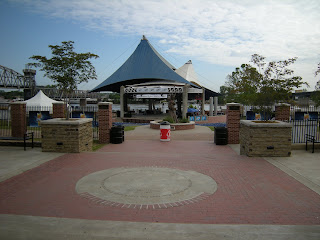 The Riverfest Amphitheater is being prepared for all the great acts that are coming this weekend. This is where one of my favorite 80s-90s bands, The B52s, are performing tonight. That excites me a lot -- I got to perform on that state with the Arkansas Youth Symphony as a teenager, and there's a bit of "squee factor" in it for me. 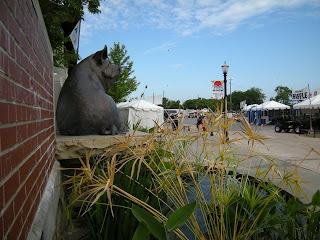 Old Tusk sits quietly, smiling his silent grin over the proceedings. Of all the hubbub around, this is the one quiet place I did find where no action was in the making and no craziness abounded. Just the gentle lap of water at his feet and the silent koi below. 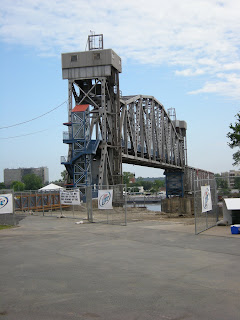 The area around the Junction Bridge is still being worked on. But it will be open this weekend for folks to pass by foot from one side of the river to the other. It'll be closed before the fireworks display Sunday afternoon -- but folks are going to be able to view from there. 1000 person limit, so if you want this eagle-eye perch, you'd better be ready. 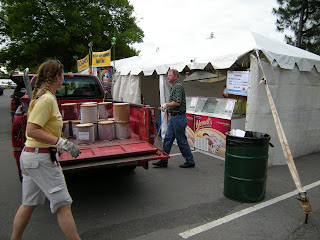 I did run into some of the friendly folks from Yarnell's Ice Cream as they set up one of their many booths along the way. This year's specialty Riverfest Flavor is Sunny Berry -- a flavor for a festival that should be light and breezy. Hopefully the festival itself will be the same.

About to head back out to get you more information on what's going on out there. Hope you're having a lovely day.
To purchase this article, email Kat Robinson at 5/22/2009 09:30:00 AM