Ode To The Old South. 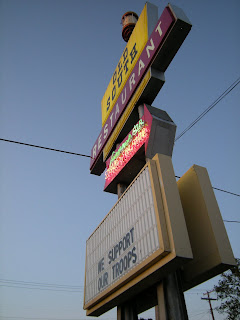 I wasn't born in Russellville, not even raised there. But in 1991 it became my second hometown, and remains so to this day.

Back then, I was a 17 year old college student, looking for something to do between dusk and dawn and somewhere to go other than Food 4 Less (which once threw me out for inverting the cans of SPAM on an aisle... what a troublemaker I was, eh?) when the city rolled up the sidewalks at 8pm. Back then, there was really only one choice, the Old South. 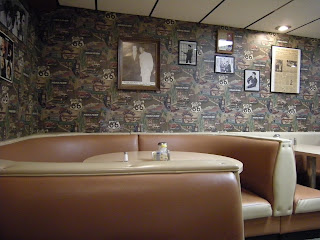 24 hours a day, you could go in and get yourself some reasonably cheap eats -- or, as many of us Tech alumni recall, spread yourself out in a big round booth with homework and coursework and whatever needed to be worked on. The only caveat was that you had to order food. My favorite -- heck, my most affordable option, to tell you the truth, was the honey bun -- which was warmed on a plate in the microwave and which cost the grand sum of 95 cents. 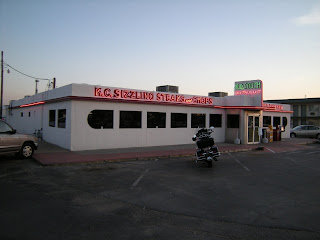 Hard to think that half my life has passed since those days. Also hard to think that the old restaurant would even still be standing, let alone serving famous steaks and fried chicken. But that's part of the charm of the place -- the ability to rise like a phoenix from figurative ashes to retain not only a place in the memory but also a place in our dinnertime lexicon. 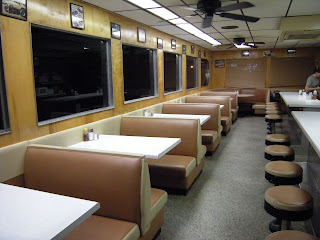 But some of the finer points I failed to digest in my college days were some of the more impressive items on the menu. And that menu hasn't changed a whole lot -- except now, instead of being inside a binder, it's laminated with the story of what happened in those years after I left college.

Well, no, it's not a tribute to me, but to the folks who worked hard to make sure the Old South stayed in business. Because in 1999, the Old South was named to the National Historic Register. Isn't that something?

Story goes like this. Back in 1947, Russellville businessman Woody Mays thought it might be a good idea for people headed from Ft. Smith to points east and vice versa to have a place to stop and get a good bite to eat. He got together with William Snell, who worked with National Glass and Manufacturing Co. in Ft. Smith and who designed the Art Deco diner for him. Pretty soon, word got out that it was a swell place to stop for a bite along the route. 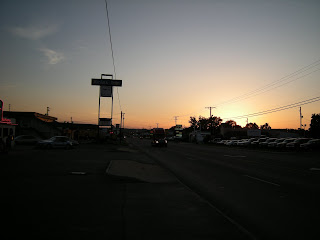 Of course, Interstate 40 put a kibosh on the best part of business, but the restaurant managed to keep going. That, and of course us Tech folks with our backpacks full of paper (what a concept -- not a laptop in sight those days!) and our little opened packets of sugar and artificial sweetener spread out like confetti around our always-full coffee cups as we pulled one all-nighter after another in the effort to survive college. 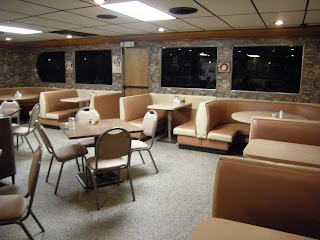 Things change, as they are wont to do. Other 24 hour eateries opened, first the Waffle House (that was actually before my time up there), then the all-night truck plazas like Pilot and Flying J and then the International House of Pancakes. Pretty soon those college kids were spending more time in their state-of-the-art dorms and apartments built during Tech's boom in the late 90s, and the Old South stopped being a 24 hour dining establishment.

But you can still find lots of those diner delights and distractions between the hours of 6 a.m. and 9 p.m., seven days a week. 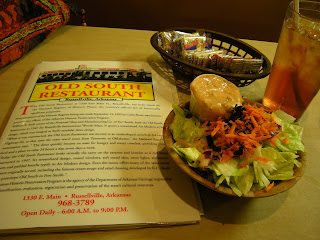 For old time's sake, I dropped by to pick up a bite to eat and a few memories recently. I almost went in for breakfast, but as it was already 8 p.m. I decided to go with convention and eat dinner instead. After ordering and while knoshing on the carrot-heavy salad that came with my dinner (along with the heaping container of 1000 Island dressing and the obligatory rack of crackers prefered in most old-time Arkansas dining establishments), I looked through the menu.

That "world famous" K.C. Dinner Steak, a seven ounce top sirloin with sautéed onions and fixings, runs $7.50. The breakfast special, two eggs any style with oatmeal, grits, or hash browns and a choice of toast, biscuit, or English muffin with bacon, sausage, or Petit Jean ham is $4.27. And for those truly Arkansawyer dishes, chicken livers with cream style gravy run $6.25 and fried "Arkansas steak" (Petit Jean bologna on bread with pickles, onions, ketsup and lettuce) is $2.95. 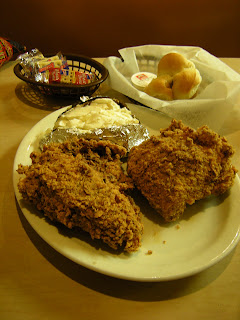 I almost regretted my order when I saw one of the Chef Salads go by. I'd forgotten how big those things were -- like half a head's worth of shredded lettuce and toppings in a 12" bowl, served with dressing and once again those crackers for $5.25.

Nope, I'd gone for the fried chicken (¼ or ½ Southern fried chicken with potato, soup or salad, and bread for $6.25/8.95), the smell of which hung in the air long before it made it to my table. There's just something about that pan-fried chicken that just huddles in your memory and tickles the ganglia. 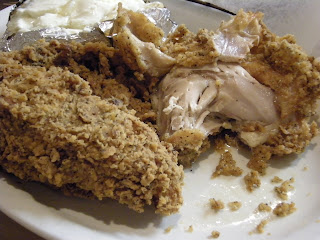 Which is kinda unfortunate, since for those with grease issues it's just too much. The skin is heavy with the batter, and the chicken inside is very very very moist and even peppery in bits. But I found that the fowl needed to be drained a bit more than how it was delivered to me. I made do. 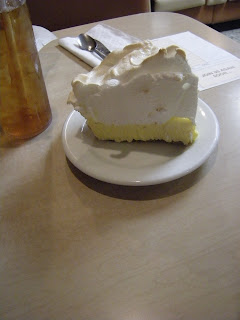 And I rewarded myself with a big old slice of Lemon Ice Box Pie, definately the star of my meal. Worth every bite of creamy tart goodness.

Yeah, the Old South is much more upscale these days. There aren't any duct taped holes in the upholstery, there's fresh Route 66 artwork and wallpaper on the walls, and the restaurant has banished smokers to outside. But there are some bits of the experience that remain the same. It still very much feels like one of those college-days haunts that you recall with fondness and a little mist in the eyes. 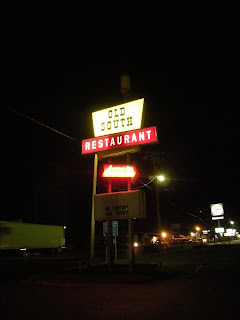