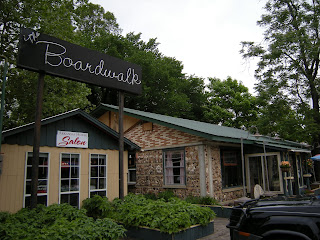 Newton County has some fantastic finds and special attractions, such as elk watching in Boxley Valley and floating the Buffalo National River. A local restaurant is another treasure to seek out – Arkansas’ only full-organic restaurant.

Arkansas has some fine restaurants – some that fall into haute cuisine, some that dwell in the comfort food region, some that have specialties that rival those in large cities. Many have staples like farm-raised catfish, greens, and fried pies. Some even dabble in new directions with slow-movement foods, produce from local farms, and organics.

But as far as I’ve been able to tell, there’s just one all-organic restaurant in Arkansas. And you won’t find it in Little Rock, Pulaski County, or even Central Arkansas. In fact, it’s a three hour drive from my Little Rock home to get there. But it sure is worth it.

The Boardwalk Café overlooks the Little Buffalo River in Jasper. It’s part of a block-long complex that includes The Arkansas House – a rather nifty bed and breakfast, a hair salon that specializes in pampering guests, and the only health food store in all of Newton County. Joseph and Janet Morgan started the café three years ago, and it’s a great place to stop on any Scenic Highway Seven trip.

The Morgans are doing something difficult in what might seem a rather unlikely place – offering a completely organic menu in a town that’s not easy to reach by 18-wheeler. They’re doing that by reaching out to area farmers and offering those farmers a chance to sell their produce locally, where it can be enjoyed at the peak of freshness. Most of the meat and just about all of the produce the Morgans serve, comes from 35 area farmers. The beef they cook up comes from their own organic farm, and most of the spices they use come from flower and herb beds on the property.

I’ve been by several times… and being the stealth food writer that I am, usually enjoy the atmosphere and take my pictures without comment, and leave with the contentment of a good meal. When I was pregnant, it was an especially great stop – I had developed an allergy to corn syrup (which has thankfully left me!) and was excited by the idea of a restaurant where I could order something other than iced tea from the beverage menu. Each time I have found a similar experience – a warm atmosphere, clean restrooms, lovely artwork from local artists available for purchase, and unique and delightful items of culinary delight to savor. 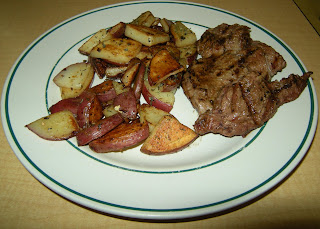 Such as the Flame Broiled Buffalo Steak ($23), a tender New York strip from free range American buffalo raised on nearby Ratchford Farms. It’s cooked medium rare and served up with potatoes, salad, and soup. The meat is similar to a beef steak, and not quite as gamey as I expected. It’s served up very lightly spiced, not at all salty, so what you taste is the meat itself. I like that. The Fresh Dug Potatoes Grilled In Olive Oil and Spices (comes with the meal or $3 a la carte) are perfectly done, home fries that are meant to be savored and that don’t have that heavy cling of grease to them. 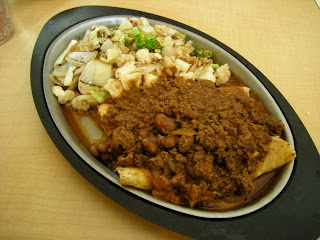 One of the more popular house specialties, the Elk Chili over Cheese Enchiladas ($15) is another guilty pleasure. A normally pedestrian dish such as enchiladas is elevated to an entirely different level when the enchiladas are good farm-fresh organic white cheese wrapped in a sprout grain tortilla and covered with a hearty but 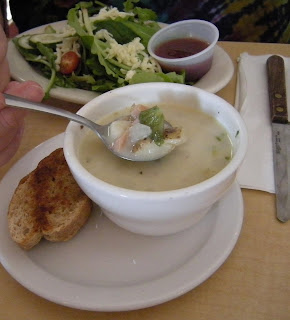 not overwhelming chili. Once again, the salt is underdone on the dish – but that’s just fine, welcome even. It’s served up with a vegetable and rice stir fry full of cauliflower and carrots, and with a basket of organic tortilla chips and a housemade tomato and cilantro salsa that pairs wonderfully.
Salads are made with fresh greens plucked the same week from local greenhouses. The New England Clam Chowder sometimes offered is a light broth with whopping chunks of skin-on potatoes and fresh clams so pink you might mistake them for salmon. 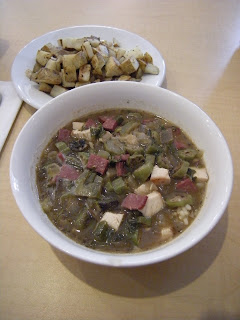 A good hearty favorite for a cold day or a long ride (Jasper is a popular destination for motorcycle enthusiasts) is the Chicken, Elk and Okra Gumbo ($9). Now, I have to admit – I fall on the gumbo file side of the gumbo debate – usually I can’t really appreciate an okra gumbo. But here it is done well. Chunks of elk sausage and chicken are sautéed up with okra and onion in Cajun spices and served over rice. It’s a nice, warm, savory way to warm up.

And I can’t help but mention the Black Walnut Pie ($5 a slice or $24 for a whole pie). I’ve dropped in before 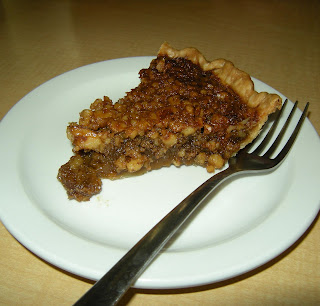 just for that pie – that burnished sweet warm treat that recalls cool autumn days in front of a stone hearth, shelling walnuts and thinking about Thanksgiving pie. Unclouded by ice cream or whipped cream or any other embellishment, the meaty English and Black Walnuts within balance well with the mix of cane syrup and sorghum molasses. It’s a masterpiece of comfort food.

Now, you might look at the prices and reconsider the “comfort” of such a meal. While not as pricey as many urban eateries, the menu is a bit more expensive than the average casual roadfood restaurant. But the Morgans have taken a heck of a chance, reviving a restaurant in a spot once occupied by the decades-old Dairy Diner, and creating an oasis of natural, organic food while utilizing the rich natural resource in Newton County’s farming community. Such things don’t come cheaply.

The Morgans are doing something else, too – they’re trying to save the environment while serving up good food. They use to-go containers made from biodegradable recycled materials. Their salad containers are made of corn. They use Seventh Generation toilet paper and paper towels. They only utilize all-natural cleaning supplies – which don’t leave a toxic residue. 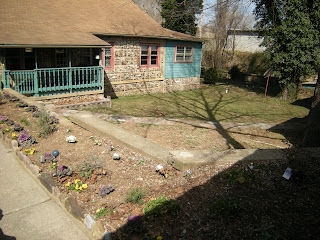 On the other side of things – they recycle cans, newspaper, and plastic And this year they’re planning to re-roof the buildings in the complex with solar shingles and replace the traditional outdoor lighting with solar-panel lights.

Of course, if you want to get technical, not everything is organic – the restaurant does sell Coke and Pepsi products alongside the joyful Blue Sky sodas, organic coffees and teas, Goji shots and fruit juice. It’s not 100% local, either – clams, shrimp, and crabmeat are flown in from elsewhere. But it’s an incredibly good attempt, and one not to be passed up when you’re in the area.

Email ThisBlogThis!Share to TwitterShare to FacebookShare to Pinterest
Labels: Jasper