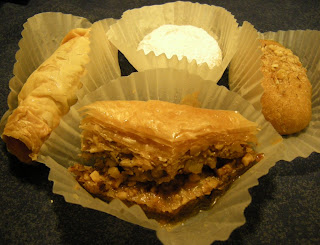 Behind the scenes at the Annunciation Greek Orthodox Church -- the scene of this weekend's 25th Annual Greek Food Festival.

It's a big tradition here in Little Rock... really, a BIG tradition that started out in a small way back in 1985 and has continued to grow and grow and grow. Now it's the grand-daddy of all Arkansas food festivals, and it has a lot that the other festivals lack.

For one thing, it's not just about the food. It's about celebrating culture -- not just of Greece but also of the Middle East. I can remember a time in my life where it was the only place -- the only place -- where I could obtain a gyro and baklava. Sure, today we have restaurants and grocery stores and the Internet and all sorts of other ways to get these sorts of items, but back then it was quite different.

The folks at the Annunciation Greek Orthodox Church didn't just throw a festival on their parking lot back then. They also set up at Riverfest (which is a week later now -- whew!) and at Fort Smith's Riverfest as well. But as the Greek Food Fest grew, it became harder and harder to manage all of that. Which is just as well, because this event is something else.

Dancers. Costumes. Coffee (oh, I could go ON about the coffee). An Old World market. The pastries. The lamb. The neat things for the kids. It's been a big thing to me since my early teenage years, and I was so glad to get the chance to go behind the scenes and sneak a peak at what was going on. 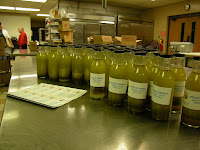 When I entered the kitchen, I encountered a group of gentlemen in the process of packing up the final bottles of Pete's Famous Greek Salad Dressing. The lovely green essence of Greek-dom is a highly-sought commodity in Little Rock kitchens. Packaging of this sort has been going on for months. 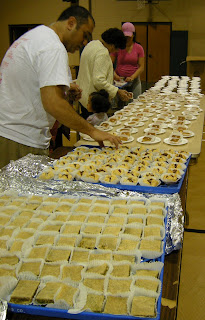 Over in the gymnasium, a couple and their young daughter had already arrived to start assembling the Jerusalem pastry plates -- lovely things like harisa and kataifi that are a break from the baklava and Greek pastries we have all grown to love and adore.

As I watched, they set up a rather well organized assembly line to place the pastries on plates and then wrapped and sealed them in plastic before adding that all important 25th anniversary sticker.

On one wall, there were rows and rows of plastic boxes filled to the brim with already packaged baklava, sourota, and other pastries. Easily more there than you could eat in a 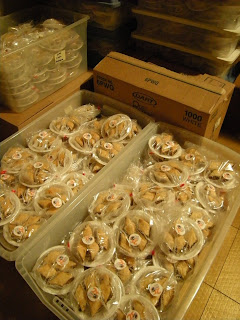 lifetime. Hard to believe looking at that monstrous wall of pastry, but it will all be gone come Sunday night.

That's right -- every bit of it. Looking down into the tubs and seeing the amazing amount of food that's been prepared by volunteers over a series of months, it's hard to imagine that come Sunday evening the festival will run out of almost everything.

No joke. That's not to say they're underprepared -- it's a testament to the hard work of those who attend this church and who want to give back to this community. 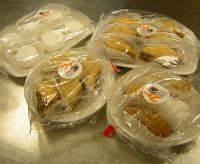 Community, after all, is what it's all about. Christina Martin met me at the church for my tour, and she told me about the efforts that happen each and every year to make the festival happen -- and why it happens.

“People come three days in a row and keep coming back,. I think that really says a lot," says Martin. "It’s a family atmosphere, it’s safe, everything is kid-friendly, there’s no alcohol served…" 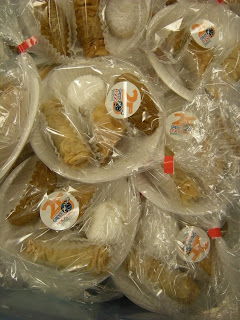 Not a lot of festivals can say that -- certainly not Riverfest coming up the following weekend, which will feature dozens of musical acts and crowds of tens of thousands. This festival is all about community.

“Se are grateful the community lets us do this," Martin shares. "Everything we bring in goes back to local charities.” 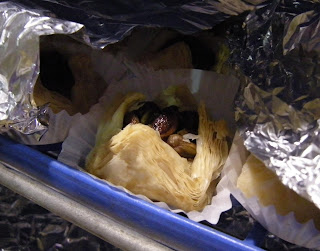 That's right. The church works with seven charities each year -- including The Centers For Youth and Families and Easter Seals. The other five charities are chosen based on need and timeliness each year -- this year those charities are CARTI, Love*Truth*Care Inc., Miracle League, Youth Home, and the March of Dimes. That's right -- this isn't small change. It's a force of nature that brings in hundreds of thousands of dollars to community causes each year. 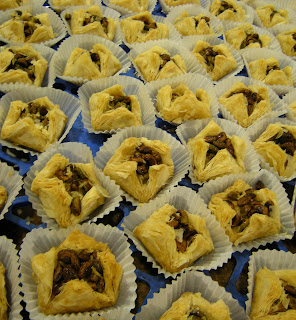 What makes this amazing is that it's all volunteer-powered. There are no companies coming in to run things, no pre-packaged generic foods. Everything you see out there was made by someone's grandmother or sister or uncle. There's no middleman. Martin mentioned that ordering the ingredients to make the food was an incredible task, and I could see that -- with all those rows of cans and bags of flour and sundries all ready to go for this weekend. 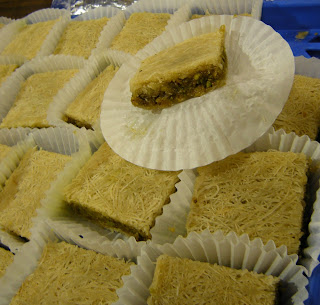 Volunteers start in March putting together things like the baklava and the spanikopita -- which can be frozen. Every evening in-between then and the festival there are people at the church, working to cook, divide, and package things up.

And after this coming Sunday, it will all be a memory... until next year, of course.

Yes, there are new things this year -- like the new lamb sandwich on pita and the Middle Eastern pastries. The coffeeshop is being expanded this year and will take a good deal of indoor space (oh, but I am ALL about that!). On the non-food front, this year's special guest artist is Vivian Karayiannis, an expert in iconography. You know, like all those neat haloed depictions of the Madonna and Child that have been popular in churches since the Dark Ages? I am especially looking forward to meeting her.

And there will be dancing -- some by professional troupes, some by students, some even brought together at the spur of the moment -- average people like you and me swayed by the music and the food and the atmosphere.

Arkansas is fortunate to have a great deal of free festivals. This is one you don't want to miss. If you're daunted by the traffic, never fear -- trolleys run every 10 minutes from Ashbury Methodist Church and Pulaski Academy down the street. There's even a drive-through for those who don't have time to partake of the festivities but can't miss out on all that great food.