Some things change, some BBQ remains the same, but that's a good thing. 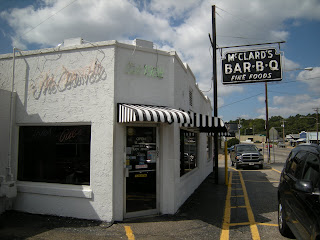 Restaurants come and go. They may last a week or a decade. A few manage to eek out a couple of generations. But one institution in Hot Springs has been going strong for 80 years.

Of course, that'd be McClard's. 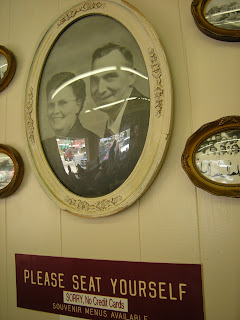 To be completely honest, if you took a trip back in time you wouldn't find this restaurant sitting here in 1928. Back then the original McClards, Alex and Gladys, owned the Westside Court Motel a few blocks down Albert Pike (though it wasn't called Albert Pike then, but I digress). They'd take on lodgers -- and they had one who stayed with them two months. But when it came time to settle the bill, he wasn't able to come up with that $10 he owed. Instead, he offered them the recipe for what he called "the best barbeque in the world." They took him up on it, called it a fair trade, and let him go. 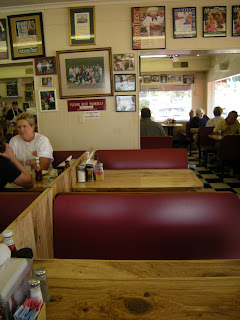 Turns out, that was a momentous decision. The happy couple reopened their motel as Westside BBQ, and they smoked their meat of choice -- goat!

No, goat's not on the menu today.

The family moved the operation to its present day whitewashed building in 1942, where it operated with carhops who'd come out and take your order when you honked the horn. You could even drive up and tune in to the jukebox with your car radio. Waitresses would bring out drinks and ribs and fixins on a tray that attached to your window. 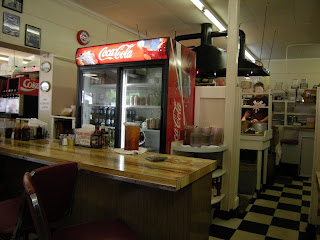 Things change, of course. By the time I entered the picture as a babe-in-arms in the early 70s, there was a dining room and a long line of barstools across the front at a lunch counter. My folks would take me and we'd find ourselves a booth and munch down on a plate of tamales or a rack of pork ribs together.

We all age, don't we? And sometimes memories fade into the black, only to come back with a scent on the wind or a hearty bite of something between the teeth. Strangely enough, it wasn't the call of barbeque that called me back to my past on my recent visit.

I was traveling with a group of new companions who weren't familiar with Hot Springs recently. We dropped in on a Wednesday afternoon with appetites and curiosity. It felt sorta like introducing old friends to new ones. 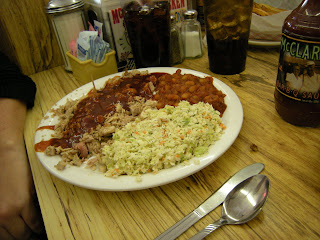 We sat down and perused the menus. One of my tablemates, a confessed vegetarian (bless her heart) decided she'd give a little and try some of the pulled pork with her side orders. It's the same dish Mr. Clinton gets when he comes to town -- pork, beans, and slaw -- though Mr. Clinton usually forgoes the bread since he's watching his weight. The Encyclopedia of Arkansas records the former President as the only person the menu has ever changed for, and the only person the restaurant will accept a reservation from. Well, I can't fault them there. 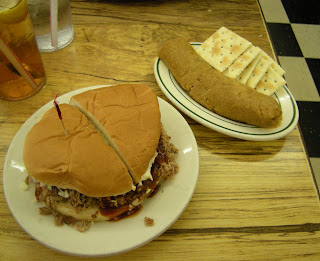 I decided on an old favorite pairing... and went for a barbecue beef sandwich, tamale, and chocolate malt. I know, I know, I can't eat the tamales -- but I can gaze fondly on them, and at $2.90 each it's worth the memory. Besides, there were plenty for me to share it with and experience it vicariously. 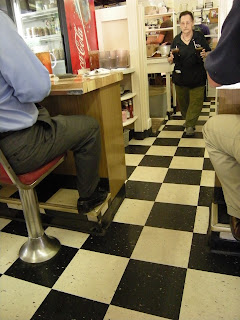 McClard's tamales aren't like anything you'd ever know anywhere else -- they're particularly of an Arkansas breed. No corn sheaths here -- just a core of shredded pork, within a hand-formed tube of cornmeal mash, served with saltine crackers. Yeah, some folks eat them with a fork, but the locals use the crackers to scoop it up, and some of the oldtimers even still wash it down with buttermilk.

I swear, I believe there's only been one woman who's waited on me all those years. Oh, I mean, from time to time one of the boys behind the counter would take my order, but 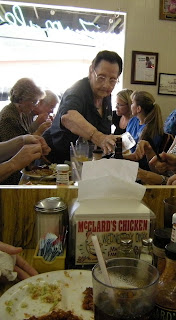 for service at a table it's always been Ms. Wyona. She's been there about as long as my mom's been alive, and she's still amazing. She can take a table full of orders without a notepad, remember it all, get everything right -- and she's still doing it today. She's at least 80 and still going strong.

She came over and refilled my iced tea and slid a couple of plates on the table in front of me -- the aforementioned tamales and the chopped beef sandwich served the way we do it in our state -- at least, those of us from here who know how these things are done. Beef is chopped after it's smoked, then layered onto a fresh bun with mayo, chopped cabbage, and sauce. That cabbage and mayo combination is usually replicated elsewhere as slaw, 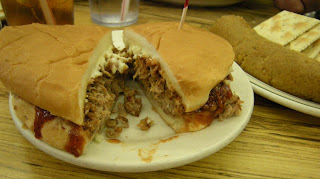 but since the slaw here is good enough to eat by itself this will do. It's cut in half -- has to be, since handling more than a half at a time is begging for disaster. As it is, a napkin from the box at the inside end of the table is a prerequisite. You just make sure you pick up the napkin before you start chowing down on that sandwich. 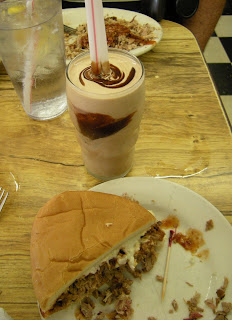 Moments later, Ms. Wyona had brought out my chocolate malt. I know people who don't order malts because they're "chalky." I doubt they've ever tried the malt at McClard's. No, it's not big -- and anyone who tries to pressure you into getting one of those 32 ounce monstrosities at some place or another doesn't know what they're talking about. Better than that, they're not full of air -- so what you get in your glass is just creamy rich milk, ice cream, chocolate, and malting -- smooth and gentle and the perfect bit of calm to ease your taste buds out of shock. Because, though McClard's sauce isn't hot on the way down, a few minutes after you start to feed you'll notice a sharp wang of spice building up. Hence the popularity of dairy items on the menu (buttermilk, milk, chocolate milk, ice cream) and the need for beer (a bottle will run you around $3). 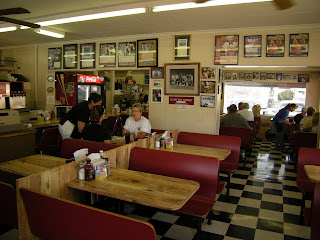 It's hard not to go into a food coma with something as good as all that. I watched with a bit of disengagement as Ms. Wyona brought out plate after plate for others -- rib plates that were a feast for the eyes with those ruddy red smoke stained bones amid a pile of fries; pork and beef plates with their triangles of light green cole slaw and deep red beans (the beans lean far further towards the Mexican side than the pork-n-bean side), glasses of Coke and plates of tamales. Me? My tongue was dancing with the kind juxtaposition of cool cabbage, creamy mayo, spicy sauce, and that deep smoked pink ringed beef. Between the sandwich and the perfection of the chocolate malt, I was whipped away in bliss.

And apparently, so were my traveling companions. 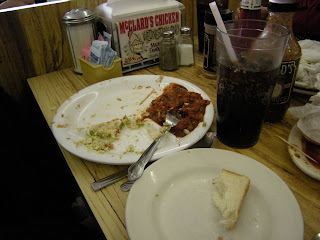 Remember the lady I mentioned was a self-confessed vegetarian? This is her plate, after the hunger was satisfied. No, I was in no position to help her, but she did mighty fine by herself -- so fine, in fact, that we conspired to pick up a dessert, too. And what dessert cries out "Arkansas" more than cobbler? 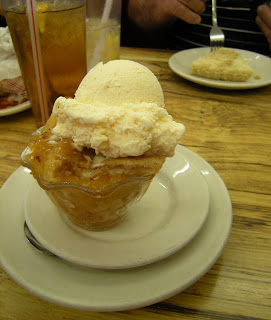 She ordered the blackberry, I ordered the peach. One of our other dining companions ordered the Key Lime Pie and declared it good -- high praise from someone who's likely tasted Key Limes in the Keys. I was all about some peach cobbler -- lightly spiced with layers of crumbly dough in-between. Heavenly.

The current co-owner, Scott McClard, dropped by to talk with the folks who had congregated in our area, and to answer questions. He's fourth generation, and his girls might one day join in the 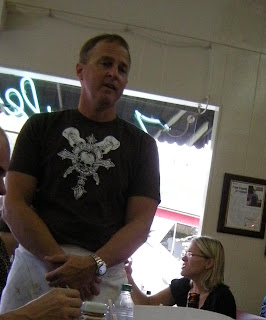 business, too. Of course, they're in their teen years, so there's plenty of time.

If you go, know a couple of things. Chicken is only served on Wednesday -- otherwise, it's beef or pork. Shake on a little of the McClard's dry seasoning on everything for a try -- it's a great little extra kick. Don't bother coming down on Sunday or Monday -- no one will be there. And wash your hands -- the restrooms are around the back on the east side, and they're clean and neat. 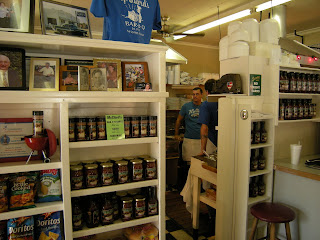