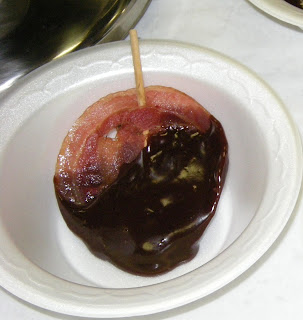 The Arkansas State Fair holds a special place in my heart. When I was a little girl, the Fair always seemed to fall on my birthday (October 4th), and many years I celebrated on the midway, weaving my way from ride to ride on one of the wristband nights, trying to find the most outrageous things to do, see, and eat.

I suspect there's a little girl out there somewhere who's looking forward to trying the neat new things at this year's Fair... but there are some things that scare even me.

Just got a preview of what food you'll find at the Fair this year from Tom Lyons. He's the food dude, the Director of Food Services at the Arkansas State Fair. He's the man in the know about what vendors will be selling. And he has big news.

"One of the things that is new this year is the Pig Licker," Lyons told me.

Pig Licker. That's not the most polite of names. In fact, I'm a little scared. Turns out, I should be. 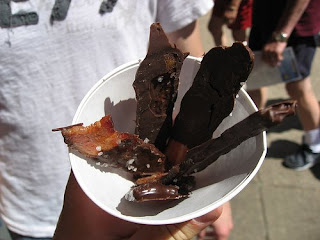 "What it is, is chocolate dipped bacon. It was new this year at the Minnesota State Fair. Basically, it's bacon you dip in chocolate, like chocolate covered strawberries."

So I had to go do some research. According to an article in the Minneapolis-St. Paul Star Tribune, Pig Lickers are strips of bacon covered in dark chocolate and sprinkled with sea salt. 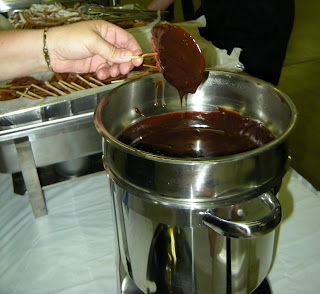 The Arkansas State Fair version is a bit different. Instead of the Magic Shell-type chocolate on strips, bacon rounds are dipped in melted chocolate. I got to see a special preview of the Fair the second week of September, and most folks took one of the lollipop type confections. However, when I went around and looked at different tables, I noticed a lot of people talking about them -- but not a whole lot of people trying them. The general consensus from those who tried Pig Lickers -- it was either an instant love or an instant hate. There was really no in-between.

I regret that my allergies prevent me from sampling such an, um, epicurean delight. Many of my friends talk about bacon being the "candy bar of meat." I remember bacon being one of my fondest foods as a child and a teenager. I used to love the BTT -- forget the lettuce, just a couple of fresh thick slices of homegrown Arkansas 'maters, a couple of super crispy slices of bacon, a dash of Miracle Whip all sandwiched between a couple of slices of toasted slices of white bread. You had to either eat it over the sink or wrap it in a couple of paper towels, but oh -- what a summertime memory. 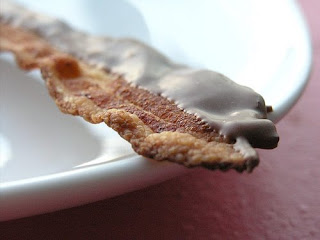 Still, the idea of marrying bacon and chocolate doesn't seem so far-fetched. After all, many of us enjoy chocolate with nuts or a good salty trail mix with chocolate chips. It's the salt factor. Any good cook knows the best way to make a sweet food seem even sweeter is to add a little salt to it. Marrying salty smoke-cured bacon and sea salt to rich, thick dark chocolate could be a no-brainer.

But how popular will it be? From what I read in an Associated Press article on Yahoo, the folks from Famous Dave's that came up with this creation weren't sure how it'd come across.

I'm sure there's far more to the story, and I'll be checking out more in the coming days.

Back here in Arkansas, Tom Lyons says there's more to talk about. "Thing is about State Fairs, the uniqueness of them -- people will try things they'd never try at a restaurant."