The Blue Plate Cafe in downtown Memphis is just as good as the original. 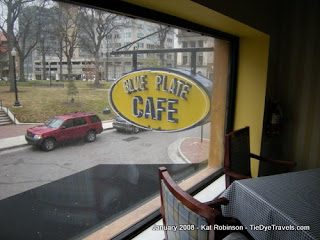 The Blue Plate Cafe has been a popular stop on Poplar Avenue in Memphis for decades. The tiny lot is almost always packed, there's usually a bit of a line, and it's all worth it. 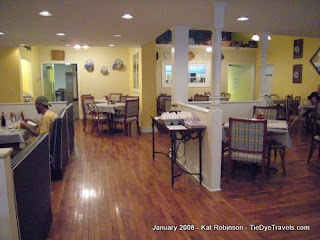 prices on blue gingham topped tables, packed in tight. It's not uncommon for parties to be sat together at a big table when there are far more diners than tables.

For those who don't want the crowds, though, there's a new option -- the Blue Plate Cafe, downtown.

The restaurant has been open for almost three years now, but is still a surprise to out-of-towners who have become acccoustomed to the long drive out west. It's tucked into three stories of a building just east of Court Square.

Besides the location, nothing has changed. The service is still excellent, the menu identical, and the atmosphere jovial. What is different is the space. 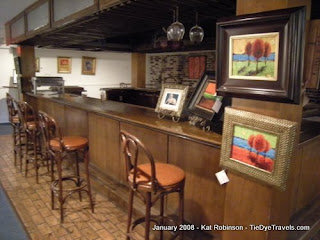 The cafe itself takes up two floors in the building -- a main common area on the ground floor that's decorated in the same bright yellow and white as the original, complete with blue china plates on the walls. Upstairs, more secluded dining is offered. Downstairs in the basement, artwork 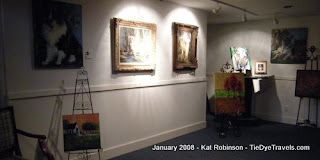 lines the walls in a gallery around an antique barstead. These paintings are all for sale, and local artists benefit from your purchases.

But folks don't usually come here for the art. They come for meals sure to please, with lots of dining options.

I walked over to the restaurant on a windy Tuesday morning in January to partake of the goodness. I was concerned -- many restaurants that open second locations don't put the time and effort into getting it right. That's not the case here. I was greeted with a smile as soon as I walked through the door. There was no waiting -- in fact, just three of the tables on the main floor were occupied. 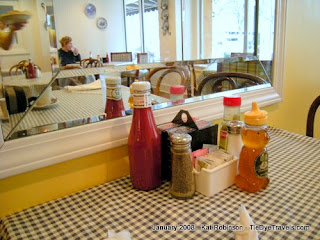 I was quickly seated and presented with a menu -- still on the traditional newsprint popular at the old restaurant. In fact, I couldn't tell if this was printed separately from the other... it appears to be identical. The menu is packed full of favorites, including several types of pancakes and omelets, fruit offerings, and waffles. And that's just breakfast -- lunch on the opposite page is just as impressive. 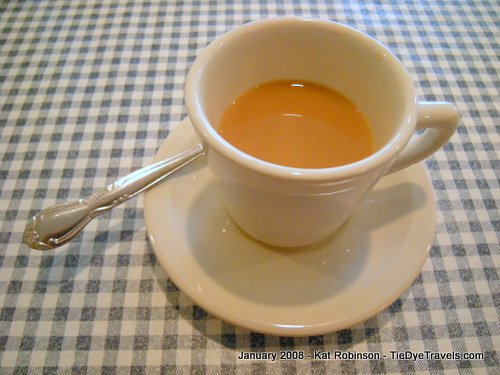 While I decided, an attentive waitress brought me coffee and cream and a large glass of water. She was patient as I carefully scanned down the menu, trying to figure out what I wanted. I decided on the Huervos Rancheros ($7.59). She quickly returned with a plate of biscuits and just as quickly disappeared. 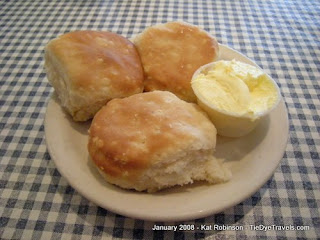 The full breakfasts at the Blue Plate Cafe come with biscuits with sawmill gravy and your choice of hash browns, grits, or three buttermilk pancakes. I passed up on the gravy to savor an epicurean delight. The biscuits are fresh-made, on the floury side. They're served hot and soft with a big side of 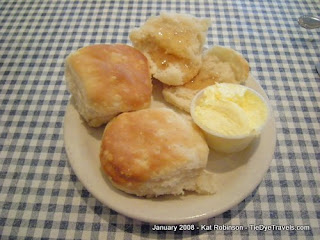 margarine. Like many Southern girls, I eat my biscuits with honey -- and there's honey provided for those who indulge in such a delicacy. There's a honey bear on every table, along with salt and pepper, ketchup, jellies, sweeteners, and hot peppers in oil. If there's a condiment lacking, you can ask for it. There have been very few requests I've heard at either restaurant that haven't been fulfilled. 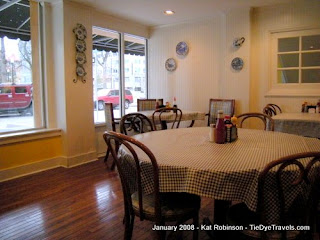 Three people came in to fill the table next to mine. They ordered variations on fruit and oatmeal. The oatmeal ($1.99) is homemade, not instant, and comes with butter and brown sugar (and milk, too, on request). For an additional 55 cents, you can add raisins, nuts, or any of several other options. The fresh fruit bowl is humongous, and includes a fine selecton of strawberries, grapes, and sliced banana. It also comes in a more moderately sized cup portion, which still isn't stingy. 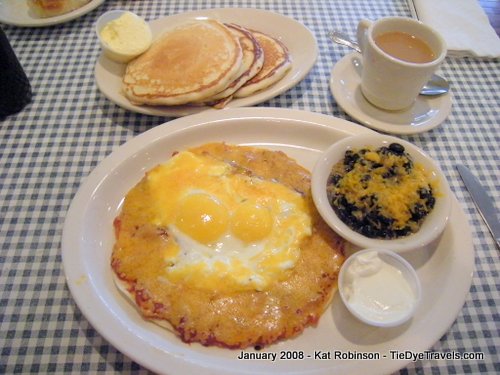 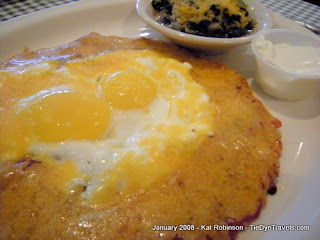 My food came out, and I found myself at a loss for where to put it all. The Huervos Rancheros itself is a large, tasty dish -- a crispy tortilla topped with salsa, Cheddar cheese, and two sunny-side up eggs. It's served with sour cream and a bowl of black beans coated in Cheddar cheese. Surprisingly, all of the liquid on top of the tortilla did little to soften it. The tortilla added a crunch to the firm eggs, the mild salsa, and the delicate cheese. I am not a fan of runny yolks, but here they make the perfect protein-laden accompaniment to the dish. The beans were soft but not disintegrating, and the cheese made a nice topper. 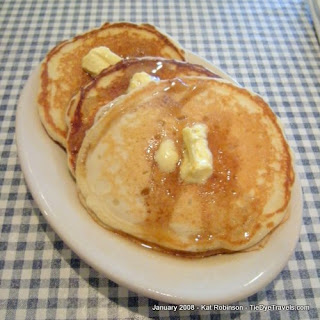 I had ordered the pancakes as my choice, and was greeted with three very fluffy rounds the size of my splayed out hands. They run 1/4" to 1/3" inch thick, and suck up the hot syrup provided in a glass bottle. They are a meal in themselves, and if that's all you're wanting you can have them for $3.29.

Throughout my meal, my waitress came back constantly, warming my coffee and asking me questions. She even provided me with a weather forecast for the day and ideas on where to go in the downtown area. 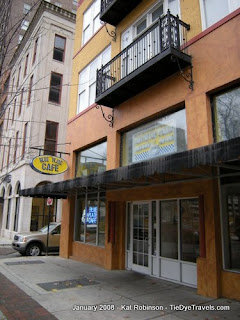 Sadly, I could not do justice to it all. After the two honey-laden biscuits and the Huervos Rancheros, I decided the pancakes would travel back to my hotel room with me for later consumption. I found upon standing that the mind was willing but the body weak, and I almost needed assistance to make my way to the register.

The Blue Plate Cafe downtown is open at 8am, seven days a week. It's a couple doors down from the Main Street Trolley, on the other side from Springhill Suites, at 113 South Court. Breakfast is served all day, and you can find lunch items after 11am. Can't tell you about those -- I always order one of the tremendous, well cooked breakfasts. You can reach the restaurant by phone at (901) 523-2050.

UPDATE 9-7-17. You can now check out this Facebook page for this location of the Blue Plate Cafe, which is still going strong. 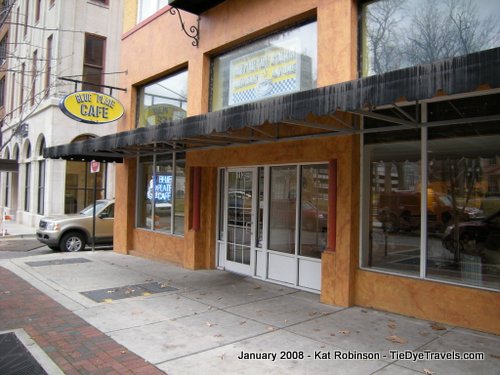 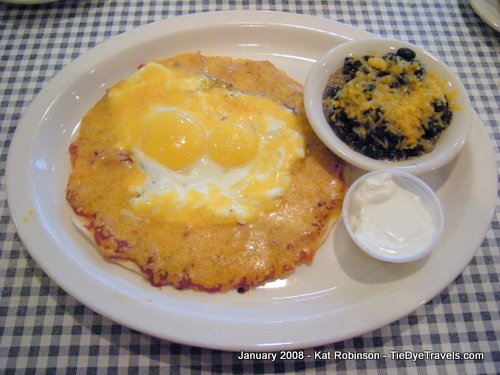 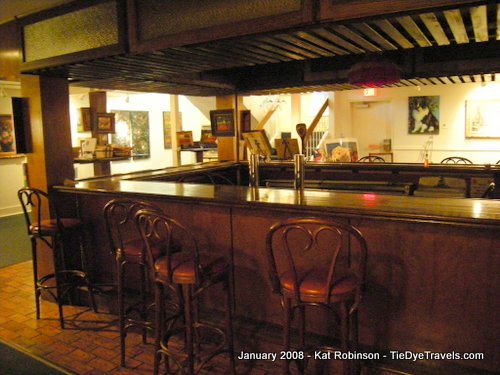 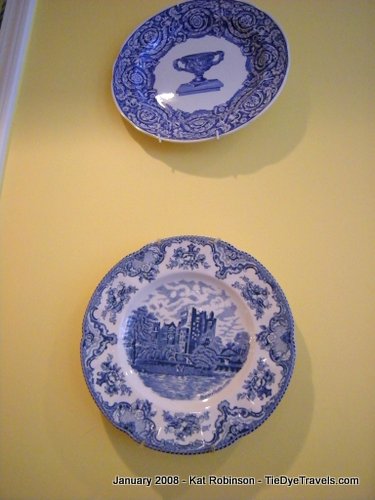