Dinner For The Indecisive Can Be Found At Morrilton Drive Inn Restaurant. 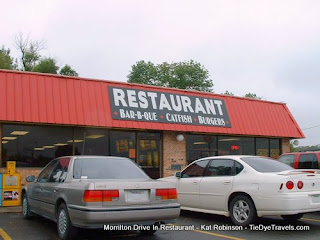 Family dinners out can be frustrating. If your family is anything like mine, you probably spend more time discussing where you're going to get dinner than you do in transit to your dinner.

The Morrilton Drive-Inn Restaurant has it all. It proudly proclaims some of its many specialties on the large sign above the door - "Bar-B-Que*Catfish*Burgers." Some have believed this means the restaurant offers a barbeque catfish burger. Well, not yet, but I bet if you asked for one the good folks behind the counter would oblige.

The restaurant, a longtime standard of the area, sits right off Interstate 40, cattycorner from Love's Truck Stop. The unassuming brick building's parking lot is often full of vehicles, and there's inevitably someone at the drive-thru window. But don't let the cars discourage you -- you'll want to stop and eat here. 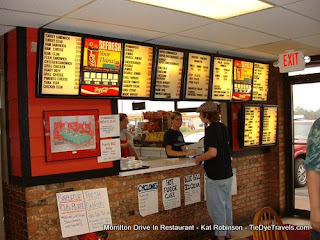 The restaurant, like many drive-inns and drive-thru of the carhop area, sports a varied board of burgers, dogs, and assorted edibles. But instead of sporting that sign above an order window outside, the window here is in the climate controlled dining room. And you'll want to come in. 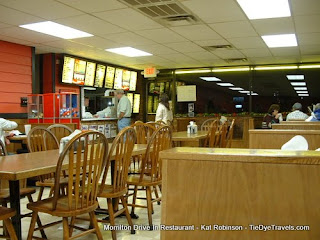 It's not uncommon to see groups of people standing off away from the window, mouthing the names of the extremely long list of delicacies posted on that board. If there weren't enough choices there, there are certainly enough when you count in every hand-printed sign below and to the sides of the order window. Deciding on an appetizer or meal is something that could take hours of contemplation. 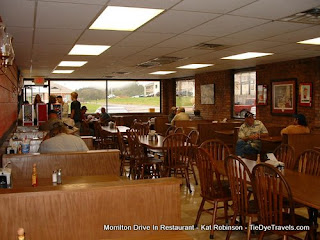 And that's not all. There are also a fine selection of catfish options, and plenty of dinners (chicken fried steak, pork chops, ribeye steak, hamburger steak) with hearty vegetables. There are unusual things like the chili steak sandwich and the hot beef dinner. And there are loads of appetizers -- stuffed peppers, fried cheese, frito pies, crinkle fries, and onion rings. Add in the list of desserts like fried pies and hot fudge cake and a long list of Cyclones (thick ice cream shakes) and you can see they offer just about everything outside of caviar and creme brulee.

With a list like that, you can understand why there's usually a line of indecisive folks pondering the meaning of catfish or the existance of ribs. Fortunately, most folks have a good incentive for making a quick choice -- the delicious smell of good food and the sizzle of a primed grill.

Some days, the wait for your food can be as long as 20 minutes. But most days, it's more like five to ten -- depending on what you order.

Many of the customers that pass through here are truckers who have been let in on the secret of the restaurant, and residents of other I-40 towns who pick up an order on their way from point A to point B. I've been guilty of this myself. Oftentimes, on the road to my father-in-law's place, we'll call ahead and ask him what he wants for dinner. This restaurant is one of his favorites, and his favorite food at the restaurant is the hot fried catfish. 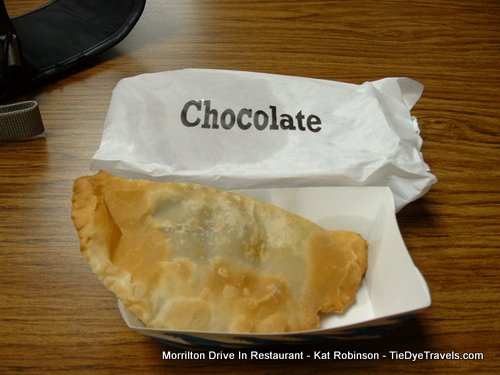 My husband likes the burgers, so on this particular December day I stopped in on my way home to Little Rock to pick up dinner. After a busy day of looking for places to feature in Tie Dye Travels, I had worked up an appetite, and though I'd keep my entree for our mutual dining experience when I arrived home, I just had to grab a fried pie.

These may not be as good as the ambrosial pies at Ms. Lena's, but they are generous and tasty. I sat down at one of the open booths and proceeded to consume my cold pie while I waited for my order to come up. I also listened in to conversations by some of the regulars, at this time debating the fate of Houston Nutt and the Hogs. Morrilton may be geographically between the UCA Bears and the ATU Wonderboys, but folks around here proudly bleed Razorback Red.

About seven minutes later, I had my precious cargo and was ready to hit the road.

The repast from the Morrilton Drive-Inn Restaurant counts as what my husband and I call "kitchen food," food that rarely leaves the kitchen before consumption. He was happy to see me, but even happier to see the Super Cheeseburger I'd bagged during my travels. 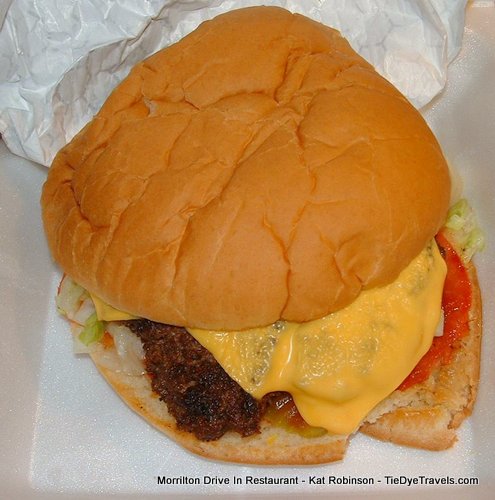 The Super Cheeseburger ($5.49) may appear relatively small in this picture, but don't let that fool you. It may not be an Ed Walker sized monster, or compare with the Sasquatch Burger at the Big Foot Lodge. But this is still more food than the average person could consume in a sitting. A full pound of black pepper-laden ground beef is hand-formed and slapped onto the grill, then squished between big lengths of paper towel before being plopped onto a big bun. American cheese is flopped down on top while the meat is still hot, allowing the creamy cheese to spread into the crevices on the surface. 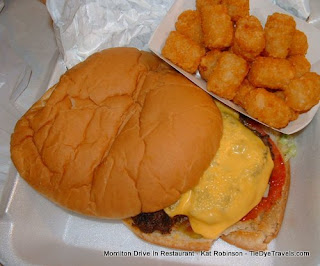 The burger comes with hefty slices of tomato, shredded lettuce, hamburger dills and doses of mayo, mustard, and ketchup. Think that's a lot? The restaurant also offeres a Double Super Cheeseburger. Both of these big burgers are wrapped carefully in an almost-too-small foil wrapper and encased in their own separate Styrofoam containers. Add in some tater tots, and you really do have a meal for two. 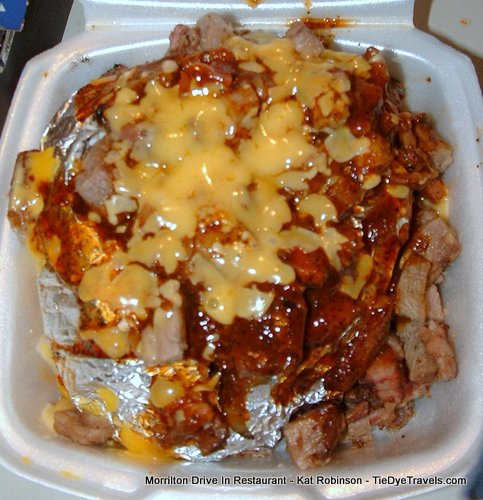 But not on this night. I let Paul manage with the burger as I dug into my own favorite from the restaurant -- the Stuffed Barbeque Potato ($4.29). This monsterous spud would already be a tight fit in its own Styrofoam box without the add-ins, but with them it takes up almost every bit of space inside. Before the main event is added, the potato is broken open and lubricated with butter and sour cream. Then on goes a layer of barbeque meat (be sure to let them know whether you prefer pork or beef), an ample dousing of the restaurant's smokey and savory sauce, and a handful of shredded cheddar cheese. The kitchen crew doesn't skimp on the meat -- there's easily half a pound of hand pulled smoked beef on the potato, and it's a definate struggle to finish. 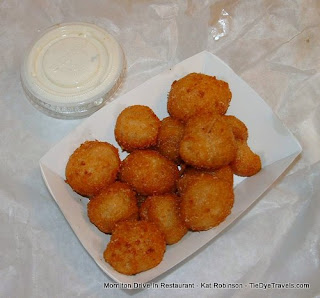 If that weren't enough, I also imbibed a little, adding on an order of fried mushrooms. While not exclusive to the restaurant, these offerings are properly cooked and served with their own plastic ramekin of ranch dressing.

The price for this repast? With the burger, tots, potato, mushrooms, and pie, my total came to less than $20. Prices are more than reasonable, and the servings are ample. 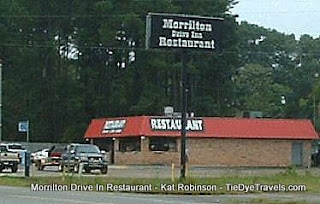 To get to the Morrilton Drive-Inn Restaurant, take I-40 to the Highway 95 exit. It's about two blocks south of the interstate. Look for the red roof. And if you know what you want in advance, they do take call-in orders to (501) 354-8343. Be sure to arrive hungry.