A Bowl, A Map, An Idea - Making A Piece For Arkansas Foodbank's Empty Bowls Event. 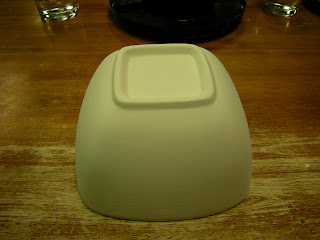 Each year, I paint a bowl for Empty Bowls, the annual fundraiser auction for the Arkansas Foodbank Network. It started out as a "hey, you could do this, too" thing and ended up becoming an annual tradition for me.


I really didn't want to wait this year. I know life's about to get really busy, and I will be out of town a lot. So I decided that this particular Ladies' Night at Firefly Studio, I'd knock out my bowl. 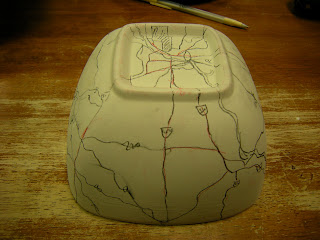 As nerdy as it may sound, I've been thinking about this for a while. In fact, I've been thinking about it since last Empty Bowls, when I received some good commentary on what I'd done last year. I have been experimenting with geometric patterns, and so far have done a pointillized bowl, one covered with "e" swirls in various colors, and last year's -- which was a compass star in blue and off-white on a purple field on the back, and tiny blue and purple daisies inside.

I'd come down to two ideas... one, a swirl design similar to the sky in "The Scream," and the other a map of Arkansas. I figured it wouldn't be hardto knock out something that represents where I'm at in my life. So I started out small. 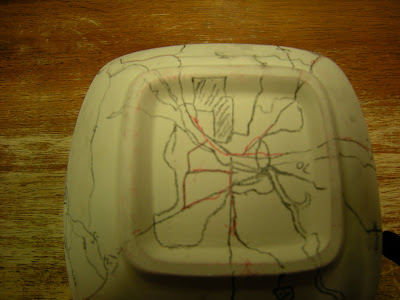 I scratched out the rough design with the assistance of an old 2003 map and a piece of red transfer paper. After getting the general direction going with the Central Arkansas roads, I switched to pencil and traced my lines, then extrapolated the roads around the sides of the bowl. I then sketched out the Arkansas and White River and several lakes. 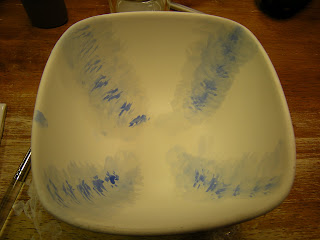 The next step was to go over everything in paint. I started out by giving the entire bowl a wash in water and a little cream colored paint, inside and out, so it wouldn't just be plain white. This also went over my pencil lines, but that's okay -- they'll fire out.

On to the interior. I decided I wanted a tie-dye like wash to further reflect what I'm doing now. Get it -- travels being the map, tie-dye... oh, nevermind.

I accomplished the first part of this effect by dipping my brush first in water, then in blue paint, then tapping it up the inside of the bowl in each direction. I started with blue and red, then returned to the outside of my bowl. 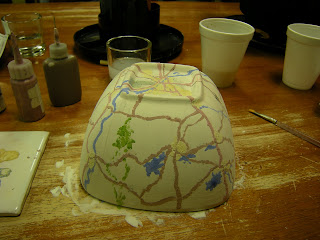 I know the colors will fire up differently, but it was a little strange, using light blue and pink paint to slowly outline everything. I started with the interstates (which will be red), then the other highways (dark brown). I went over the interstates twice so the color would be dark. I then went over Highway 67/167 -- since it's not an interstate but probably should be -- in the brown so it wouldn't appear to be the same as an interstate.

I was originally going to put the highway shields on each highway, but then realized that (a) I couldn't get the paint fine enough, and (b) the shields would be the wrong way around on one side of the bowl. After taking a careful look at Pulaski County on the bottom of the bowl, I figured people would get the point and left them off.

I went back and marked the major metropolitan areas in yellow, the lakes in blue, and the national forest areas in green, just for some contrast. 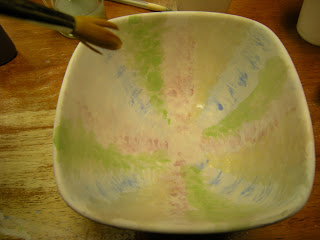 After this, I returned to the inside, where I went between the red and blue I'd dotted in earlier and added green and yellow. This will be very, very light when it fires, since I only used one watered down layer, but I think it will look nice and not detract from the exterior. 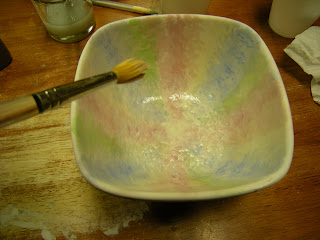 After that, I went over the entire inside with another cream and water wash, carefully dotted on to help smudge up the lines for a more tie-dye look. For some reason, this brought out the red a bit more, but that's all right. 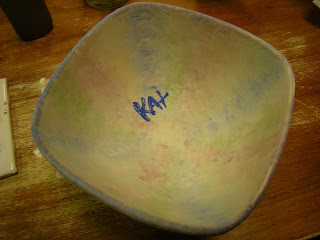 Then there's the matter of putting a name on it. Firefly Studio has a policy -- you MUST put your name on the items you make. Well, that's all right -- the Foodbank likes artists to sign their work, too. So I went ahead and just skritched out my first name in my signature scrawl. It's almost unique (there's a rock guitarist who signs herself as The Great Kat whose signature is similar, but I have proof that I started signing my name this way back in 1993 -- it's on the old KXRJ programming logs, for sure!). This I went ahead and did with a paint tube... it can be dark. When someone's eating cereal out of it (as if!), they won't be able to see it.

I also added a fine wash-over with first red then blue paint along the edge. Naked edges look tacky. 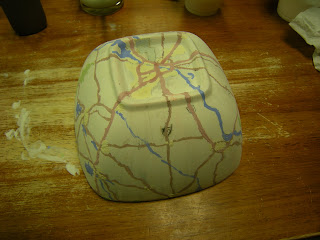 I turned my bowl back over and did a little cleaning up with the paintbrush edge, and darkened Camp Robinson a bit more. And that was enough for me to call it good. 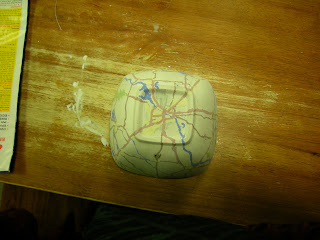 Empty Bowls is always a fun event. This year's event will be held at the Greek Annunciation Church on April 18th. It's usually a blast -- folks come and knosh on appetizers from local eateries, peruse the silent auction items, and are entertained with music. Then there's a live auction, which is often hilarious. Last year, Tracee Gentry did one of her fabulous live paintings there. 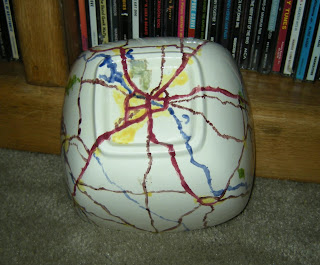 Of course, it's more than just fun to attend the event and to make a bowl. All the proceeds go to the Arkansas Foodbank Network -- which helps feed hungry Arkansans. Can't beat that with a stick. If you'd like to be one of the artists this year, or you'd like to buy tickets to the event, call the Foodbank at (501) 565-8121. Tickets are $40 -- $32 of which is tax deductible. You don't have to be a great artist. It doesn't hurt, but if I can manage to help out a little by slopping some paint on a bowl, so can you. 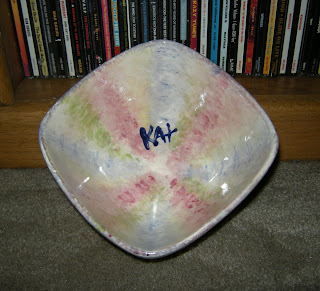 I picked up my bowl on Friday, January 18th. I am thrilled with it. I am surprised that the red on the inside stayed just as intense through the firing. And I think the contrast on the outside is incredible. From across the room, it kinda looks like a mashed up map.

It's not too late to make yours. The Arkansas Foodbank Network has a contest for the bowl that will go on its flyers and promotions for Empty Bowls -- that wraps up February 8th. But you have through April to get yours in. C'mon -- it's not that hard.


UPDATE: I've done a number of bowls over the years for Empty Bowls, but I've missed the last couple of years. I need to get back in the swing of things.

Any of you have any of those bowls I made?