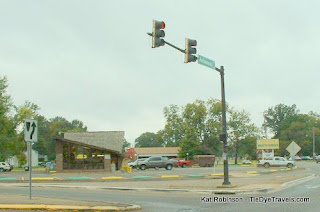 In almost every city or town in America, there is one local hangout that's been around for ages and ages... the place you send out-of-towners to when you want to share a bit of your roots and culture.

Arkansas is full of these places -- whether it's Ms. Lena's Pies in DeValls Bluff or The Front Page Cafe in Jonesboro, they're places you have to experience to get the true flavor of a town.

In Russellville, hands down, it's Whatta-Burger. There is no other place that comes close.

Having lived in Russellville, that says a lot. For the locals, there are other places that hold great memories and great food. Such as the Big Red Drive-In, Taco Villa, and of course Stoby's.

But there's no place that resonates more that the Whatta-Burger.

This isn't one of the chain -- that would be Whataburger -- and you won't find any orange Ws or cheesy promotions here. What you do fine is good food in large portions, at a restaurant splashed with the history of Russellville and Arkansas Tech University. 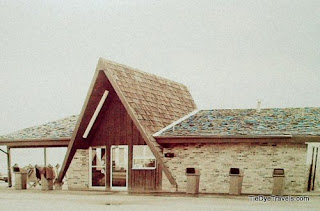 Bob Feltner built this landmark. The first Feltner's Whatta-Burger came off the grill in 1967. Whether it was an everything burger or plain or even a "sissy" is lost to time.

The burgers are made on an assembly line that would make even Henry Ford proud. When you walk in, a host or hostess is there in baseball cap and apron, waiting to take your order. Each order is written on a paper sack in that marvelous code that old man Feltner developed years ago. Your sandwich order goes on top, followed by the side (French fries or onion rings) and the drink (sodas and fabulously thick milkshakes). Fried pies, you ask for at the register. 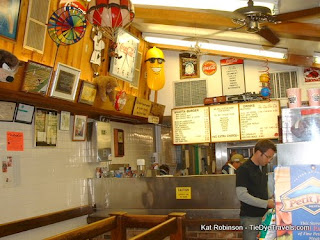 After the server takes your order, that sack is handed back to the grill. The grill guys (and gals) look at the order, and it's called out. Meat gets flipped onto the grill and starts sizzlin'. When it's cooked, it's plopped onto buns and shuttled over via paper bag to the dressing area, where lettuce, tomato, pickles and condiments are all added to your custom order. The sandwiches are wrapped, and hefty bags of fries or onion rings are dropped into the sacks with your sandwich. If you're eating in, they're placed on red trays instead.

Milkshakes are all hand dipped and measured, and whether it's something normal like chocolate or something exotic like peanut butter (my brother's favorite) or pineapple (mine) it's served up in a big Styrofoam cup. The medium suits me fine... I once tried the extra large and ended up freezing most of it for later consumption. 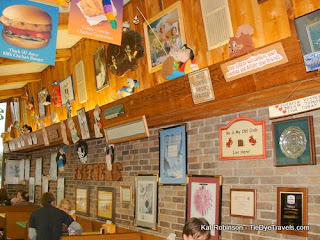 And that's the thing -- old man Feltner never did like tiny quantities. He wanted you to be full when you left his restaurant. The fries come in two sizes, half orders and orders -- and Tech students have been known to come across the street, order the full size and dine on them for a week.

There are all sorts of other things on the menu, too -- like hot dogs and bologna sandwiches. You can even make your burger bigger -- calling a Double (two patties of meat), a Double Double (that plus two pieces of cheese), and even a Triple (three patties). I have never once in my life stood in that line and heard anyone ask for a Triple Triple. That would just be way too much food! 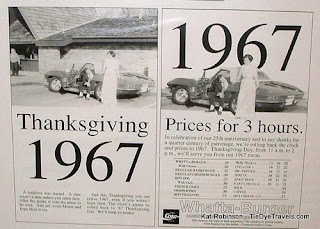 Most days, you can find a seat in one of the bright booths in the store. Locals will call in their orders and pick them up at the window -- but if you've never been inside, you are missing something else. Each year before school starts, the restaurant is closed and cleaned from top to bottom. And that's when the decor is changed. Mr. Feltner used to change up the decor completely when he was still alive, but his daughter and her husband just change out a few things. They want it to still retain the feel it had all those years ago.

Some of it is corny -- messages on wooden plaques with advice and folk sayings. There are pictures of three generations of Feltners, along with plaques won by local baseball teams and Wonderboy memorabilia. And you can't miss the awards -- from places like the Arkansas Times and magazines and such. There are letters from celebrities and politicians and plain folk like you and me. And there are the kites and stuffed animals Mr. Feltner loved so much. Most of this stuff has been donated over the years, and all of it is about Arkansas. There's enough to complete a book right there. 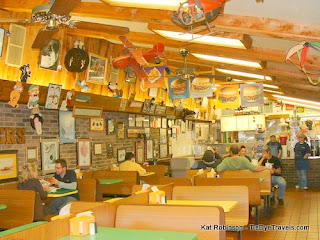 And it's definitely a place of love. Mr. Feltner saved many a Tech student from lack of nourishment over the years. He'd run into kids and have a stack of business cards -- when he heard a sad story he'd scrawl out a note on the back of a card for a free meal or burger. Sometimes he'd invite the kid to come over and work for a few extra dollars. To this day, a large part of the staff consists of Tech students trying to make it through college.

Mr. Feltner also helped me get my start. Back then, I was a young student with a yearning to be a radio star. One afternoon I sat in that front booth with my single half order of fries, trying to figure out what I was going to do with my life and my potential career, and he came over and talked with me. I told him about my dreams, and my budding new show on the college radio station. He walked away, and came back with a stack of his business cards with his familiar scrawl on the back. The way he figured it, he told me, if I gave people the chance to win a free Whatta-Burger meal every time I went on the air, more people would listen to me.

And he was right.

Mr. Feltner died a few years ago, and his funeral was probably the biggest funeral anyone had ever seen in Russellville. People came from all over Arkansas and all around the United States to pay tribute to this man who gave so much. Sure, it might have only been a meal, but it was that sort of gesture of kindness that meant the world.

Today, you can visit Feltner's Whatta-Burger. It's on Highway 7, known locally as Arkansas Street, across from the Arkansas Tech University campus in Russellville. If you don't have much time to stop, call in your order ahead at (479) 968-1410.

And in case you were wondering -- a "sissy" is just a way of preparing a Whatta-Burger -- with just lettuce, tomato, and mayo. Want it with a slice of American cheese? Ask for a Whatta-Cheese. And don't forget the fries.

POSTSCRIPT: The very first restaurant piece I wrote for Tie Dye Travels happens to be a place where I was a frequent customer in the early 90s. Fitting.