Bridges and Strings - A Chat with Violet Hensley. 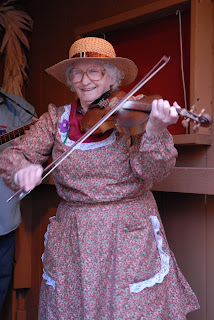 Violet Hensley plays the fiddle. She makes fiddles. You could say she’s spent a lifetime, fiddling around.

And what a remarkable woman she is.

But this particular Friday morning, there was a nip in the air. A cup of cider would have been nice, but instead Violet kept her eyes to her work.

This small section was the back of what one day will become a very, very tiny fiddle.

You could say violin, and Violet would nod and know what you’re talking about, but in her world that’s a fiddle and that sort of instrument has been part of Violet’s life since, well, since always.

And always spreads back all the way to the Roaring Twenties, though she’s not likely to call her formative years that. In fact, Violent doesn’t use much of the cliché and slang words we use. She’s a lady, after all, and that’s not how ladies talk.

Violet shares her craft each year with an everchanging public. She has a booth at Silver Dollar City, where she peddles a few CD albums of her music and shares a craft she’s loved since childhood -- the creation and the playing of the fiddle.

Violet didn’t go to school to learn music. She was well into her maturity before she ever took a formal music lesson and learned what all those notes on a page meant. She didn’t even know the names of the notes she played, She just played what she heard.

Violet’s father had a fiddle form, and when she was a young woman she made her first fiddle. She’d later marry, and as she puts it, she had to choose between a jealous husband and her instrument, so she sold that wooden wonder and started about the business of having a family. 37 years later, she’d retrieve that valued instrument and pick up with her musical life.

And what a life. As we chatted that unnaturally cool September morning, a young man sat behind her with a guitar, quietly practicing chords. A little girl, not even two years old, toddled up to her booth with a bag of candy from the candy shop next door. This little brown eyed tyke is Violet’s great, great granddaughter.

The family is very involved at Silver Dollar City. The woman who came up to usher the toddler into her place in the booth is Violet’s daughter, and the young man a grandson. Violet says she’s been blessed -- with 42 grandchildren and 42 great grandchildren and 12 great-greats. What a legacy.

We talked for a while, as her audience came and went. She showed off that first fiddle, a fine instrument that’s taken the wear and tear of almost eighty years with grace. Some things grow better older -- but Violet will tell you that you do improve to a certain point and then level off a bit!

She showed off other instruments -- including one a gentleman brought up for a little work. She recognized that piece right off -- a blond fiddle with a horse head that had been gone several years. She also showed necks and backs and bridges she was working on.

She told me the little fiddle back she was working on now was something she’d been fiddling with (the pun is unintentional) for decades. One of her oldest forms, more than a century old, has the band of wood that will be the outside of the box, holding its form for her. She told me her eyesight is starting to fade a bit, with that macular degeneration, so maybe one of her children or grandchildren will complete the tiny fiddle, gluing it together and adding the tiny details.

It used to be easy, she said -- showing off the tiny fiddle pins she made that she still wears. But after 91 years, you start to wear out a bit.

Violet says on her 90th birthday, the folks at Silver Dollar City threw her a big party in the square, and she danced. She loves to dance.

Violet remembers when this big attraction in the Ozarks was just a tiny little village, when the original owners planned it all out with its square and gravel trails. She told me about the couple who fell in love with the idea of this quaint Ozark craft village that would keep the turn of the century alive. She also told me the woman kept her husband’s dream alive, when he passed away just before the park opened. 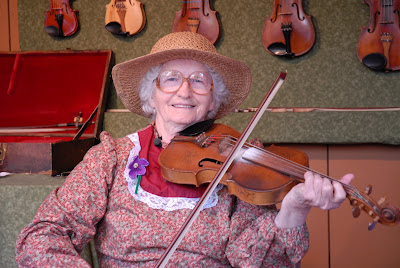 Lots of things have changed. The trails are all paved and the park has increased in size nearly 10 times over, and now in the distance you can hear kids screaming and hollering from riding PowderKeg or The Giant Swing. You can hear the train whistle and the muted conversations of thousands of people. And from Violet’s booth, the chime of the blacksmith’s hammer on anvil make a nice accompaniment to the excitement of the day.

But for Violet, there’s just fiddle music, and she will play until she stops. And that’s good enough for her.