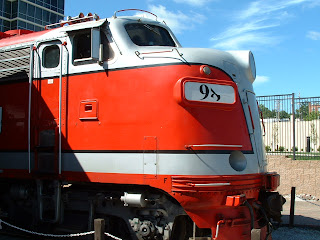 The Branson Scenic Railroad is something you might not expect in Branson -- something that is completely historical and not the least bit gimmicky.

That's not to say that there aren't gimmicks to get you to go. You can find the flyers and schedules right along with the show pamphlets and attraction brochures wherever you find Branson information. It's just as glossy as any of the other ads you'll see.


But when you step onto the platform, you're in for a historic treat. 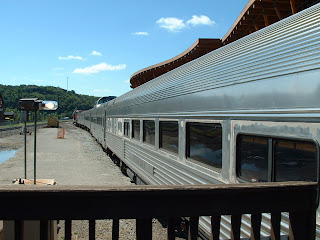 Just like in the glorious past, you go and purchase your ticket at the window in the depot. You wait on the platform to board, and then you can go aboard and grab your seat and settle in for the journey.
And what a journey. You travel 20 miles one way or another (either north further into Missouri or down across the Arkansas border) and more than 100 years into history. My trip was the southern route.

The morning was particularly nippy -- the first cool morning since early May for this area. Surprised tourists had come to ride the train in a variety of t-shirts, recently purchased sweatshirts and the occasional jacket. We waited aboard the platform for permission to board.

Being the morning of September 11th, we were all asked to observe a moment of silence, then the veterans were recognized. This happened all across Branson that morning... a solemn but not overly observant recognition of the event six years ago.

Then we were allowed to board in groups of 25. I had arrived a bit later than I had anticipated, and boarded with the second group. Seating aboard the train is unassigned, so if you want your pick of seats, come early or reserve in advance. Not that there were any shortage of seats; there weren't all that many people aboard for this 9am departure. 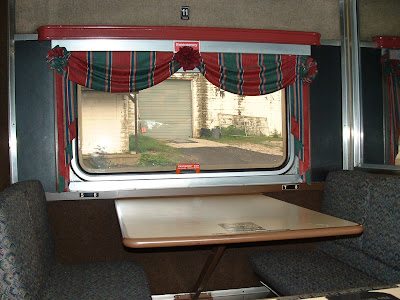 I settled into a booth on the “Silver Eagle," a 1949 Budd 60 Seat Coach next to the vestibule where passengers were boarding. I set up my pen and camera and waited to go.

And it didn't take long. Soon we were rolling along the rails beside the Branson Landing. 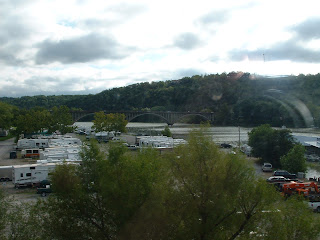 After a brief pause while the rails were switched, the train started to gather steam (well, not really, since these are diesel powered locomotives) and headed out along the way.

The train picked up over Lake Taneycomo after passing one of the largest RV parks I have seen in the area. 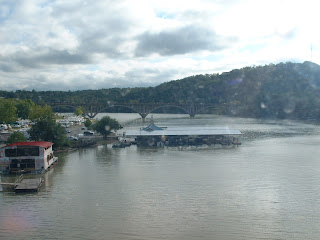 The RV park is recent -- and busy. Just a few years back this land below the 65/76 bridge between Hollister and Branson was little more than an unoccupied flood plain. Now -- those who want to stay in their own portable homes have a place to pull up and plug in, right by Branson Landing. 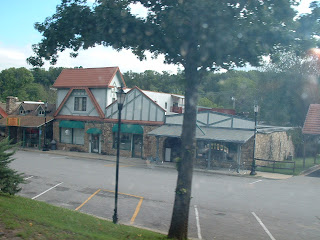 Over the bridge and out into the county -- we proceeded to the only occupied town along the route. Shops still line the tracks at Hollister, MO. It became a tourist attraction around the turn of the 20th century because of the ready availability of passenger train service. There's a small depot beside the tracks that was built in 1910. Now it's a community center. Further along, there's Turkey Creek, which parallels the route for quite some time. It's a shallow, clear creek with shoals and rocks. The clear water looked refreshing, but with the chill in the air there were really no thoughts of taking a dip.

The train travels three to four times a day along track laid for the Missouri Pacific railway. The narration tells you about the history of the train and the track, about the men who made less than $2 a day carving tunnels through hills and building trestles more than 100 feet high, just to bring rail service through the area. The narrator talks about the trestles in length -- especially about the fact that these once barren wood trestles have all been packed in with gravel and soil, so they now appear as earthen berms along the route. What an incredible feat.

You also learn about the ghost town of Melva, wiped out more than 60 years ago in a tornado and never rebuilt. This once prosperous town just didn't rebuild. You can still see the remnants of the town's hotel on the hillside.

On through the first tunnel -- and it was at this point that one of the helpful engineers came through and mentioned that I'd have a lot better chance at getting great shots from the dome car. For some reason, it hadn't occurred to me. So I carefully started making my way along the train.

The noise in the vestibules is considerable -- but it also reinforces the feel of history. Imagine how this must have been when rail travel was the only way to go, before the advent of air travel and all its glory. The rumble of the tracks below echoes the movement in the vestibule -- which actually bends as the tracks turn. 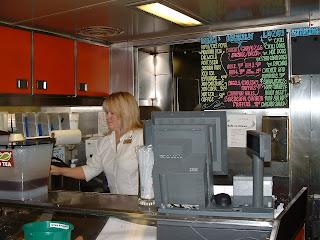 From the coach car I walked into the concession car, the “Silver Lake," a 1951 Budd Buffet Lounge decorated in shades of brown and burnished chrome. Here you can grab a snack or a meal during your trip -- hot dogs, cold drinks, and candy, among other things. 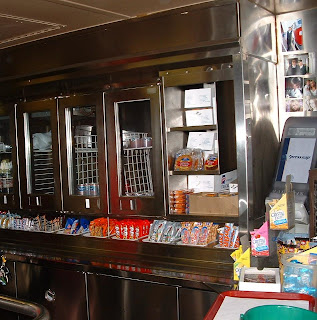 Just remember you're on a train -- unfortunately, one poor woman dropped her nachos in the vestibule on my Tuesday morning trip. The staff here is very chatty, very interested in the people who come aboard. As you stand in line (handrails are provided), you can choose your selections from the caged cabinets next to you or have one of the lovely ladies behind the counter fix you something warm.

Further along, you pass into the “Silver Terrace," a 1952 Budd Dome Observation car. For some odd reason, the first open doorway along this stretch contains a playroom for the kids. I suppose kids need to be entertained on any trip -- and with the average run being about an hour and 45 minutes, this makes sense. 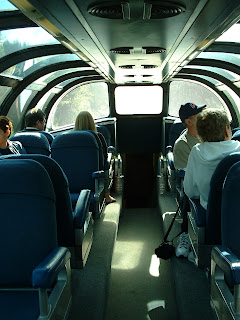 In the next compartment, I found the narrator at his station and a couple of occupied booths. The narrator suggested I turned around -- and then I saw the staircase. 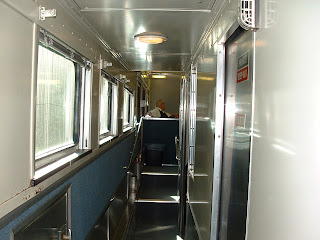 Up this stairway is the top of the dome car -- a passenger area with windows all around. The car was designed to take advantage of the best clearance along the rails, and it poked out above the rest of the train. 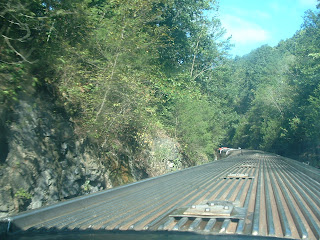 This does allow for some very unsettling moments for some -- when the train enters tunnels that appear to be low to accommodate the elevated domes. But there's no better view by far.

I snapped off a couple of pictures right off the bat, then proceeded back in the car to the rear.

Seats in this section are arranged booth style -- without the tables, of course. I'm sure those who have a hard time traveling backwards appreciate the chance to change seats and ride forward on the return trip! On through the second tunnel, and then forward on to two more trestles.

The train stops at the Barren Fork Trestle, and there's a short time where you can look out over the valley in either direction from high above, while one locomotive is powered down and the next is powered up.

Here I was afforded some of my best shots -- the dome car's windows are kept impeccably clean (which must be quite some effort, since they're so far off the ground!) so everyone has a clear view of the way. 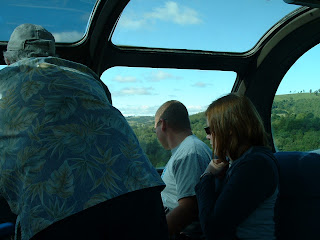 Several of my traveling companions took the chance to come stand at the rear of the dome with me, snapping pictures and chattering. 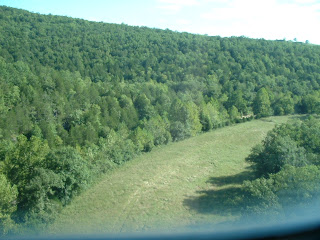 From this angle I was able to capture both of the tunnels on the way back in grand fashion. Going through the second tunnel, the crew cuts the lights, and the narrator made a remark about "heading for the light at the end of the tunnel." 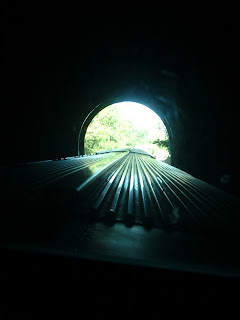 For most of the journey back, the narrator allows passengers to enjoy the sounds of music from the grand era of rail travel -- hits from the 20s through the early 50s -- and not just expected hits like "Chattanooga Choo-Choo" (though of course it's played -- the trip probably wouldn't have seemed complete without it).

There's a real sense of yesteryear. 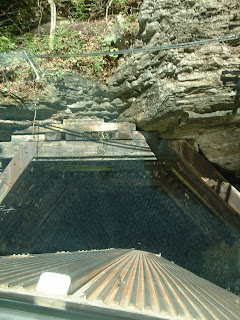 Unfortunately, I've never ridden on a train traveling backwards while taking photographs, and I suddenly found myself a bit seasick. Surprised by the situation, I asked others in the compartment if they'd had the same reaction. It was explained to me that I wasn't that unusual. Think of it like this -- the rails are the fulcrum on which the train operates -- and the higher in the train you go, the further away you are from the base. Which means -- if you are in the dome, you're going to move around a lot more than if you're downstairs. 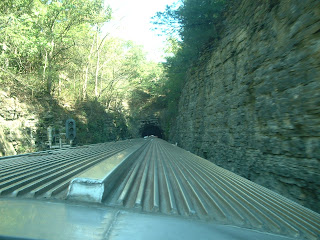 I made my way back down and settled in the concession area. As we streamed along the rails again, I talked with the wait staff. This is apparently one of the lighter days -- usually the train has a lot more passengers. Perhaps the suddenly nippy weather has encouraged many to sleep in?

And quicker than I expected, we were rolling back over Lake Taneycomo and traveling into downtown Branson. There was another pause as the tracks were switched -- and as we waited I looked out and saw a woman in her SUV staring back as she sat at the crossing. It's another reminder that we've moved on from the fantastic rail world... and into our own personal realm.

There are certain charms about traveling the rails. You can eat, sleep, and entertain yourself aboard the train; meet new friends, and more (of course, being a short run, there's no need for a sleeping car aboard this train). You are, of course, at the mercy of the rail schedule and switches and you can't exactly drive up to your house in a train. 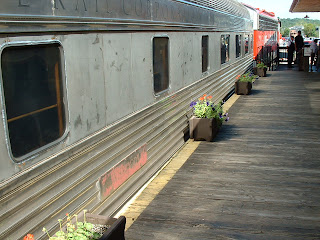 But perhaps we've lost something by not having this great mode of transportation available. Yes, I know Amtrak runs through Little Rock and other points in Arkansas, but how charming can a silver bullet be, compared to this proudly period example of early 20th Century rail travel.

Don't get me wrong -- this isn't a perfect reproduction. While the cars have been restored, they do show the heavy passenger load they've carried over the years. There are some torn seats, some scarred windows and plenty of rough corners. But that's perfect -- this train isn't new by any means, and it's proud of that fact. 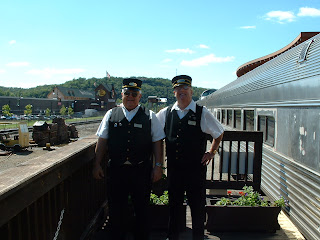 On deboarding, I captured shots of the platform -- it amazes me that the platform is built so close to the rails. There's just a matter of inches between the cars and the wood. I love the geraniums planted alongside -- they make a nice touch.

And two of my gentlemen hosts were proud that I'd want to photograph them -- heck, they even agreed to put their arms over each other's shoulders! What a fantastic crew! 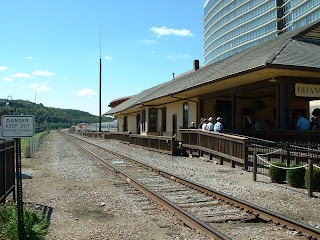 As I left the platform, I passed another group of passengers waiting to board. I looked over the crowd, and saw so many faces above t-shirts and jackets with all sorts of messages that broadcast these current days. Take away those costumes, and these folks could just be any group traveling to a distant city... or in this case, a distant past. 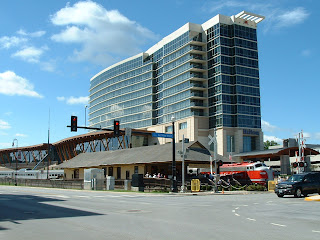