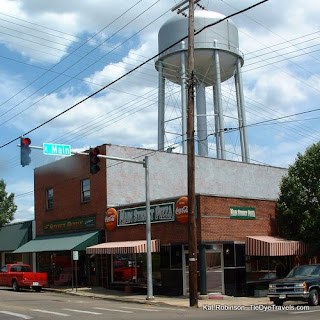 El Dorado is known as Boomtown, from the big oil boom down there around the turn of the century. In the past ten years or so, it's picked up the title again and ran with it -- with the rejuvenation and promotion of a fabulous downtown. There are all sorts of great shops and places to stay, and unusual sights, too -- like those neat red phone booths you see in England and sometimes even horses and carriages.

But there's a treasure you might not know about -- just because you can't see it from the town square. And if you don't know about it, that's a real shame.

Well, a momentary shame -- because you're about to learn about this place. Read on.

It's not something that will take you back to oil boom times, but it's still a bit of a time machine -- bringing you back to the days when cracker crust pizza was the rage.

Main Street Pizza is a bright spot on dark evenings, a place to bring the family or a date for good food in a clean fun atmosphere. Here you'll find tables and booths just itching to take you back to yesterday. 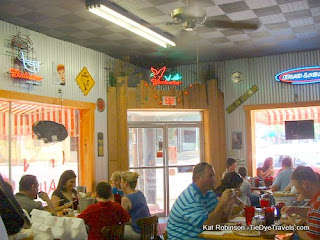 Beneath a checkerboard ceiling and neon lights, you'll find yourself within a corrugated tin-walled haven. Tables crowd the front of the restaurant, ready to serve a quartet or a party. Memorabilia from the area and the great dining out age line the walls. 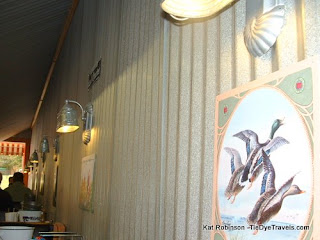 The booths are lined up along one wall -- each one with its own inverted tin tub light fixture. I've never seen any of these anywhere before.

The menu is full of good ideas... plenty of salads, lots of sandwich options (including what is purported to be South Arkansas' best Reuben sandwich), and of course the pizzas. You can order large and extra large pizzas, either one of the specials or a "build your own" buffet of choices, rivaled only by Central Arkansas' U.S. Pizza Company. Unlike that particular chain, Main Street Pizza still has green olives as a selection -- a real blast from the past.

My traveling companion and I decided to go for individual pizzas this particular Sunday. The restaurant, which had been half empty when we walked in just before noon, quickly filled with families in their Sunday best. The waitress was wonderfully polite, bringing us iced tea right away along with our bucket of peanuts, before taking our order to the kitchen. 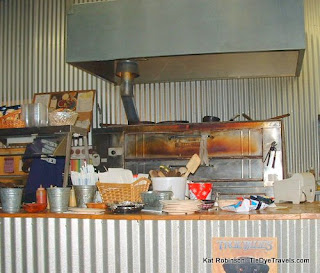 That kitchen was just steps away. Most of the kitchen is actually in the main part of the restaurant, open for everyone to see. There's a real, honest to goodness pizza oven, too -- not one of those conveyor belt jobbies that have become so popular these days. Pizzas, sandwiches, and appetizers are all loaded in the same way -- with a wooden paddle. There's a small prep area, and apparently a place where a buffet is served sometimes, though not on Sunday afternoons. 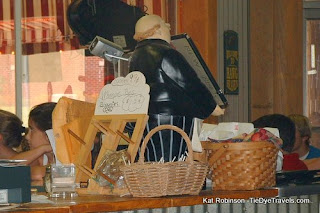 A bar surrounds the kitchen area, and on one end you can actually sit at it, just like a diner. There are also bags of peanuts to take home, and a hometown selection of little items you can pick up at the register -- including something called "Whoopie Pies." We weren't brave enough to try those. In fact, I'm still not sure what one actually is!

It took less than a minute for our pizzas to be taken from the oven on paddles, shuffled off onto serving plates, passed across the counter and rolled under our noses. Honestly, we couldn't resist. I had planned to take a picture of our divine pies before we ate, but the aroma was just too much, and we dug right in. 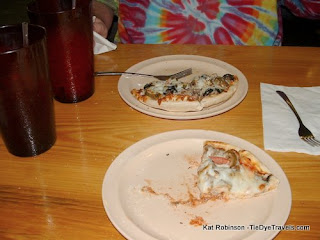 Sure, Main Street Pizza could just use traditional dough or something closer to what the other pizza guys are doing, with gooey crusts or sticking in cheese or sauce or whatever. But they don't. Instead, you'll find that your lovely slices of toppings, cheese, and sauce are delivered on a beautiful cracker crust that can actually be picked up with one hand for easy delivery to the mouth!

The restaurant sure doesn't skimp on toppings, either. And the prices were more than reasonable. For our individual pies, the price started at $2.49 for cheese and a quarter for each additional topping. With our drinks, we had a great lunch for under $10.

While knoshing, I looked over and noticed one of the house specialties being pulled from the oven. I just had to get a shot.

These are armadillo eggs. 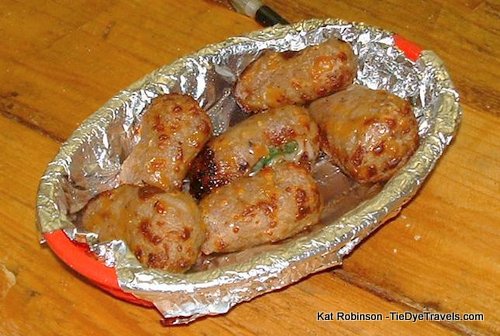 Well, no, not eggs from real, living armadillos. These unusual treats are very popular here -- in fact, in the short time we were in the store, several baskets went out.

These started life as jalapeno peppers -- they were stuffed with cheese, just like all good stuffed peppers are stuffed. But Main Street Pizza goes off the beaten path after that. Instead of a traditional breading, the peppers are wrapped in sausage, then wrapped again in biscuit dough. These would be the Arkansas equivalent of Scotch Eggs, and they are mighty popular.

You'll find Main Street Pizza on the corner of Main and Jackson, about a block off the square in El Dorado. For more information, call the restaurant at (870) 863-0505. 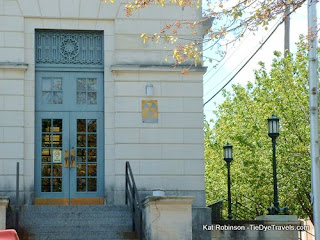 An interesting side note -- when we got out of the car, we noticed something eye-catching on a building across the street. On closer inspection, we discovered it to be for a bomb shelter. To us, it appeared to be as new as it probably was back when it was posted during the Cold War. It's on the southeast corner of the intersection.

UPDATE 8/24/17: After all this time, Main Street Pizza is still around. But today, there's a lot more going on in El Dorado. Check out these other stories from El Dorado: