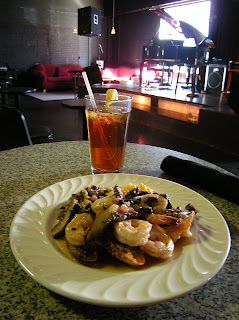 SpeakEasy is trying very hard to please two different crowds. It has a real chance as long as it sticks to good food and good music, and as long as both stay as sophisticated as its patrons.

I dropped by on a Friday afternoon to check out the scene and grab some lunch. I was shocked to find myself the only customer in the place - but that could be attributed to the bitter, bitter cold outside. On my waiter’s suggestion, I went for the Shrimp Scampi ($11 at lunch, $16 for dinner). I was rather pleased with the dish. Served up with fantastically well-seasoned black eyed peas and typical kernel corn, the large shrimp were delivered perched upon three slices of crusty toasted bread. One bite and I was in love. The delicious balance of mushrooms, white wine and the tiniest amount of red onion won me over immediately. Serving the shrimp up on toast rather than in a buttery bath allowed the shrimp to breathe and not become chewy, and the “sop” factor of the toast was well appreciated.

Went back with my dining companion for dinner on a Saturday night. The mood was relaxed, with just a few customers at the bar and another couple across the way at a table. Our waitress gave us recommendations and brought us beverages on a short turnaround while we enjoyed the atmosphere. 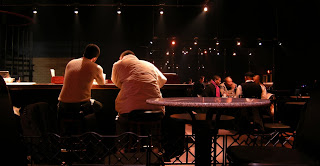 SpeakEasy has the feel of a good high-end nightclub; it reminds me a whole lot of one of our favorite New Orleans hotspots, the cabaret at Le Chat Noir. The room is dark but with plenty of comfortable seating, including a couple of rather large red couches in the corner. The neat and original bar is embossed with vinyl and LP covers, and capped at the end with a live piano. There are live musical acts on Friday and Saturday nights ranging from classic rock to R&B and soul, and the wait staff is casual but kind. It lacks some things you might expect with a more established business, but that may just be a matter of maturity. After all, that takes time, which SpeakEasy just hasn’t had yet. 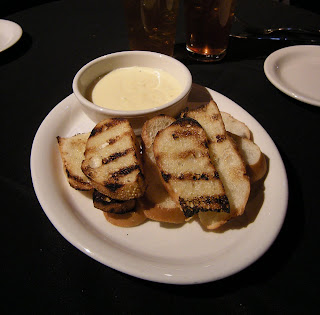 On the recommendation of our waitress, we tried the Crab Fondue ($8) and utterly could not find fault. I’ve had the seafood and cheese sort of fondue so many other places have attempted, but SpeakEasy has it so dead-on, it’s almost worth never ordering it again anywhere else. The unassuming bowl of hot dip and platter of baguette fingers held within the very essence of sweet lump crab meat, a delicious Parmesan-and-other-melty-delights cheese blend, and a talented dance going with the buttery-salty-crunchy heft of the baguette pieces. We were thankful when our waitress came to retrieve the dish; I was mere moments from committing an etiquette faux-pas and absorbing the last of the dip clinging to the sides of the bowl with my fingers. 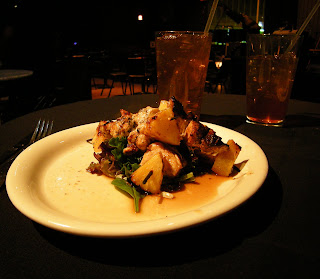 We were quite entertained by the musical selections while waiting for our dinners. French love songs and Doris Day are smattered aurally between layers of Delta blues and R&B dotted trance. The tunes were apparently called up via Yahoo Music to fill the time before the evening performance began. We found the mix eclectic and charming. 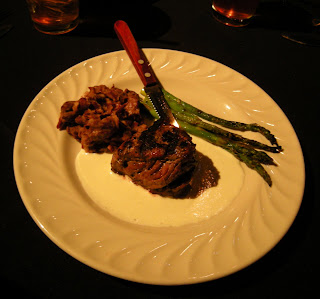 Our dinners arrived; I’d asked for the chef to surprise me with whatever he considered to be his best, and was surprised to receive the Chicken Skewers ($7), hunks of grilled chicken and pineapple with a bit of jerk seasoning. They were delicious but absent the cherries mentioned on the menus. 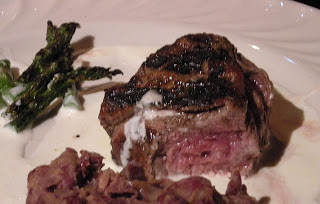 My dining companion was quite pleased with the offering of the Filet Mignon ($19), a gorgonzola sauced and stuffed round of meat that fell apart on touch with the fork. The sauce, while thin, was a nice salty balance to the steak. The day’s vegetable, asparagus, was delicious, and I even thought the starch of the day (red beans and rice) was a nice hearty accompaniment. 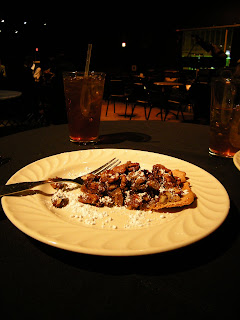 We were doing pretty well, but couldn’t turn down dessert once it came. And here’s where we found the true idea of where SpeakEasy is at. I ordered the Pecan Bourbon Pie, while my companion went for the Orange Chocolate Bundt Cake. Now, when I get pie at a restaurant, it usually comes with whipped cream or ice cream or some sort of garnish. This pie was… frankly, flat. But with one taste all was forgiven. The house-made salty crust was so well matched with the sweetness of the darkly scandalous Karo-bourbon filling and the solid bite of the pecans, I couldn’t help but feel both guilty and happy. 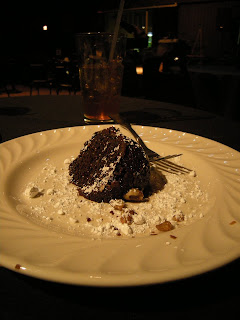 My companion’s dessert, though, proved this is indeed a grown-up establishment. The humble slice of cake held within its moist and delicate morsels layer after layer of flavor, some chocolate, some orange and something dark and secret, perhaps a coffee liqueur or Frangelico. It was something that remained a true mystery, one I’d like to investigate further. 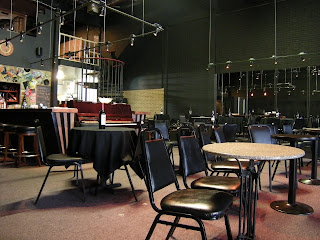 The restaurant does sport a small but mighty wine list, with most by-the-glass offerings sliding under the $10 mark. While the kitchen closes at 10 p.m., the bar remains open until the wee hours, and during our visit remained cluttered with casual drinkers and conversation.

SpeakEasy has that sort of an air to it, as if it’s set to be a stage for some great accidental performance ahead. It’ll be interesting to see how that story unfolds.

As published in the January 2010 edition of Emerald City of the South.
Told by Kat Robinson at 8:37:00 AM