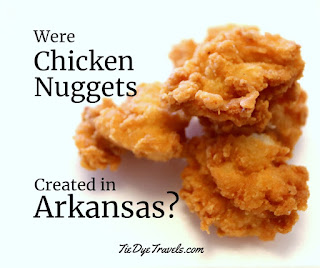 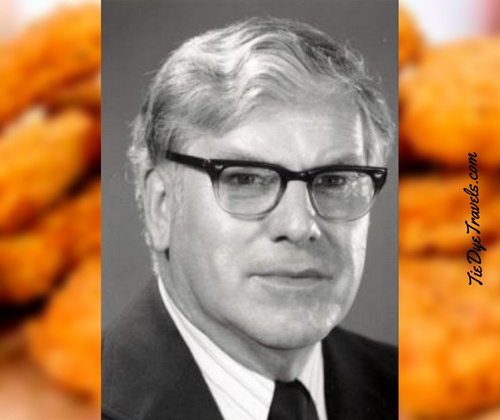 First of all, the person credited for creating the chicken nugget is Roger C. Baker, who created a "chicken stick" of ground chicken, powdered milk ad pulverized grain, with vinegar and salt to draw out moisture. The melange of ingredients were formed into sticks, coating them with a combination of egg and cornflakes, then freezing them again. The year was purportedly 1963. Baker, who had already come up with a frozen chicken meatloaf, chicken hot dogs and chicken hash and who would go on to create turkey ham, never patented the idea. In fact, few mentions of the chicken nugget bear his name before his passing in 2006 (read all about Baker in this excellent article on Slate). 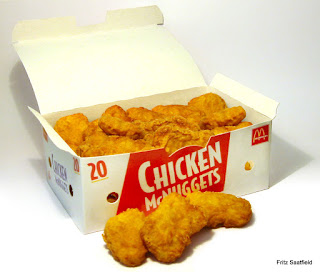 McDonald's is also credited with the birth of the nugget, particularly for the introduction of the Chicken McNugget at the franchise's Knoxville, Tennessee locations in March 1980. There's no doubt that the chain brought the nugget to worldwide attention. But the name "chicken nugget" and even the concept itself may have first been conjured by a woman in Searcy, Arkansas, who had a knack for excellent chicken. 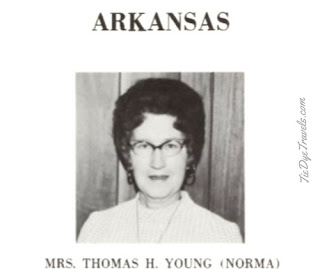 A report from May 29, 2003 from the National Chicken Council may pinpoint Norma Young as the  true creator of the chicken nugget. The piece, released before Baker's death and the many subsequent articles that have surfaced since, is entitled "Convenience: The Key To Growth For the Chicken Industry." In the piece, Elton Maddox, then the chairman of the National Chicken Council, cited Norma B. Young for her contribution."One of the original convenience products was the chicken nugget," Maddox writes. "As some of you may know, the concept of a chicken nugget was premiered right here at the National Chicken Cooking Contest back in 1971, when Mrs. Norma Young of Arkansas won the grand prize with her Dipper’s Nuggets Chicken. Mrs. Young used a piece of whole-muscle meat to make her nuggets and fried them in oil. Mrs. Young was a culinary pioneer."

Young was nearing her 60th birthday when she entered the contest. It wasn't her first try. Her obituary cites an article submitted to Southern Living (though I have yet to qualify which issue, if indeed it was printed), where an interviewer took down these words:

“John Miller, owner of Miller Milling and Feed Supply encouraged me to enter a chicken contest," Mrs. Young is reported to have said. "Why in 1965, he even agreed to sponsor me. You would have loved my first big winner, the Chicken Sundae Sandwich. It was a chicken breast, sautéed, with sundae pineapple sauce and served on toasted French bread slices. Doesn’t that sound delicious?

"But, I didn’t really come into my own until the 1971 National Chicken Cooking contest sponsored by the national broiler council held in Ocean City, Maryland. And wouldn’t you know, I had to wait three months to learn how I had done; and, the notification by telegram didn’t come until 8 p.m., and it simply stated that I had been selected to represent my state at the national level. That recipe was Golden Chicken Nuggets With Three Sauces. And that my friend, was the birth of chicken nuggets and the most popular chicken contest winner’s recipe in history.”

I came across the recipe while doing research on Arkansas restaurants in national cookbooks, perusing the online stores of Michigan State University. The cookbook itself, The 23rd Annual National Chicken Cooking Contest Recipes 1971, is available in its entirety as a PDF. This is the entry. 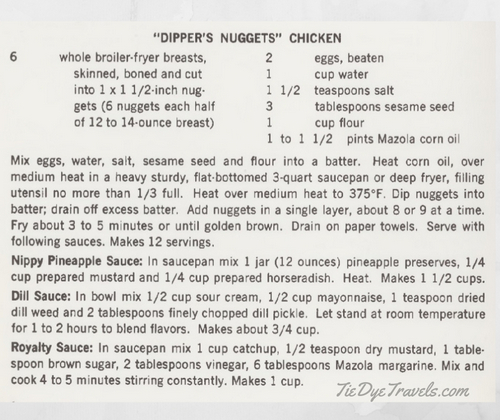 Young's fame would not end with the publication of the cookbook. As the respected Southern food writer John T. Edge notes in his book, Fried Chicken: An American Story, Young's creation became famous.  "In 1971, (Young) was chosen as a United States Poultry Ambassador and, in the discharge of her duties, toured seven European countries. I have an inkling that, despite the lack of bone in her National Chicken Contest-winning Dipper's Nuggets, I would have liked those, too. (The dish was a precursor to the Chicken McNugget, served with a choice of pineapple, dill or royalty sauces.) In 1997, at the age of eighty-five, she sold Chicken Twisters, a new recipe concept, to KFC for a tidy sum of money. If Young decided to open a chicken chain, I would be at her door, money in hand." 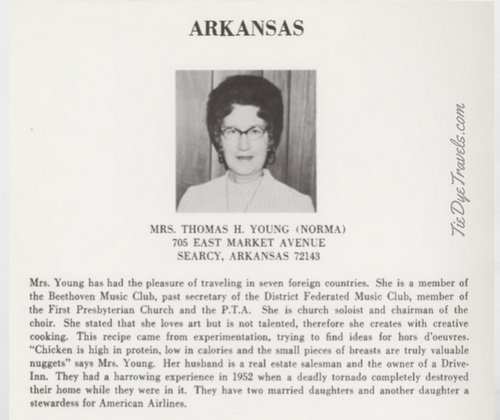 In Young's obituary, her daughter, Kay Wright, recounted another poultry creation her mother came up with in 1994. This time, the recipe wouldn't be entered in the contest. The name for the creation, the "chicken twister," was trademarked, and Kentucky Fried Chicken purchased it for its own use in January 1996.

In the years since the introduction of nuggets by the McDonald's franchise, other chains have picked up the idea and shared their own versions. You can now find them in the shapes of dinosaurs, stars, sticks, rings and all sorts of things on store shelves.

But the more enlightened version of the fowl portion, where the chicken is a cut piece from the bird rather than the processed, somewhat glued-together sections of formed meat, may certainly have been derived from Mrs. Young's recipe and indeed naming of the undoubtedly truer version of the dish. Certainly it's an item that Searcy, Arkansas should be proud to call its own. 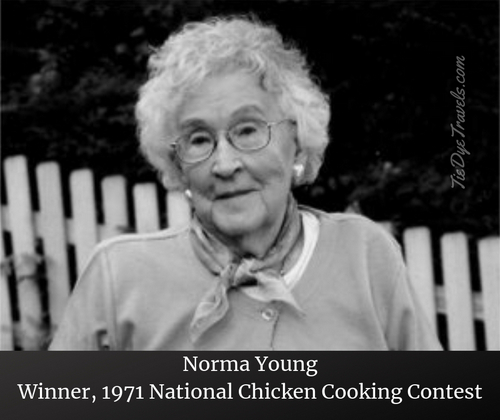