Chicken Salad for Days at The Ole Country Bakery in Brooksville, Mississippi. 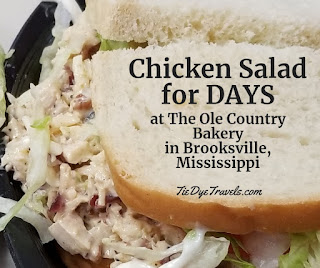 Can two grown adults be satisfied by a single chicken salad sandwich? At The Ole Country Bakery in Brooksville, Mississippi, Grav and I found one worthy of the highest celebration.

My partner and I were on a wide swing back from a trip to Mobile Bay heading back to Arkansas. We'd spent the night before in Meridian before making a push through to visit Oxford before returning home. We wanted to get miles under our tires before daylight ran out, so we just grabbed a snack before hitting the road.

The long stretch of US Highway 45 heading north was pretty, with the blooms of spring all coming out for glorious display. But we were getting hungry - not just hungry, but hangry - and the phones were out to help us find a place to land for, if nothing else, a snack.

Right as we made the diversion onto the next leg of the trip onto US 45 Alternate, I caught a wooden storefront out of the corner of my eye. I managed to slow down, make the cutacross on the other side of the overpass, and rode the access road back. 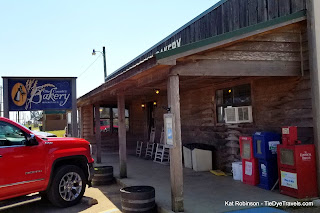 There were a lot of cars in the parking lot of The Ole Country Bakery. It was nigh on noon, and I was excited. Grav was similarly encouraged by his aching hunger to get inside. We promised each other to share a single dish so we would have room for an actual longer lunch once we got to Oxford.

Inside, there was a bakery case to the right, filled with doughnuts, pie slices and other delights. Ahead of us was a long ordering counter for sandwiches. To the left in back, a couple of freezer cases held take home dinners. And both to our immediate left and in a front room, there were cases loaded with baked goods - breads, sweet rolls, dinner rolls, fruit breads and such.

We went to stand in line at the lunch counter. Both of us were road weary. I asked if chicken salad was OK - we'd been eating rich foods like Wintzel's oysters, crawfish, shrimp po'boys and the like for the previus few days and I wanted something less exotic. He agreed but suggested we get a double meat sandwich. I was OK with that.

We get up there to order and our hostess asked about what we wanted on our halves of the sourdough slices we'd chosen. We both agreed to tomato, but while Grav wanted banana peppers (I have no explanation for his tastes) I asked for cucumber. Our hostess suggested we get both on the side, and we agreed.

She handed over not one but two plates to take to the register - one with the sandwich, one with the two items we had asked for. Both were amply piled upon.  We voiced our amazement to each other. Our sandwich, with bottled drinks, cost about $10.

This was no ordinary chicken salad sandwich. This was a monstrosity that I couldn't figure out how to get my hands around - even cut in half. Once the edge of a tomato was sliced, Grav dived into his half with gusto, momentarily forgetting the banana peppers. His eyes widened. Pieces of lettuce scattered everywhere. He managed to set his sandwich down enough to free a hand to put those peppers on.

"There's onion in this, but it's GOOD," he breathed in-between bites. Grav hates onions in chicken salad. He's not a fan of raw onion at all, but he was impressed.

I was more impressed by the fact he was picking this sandwich up. I had taken my fork and was eating the chicken salad spilling out of the sandwich, enjoying not only those onion bits but the very nicely seasoned chicken with its black pepper bits and the soft cranberries, too. It was a lovely, refreshing salad concoction that managed to be both savory and sweet at the same time. I like a good chicken salad, and this would rank in my top five (I think Daisy's Lunchbox might be my current favorite, and this was close but not in the same way). I picked at the sandwich with my fork, altenratinv with spearing up those cucumber cubes.

This was one sandwich. ONE sandwich. Two people. But by the time it was gone, I was satisfied. And, bonus, no longer hangry.

On our arrival, I had spotted round tins of cinnamon rolls on the shelves, and before we left I grabbed one covered in frosting and pecans to share with Hunter when we got home. Grav chose to get what appeared to be what we call Monkey Bread around these parts - which was here called Pluck-Its. We'd later rather enjoy both of these at home.

He also picked up a cylindrical pastry that turned out to be filled with cream cheese. I got a bit of this in the car before we went. It was rather sweet, which satisfied his need for sweet.

By the time we left, the place was packed. I suspect this is THE place for locals to dine in the area. Good for them - it's an excellent choice.

I don't find myself on the east side of mid-Mississippi much; in fact, this was the first time I had taken this particular route. But Grav and I have bookmarked it for the next time we find ourselves traveling in this direction.

If you're looking for it, find it on the west side of the juncture of US Highway 45 and US Highway 45 Alternate in Brooksville, Mississippi, along the access road. Feel free to drop in on the website for the place, too.