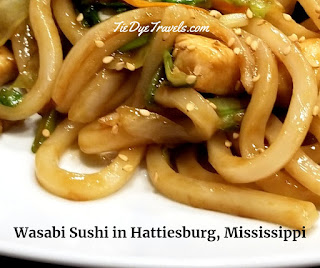 We travel across the region frequently and find places we love to dine at. Wasabi Sushi is going to be our go-to sushi and teppanyaki bar in Hattiesburg now, after a March visit that utterly charmed us.

You probably have noticed, I took a break from Tie Dye Travels. After 11 years and around 1200 posts, not to mention the heavy turn towards writing books, I needed a breather. I do plan to get back into things a bit better. Some of you might have noticed my recent, continuing work with AY Magazine as well. But yes, even I needed a break.

Grav has pretty much insisted I stop doing anything for several weeks as far as it's come to my professional life. I'm gearing up for bigger things (including the Arkansas Pie Festival on April 20th) but a break has been refreshing. Part of that break was attending Gulf Wars, a large event of around 3500 people held each year near Lumberton, Mississippi.

On opening day, we ran to town for a few supplies and a last night out before spending a week in garb (period clothing) on foot and in the midst of These Current Middle Ages. I wanted something more than burgers or pizza or fast food. I needed a good, sit-down meal. But it was getting late on a Saturday evening. Fortunately, we noted the lights were on at Wasabi Sushi, near Sams' Club. We stepped in and found ourselves in a diminutive, blue and tan painted restaurant with several fish tanks and just a few other customers.

We were served beverages in stemmed glasses and given a chance to choose our dinner (see menu photos below). Grav was craving fried udon something fierce, so his decision was quick. Mine, not so much, since I was really wanting a little bit of everything. The dinner bento would fit the bill.

Service was very quick. While Grav's dish was unaccompanied, mine came with both miso soup and a ginger dressing clad salad. This is pretty standard with American Japanese restaurants these days, but the miso was a really good start for me, considering the time on the road we'd spent. I loved the suede-like savory broth. Grav was appreciative of a ginger dressing that was more creamy than ginger.

We had just finished the pair when our waitress delivered our food. Grav dived into his hearty portion of chicken yaki udon, with both sauteed chicken and thick udon noodles in a very rich, clingy sauce. There wasn't a lot of sauce on the dish, but what there was clinged to both noodles and meat substantially. Strings of scallions and carrot enhanced the dish with a little crunch, and toasted sesame seeds brought the whole dish together. 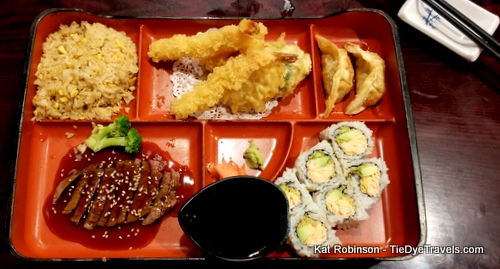 I was well pleased with my dinner bento, a fine selection of a little bit of everything. The lagniappe came in the form of two gyoza, delectable pork dumplings Grav absconded with, noting their nice strong flavor and juiciness. I was thrilled with both the sweet and savory ginger-garlic-sesame-brown sugar glaze on the beef teriyaki and its delicately thin slicing. The maki included was a good favorite, crunchy crab roll, a nice example. I was pleased with the tempura shrimp and vegetables, and the fried rice was almost as eggy as I wish (I like a LOT of egg). It was just sticky enough to pick up with my chopsticks.

The menu at Wasabi Sushi is thick, and I'm looking forward to trying one of the numerous hibachi dinners. I'm also interested in the Cindy Roll, a maki with shrimp tempura on the inside, covered in snow crab and honey eel sauce. I also noticed many of the rolls include crawfish.

You'll find Wasabi Sushi in the parking lot of Sam's Club on the west side of Hattiesburg. It's open every day except Wednesday for lunch and dinner, except there's no lunch on Monday. It bills itself as a Chinese restaurant, and does include dishes such as General Tso's chicken and honey chicken as well. 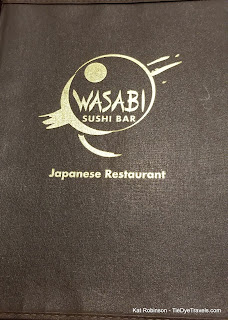 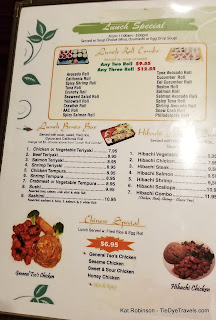 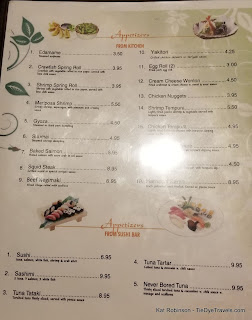 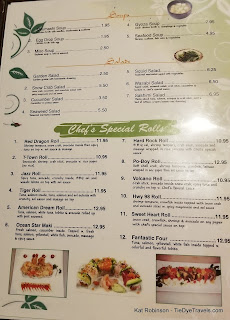 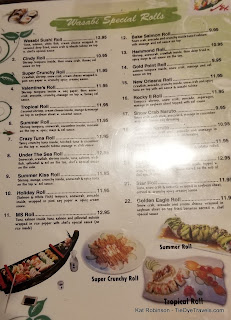 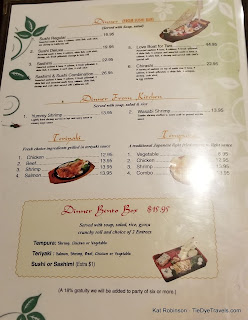 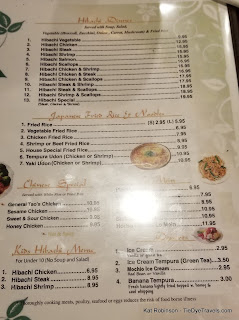 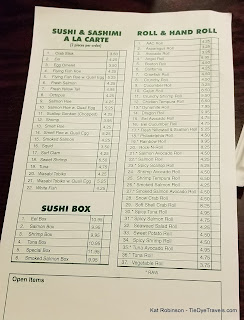 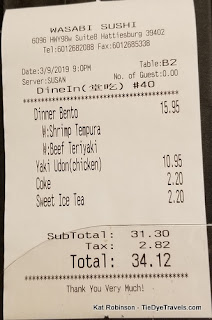