Patrick's Burgers Remind Me of What Burgers Should Be. 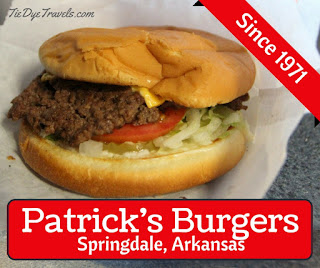 A visit to the local classic in Springdale means sliding off the beaten path, entering a world dedicated to local sports fans, and forgetting any sort of cynicism about the direction the humble burger has taken lately. I'm really glad I found my way to Patrick's.

I'm also disappointed in myself for not mentioning this brightly painted joint at the corner of 40th and Elm Springs in Classic Eateries of the Ozarks and Arkansas River Valley. I can blame only myself - though I have dined on hundreds - I am not kidding you, HUNDREDS - of different burgers around Arkansas, somehow I missed this lovely place with the tiny parking lot that's apparently the northern destination of Razorback burger lovers.

Patrick's reminds me much of my beloved Feltner's Whatta-Burger, and indeed they share some similarities. Both have been serving their communities a long time, both have eclectic decor and both offer a griddle-cooked burger of renown. But while Feltner's wood, green and yellow pride-filled retaurant is packed and often crowded, Patrick's is open and inviting with plenty of room for moving around... once you get past the front counter, that is. 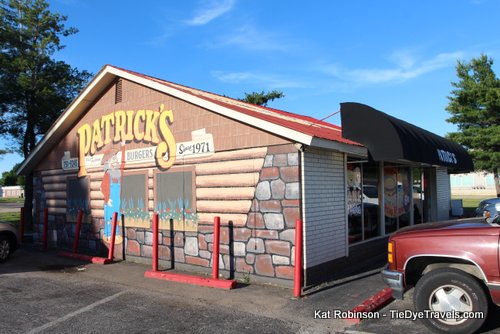 I was doddling around Springdale Wednesday night after dining at Mama Z's in nearby Tontitown, out looking, I will admit, for Pokestops. It was late, I was bored, I wasn't pleased with my hotel and hey, Pokemon Go. I had finished downtown and was just riding around and spotted the place and remembered - hey, I planned to write about that. Of course by this point it was after nine at night and it was closed. 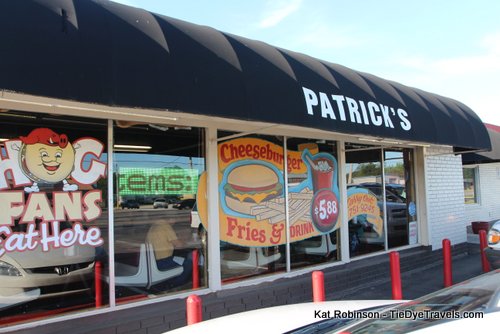 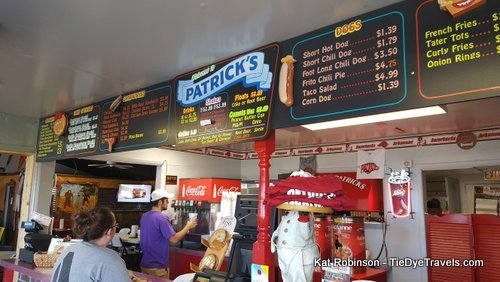 On entry, there's a long counter with an even longer menu board overhead (that even bends and goes overhead on the right-hand wall) that covers burgers, fries, shakes, Frito chili pies, hot dogs, footlongs and such. I really didn't need to pay attention to that at all. Once I'd noticed the $5.88 Cheeseburger Combo painted on the outside window, I knew what I was going to have to eat. 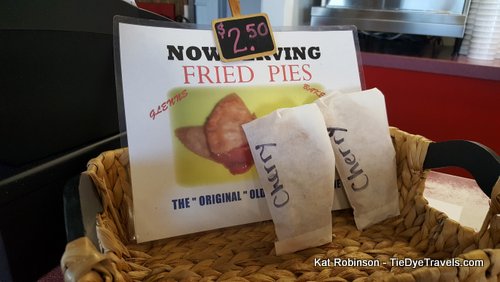 I placed my order, got a number and went to sit in the cavernous dining room, noting beforehand the basket of Glenn's Bakery fried pies (just two cherry pies left) on the counter as I passed. A large painting of anthropomorphized area football mascots was nailed to the wall in a place of honor. Other murals depicted food-enhanced reimagining of pop culture - including a French fry world Wizard of Oz and a sausage-added version of American Gothic. 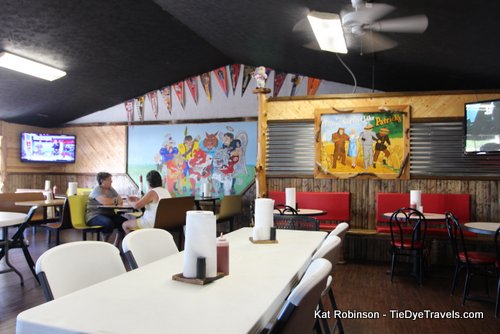 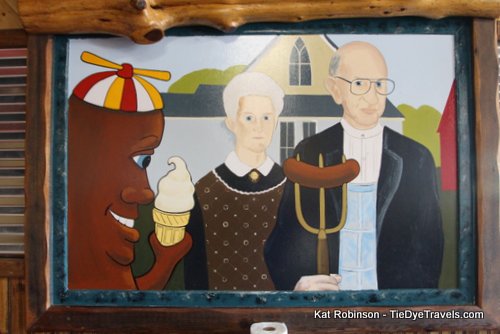 So... I was surprised to find very little about Patrick's Burgers listed anywhere on my phone or whatall. I knew it was a generational place and that the fourth generation of a family ran the place. A Google search brought up little about the Springdale restaurant and much about the similar Patrick's Butcher Boy Burgers out of Fort Smith - a Bubbus family operation connected to David's and CJ's, equally as good but not what I'm talking about here. I decided heck with it, I was here for dinner and not an in-depth report. 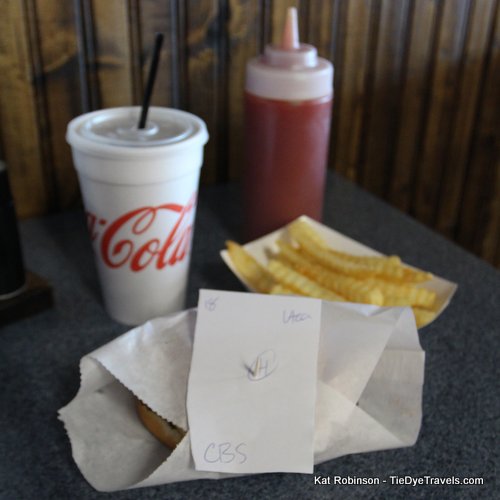 It took less than 10 minutes for my burger and fries to arrive at the table. The fries were piping hot and - yes, I'll admit this - crinkle cut and irrestistable to me. I just LIKE a crinkle-cut fry, with all those crispy surfaces just crying out for the good ketchup. They were fresh out of the fryer and soft on the inside, crispy but not hard on the outside and ah yeah that's how I like them. 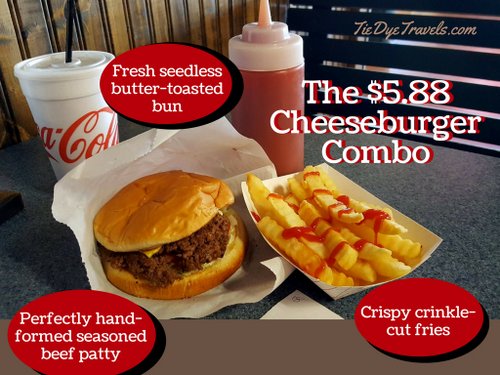 The burger won me over the moment I pulled the toothpick out of the wax paper and opened it up. The fragrant, well-seasoned meat was very obviously hand-patted and moist. The slice of cheese hadn't even melted yet - though it would within the next minute or so. Ample slices of tomato graced the bottom, with a few ridged dill slices, a little iceberg lettuce and a little white onion. A very thin layer of mayo on the bottom and an equally thin layer of mustard on the top offered flavor but not a goopy mess. 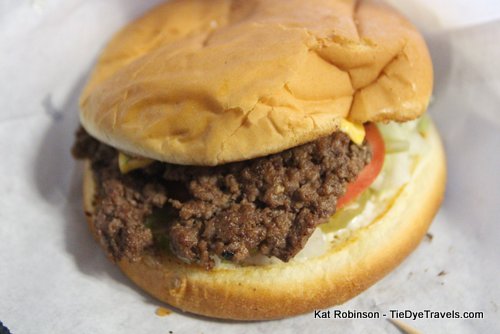 And when I bit into that burger and felt the pliant crunch of butter-toasted bun, the crisp of the lettuce and onion and the substantial but not touch burger patty, I sighed. No squeezing the tar out of a fat pub burger to fit a bite in my mouth. No exotic or weird ingredients. This was just a pure, classic smashy that probably tasted no different from a burger created in the same place in 1971, the year the joint opened. 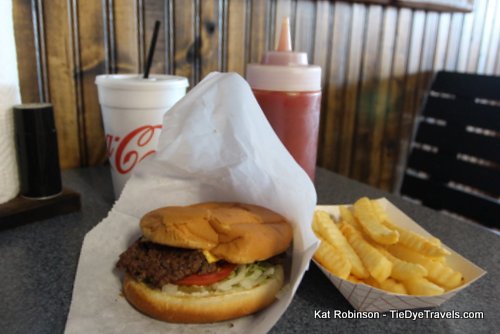 Mind you, there weren't a lot of people my age or even 20-somethings or teenagers in the place, not unless you count the staff. The folks that were taking their ease at Patrick's that Thursday night were older and they'd brought grandkids and nieces and nephews with them. I realized those young-uns won't have a clue what they were eating was perfectly performed classic American dairy bar food. More's the pity.

You'll find Patrick's Burgers at 40th and Elm Springs Road in Springdale. It's open 10 a.m.-8 p.m. Monday through Saturday and closed on Sunday. There's a menu on the website - and, if you can't be bothered to make it over, Chef Shuttle is available.