The Milder Marinara is at Mama Z's in Tontitown. 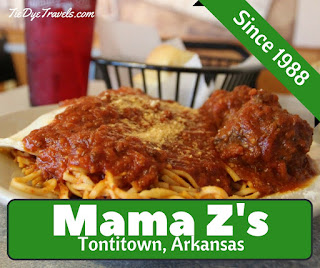 The northwest Arkansas city of Tontitown is where the Ozark traditionn of fried chicken and spaghetti took off. Today, two restaurants carry that tradition onwards - and of the two, Mama Z's is definitely the more mild.


Not that I won't still recommend the venerable Venesian Inn down the street, with its spicy sauce. Mama Z's, however, has its own charms.

You may recall I mentioned this place, both in my first book, Arkansas Pie: A Delicious Slice of the Natural State, and in my second, Classic Eateries of the Ozarks and Arkansas River Valley. Indeed, the quick bite in the latter book mentioned the restaurant's claim to being registered amongst the classics of the region. 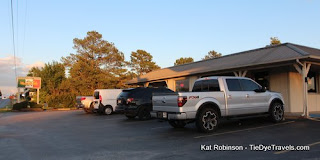 But that doesn't give you much to go on when you're searching for a bite to eat. So here's a bit more.

I've been to Mama Z's several times over the years, and my most recent 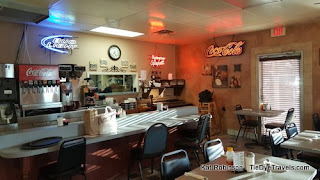 visit last night was typical of them all. For some reason I always end up in the same spot - facing the mural at a table close to the kitchen. I don't think anyone's doing it for any particular reason, it's just how things are. 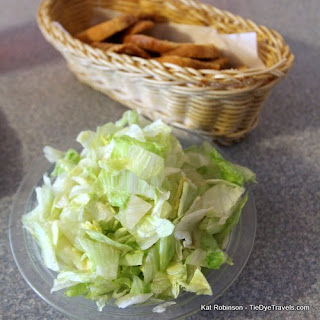 I came in on this particular Wednesday night, dallied over the menu and ordered what I normally get - the Special Italian Plate. My waitress brought me the salad - er, pile of shredded lettuce - with a couple of packages of salad dressing and a basket of crouton slices and crackers. It's a bit of a tease, very light and very typical of the area. 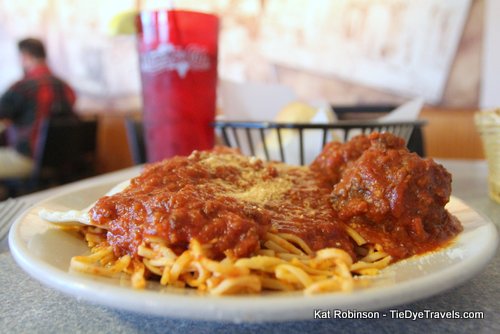 Then out came my dinner, delivered with the announcement of a single fat roll. This dinner took up an entire plate - two palm-sized chicken-filled ravioli, two fat meatballs, a pile of spaghetti noodles all under a beefy marinara. 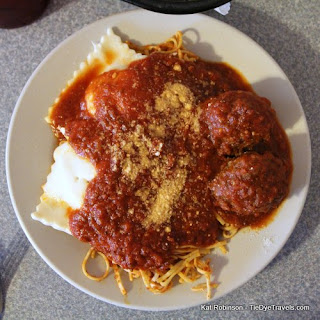 Well, that's it. That's really it. I took my photos and dug in to my warm but not hot plate of pasta. The meatballs were sage-heavy - definitely a family recipe - and the ravioli were so very, very mild. Very mild. As in, hardly any spice at all.

But they were substantial. The plate didn't look all that large but dadgummit, I couldn't eat more than half of what was in front of me. It was just... deceptively heavy and filling. I took the rest back with me for breakfast (thank heavens I had that!) and felt good about it.

What I didn't have was dessert. Where would I have put it?

Which leads me to the tale of an earlier visit - almost six years earlier, to be precise. Grav and I were on a sweep through the northwest corridor, collecting pie stories for my upcoming piece on pie in Arkansas for the Arkansas Times. And while I'd dined at Mama Z's before, I had not had the pie - for precisely the same reason I didn't have pie last night - I was full.

At the time, Grav was going through a vegetarian stage, and we'd been going place to place with him griping that every Italian restaurant had only one thing for him - fettuccini alfredo. He was griping about this and I was about done with it. We get in, find out the menu didn't mention the meat-free marinaria I now know about - and he gripes. 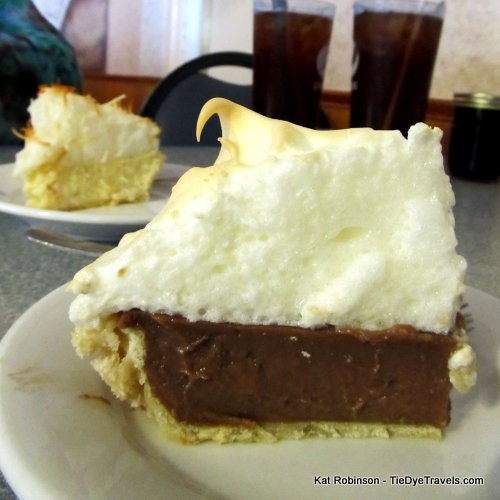 So he gets pie. WE get pie. Two slices - coconut and chocolate. And they're delivered to us with a silly grin. It is 11 in the morning and our waitress finds it funny that we're only getting pie.

It wasn't silly at all. Because those pies... 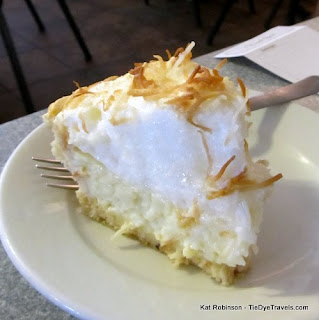 Well, they're meringue pies, and they're fluffy. Light. The coconut meringue pie in particuar was magnificent, with just the right caramelization on the top of the meringue and just the right balance of very creamy custard below. The chocolate pie was about a meal in itself with it heavier custard. I was pleased.

Moreso, Grav was pleased and he got over being hangry about things. We dined at six other restaurants that day - I kid you not - but it was the pie at Mama Z's that put a smile back on his face. 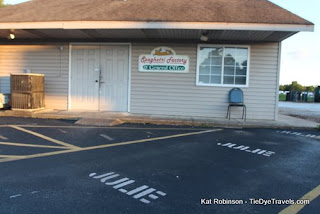 Now, I mention Mama Z's sauce is mild because I know there are some folks who think the sauce at the Venesian Inn is just too spicy. What I haven't mentioned yet are the pastas themselve - all hand-made on site in a building at the back of the property. Some folks have voiced the opinion that the pasta must be overcooked since it's so soft. It's not that it's soft. It's that it's fresh. It is lovely. And it is filling. Best of all, it's also on sale at the front of the restaurant.

So next time you venture into Tontitown, do yourself a favor and stop in at Mama Z's. The prices aren't bad, and the food is filling. And hey, you can get that pie to go. For more information, check out the Facebook page. 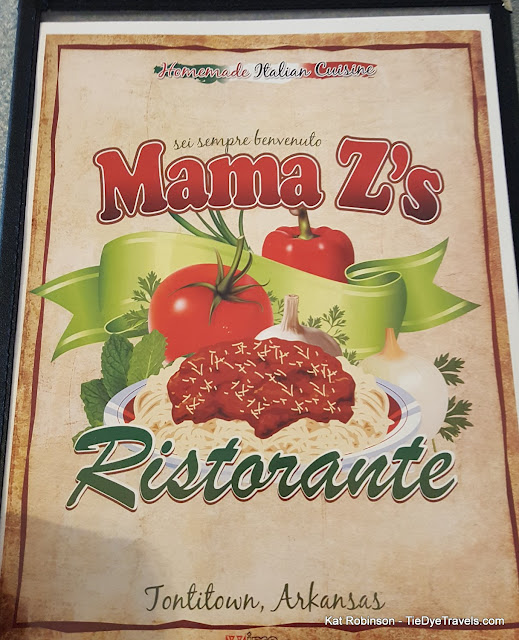 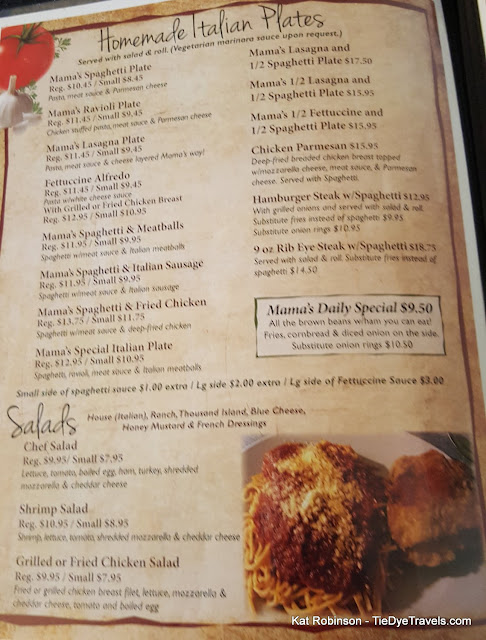 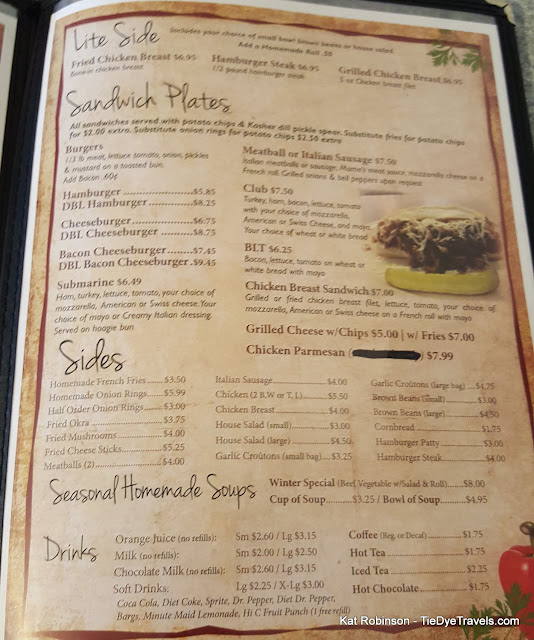 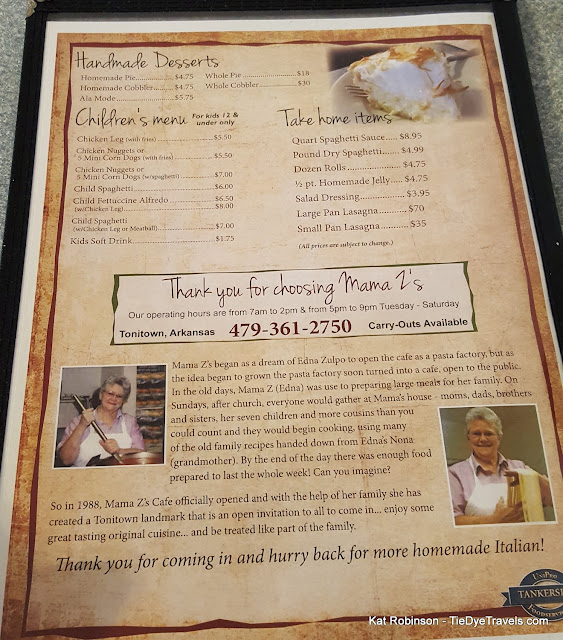