Taco Pronto is 47 Years Old and Now I've Tried It. 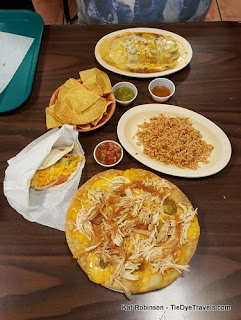 Sometime the research I do in my never-ending quest to chronicle Arkansas food is fantastic. Sometimes it's not. And sometimes I get mixed results. That seems to be the verdict on Taco Pronto, a Hot Spring mainstay serving up quick, cheap eats since 1969.

I've been thinking hard on Taco Pronto since the end of December, when Grav and I were doing some Hot Springs area stories and stayed at the Hampton Inn behind the place. Our plan to visit one evening was disrupted by a strong thunderstorm that discouraged us heading out to give the place a shot. Though I've been back to Hot Springs since, opportunity to try the place had been sparse. 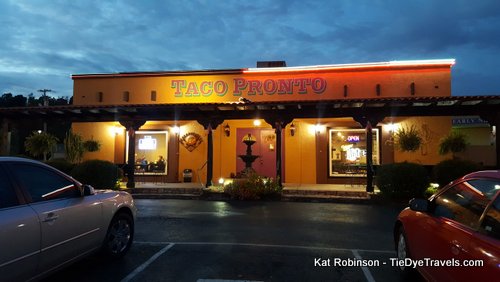 But Saturday night we were already in town to deliver new Arkansas ornaments to the All About Arkansas store that features Grav's work. With nothing else to do and hunger growing in our bellies, we decided hey, let's go try that little place down Central Avenue. 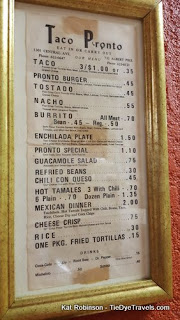 Taco Pronto is one of those community Tex-Mex restaurants that came about in the desire to get those flavors into local markets... er, let me make that a little clearer. There were a lot of Mexican restaurants that flourished in the post World War II years. Many of them, including Browning's and Casa Bonita in Little Rock and El Cena Casa in Benton, were well known for their atmosphere. Others, like Taco Villa in Russellville, Taco Rio in Paragould and Taco Kid in Little Rock, fell into the category of fast food and became nostalgic favorites later down the line. Chains such as Taco Bell and Taco Bueno have done their utmost to knock these operations out of business - and that's happened, a lot. For those that survived, longevity breeds their own crowds. 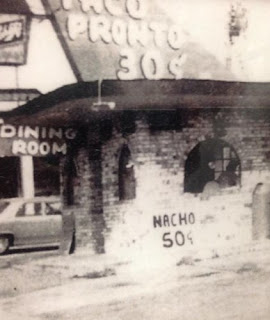 Walker Murray opened Taco Pronto, the first one, in 1969, and at one point had three locations around the Spa City. Times have passed and two locations are gone, but the family still runs the little shop on Central Avenue close to the lake, this little brightly-painted box with its impossibly cheap menu and old-fashioned ordering station within. There's not a lot of memorabilia inside (save a single menu from back-in-the-day) but what's there might have been on the walls in 1978 or 1992. It is veritably unchanged, save for fresh paint jobs and new prices.

The prices are still butt-cheap, still comparable to other fast food restaurants. All the expected favorites are there - burritos and tacos and tamales and enchiladas. Taco Pronto's one claim to fame lies in its Cheese Crisp, which I will get to shortly. 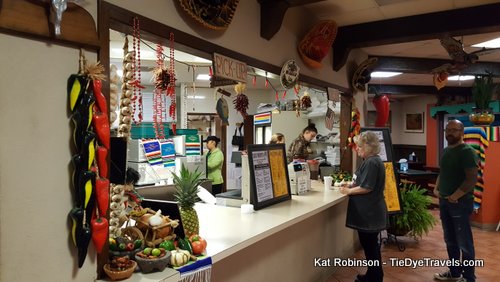 We arrived and entered and stared at the menus on a post in the center of the restaurant, quietly conversing between each other. We do this a lot. We talk about what we're going to get and share so we don't duplicate - so we can sample more on less. This didn't look to be a problem, though, since everything looked really cheap. Our choices made, I went and ordered a chili and cheese covered combo burrito, a soft taco, a chicken cheese crisp, an order of refried beans, a side of tortilla chips, a Coke and a glass of water, which ran all of $22.33. 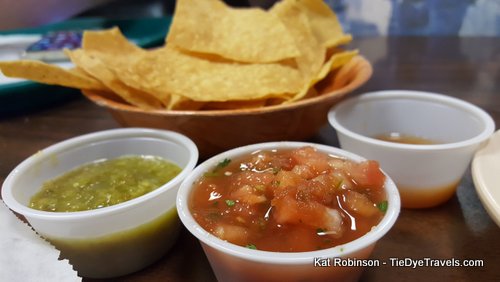 Like a lot of these places, we got a slip with a number and when the order was called Grav went and got it from the counter. I took the time to utilize a small station and load three small cups with the three offered salsas - which turned out to be a pretty traditional pico de gallo, a hot green tomatillo sauce and something I never really did figure out, something watery but not hot. In hindsight, this may have been some separated hot sauce I didn't shake up enough before utilizing. 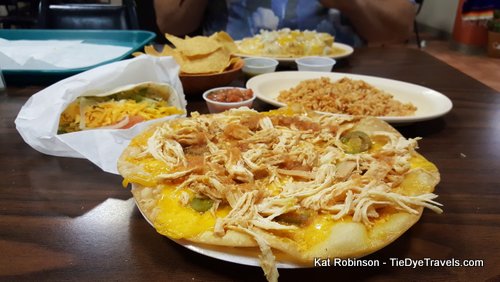 We'd ordered a tableful of food. I debated momentarily whether to return the Mexican rice that was supposed to be refried beans, but there was now a line and I was hungry and there was food to shoot. And away we shot. 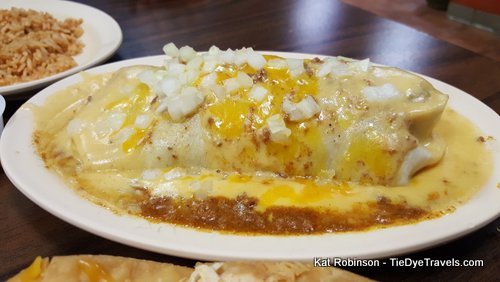 Because we shoot across, I got a chance to sample the cheese dip that covered Grav's burrito before he did. Suddenly, I was back at the old El Cena Casa in Benton, dipping my finger into the cheese sauce that covered a mass of brown on a plate that might have hidden an enchilada or two. Cheese SAUCE, not dip. As in El Churrito from the grocery store sauce. As in... not cheese dip. Gah, how to elaborate?  Cheese GRAVY. I could taste the flour. 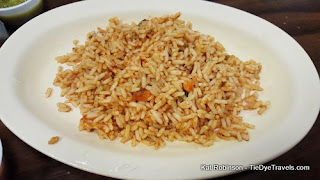 Okay, so food time. I took a bite of unremarkable Mexican rice, reminding myself the side item was just 95 cents. I sampled and winced at the green sauce. I grabbed the soft taco, bit in, thought of how similar it was to the same dish at Taco Villa in 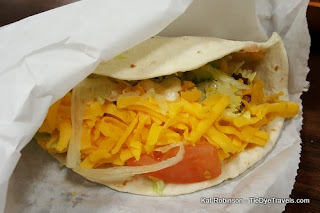 Russellville then poured pico into its open end and ate more. We were hungry.

And Grav was doing the same with his burrito, griping all along that no, he never really cares for chili and cheese on anything, that's a thing I like, and I heard him wrong but by golly he's going to eat this burrito. And he does. 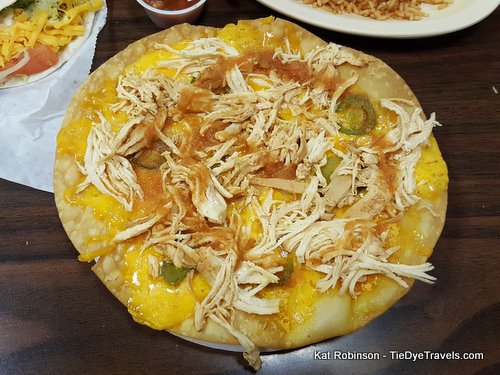 It all feels sorta there, like the sort of meal you eat when there's nothing else in the market but you need a bite, until I got to the chicken cheese crisp. And, I don't know, I just really dug it. Fried tortilla with melted cheese and jalapenos and strings of chicken breast. I wished at that very moment that I hadn't ordered anything else, because that crisp was all I wanted. All I wanted.

I suspected at that moment that this singular item, added to low prices, is what kept this place afloat all these years. I wanted a version of it without the jalapenos and chicken but with chunks of apple on it. I re-evaluated my life choices and made peace with them.

Grav? Wasn't so fortunate. I knew he'd been sensitive in the previous days but that burrito was not his friend. And while I was lauding the crisp on the way home he was lamenting that burrito. Never again, said he. Will order again, said I. 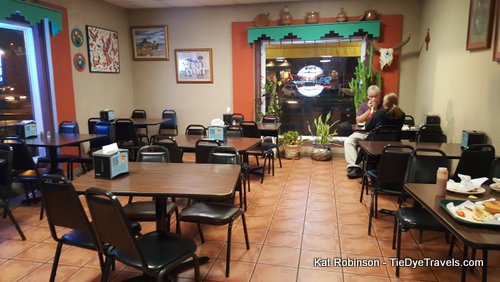 Taco Pronto keeps a pretty steady clientele, and it looks like one of those great places to go when your budget is tight and you have a crowd. I kinda want to go back and try a Pronto Burger so I can compare it to the Taco Rio Burger, but that may be a little while in coming. 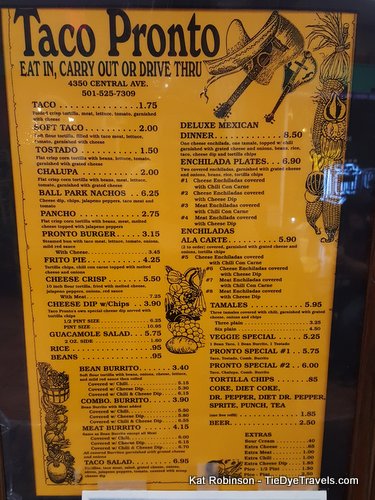 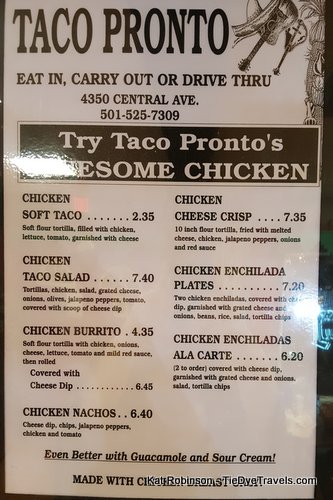 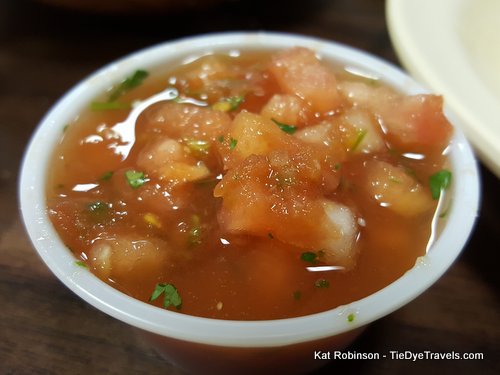 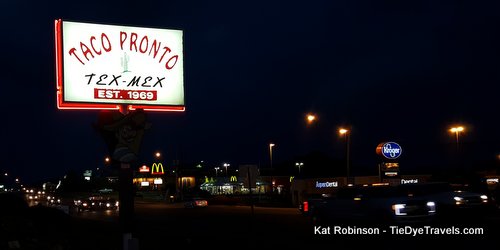 If you're looking for another option for Tex-Mex and want my suggestion, go with Taco Mama.