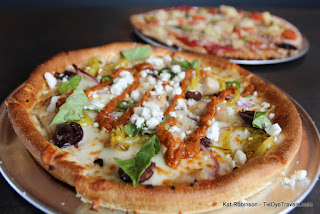 I get a lot of requests to cover chain restaurants, but I tend to defer to other food bloggers in Central Arkansas to cover the,  This time, though, I was curious about a single idea -- a pizza joint that can take your pizza order and make it in five minutes.

Seriously, this is a thing.  That's why Grav and I headed out to Pie Five Pizza in Benton Wednesday.  The restaurant was running a testing session before Friday's grand opening, which meant we had an advance opportunity to figure out -- is five minute pizza for real?

Pie Five Pizza has around a short while, but it has some deep roots. Its parent company, RAVE Restaurant Group, Inc. owns Pizza Inn (and for disclosure's sake, I'll mention here that I once delivered pizza for the Russellville Pizza Inn location, now a fire station). Between the two pizza franchises, RAVE has some 300 restaurants inside and outside the United States. Pie Five Pizza operates in 19 states. Benton's location, the first in Arkansas, is number 73.

This operation's here thanks to Rob Byford, who brought Slim Chickens to Central Arkansas. I spoke with Matt Runnells, who gave Grav and I the grand tour while in the midst of a VERY busy pre-event. Byford and Michael Jett have worked to bring restaurants to this market over the past 20 years, and Runnells has extensive Central Arkansas experience, including a sting with Performance Food Group.

The shop's mostly front - a gigantic red, black and wood accented dining room with a counter line to one side. With the exception of a smaller prep, wash and storage area in the back, all the action is at the end of the dining
room behind the counter. On Wednesday, with dozens of people showing up to try the place out, up to a dozen manned the counter, each quickly assembling and creating the pies.

It’s called Pie Five because each pizza takes just five minutes to make - that’s assembly, bake time (2:25), sliced and serve. We had to try it out.

I'll go ahead and mentioned, that five minutes is from when the order begins.  When you have a crowd like we did, it may take a few minutes to get to the front.  But it was pretty swift. 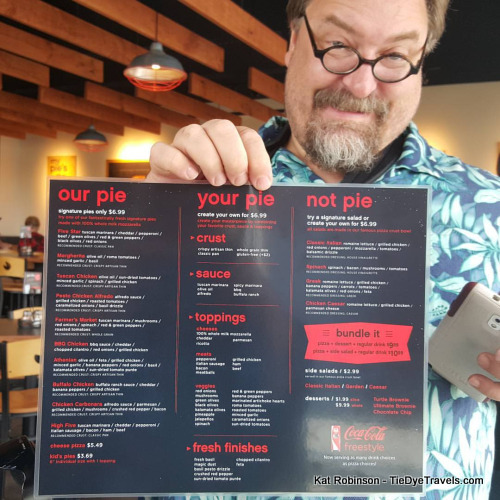 There are menus at the front for your perusal, as Grav demonstrates here.  This also speeds up the process.  Yes, there are a lot of different toppings, and technically you could order them all, but that's sure a lot of toppings for one crazy pizza.

Once we got through the line, ordering went swiftly... with one exception.  Since we were trying out all of the pies, we ordered a gluten free pie -- and that took more time because of the extraordinary precautions Pie Five Pizza takes with each gluten-free crust.  Those crusts are the only crusts at this location that aren't made in-house.  Instead, they're shipped in, individually wrapped.  When a gluten free pie is ordered, the person taking that order strips their gloves, goes and washes their hands for 30 seconds, returns, dons fresh gloves, opens a plastic-wrapped gluten-free crust, places it on a gluten-free only screen and assembles it without coming into contact with gluten items.  Everything that goes on the pizza is gluten-free (except meatballs) and when it comes out of the oven, it's sliced at a separate station and boxed so it never comes into contact with gluten.  Neat.  Here's a video.


As I mentioned, all the pies are made with whatever toppings you want.  For testing sake, Grav and I tried a couple of the signature pies and a couple of make-your-own, choosing a different crust for each one. 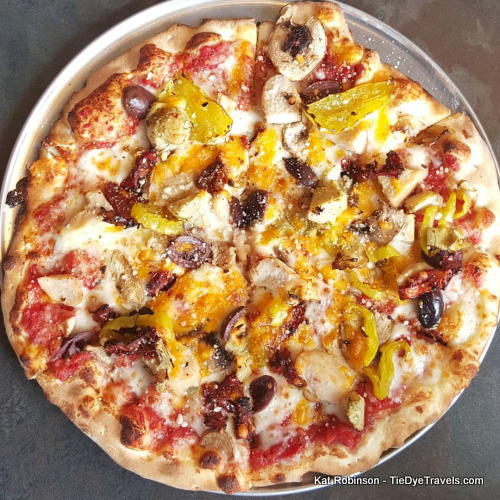 First Pie Five Pizza we tried was a make-your-own from Grav on Artisan thin with kalamata olives, banana peppers, chicken, sun-dried tomatoes, mushrooms, cheddar cheese and artichoke hearts on a Tuscan marinara sauce. The Artisan thin crust is very, very thin and comes very close to a saltine cracker in flavor. Thanks to Grav’s choice of toppings, this pie was also very salty. 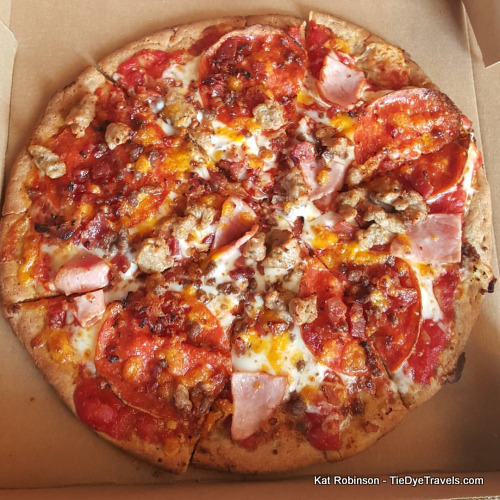 Our second pizza was the High Five on a gluten free crust. You will notice it is in a box. The pizza makers took extreme measures, with Grav’s pizza guy removing his gloves, washing his hands for 30 seconds, pulling out a wrap separate gluten- free crust and putting it on a separate clean screen, donning fresh gloves and taking great pains not to come into contact with anything containing gluten. For grins, Grav got his High Five, which includes cheddar, pepperoni, Italian sausage, bacon, ham, & beef with spicy marinara sauce instead of the Tuscan marinara, and had extra bacon added. He said he preferred the gluten free crust to the thin crust. This pie made him sweat. It was also his favorite. 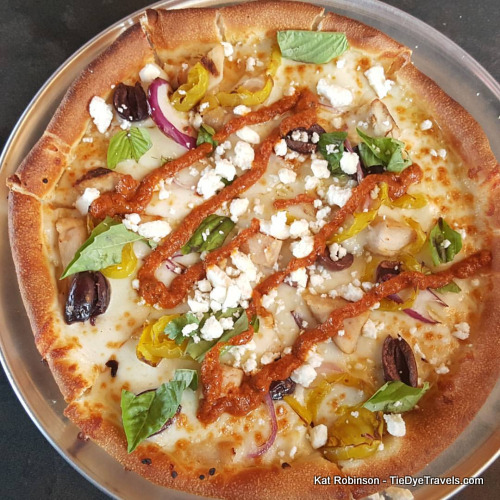 The third pie we sampled was the Athenian on classic pan crust. I was told by our pizza maker that this was the first Athenian he had made on this crust. It’s a cheese blend, chicken, kalamata olives, mince garlic, banana peppers, red onions, basil, sun-dried tomato puree and feta cheese on an olive oil swept crust. I really liked this one, and I'll probably order it again. 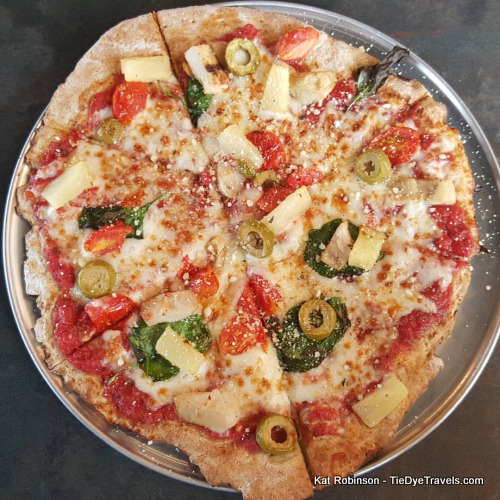 For number four, I went for my favorite toppings and got chicken, pineapple, roasted tomatoes, green olives, spinach leaves and Tuscan marinara on a whole wheat crust.  While the crust wasn't really all that special, I loved the toppings. 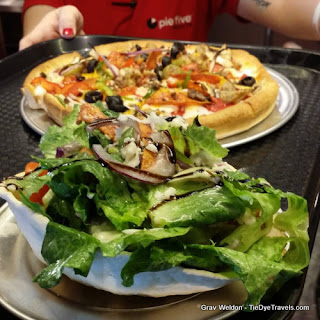 bowls are edible -- they're made from a similar crust of the Artisan Thin, except baked in a bowl shape with olive oil and salt. They come out similar to a saltine cracker.  The salads include a Greek, Classic Italian, Spinach and Classic Caesar.

And then there's the desserts.  In particular, the brownies caught our attention.  They're created especially to bake in the special proprietary ovens 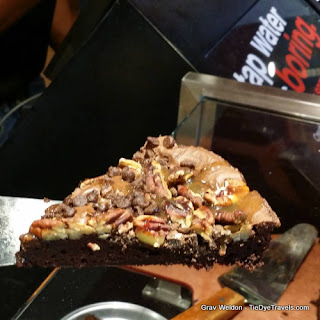 that cook everything that goes through them at 595 degrees for 2:25.  This made the turtle brownie we tried especially gooey on the inside and very crisp on the outside.

Pie Five Pizza also has one of those cool programmable Coke Freestyle machines that can make special recipes like Vanilla Root Beer Float and Dreamsicle... and, better for me, both unsweetened black tea and unsweetened Ginger Peach green tea. Sweet!  Or not... ya, you know what I mean.

The new Pie Five Pizza is the first of eight locations expected to be opened in Arkansas in the near future.  It's quick, there are a good variety of toppings and the interior is nice.  The music's pretty sweet, too.  If you'd like more information, check out the location's website here. It's located in the Hurricane Creek Shopping Center behind Academy Sports off the Alcoa Road exit on I-30 (near the new Kroger).  Enjoy.

Oh, and join the Circle of Crust for free pizza.