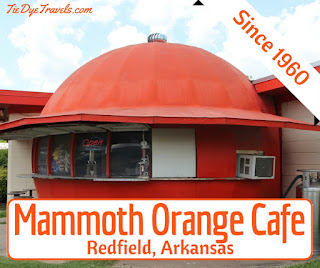 A little town along Highway 365 may not be known for much, but for roadside travel buffs, it's a must-stop - just because of a strange orange orb at the town's major crossroads. Let's take a look inside the Mammoth Orange Cafe.


There's honestly no place quite like this place, at least, not in Arkansas. Though it's sparked a quickly growing Arkansas burger franchise, the tiny dairy bar hasn't grown much in years. Yes, it's bigger than it started out. How did this place come to be?

Ernestine Bradshaw opened the original round orange building in the 1960s. She had lived in California before moving to Arkansas and was inspired to have a small dairy stand such as the many she’d seen there. Most of the orange stands she had found in California were either built by or inspired by the creations of Frank E. Pohl, who opened his first orange-shaped stand in 1926.

Singular in Arkansas, the Mammoth Orange Café eventually grew with the addition of a cinder block structure at its rear to accommodate dine-in customers.  The original fare sold here was orange juice, ice cream and burgers. 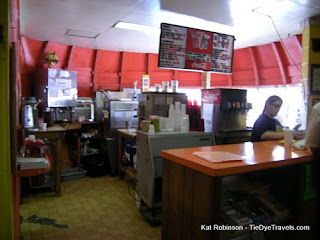 Ms. Ernestine ran the restaurant until her death in 2007. Her daughter, Cynthia Carter, runs it today (UPDATE:  Cynthia Carter passed away in January 2017. Cynthia's son Jock Carter now runs the Mammoth Orange).  The menu is a bit more broad now (a full kitchen was part of the addition), including hamburger steak with gravy, burgers and chicken sandwiches, catfish on Fridays and of course ice cream delights. 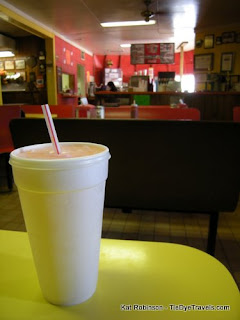 Strangely enough, orange juice isn't part of the regular menu, nor is a proprietary orange soda. Instead, the orange here is good old-fashioned Fanta from the sane Coca-Cola fountain machine. That doesn't take the charm out of ordering a cold orange drink here. 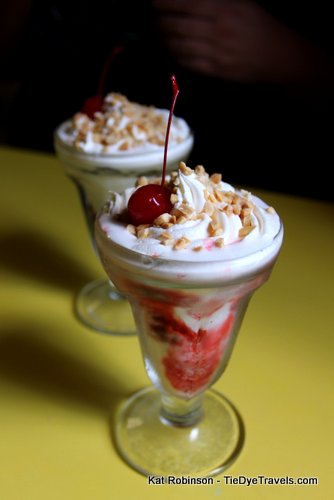 Hunter, Grav and I came through on a recent Saturday on our way back from Pine Bluff - to cool off with something creamy. We enjoyed amazing sundaes served in glass - which was marvelous, since the extremely hot day would melt just about anything in reach. Hunter went for cherry, while I chose strawberry and Grav went for a chocolate fudge nut sundae. Good times.

If you go, take cash; the Mammoth Orange Café has never taken credit or debit.

For more information, check out the restaurant's Facebook page. 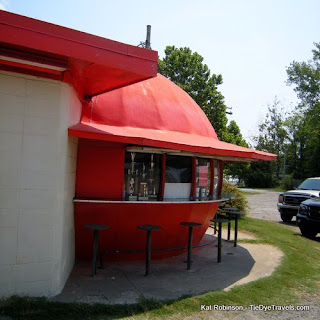 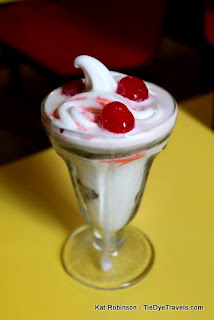